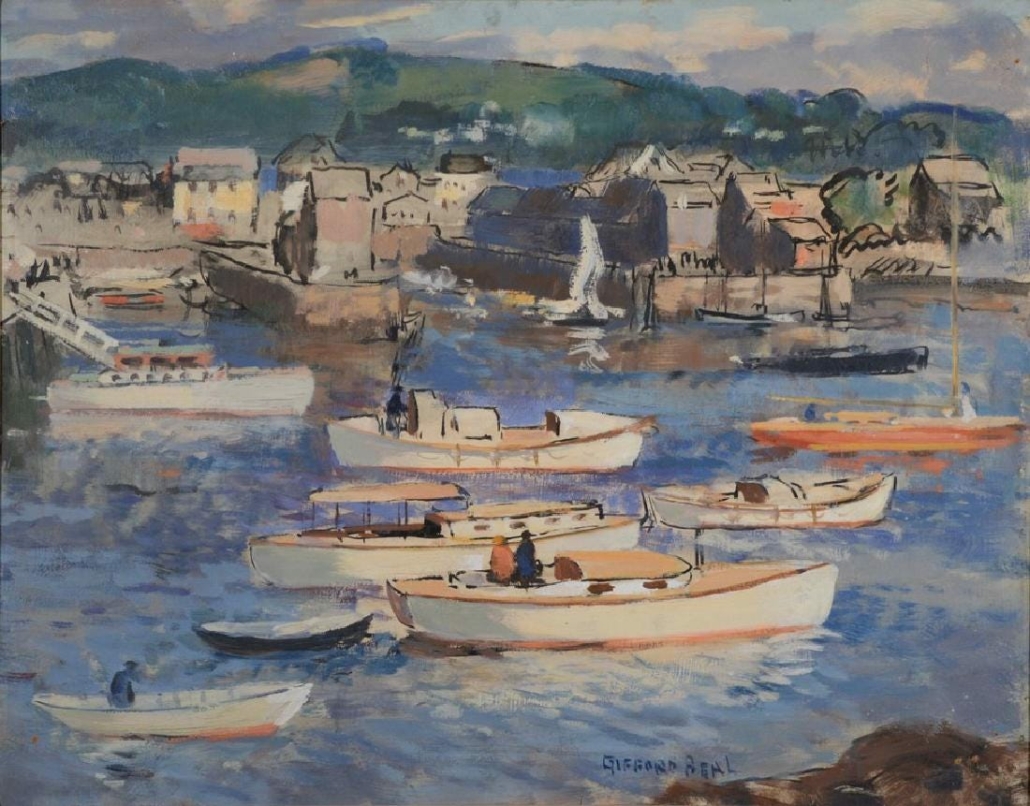 Gifford Beal’s oil on Masonite of Rockport Harbor brought $5,500 plus the buyer’s premium in January 2018 at Nadeau’s Auction Gallery.

NEW YORK — While Cape Cod is better known as a tourist destination, Cape Ann has cemented its own legacy in the art world. About an hour’s drive north of Boston, Cape Ann juts out from Massachusetts on the Atlantic Ocean and demarcates the northern edges of Massachusetts Bay. The rocky cape has attracted legions of artists for more than 150 years and still enjoys a rich and diverse tradition in art-making.

Printmakers and Impressionists, modern and abstract painters, and nearly every other type of artist has succumbed to the lure of Cape Ann. Its striking oceanside scenery, busy harbors in Gloucester and Rockport; and the unique interplay of light on water there have inspired many, starting with one of its own, luminist painter Fitz Henry Lane, also known as Fitz Hugh Lane (1804-1865). Born in Gloucester as Nathaniel Rogers Lane, he descended from a family that was among Cape Ann’s first settlers. His coastal paintings helped establish Cape Ann’s importance. By the 1840s, railroad lines had opened the area to tourists and others drawn to its beautiful vistas. In 1921, a group of artists established the Rockport Art Association, now one of the oldest art colonies in the United States. Its traditions became known as the Cape Ann School. 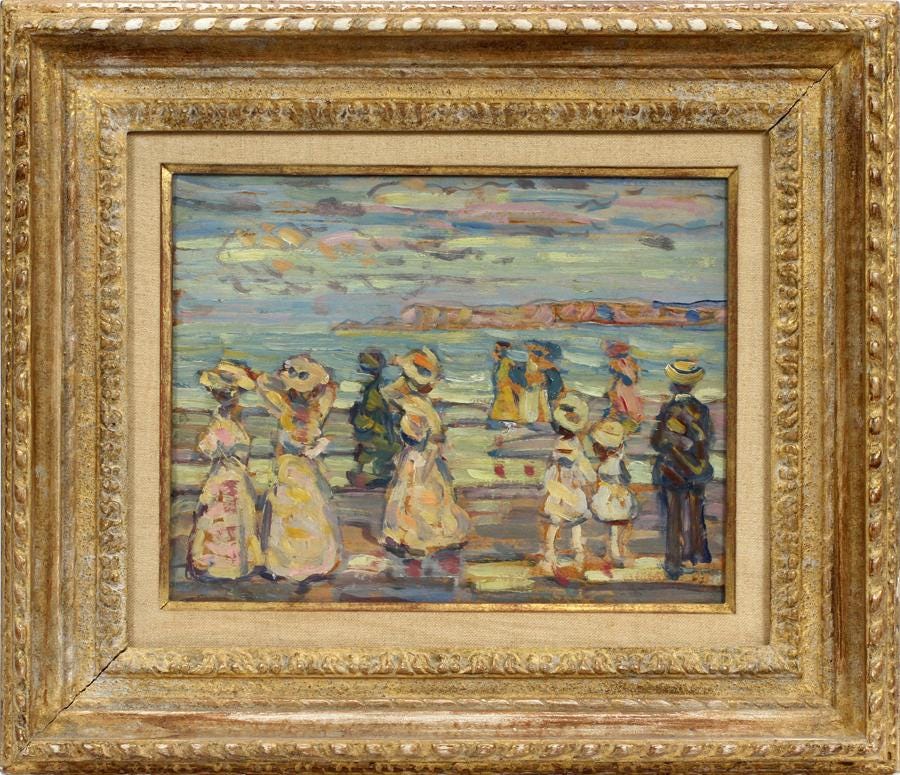 Any authoritative list of artists associated with Cape Ann would be too exhaustive to contemplate, let alone assemble. Some were Massachusetts natives who chose Cape Ann as their summer or year-round home, while others made pilgrimages from elsewhere to paint en plein air. Favored subjects included bustling harbors, waves crashing on the shore, salt marshes, fog rolling in, sailing ships, rocky beaches, and fisherman hauling in the day’s catch, as well as surrounding woodlands, cottage gardens in riotous color, and pastoral scenes. Interestingly, as each generation of amateur and professional artists rose to claim Cape Ann for their own, the environment influenced them in turn, shaping their technique and style of painting. 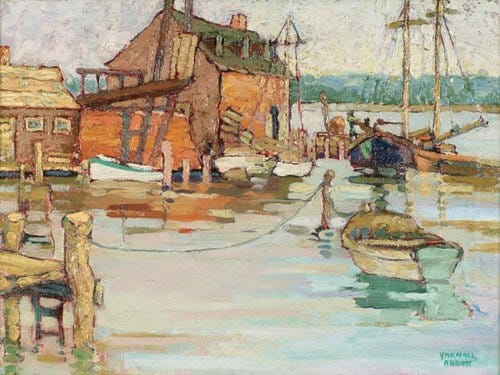 Cape Ann artwork is, of course, distinguished by marine scenes, such as Yarnall Abbott’s oil painting ‘Fishing Boats in a Harbor.’

Milton Avery (1885-1965) ranks among the region’s best-known names. “Avery’s art underwent a dramatic change during his years on Cape Ann,” according to the Cape Ann Museum website. At first, his style reflected that of the Impressionists, but abstraction and a move towards pared-down shapes and solid blocks of color informed his later work. The 1957 oil on canvas Birds Over Sea is evocative of his mature period; Avery built a picture that united shapes, spaces and colors to form a network of relationships. “There is a tremendous sense of order, color, and space that occurs from his many years of exploring paint, brush, and its effects on canvas,” according to Brunk Auctions’s catalog description for the painting, which it sold for $1.4 million plus the buyer’s premium in October 2020. 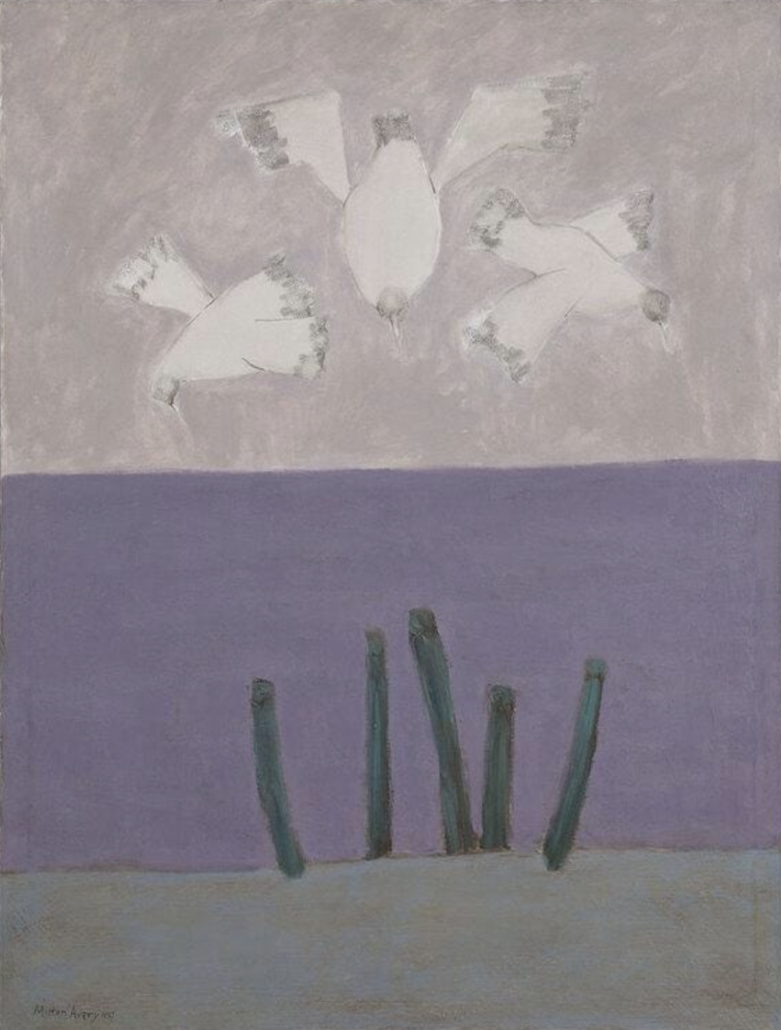 Reynolds Beal (1866 –1951) and his younger brother, Gifford Beal (1879-1956) both found the Cape Ann area compelling and moved from their native New York City, where they were born and raised. Reynolds had a studio overlooking Rockport’s inner harbor and he often created many works of art depicting the harbors and Gifford had a penchant for painting landscapes as well as scenes of working fishermen. 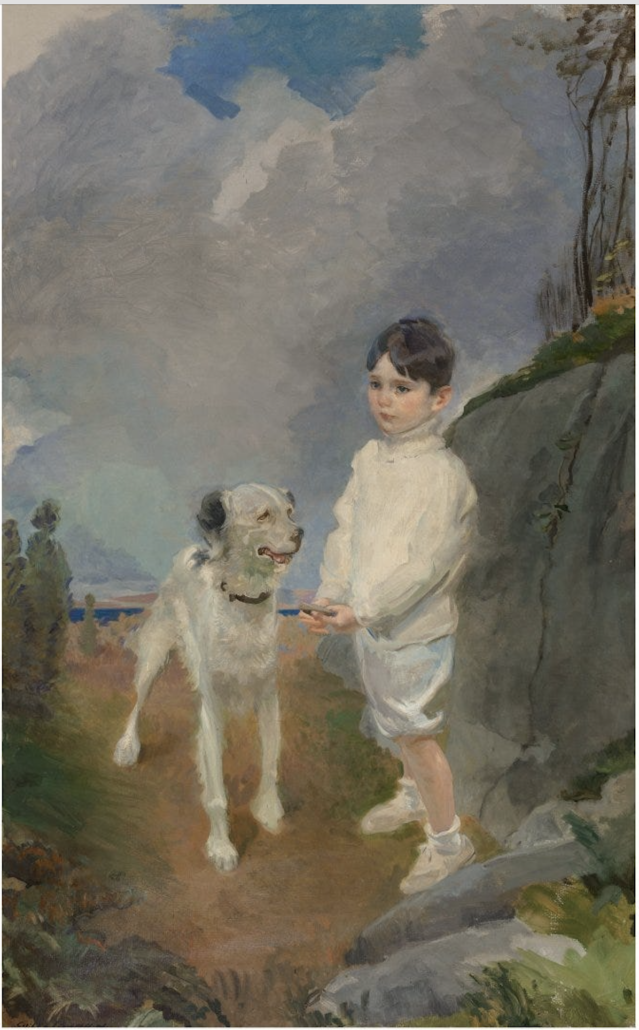 While most of the notable artists in Cape Ann in the late 19th- and early 20th century were men, academy-trained women painters secured their rightful place in art history, and their work has become quite collectible. Cecilia Beaux (1855-1942) was a renowned portrait painter who had a summer home in Gloucester, where she often painted notable clients. Nell Blaine (1922-1996), who moved to the area to paint in 1943, was well known for her vivid landscapes. Even after being confined to a wheelchair after contracting polio, she continued working from her cottage in East Gloucester, which was her summer home from 1974 until her death 22 years later.

Today, the Cape Ann tradition of painting, as well as sculpting and other forms of art, is alive and well. Hundreds of artists make their homes in — or make their way to — this area. Although it is best known for representational art, many different styles have and continue to flourish here, almost like a microcosm of the greater art world. 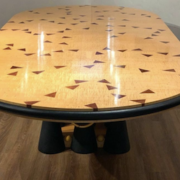 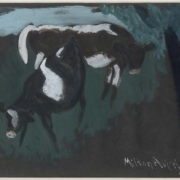