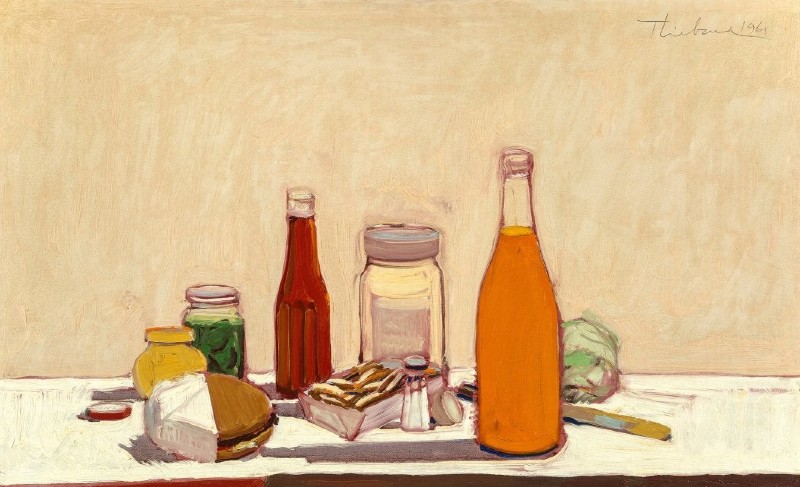 NEW YORK – While many have pigeonholed painter Wayne Thiebaud, lumping him in with Pop Art, which started to take hold just as Thiebaud’s own art career blossomed, this tendency to oversimplify his work belies his far-ranging style and risk-taking as an artist.

“He is probably the most underrated blue-chip American artist and people think that they know what he is about and he is much more than that,” said art writer/curator Julia Friedman, who has long studied his work. She contributed an essay to the exhibition catalog for the Crocker Art Musem’s fall 2020 exhibition, “Wayne Thiebaud 100: Paintings, Prints, and Drawings” in Sacramento, Calif., and spoke to Auction Central News about the artist.

The exhibition honors Thiebaud, who will celebrate his 100th birthday in 2020 on Nov. 15, surveying his oeuvre and examining his visual journey and artistic influences. From Ab-Ex-type works and representational works to his current passion for figures, the artist has evolved throughout his career. 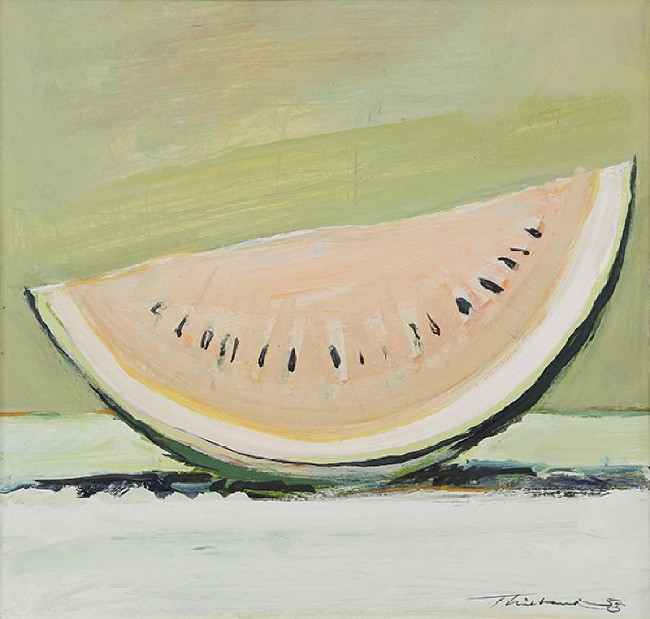 In a press release for the exhibition, the museum’s associate director and chief curator Scott A. Shields noted that much of the artist’s work is reflective and informed by memory and tradition. From his recent series of works on clowns, which hearken back to his childhood when circuses were a key part of Americana, to his iconic and beloved works on sugary confections, Thiebaud often paints from memory. The feelings these artworks elicit from audiences—whether yearning or nostalgia—are powerful and lie at the essence of his appeal.

“His canvases are some of the most important paintings ever made in California, and they possess an enduring interest, combining nostalgia and optimism, loneliness and isolation,” Shields said, noting that Thiebaud was raised in California and spent much time in Sacramento so having the exhibition here was a natural fit. 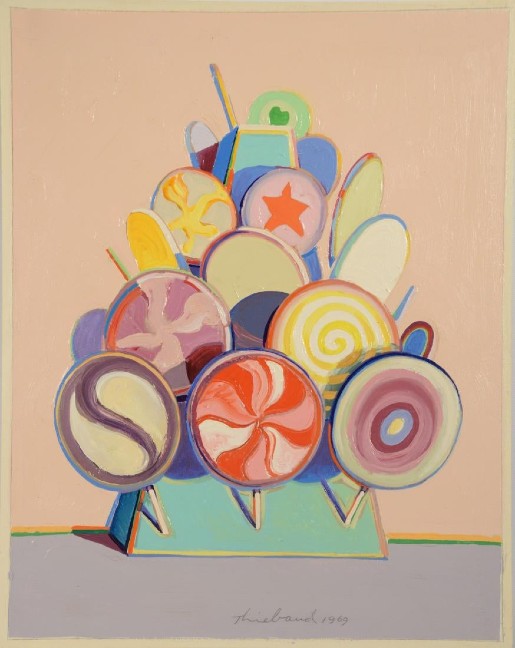 People often focus more on the what of Thiebaud’s paintings (subject matter) and oversimplify the artist, instead of focusing on the how of his painting, Friedman said. Focusing the conversation only on his subject matter is problematic “because he is actually a really serious painter.”

“He is profoundly humanistic, rooted in the history of art, and completely disinterested in any of the art market fame aspects of it. He is hugely significant and because of the broad appeal of his subject matter, he has been simplified but I think in the end the record will be straightened out.” she said, summing up his artistic legacy. “The validation he seeks … he wants to bring smiles to people’s faces.”

Wayne Thiebaud’s 1957 watercolor, ‘Island Borough,’ sold for $30,000 + the buyer’s premium in April 2019 at Wright. Photo courtesy of Wright and LiveAuctioneers

While Pop artists seek to neutralize any personal touches in their works, thus giving them a commercial feel, Thiebaud has always consciously painted. He has had far more in common with Edgar Degas than Andy Warhol. “His genius is that he could create the world in painting and not replicate the real world in the medium of painting as the pop artists were doing.”

Richard Wright, founder of Wright and CEO of Rago’s in Lambertville, N.J., said Thiebaud always sells well on both the primary market and auction market with an auction record of around $8 million. “The market is excellent for his works,” he said. “As a painter, I would say he is prolific but he is also incredibly well-managed.” His paintings are expensive so new collectors can find a good entry point into the market with his prints that are also highly desirable.

Wright noted that unlike some artists where the date or period matter, for Thiebaud, collectors are primarily drawn to subject matter. “With Thiebaud, it’s about the seduction of the imagery … and he revisits that imagery throughout his career.” 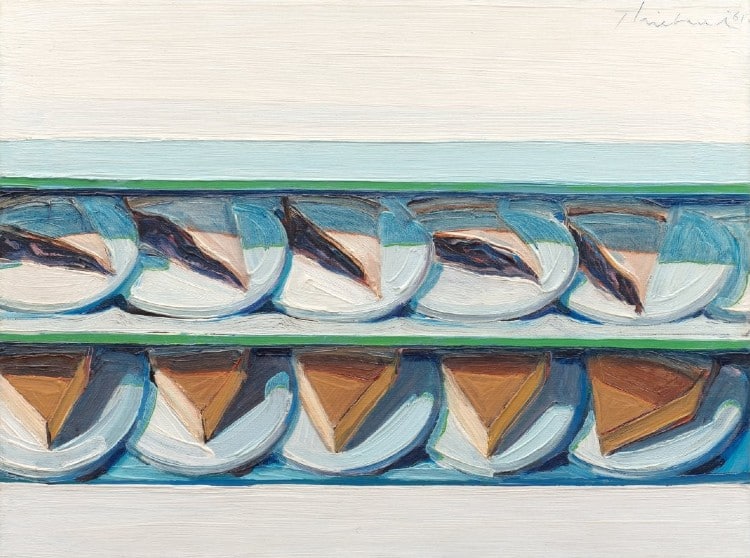 Thiebaud got his start as a graphic designer and cartoonist before taking up painting in the mid-1950s. “He combined a number of interests then current in American art: thick, gestural brushwork, everyday subject matter, and commercial imagery,” according to the San Francisco Museum of Modern Art. While his landscapes and cityscapes are highly sought after as is virtually anything he sets out on canvas, the artist’s most iconic subject matter remains his depictions of cakes and pies and other sugary desserts. Creating a new take on the traditional still life and redefining the ordinary through scale, space, color and light, Thiebaud creates luscious desserts that he paints in an almost-sculptural manner with thick impasto, adding to the appearance of the subject.

“Thiebaud is a beloved artist. He really just paints beautiful luscious paintings and the paintings just have an enduring appeal,” Wright said. “He paints in a delicious manner, thickly painted but with a real lightness of color … There is just something incredibly appealing about the visual style of his paint strokes.” 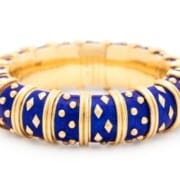 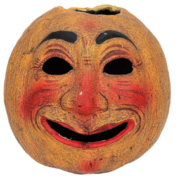 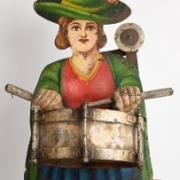 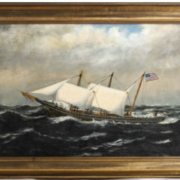 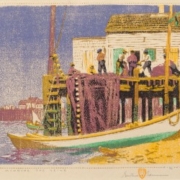 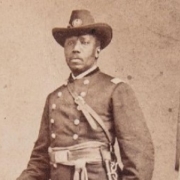 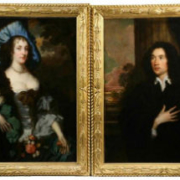 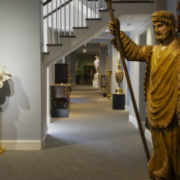