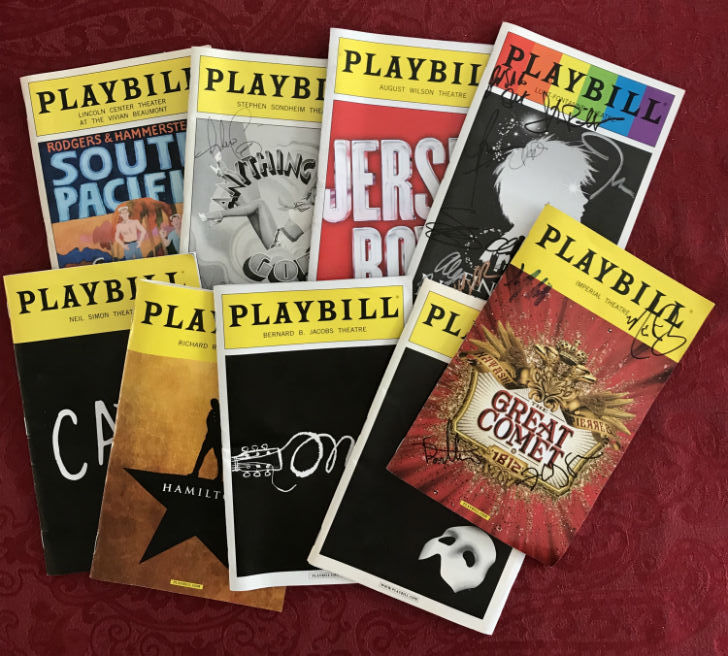 A small sampling of the author’s personal collection of ‘Playbills’ over the last 20 years shows a definite preference for musicals.

NEW YORK – From Playbills and window cards to scripts, photographs and even artifacts from theaters themselves, theater memorabilia is highly collectible. The joy of the shared experience of seeing a live performance, be it a drama at a local theater or an extravagant musical on the Great White Way, lives on long after the curtain closes when we can bring home a tangible memory of the show.

Certain shows and actors/actresses are highly popular with collectors but as with most antiques, collecting is highly personal. Broadway fans have their favorites across the decades from Carol Channing, Ethel Merman, Patti Lupone and Joel Grey to Aaron Tveit, Idina Menzel and Sutton Foster. Popularity also plays a role in how collectable a show is, including the long-running Phantom of the Opera and beloved shows like Cats, A Chorus Line, Rent and Hello Dolly. Shows that one has seen or have a connection to drive demand and interest.

“Seeing a show, learning the music or making memories in a theater can all lead to the unscratchable ‘itch’ many collectors know all too well,” said Gabe Fajuri, co-founder of Potter & Potter Auctions in Chicago. “Personal memorabilia and stage-used props with solid provenance are always sought after, as are costumes.” 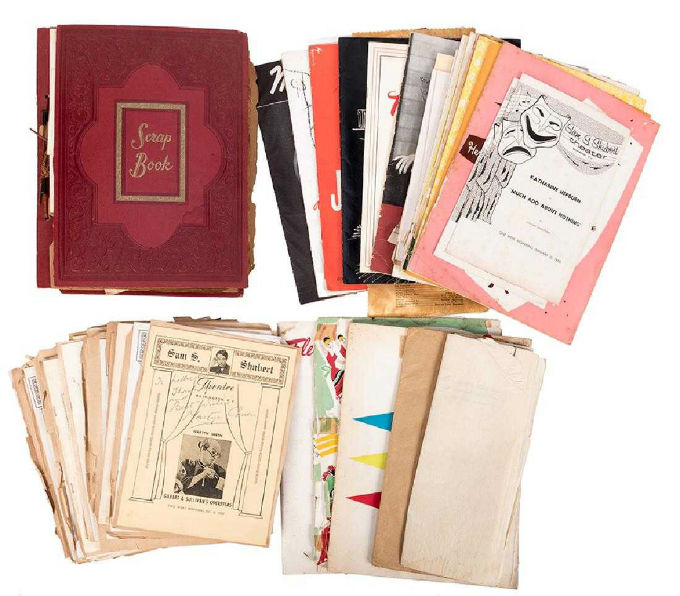 It’s not just collectors who appreciate theater memorabilia; museums are also actively preserving the legacy of the performing arts. Fittingly given the significance of New York City’s theater district, The Museum of the City of New York has a theater collection composed of over 200,000 objects telling the history of theater in New York City from 1785 to contemporary Broadway productions. Highlighting theater as well as burlesque and vaudeville, the collection ranges from scripts to design drawings and architectural effects to window cards, props, costumes and posters.

Playbills, the souvenir programs handed out to theatergoers and immediately recognizable by its iconic yellow and black cover, are printed specifically for each production. Fans often line up at stage doors following a performance to have their Playbills autographed by the show’s stars. Once back home, they often frame them or store them in binders.

“I will say that people love collecting Playbills because it’s tangible proof and a reminder that they experienced one of the most ephemeral of the arts – live theater,” said Editor-in-Chief Mark Peikert of Playbill magazine.

A few Playbill magazines have fetched over $1,000 each, including one for A Streetcar Named Desire for the original 1947 Broadway production at the Barrymore Theatre in New York, signed by Tennessee Williams and the show’s stars, which sold at Bloomsbury Auctions in June 2010. Several Playbills have  sold on eBay such as a Ziegfeld Theater Playbill from 1951 featuring the signatures of stars Vivien Leigh and Laurence Olivier cast as Cleopatra and Caesar.

“As an actor who has twice co-starred in Broadway productions, the memories of seeing the Playbill to those plays are forever etched in my memory,” said actor and author David Orange. “Truly a great keepsake, as it is for theatergoers. They are great looking, colorful, and a great conversation piece.” He noted people have sent him photographs of how they have decorated a room in their home or the wall going up a flight of steps with framed Playbill magazines.
Among the most desirable in his collection of 150 old Playbills are the great plays of the Broadway stage with the original cast. 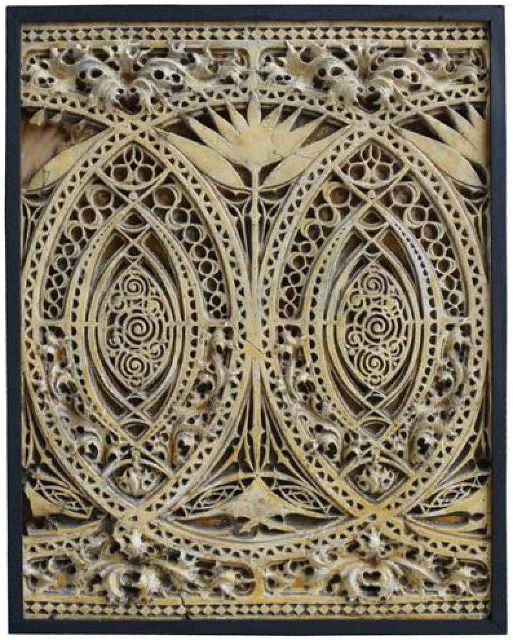 “The immortally classic Broadway Playbills that I have such as Funny Girl, Barefoot in the Park, Man of LaMancha, The King and I, Zorba, Three Penny Opera, Bus Stop, Hamilton, etc. are highly sought after by theater aficionados,” he said.

Asked which theater collectibles are more valuable, Fajuri said, “It’s a tricky combination of elements: history, aesthetics, rarity and subject matter – there’s no one right answer to this question. Obviously, the more popular the production, the more potential there is for its memorabilia to be collectible, and the same goes for the actors and actresses who performed in those shows.”

Architectural elements from theaters are highly collectible such as this custom bench for the Marina City Theater lobby that made $6,250 in February 2018 at Wright. Photo courtesy of Wright and LiveAuctioneers

The market for window cards and posters is not what it should be though there are avid collectors in the marketplace, he added. “Early theatrical posters and memorabilia (pre-1900) can do well, depending on the performers advertised, but sadly, objects related to the careers of some of the great thespians of yesteryear do not command the prices many feel they should. Names like Fanny Brice, Joseph Jefferson, and even Edwin Booth have lost their luster.”

No matter what theater memorabilia you collect, the object’s purpose is achieved if it brings back memories or elicits a spark of joy. “Live Broadway theater is not something you can see repeatedly like a movie,” Orange said. “When a theatergoer is there to see an original play, the memories of that evening are priceless.”