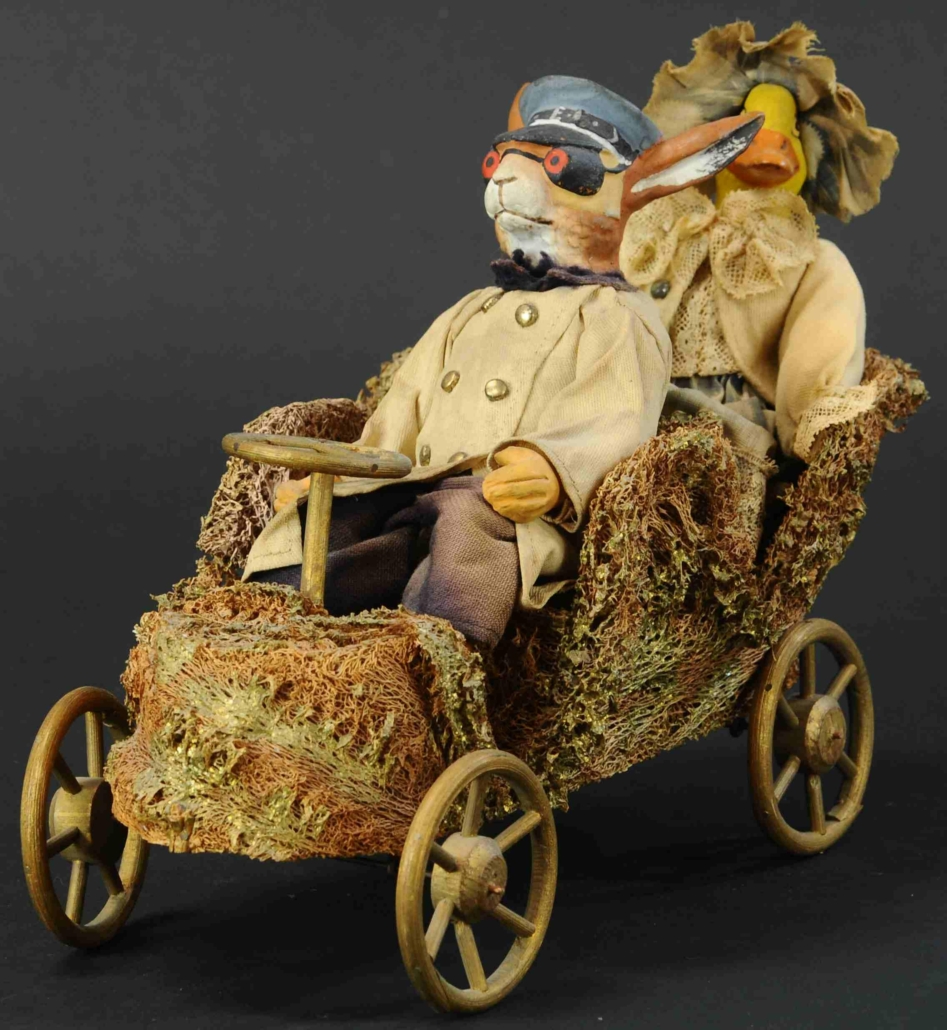 This moss automotive candy container driven by a rabbit chauffeur and a duck passenger, both composition figures, is the kind of unusual example that serious collectors look for. Bertoia Auctions image

NEW YORK — When it comes to Easter candy containers, the more unusual and unique, the better. Rabbits are, of course, closely associated with the holiday so it’s no surprise that rabbit candy containers are as copious as real-life rabbits. Holiday collectors seek unusual examples such as figures driving cars or being ridden by another figure.

In the late 1940s, Germany saw a proliferation of cottage industries and artisans making holiday items, particularly for the American market, from hand-blown glass ornaments to candy containers and more for Halloween, Christmas and of course, Easter.

“Rabbit candy containers are pretty common,” Bertoia said. “I think collectors prefer the more unique styles … the ones that have characters sitting on them tend to make them a little bit more unusual.” Most figural candy containers have painted eyes or glass eyes, and having glass eyes can make one container more desirable than another. These objects are typically made of papier-mache, or composition, and the best examples will be dressed in clothing made from cloth. Most are flocked to create the appearance of fur. Flocking is the process of adding numerous small fiber particles, called flock, onto the figure’s surface to add texture. 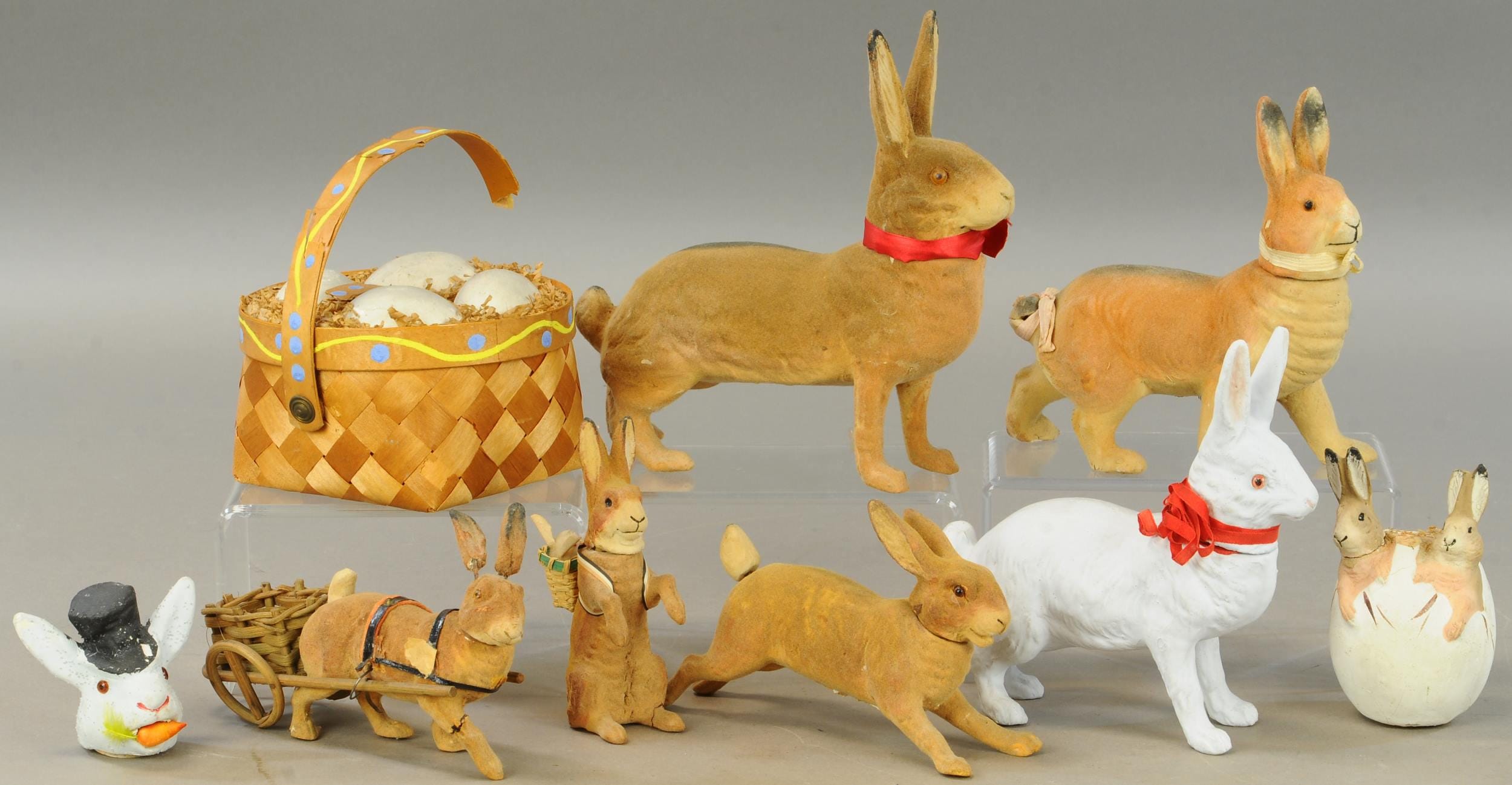 Antique rabbit candy containers are delicate, especially their ears. This warren of nine bunny candy containers plus an Easter basket with eggs all had some condition issues, except the all-white rabbit. The group lot still fetched $1,800 plus the buyer’s premium in December 2020 at Bertoia Auctions.

Figures riding rabbits are among the most highly sought after containers. They typically bring several thousand dollars apiece when they come up for auction, which is not often. One depicting Teddy Roosevelt riding a rabbit made of papier-mache and plaster, standing 10½in tall, brought $4,500 plus the buyer’s premium in May 2015 at Fontaine’s Auction Gallery. Bertoia Auctions has one in its April 2021 auction. 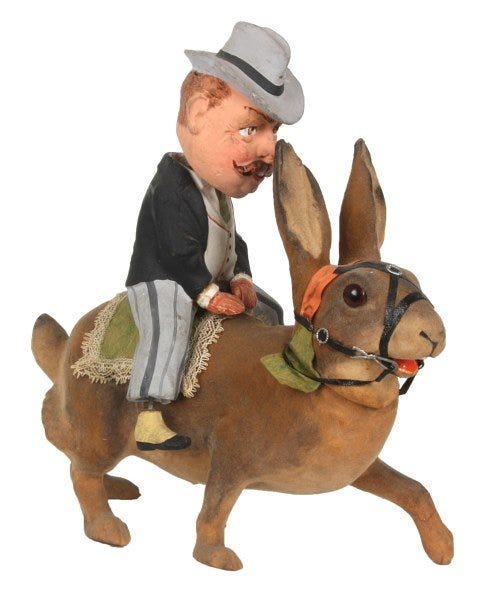 A rare Teddy Roosevelt nodder candy container earned $4,500 plus the buyer’s premium in May 2015 at Fontaine’s Auction Gallery.

Adding a vehicle into the mix increases a container’s value. Bertoia has an elaborate piece in its April auction that takes the form of a moss car chauffeured by a well-dressed rabbit carrying a duck passenger. “There is a cross-collectability with that as well, so it’s not just Easter collectors or rabbit collectors. You could also even entice an automotive toy collector to possibly go after it,” she said. While not a candy container, an Easter bunny dressed in fine clothes riding a tricycle and carrying a basket of flowers on its back sold for $3,750 at Bertoia Auctions in October 2019.

One thing collectors need to watch out for with bunnies are their ears, which, understandably, are quite fragile. “The most important thing with the rabbits are the ears,” Bertoia said. “Most of the time the ears are broken off, so to find one in really great condition where the legs have not been broken and repaired and the ears have not been broken and repaired … to find original ones are what most collectors obviously would be looking for.”

This rare German rabbit candy container with glass eyes over a crepe paper bag, 4½in tall, made $7,500 plus the buyer’s premium in November 2020 at Bertoia Auctions.

With these items, size also matters. “I think the larger ones are more desirable,” she said. “They have more presence and tend to be rarer. The smaller ones are more common and are pretty easy to find.” Proof of this can be seen in a patriotic standing rabbit candy container that fetched $4,750 in December 2014 at Pook & Pook, Inc. with Noel Barrett. The 24in figure is scarce in its size and dressed in cloth, wearing red and white striped pants, a shirt and a fancy hat. It has cross-collecting appeal and would be well suited for both Easter and Fourth of July.

While rabbits are indeed common, some Easter-themed candy containers don’t even include figures. An Easter Greeting church candy container made of tin and glass, 4⅞in with its steeple, sold for $2,200 plus the buyer’s premium in June 2019 at The RSL Auction Co. The auction house noted at the time that this tin and glass example is pretty scarce and they had only seen one other, which was lacking its steeple. 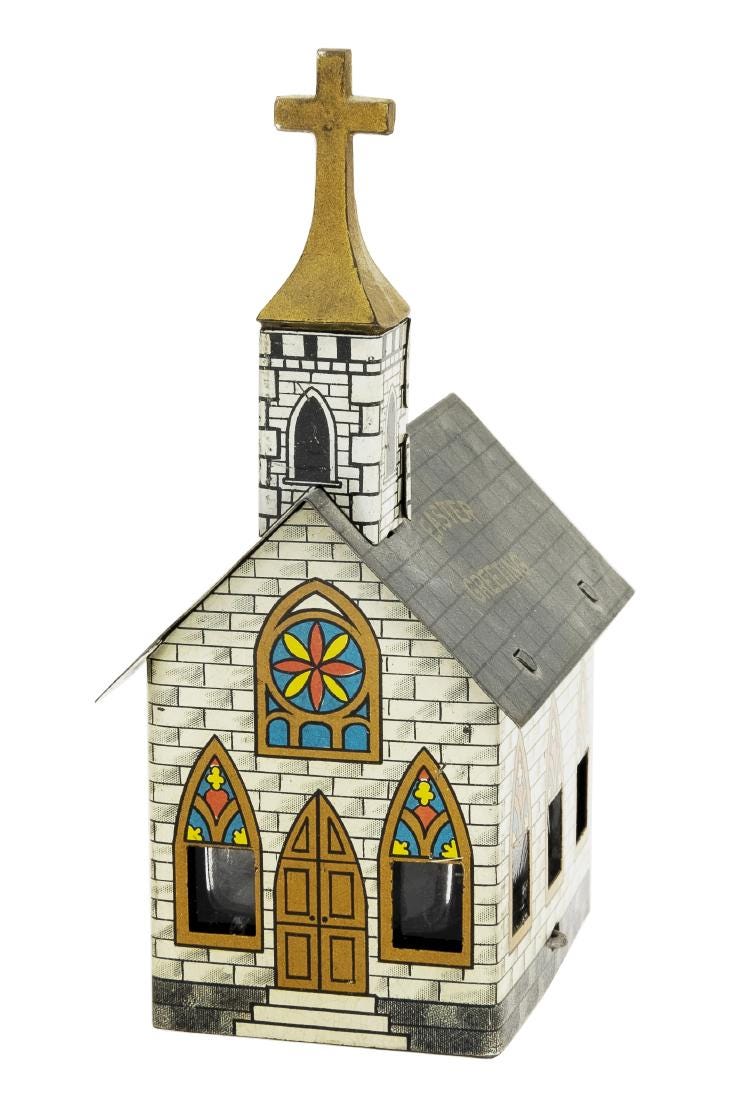 This ‘Easter Greeting’ church candy container made of tin and glass, standing 4⅞in tall, sold for $2,200 plus the buyer’s premium in June 2019 at RSL Auction Co.

Candy containers that come in small sizes can be quite popular also, and in Germany, giving candy-laden papier-mache Easter eggs has been a tradition since the 19th century. They are believed to have originated in Erzgebirge, and some even had lace around the sides. Whimsically and beautifully decorated examples appear every so often on the market, and one can usually get a dozen or so of them for a few hundred dollars. Larger ones, measuring about 9in long, contained a Just Me bisque doll and were made by Armand Marseille in Germany. They sell now for about $1,000 each.

The German Girl in America website offers tips for dating German papier-mache eggs, noting that eggs stamped German were made prior to 1918, while those marked German Republic would date to 1918-1933. Easter eggs made after World War II are likely marked with one of the following:  East Germany, German Democratic Republic, West Germany or Federal Republic of Germany. 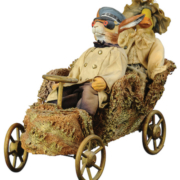