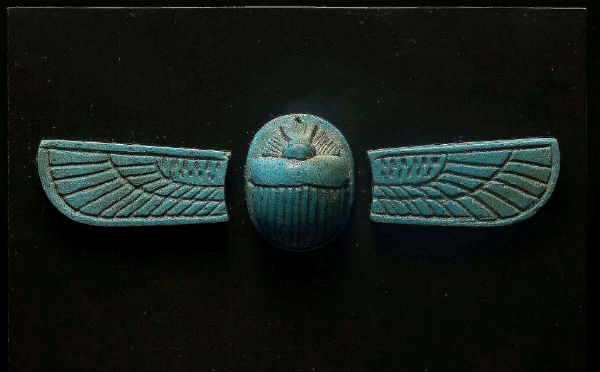 NEW YORK – Ancient Egyptians associated the humble beetle, who rolled oversized spheres of dung across the earth, with Khepri, the deity believed to roll the sun above the horizon. In fact, they depicted this sun-god as a sacred beetle, complete with naturalistic head, wing case and legs. Through Roman rule (30 B.C.–A.D. 354), Egyptians, rich and poor, commonly wore or carried small, sacred-beetle amulets to protect body and soul. Based on Greek and Latin nomenclature, these are now known as scarabs.

During the Middle Kingdom (2030-1640 B.C.), scarabs, strung on linen cords or mounted on gold, silver or bronze bezeled rings, also served as personal or administrative seals. Their tiny, flat undersides were often crowded with carvings of names and titles of officials or royalty (dead, alive or imaginary), sometimes enclosed in elliptical cartouches. Scores depicted decorative motifs like sun-disks, eyes of Horus, naturalistic falcons, crocodile-headed figures, serpents, lions, lotus blossoms or palmettos. Others, by combining images with hieroglyphics, held multiple meanings, including religious or political affinities. Since styles also varied, each scarab was unique. 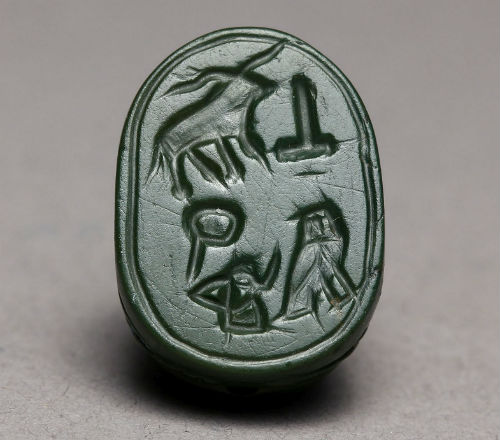 During the New Kingdom (1550-1070 B.C.), scarabs often featured inspiring inscriptions like “firm of heart,” “beloved of Isis,” “there is no need for fear” or “goodness, life and protection forever.” Commemorative scarabs, notably those produced under Amenhotep III (c. 1386–1353 B.C.), marking notable marriages, lion-hunts or featuring extensive historical inscriptions, were massive.

Other New Kingdom scarabs symbolized resurrection, the progression of the dead through the underworld to the afterlife. Though embalmers removed most internal organs of the deceased during mummification, they left their hearts, seats of emotions and memory, intact for use through the next life. To ensure that these organs would not testify against their bodies during Weighing of the Heart rituals, green, heart-shaped gemstone scarabs were tucked within mummy-bandages. In addition, blue faience, winged scarabs, inscribed with protective spells from the funerary text, the Book of the Dead, were customarily placed above the hearts of the deceased. Some also feature hieroglyphics imploring their hearts not to abandon their bodies. 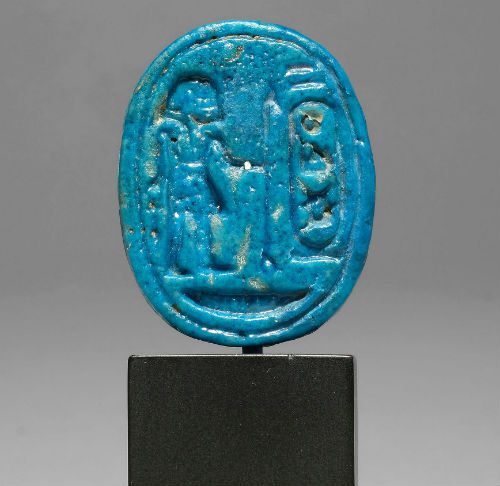 Naturalistic scarab for Thutmose III, New Kingdom, 18th Dynasty, 1550-1295 B.C., turquoise, glazed, finely carved, underside depicting King holding an ankh in one hand and a scepter in the other, to the right, the hieroglyphic prenomen of Thutmosis III within a cartouche, reading ‘[Lord] of the two lands, Menkheperre.’ Length: 1 3/5in (4cm). Provenance: formerly in the Haddad collection, London, 1980s. Realized $3,200 in 2019. Image courtesy of Medusa Ancient Art, www.medusa-art.com

A scarab’s quality, style, condition and eye-appeal determine its worth. So does its historical significance. Those that validate royal existence or depict actual events, for example, enrich our knowledge of ancient Egyptian life.

Due to recent regulations, scarab provenance is also highly important. “For instance, an amethyst, jasper or hardstone one, featuring an exquisite cartouche of King Tut would be highly desired by collectors and institutions alike – especially if it was cited in a Parisian or English auction house catalog of the 1950s,” explains Anawati.

Due to recent regulations, their provenance is also highly important. An amethyst, jasper or hardstone scarab, featuring an exquisite cartouche of King Tut, would be highly desired by collectors and institutions alike – especially if it is documented prior to 1983. 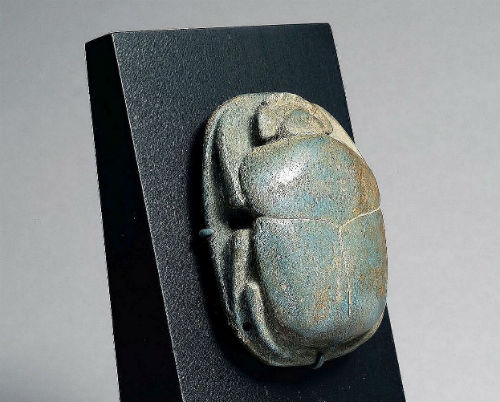 Since scarabs were produced in vast numbers through millenniums, scores have survived. Most are made of steatite (sandstone), faience (moldable man-made, ceramic) or hard stone. Yet gemstone ones, carved in turquoise, lapis lazuli or black obsidian, remain as desirable as the day they were carved.

Serious collectors, however, may find rare ones most appealing. “If you have a scarab for Thutmosis (1479–1425 B.C.) and a similar one for the female pharaoh Hatshepsut, (1507–1458 B.C.), explains Anawati, “I would be very keen to buy the Hatshepsut scarab. There may be hundreds of scarabs for Thutmosis, but few for Hatshepsut.”

Bidding for lapis lazuli mountain climbs to $72,500 at Kaminski