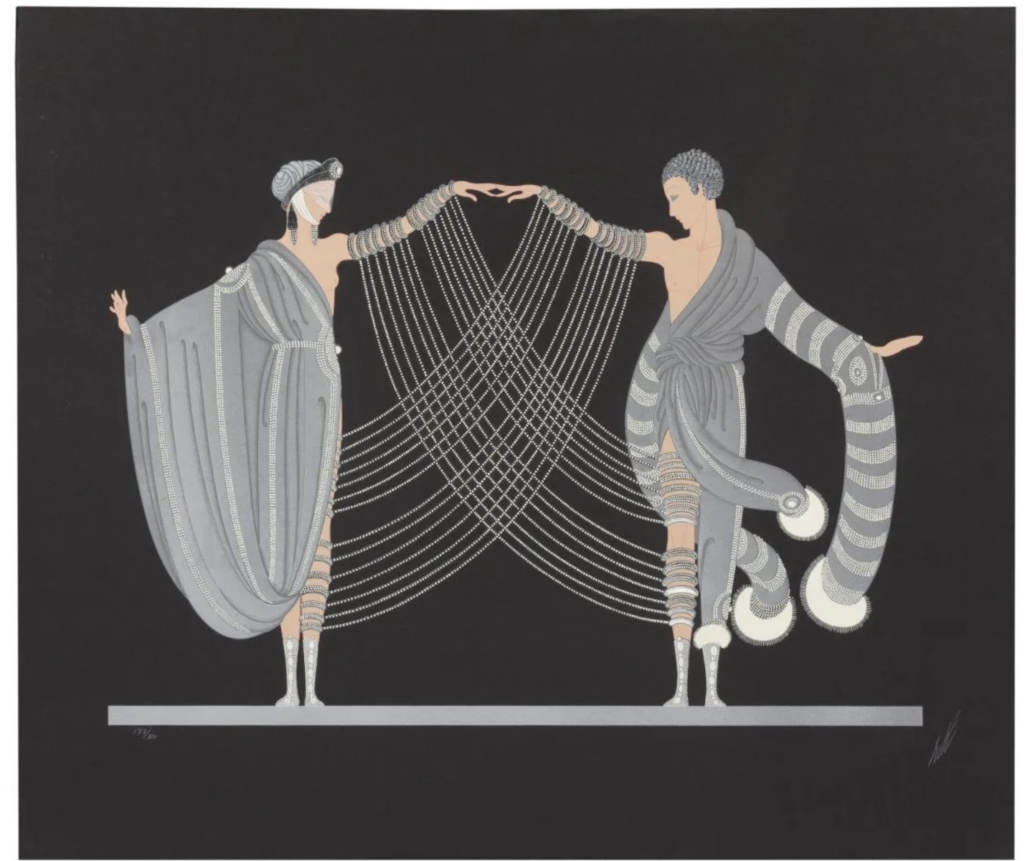 Two Erte screenprints from the 1983 Love and Passion suite, ‘The Marriage Dance’ (pictured) and ‘Kiss of Fire,’ sold together for $9,000 plus the buyer’s premium in June 2017 at Heritage Auctions. Image courtesy of Heritage Auctions and LiveAuctioneers.

NEW YORK — The Russian-born French artist and designer Romain de Tirtoff (1892-1990) could have followed tradition and entered the navy, as generations of men in his family had done. Instead, he was drawn to the creative arts. As a youngster, he began designing clothes for his mother, aided by her dressmaker. As an adult, he took on the moniker of Erte so he could pursue his dreams without sullying his surname. The pseudonym comprises his initials with a French pronunciation (Air-Tay).

Erte excelled in the arts in many venues, including designs for fashions, sets, costumes and jewelry. He is especially known for his serigraphs and lithographs as well as his late-in-life bronze sculptures. His work is represented in several major museums around the world and appealed to noted collectors such as the actress Elizabeth Taylor.

He left his homeland at the age of 19, settled in Paris, and launched durable careers as an artist and in the world of fashion. Within a few years, he was working with renowned fashion designer Paul Poiret on theatrical productions, and in 1915, he began producing hand-colored illustrations for Harper’s Bazaar, which he did monthly for the next two decades. The decadent details, bold color and geometric patterning that comprised his signature art style perfectly fit into the Art Deco aesthetic, which led to him earning the title of Father of Art Deco. 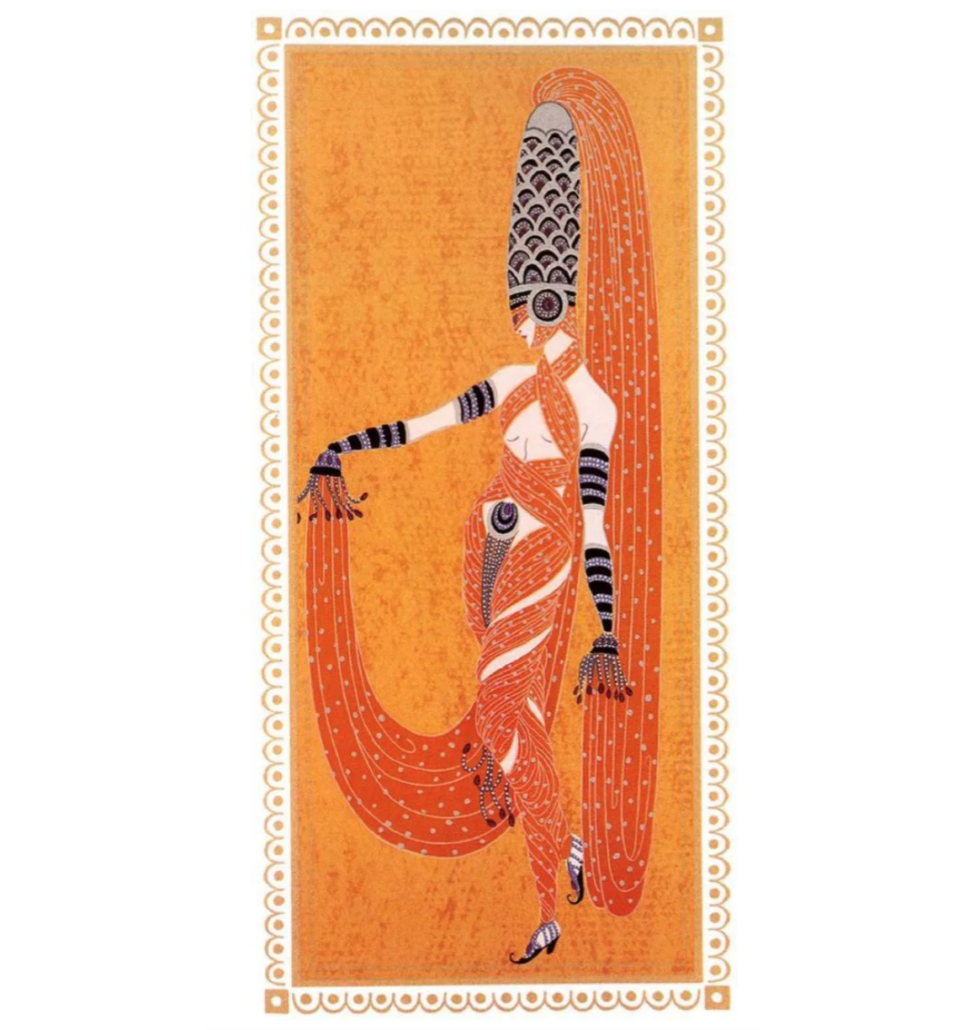 Even in his earliest works, he showed a preference for depicting glamorous women with a flair for theatricality; it radiates from a Erte gouache from 1924, Scheherazade – 8: La Nuit Winter Garden NY, which attained $21,500 plus the buyer’s premium in July 2019 at at White Knight Associates/White Knight Auctions. The repeating fan-like pattern in the subject’s headdress, the evocative outfit and the ribbon-like cascade emanating from her fingers and her headdress combine to captivate the viewer.

In 1927, Erte began work on an Alphabet series, creating lithographs that depicted nude women forming alphabet letters. Other legendary series by him include Sunlight / Moonlight and Love and Passion. Two 1983 color screenprints from the latter suite, The Marriage Dance and Kiss of Fire, sold together for $9,000 plus the buyer’s premium in June 2017 at Heritage Auctions.

He worked on the Alphabet series here and there, in between assignments, finally finishing it 40 years later. The most famous letter in the series, which he rushed to complete in 1967 in time for an exhibition in London, was the L, showing a woman with a tiger laying on her feet. 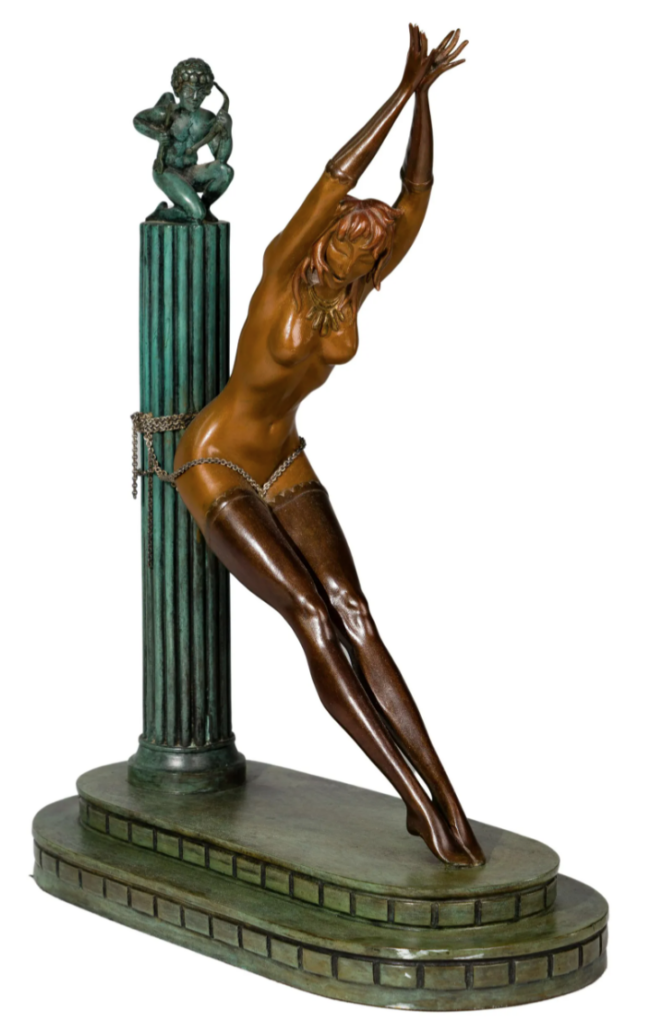 He continued the women-as-alphabet theme into his bronze sculptures. Erte’s 1960 bronze, Prisoner of Love, is nearly identical to his letter K lithograph, depicting a female nude chained to a column that is topped with a cupid. It made $7,500 plus the buyer’s premium in July 2021 at Leonard Auction, Inc.

Erte’s work was popular in his time, and he enjoyed a resurgence in interest in his work in the 1960s largely driven by London gallerist Eric Estorick. His original artworks were soon in such short supply that he issued limited edition prints, and, later, bronzes to appeal to new collectors. 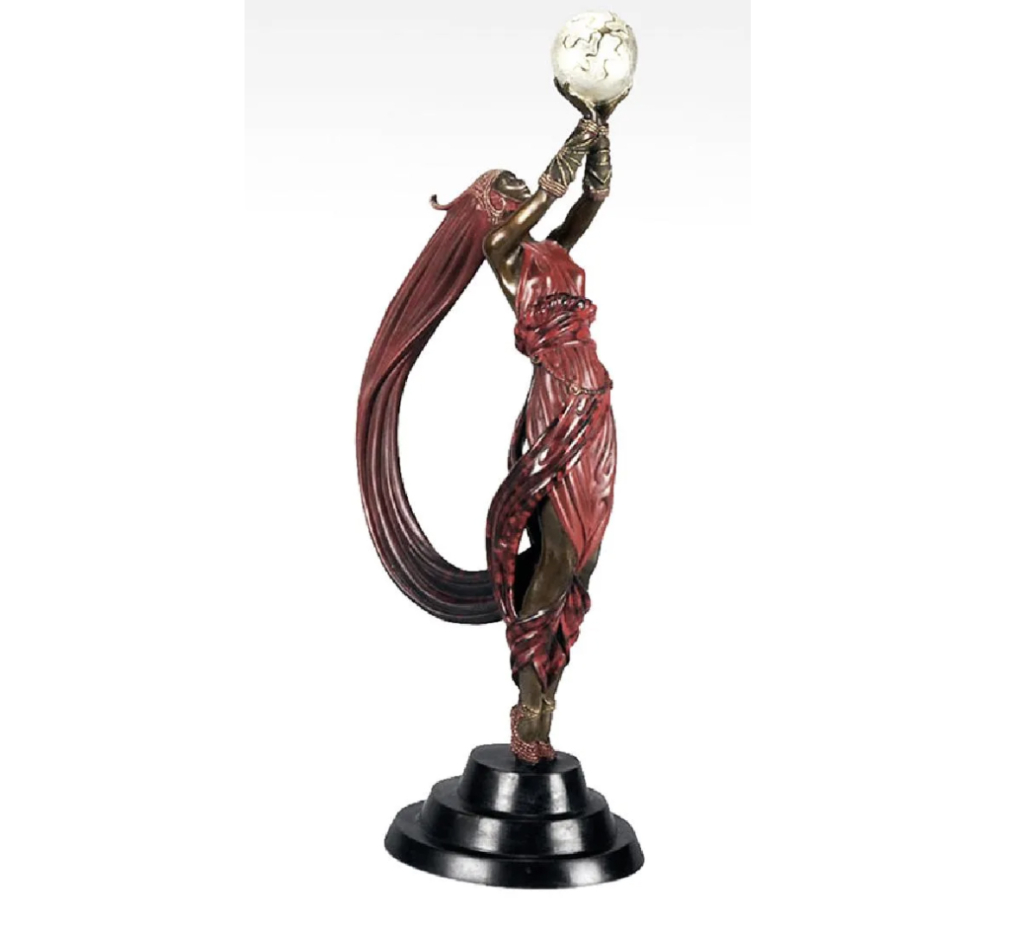 About 10 years before he died at age 97, Erte started sculpting bronze sculptures that revisited his earlier costume designs. He successfully expanded his worldwide audience by translating his chic visions into three-dimensional artworks. An example of his 1985 bronze The Globe realized $7,600 plus the buyer’s premium in June 2019 at Allure Antique Auction Company. Erte said he drew his inspiration for the sculpture from a swarm of fireflies that he saw on a May evening in Monte Carlo. 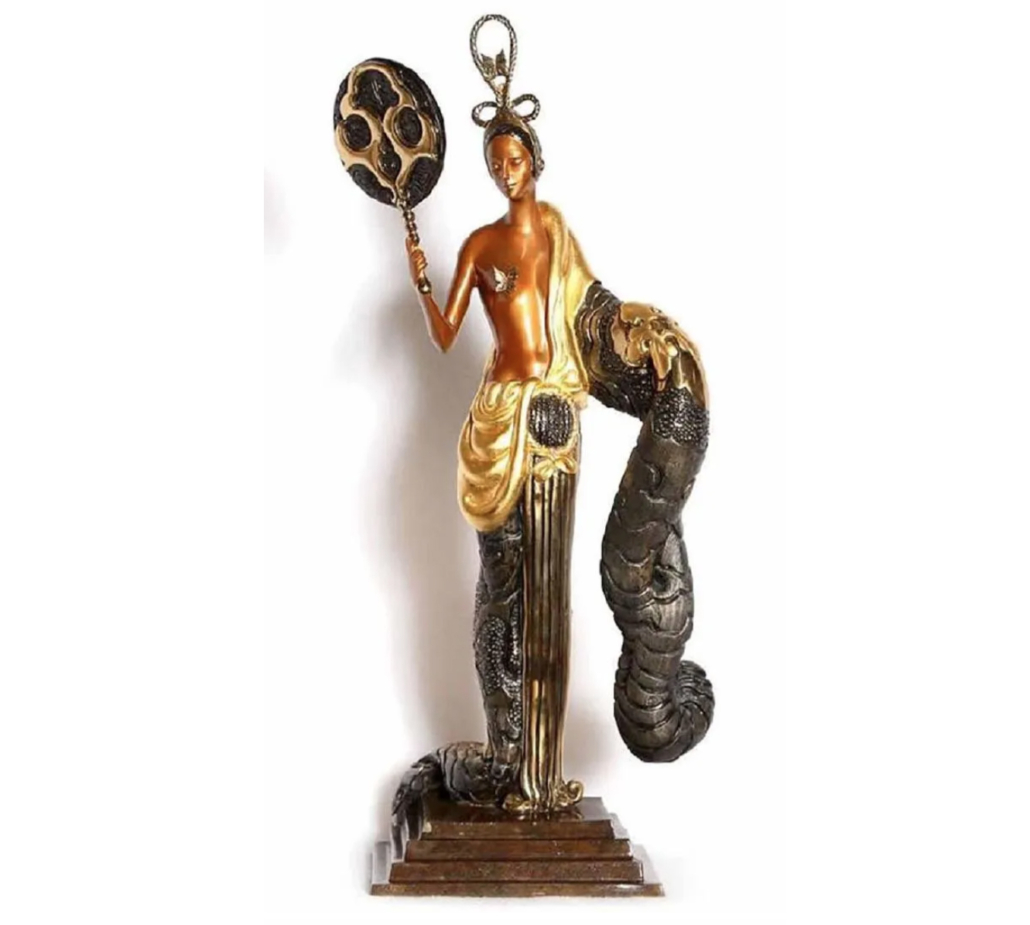 Another bronze based on an earlier Erte costume design, the 1989 sculpture Bamboo, brought $7,100 plus the buyer’s premium in February in 2019 at White Knight Associates/White Knight Auctions. It was originally one of the first prints in his Asian Princess suite and is a powerful example of how masterful Erte was in recreating his prints into sculptures. The gown covered in gold leaf and the way it drapes highlights the rich design and conveys movement. His clever use of braided hair to create a headpiece is fresh and inventive.

Erte’s work clearly and unapologetically embraces the sumptuousness of the Art Deco era but manages to remain timeless. The elegant, ethereal figures radiate glamour, indelibly marking the work as his. 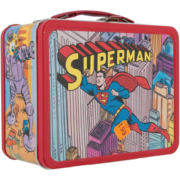 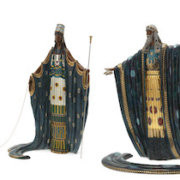