The Frank Lloyd Wright-designed Lowell Walter Residence, also known as Cedar Rock, is a Usonian Style house constructed along the banks of the Wapsipinicon River near Quasqueton, Iowa, in 1950. This work is licensed under the Creative Commons Attribution-ShareAlike 3.0 License.

When it comes to 20th-century American architecture, one name is mentioned more often than most, and usually with great reverence: Frank Lloyd Wright. This June 8 marks the 150th anniversary of Wright’s birth. He was born in Richland Center, Wisconsin. Legend speaks of Wright’s mother prophesying about her unborn child becoming someone that would create historic buildings.

Fallingwater — A private residence built Wright between 1936 and 1939. It was built for Pittsburgh’s noted Kaufmann family, owners of an elite department store. Edgar Sr. and Lilliane Kaufmann were familiar with Mr. Wright’s work, but it was the six months their only child, Edgar Jr. spent interning with the famed architect that lead to construction of the home. The house in southwestern Pennsylvania is not only near a waterfall, but the construction includes cantilevers, allowing the home to sit above the falls. It is open for tours: www.fallingwater.org. 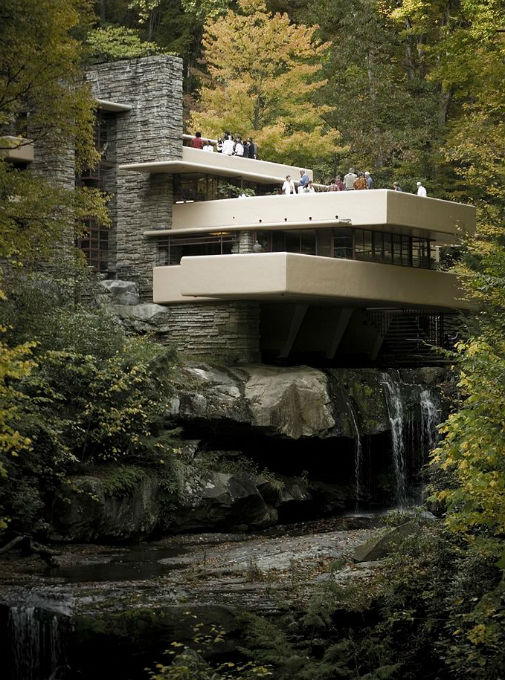 Taliesin — Served as the Wright’s primary residence between 1911 and 1959. Now the nonprofit Taliesin Preservation, it encompasses 800 acres of an architectural campus, complete with the original home and buildings. The property pays homage to various points in Wright’s career. The home, in Spring Green, Wisconsin, became a registered National Historic Landmark in 1976. It is one of 24 buildings by Wright to earn federal distinction. Tours are available: www.taliesin.com. 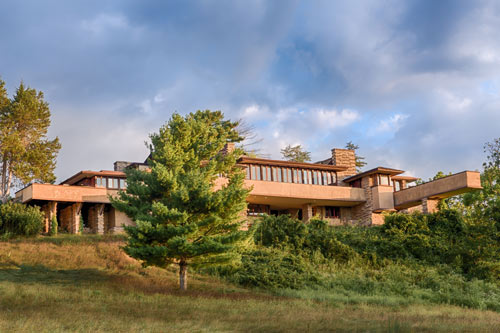 Frederick C. Robie House — Considered by many to be one of the last examples of Wright’s famous Prairie Style that he designed. Elements of Prairie Style homes include a sloping appearance, seemingly coming out from the ground, low-pitched roof and large windows that help create spaciousness within rooms. The Robie Home, located on South Woodlawn Avenue, in Chicago, was designed for Frederick C. Robie, and completed in 1910. Until 1926 it was a private residence, followed by seven decades of service as a classroom, dormitory, office space and a refectory. Twice during its existence the structure faced the prospect of demolition, but was saved, with Wright at the helm of the effort to save the building. Today the property is managed by the Frank Lloyd Wright Trust, and open to tours: www.flwright.org. 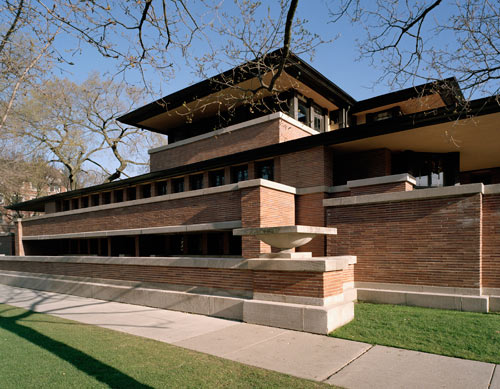 Commonly referred to as the Robie House, the Prairie Style structure was designed by Wright and built in 1910 in Chicago. Photo courtesy of Frank Lloyd Wright Trust

The Walter House at Cedar Rock — This Quasqueton, Iowa, estate is an example of Usonian architecture. It’s reported Wright’s cultivation of the Usonian approach came as a result of the Great Depression. Although the initial concept of the design was aimed at efficiency and affordability, many of the structures became custom-designed homes. However, sources reference Usonian influence in the evolution of the ranch style homes that became all the rage in the mid-20th century. The Walter House embodies the common themes of Wright’s Usonian approach, a one-story, horizontal structure, with an abundance of natural light throughout, set on a concrete base. Lowell and Agnes Walter contracted Wright to design the home, which was built between 1948 and 1950. The Walters lived in the home for more than three decades, before Mr. Walter died in 1981, and Mrs. Walter in 1986. Upon her death, it was donated to the Iowa Conservation Commission, as stipulated by the couple in their estate plans. Tours: Open May 24 through October, Wednesday through Sunday: www.friendsofcedarrock.org.

Taliesin West — This Western residence of Wright and his wife, Olgivanna, is described as a desert utopia on the Frank Lloyd Wright Foundation site. After purchasing more than 400 acres in Scottsdale, Arizona, Wright used local materials to incorporate the desert elements into constructing the primary structures in 1937. The property includes a drafting studio, the original residence, dining area, three theaters, a workshop, and residences for Taliesin Fellowship apprentices. The inclusion of natural walking paths, terraces, gardens and pools connect the buildings. In addition, Taliesin West provides residency to some Legacy Fellows who worked with Wright, and houses the Frank Lloyd Wright Foundation and the Frank Lloyd Wright School of Architecture. Taliesin West is open for tours year round: www.franklloydwright.org/taliesin-west. 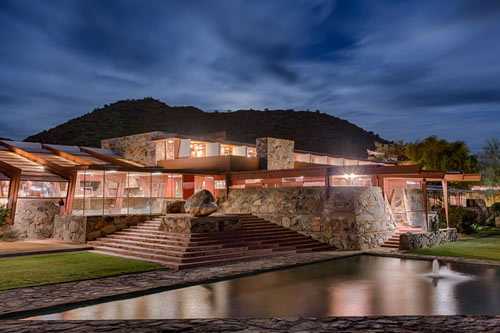 Taliesin West in Scottsdale, Arizona, is a Wright-designed, multi-structure campus constructed between 1937 and 1959. It served as the winter residence for Wright and his family. Photo courtesy of Frank Lloyd Wright Foundation

Unity Temple — In July 2017, the Oak Park, Illinois, structure will reopen to tours and events following a two-year, $23 million restoration project. Wright designed and oversaw initial construction of the Temple between 1905 and 1908. It was constructed completely of exposed concrete, and features 20 skylights. It was built to house the Unitarian Universalist Congregation, of which Wright was a member. The Temple still serves that purpose today, while also hosting performances, films and exhibitions of regional artists. Tours resume in July 2017: www.utrf.org.

Louis Penfield House — The Lake County, Ohio, residence came about in a unique manner. Louis and Pauline Penfield were visiting. Wright’s studio in Spring Green, Wisconsin in 1952, when the 6-foot-8 Penfield put forth a challenge asking Wright if he could build a home for someone of his stature, according to www.penfieldhouse.com. Six months later, the couple received Wright’s preliminary plans for a home with high ceilings, narrow stairs and slender windows. The home, which is located on a rise overlooking the Chagrin River, was built in 1955. It has served as a vacation rental since 2003. A smattering of rental dates is available for July, August and September this year. The Penfield property (house and three additional residences) located on 30 acres is listed for sale at a price of $1.7 million: www.penfieldhouse.com.

The back of the Louis Penfield House, Willoughby, Ohio (1955). Marykeiran image. This file is licensed under the Creative Commons Attribution-Share Alike 4.0 International license.

Solomon R. Guggenheim Museum — This decades-in-the-making structure is located in bustling New York City. It is a departure from the natural locales many of Wright’s architectural masterpieces occupy. All told, it took 16 years to complete, from commission to grand opening. Sadly, neither Guggenheim nor Wright was alive to witness the opening. The spiral design of the facility brought forth a unique approach to museum viewing. It is a diversion from the routine museum design of the period, which often brought visitors past the same artwork — going into and departing from a museum “Instead, Wright whisked people to the top of the building via elevator, and led them downward at a leisurely pace on the gentle slope of a continuous ramp,” stated at www.guggenheim.org.

Looted statues, pottery returned to Italy after probe in NYC
Scroll to top