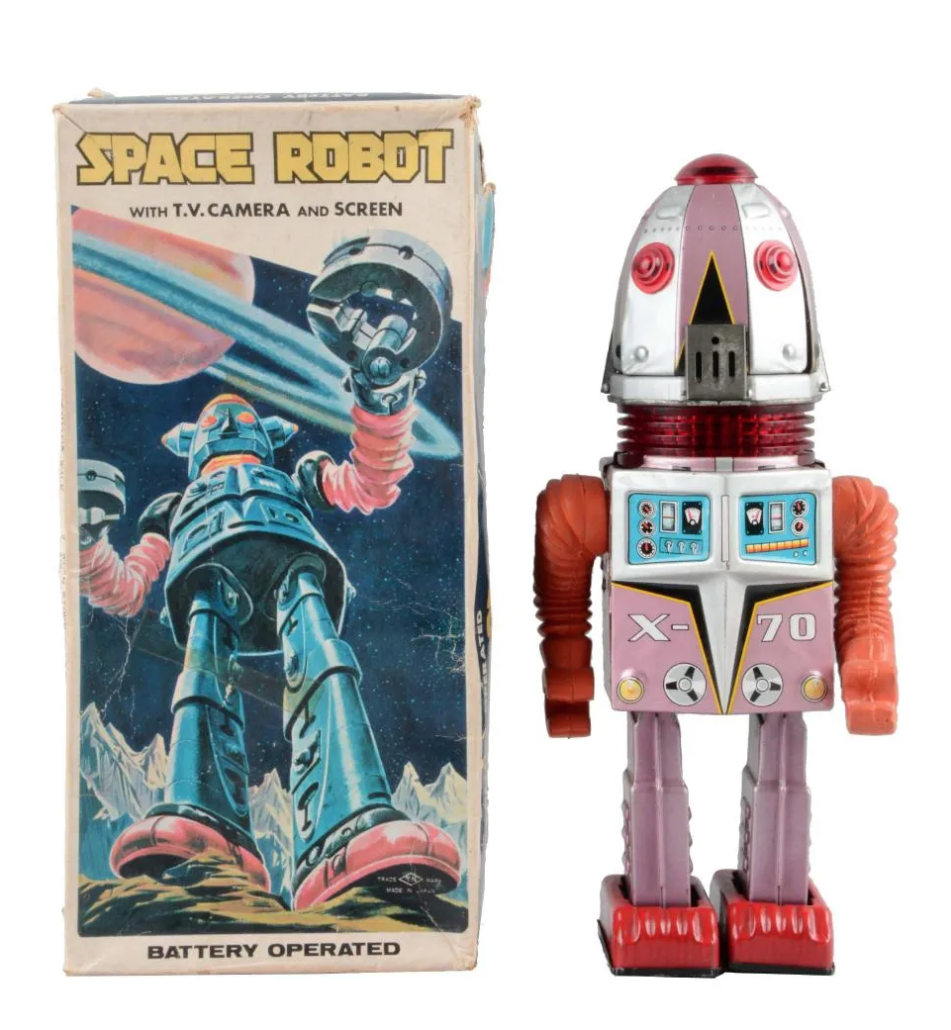 NEW YORK — Given the enduring fascination with science fiction and space travel, it’s no surprise that collectors ardently pursue space-themed toys. The trifecta of this category comprises toy ray guns, spaceships and robots with a common denominator being the action of these toys, many of them battery-operated. Glowing red or flashing “laser” lights along with popping, clicking or whirring sounds add to the fun.

“Robots, ships and guns are for sure the most sought after and collected,” said Alex Winter, president of Hake’s Auctions in York, Pennsylvania. “They simply encompass all that is sci-fi and futuristic and they are some of the most visually appealing and inventively designed toys.

Space toys encompass several major and minor toy franchises that were launched to capitalize on the popularity of movies, television shows, Japanese manga, comic book characters and the like. The first example that leaps to mind is the widely popular Star Wars toys franchise that was an instant hit in 1978, reportedly earning Kenner $100 million on its action figures alone in the first year of production. But there were many other series and independent space-themed toys before and after Star Wars, however. 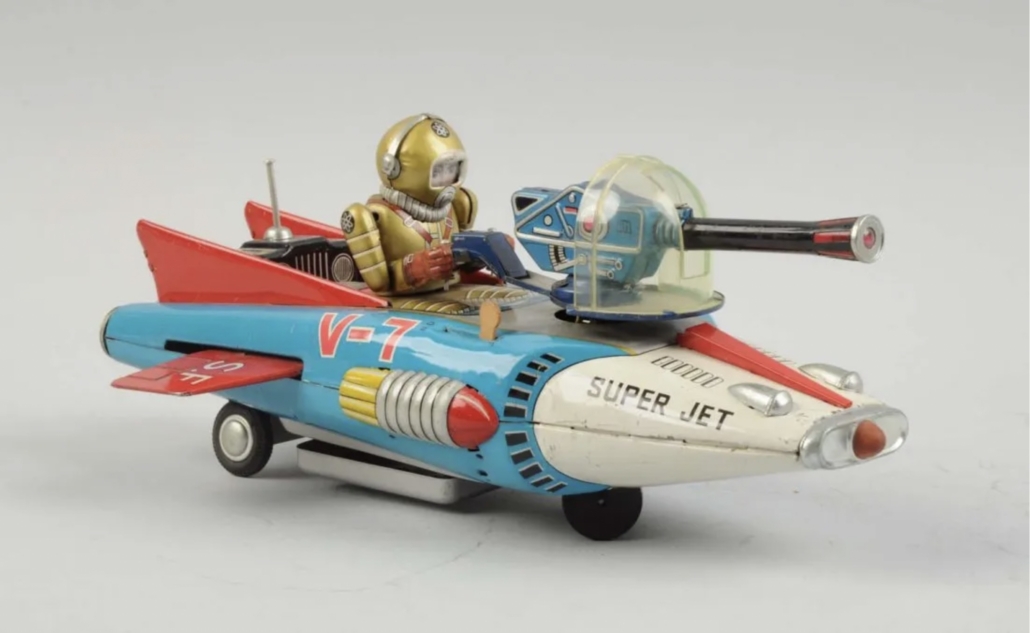 “Some of the earliest and best space toys come from Buck Rogers and Flash Gordon, dating back to the thirties. More great merchandise was made for these two early space heroes for decades after that, up to present day,” Winter said. From paper masks to cut-out books, Daisy guns and Marx rocket ships, toys from these franchises were some of the earliest known among space toys. Ray guns and toy pistols are highly sought after. A textbook example is a Buck Rogers Atomic Pistol Holster Set with its original box, which realized $3,700 plus the buyer’s premium in October 2018 at Milestone Auctions. 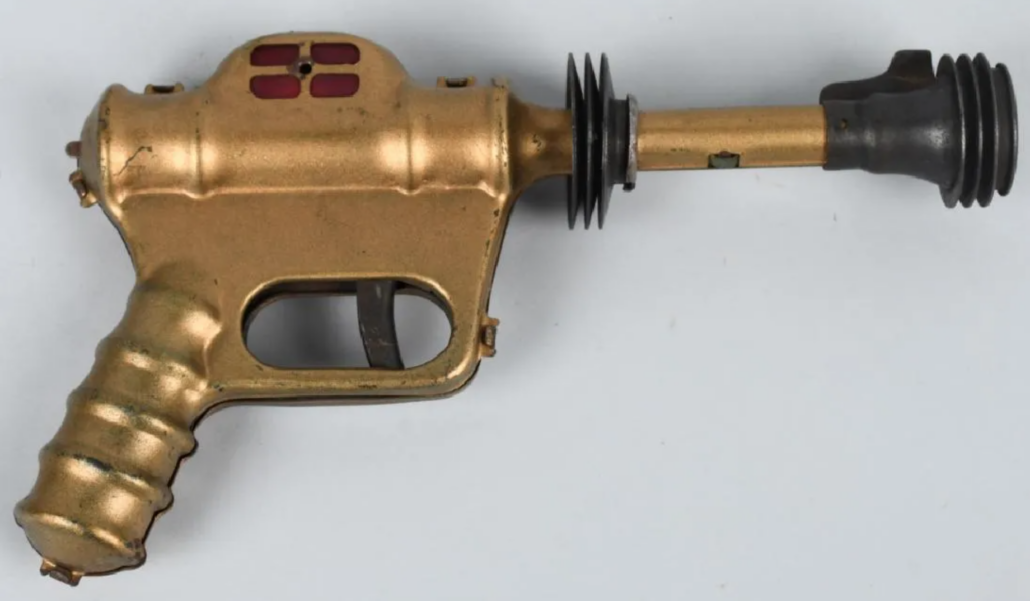 “The sixties saw shows like Star Trek and Lost In Space produce tons of toys. And then the seventies brought us Star Wars — the game changer for space merchandise. As for manufacturers, many different Japanese companies were behind the best robots while in the United States, Remco, Ideal and Marx made much of the TV items, followed by Kenner with Star Wars.”

Boasting what has been described as a “lighted engine with revolving engine sound,” the battery-op Space Patrol Car was one of many toys that used interactive features to enhance a toy’s realism. Clearly inspired by the classic silhouette of the Volkswagen Beetle, this 12 ½in long tin litho toy was made by Japanese toy maker Nomura in the 1960s. It features a tin litho spaceman driver, atom designs on the doors, a lightbulb that swings freely inside the toy vehicle and a lighted clear plastic jet exhaust. “This is just one of those classic space battery toys and with an attractive box, plus you have the VW car angle, so lots of cross interest,” Winter said. An example that retained its bright and glossy appearance sold for $9,487 in November 2013 at Hake’s Auctions.

Another producer of popular space toys was Bandai. One of its Flying Spaceman cycles that had retained its well-illustrated box sold for $19,000 in December 2021 at Milestone Auctions. Very similar to Superman’s design, right down to the “S” on the figure’s chest and a cape, the green rubber figure “rode” this tin friction cycle that is among the most desirable space toys. 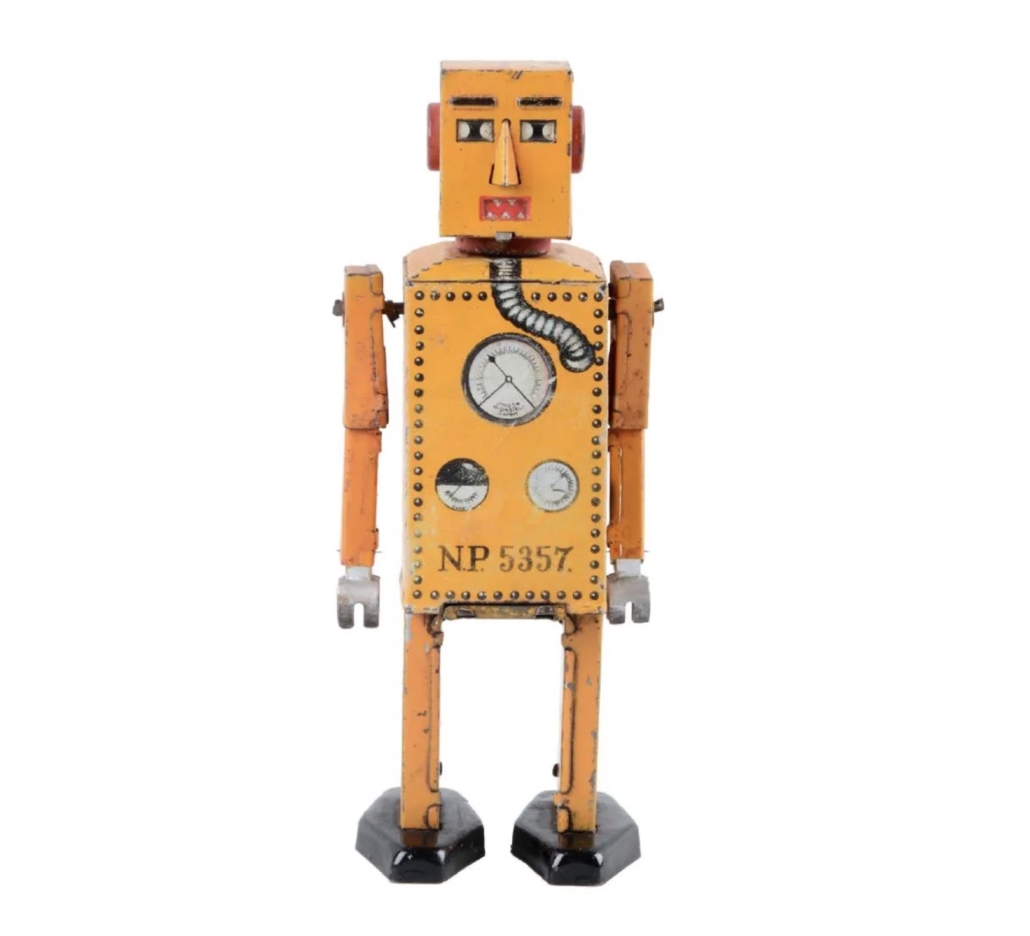 Robots have long been desirable. Robot Lilliput, which is widely credited as being the first toy robot, debuted in post-war Japan in the 1930s. A parade of other toy robots followed with names such as Atomic Robot Man, Television Robot and also a Japanese tin litho battery-op Space Robot X-70, one of which sold for $3,000 plus the buyer’s premium in April 2017 at Dan Morphy Auctions.

You can have the requisite action figures, alien monsters, and ray guns, but a vintage space toy collection isn’t worth the shelf space without at least one great toy spaceship – the rarer and more elaborately outfitted, the better. A 1978 “special offer” version of the Battlestar Galactica Colonial Viper ship from the popular toy line earned $2,420 plus the buyer’s premium in March 2018 at Hake’s Auctions. This item is generally considered among the scarcest of Battlestar Galactica toys as it featured a 3 ¾-in tall Lt. Starbuck figure. 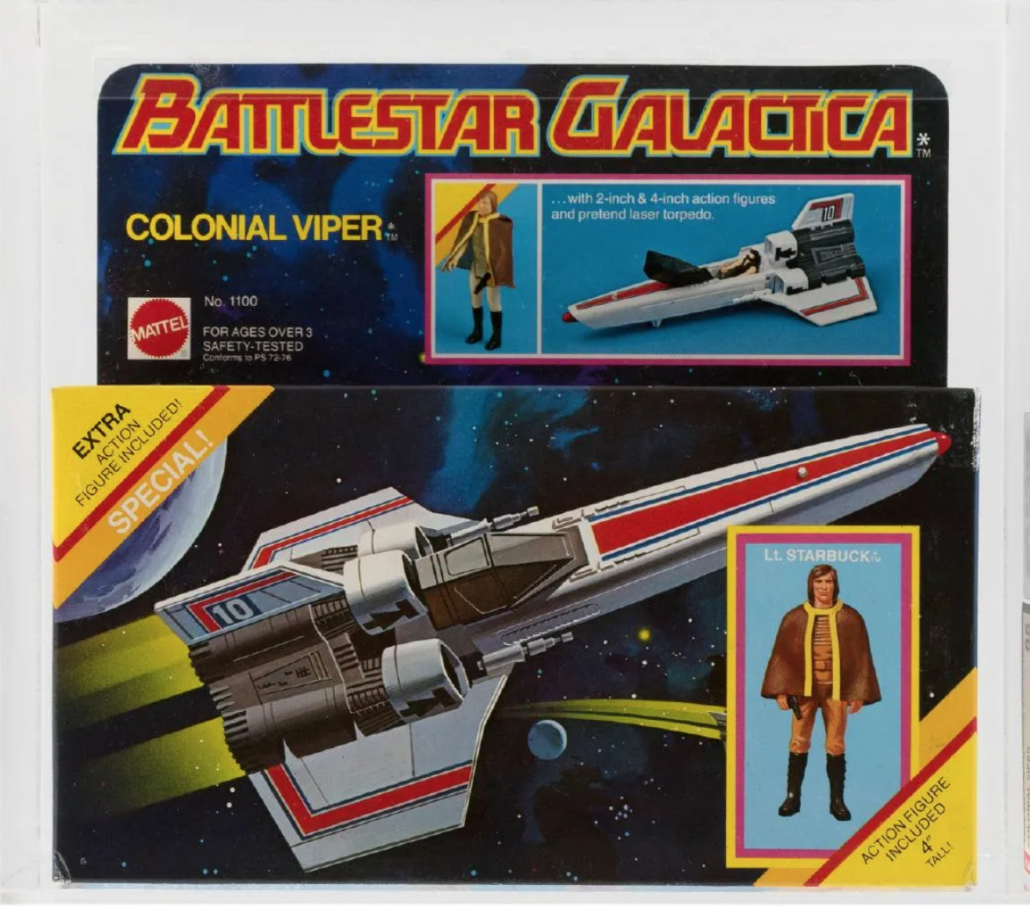 A special offer version of the Battlestar Galactica Colonial Viper ship with its prized Lt. Starbuck action figure realized $2,420 plus the buyer’s premium in March 2018 at Hake’s Auctions.Courtesy of Hake’s and LiveAuctioneers.

Space toys retain a special place in the hearts of collectors of all generations. Some represent technologies that were rendered obsolete before they had a chance to be built, but all these vintage toys have taken on an undeniable aura of retro-cool. “Those old school fans and collectors can see where some of what was once ‘futuristic’ has become a reality with modern day inventions and space travel, while younger generations are still fascinated with what is to come or might be,” Winter said. “While we have things like cell phones and certain robotics in everyday life, using ray guns and traveling in things like the Millennium Falcon are still light years away.” 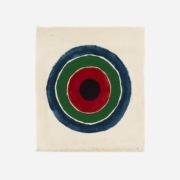 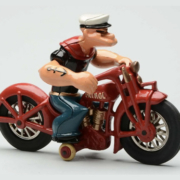