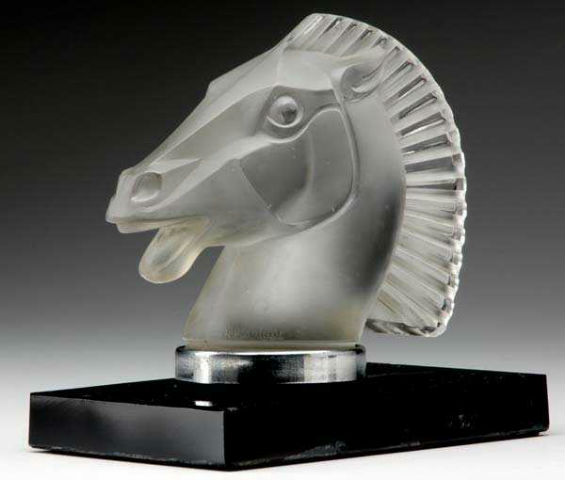 The Roaring ’20s were in a full-throated roar when the esteemed French jewelry designer and glassmaker René Jules Lalique (1860-1945) decided to introduce a line of Art Deco-inspired car hood ornaments that were dubbed car mascots. The basic idea wasn’t new; auto companies had been putting identifying badges, or ornaments, on the front center portion of the hoods of cars almost since the inception of the car itself. They were just waiting for the magic of René Lalique.

Beginning in 1925 until the early ’30s, when the Great Depression lowered the boom on such luxury items, Lalique produced about 30 different types of pressed-glass hood ornaments at his factory in Alsace, France. Most were mass-produced, but a few – one for the Prince of Wales and two for the Citroen car company – were made by special request. For regular customers, the price of an “accessory mascot” ranged from $50 to $1,200.

Each one was made from glass and was rendered in the Art Deco spirit of the day. Lalique made them as naked women, swallows, falcons, saints, eagles, rams, boars, peacocks and frogs. Two mermaids – named Sirene and Naiade – were sold, starting in 1920, initially as statuettes. They were later repurposed for automobiles five years later, when Lalique unveiled his mascots at the Paris Exposition Internationale des Arts Decoratives (where the term “Art Deco” originated). 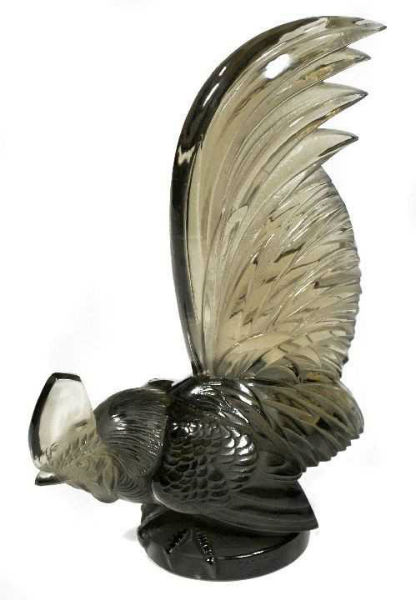 There, he showed off his falcon and two designs specially created for Citroen. The well-to-do instantly went ga-ga for the mascots, and orders began pouring in from the owners of Bentleys, Packards, Bugattis, Mercedes-Benz cars anxious to appoint them with the adorable adornments. To be clear, most chose not to tool around town with an item of value right on the hood of the car. They brought them out only for special occasions, like a concourse d’elegance car show.

Today, of course, the mascots are wildly popular as collectibles, with some examples fetching in the tens of thousands of dollars and even well into the six figures. But a bargain can be had, too. In April 2016, a Lalique mascot sold for $500 at Kaminski Auctions in Beverly, Mass. “That’s because it was very small – only 2¼ inches by 3½ inches,” said Harry Morgan, the director of Acquisitions at Kaminski. “Size, what kind of figure it is, its rarity – all these things factor in.” 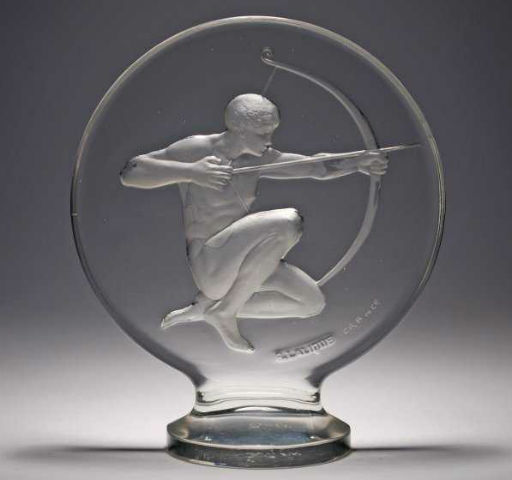 Morgan explained that the most desirable mascots to collectors are the ones that say “R. Lalique” (denoting René) as opposed to ones that just say “Lalique” (made during the later era of his son). Examples made even after that carry less value still. “The company continued to introduce new figures and shapes after René’s death, at the end of World War II, but these aren’t seen as worth much,” Morgan said. “But the most desirable ones of all are able to command up to $300,000.”

The consensus, among collectors and dealers, is that the rarest Lalique car mascot is Renard (the fox), followed by Hibou (the owl). Both are practically impossible to find on the open market and are rarely seen at auction, as only a handful of each was produced. Also, as evidenced by the molds for these mascots, they were quite large, so the cost to make one – even then – was well into the thousands of dollars. 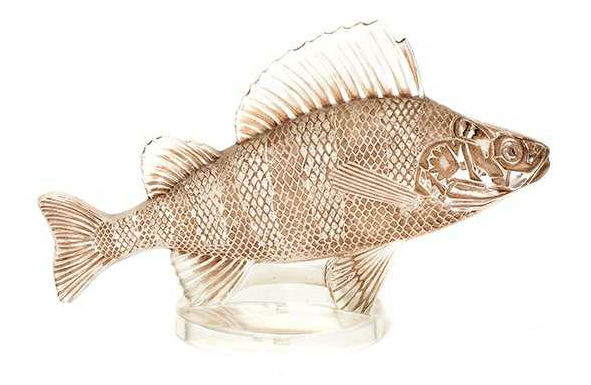 Mary Dowd, president and owner of Myers Fine Art in St. Petersburg, Florida, had two Lalique mascots in her March 2011 auction. She said their enduring appeal to collectors can be attributed to “the classic elegance of design with emphasis on movement,” adding, “Many of the mascots celebrated the female form and women in general. Remember, it was the 1920s, and women had just gotten the right to vote. A whole new freedom for women was taking place.”

Dowd pointed out, “Many of the mascots were mounted to radiator caps and could be lit with a small battery. In the 1920s and ’30s, having an elegant, illuminated glass car mascot designed by René Lalique on the front of a vehicle must have been an incredibly striking visual, especially at night. No doubt it would have drawn attention to the car and car owner.” Some of the mascots actually got brighter as the driver accelerated faster, making for yet another striking sight to see. 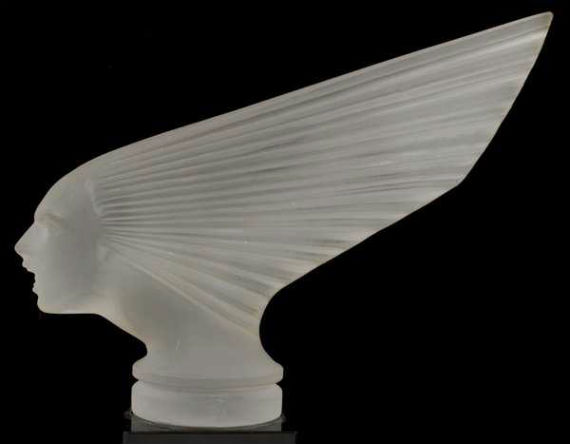 Hood ornaments, in general, enjoyed widespread popularity through the 1950s, and many automakers fitted them to their vehicles. This resulted in a healthy aftermarket, with companies like Desmo and Smith’s supplying accessory mascots to anyone who wanted one. They’re all gone, except Louis Lejeune Ltd. in England. Likewise, all the glass mascot makers – Sabino in France, Red Ashay in England and Persons Majestic in the U.S. – are gone, too. The only one left is Lalique.

The reason for the phase-out wasn’t so much lack of demand or popularity as regulation. In 1968 in the United States, automakers were forbidden from adding fixed, stand-up hood ornaments, as well as spinner wheel protrusions, for safety reasons. Later versions featured flexibly mounted (spring-loaded) stand-up hood ornaments, designed to fold without breaking on impact. These are commonly seen today on Rolls Royce and Mercedes-Benz cars rolling off the assembly line.

René Lalique didn’t have safety concerns in mind when he licensed Breves Galleries of London to fashion metal mounts for his mascots. He was solely interested in making sure his clear, gray, milky-blue, topaz, green and orange-yellow Art Deco glass creations could be proudly mounted to the front hood of a car, making it the joy of the owner and the envy of all who saw the owner behind the wheel.

An excellent book on the subject is Unique Lalique Mascots by G.G. Weiner.