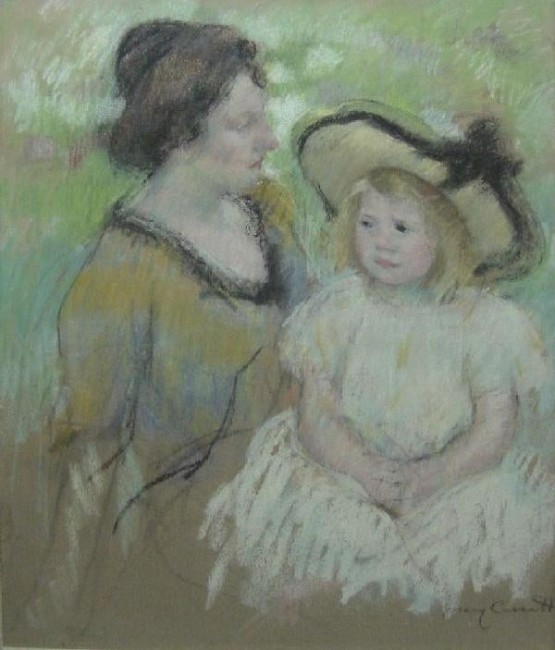 Mary Cassatt, ‘Simone Seated on the Grass Next to Her,’ realized $900,000 + the buyer’s premium in September 2010. Photo courtesy of John Coker Ltd. and LiveAuctioneers

NEW YORK – Renowned painter and printmaker Mary Cassatt never married or had children of her own but she excelled at creating a body of work painting mothers and children with a tenderness and intimacy few other artists have achieved.

In light of Mother’s Day this weekend, the time seems right to look back on the artist’s oeuvre, and her depictions of motherhood in particular, for which she became acclaimed.

Born just north of Pittsburgh, Pennsylvania, in May 1844, Mary Stevenson Cassatt spent most of her painting career in France, where she befriended likeminded artists such as Edgar Degas, Camille Pissaro and Berthe Morisot, who became colleagues and mentors. Reportedly, Degas advised her to focus on painting mothers and children, and in 1889 she created a drypoint, Gardner Held by His Mother, of her nephew. 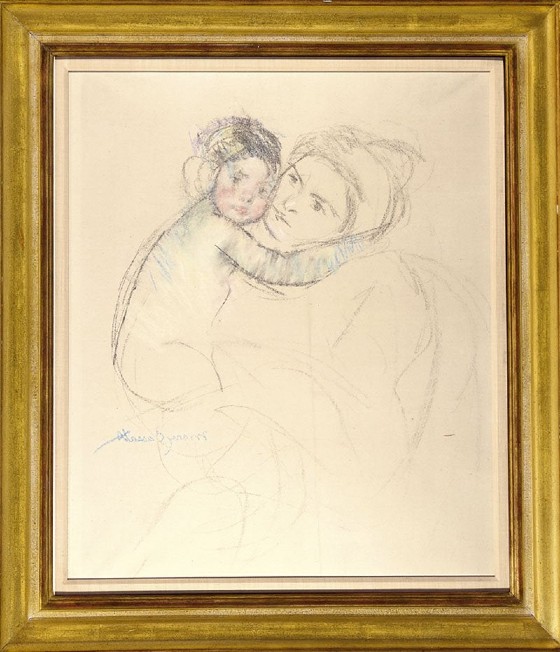 The 1890s were a period of maturity in her career and confident in her opinions of women’s issues and her artistic skills, she embodied the modern woman. As she fought hard to stake her place in a male-dominated art world. She painted beautiful works that offered a modern treatment of the subject of mothers and children. Her works examine the psychological relationship between mother and child and evince a profound intimacy. 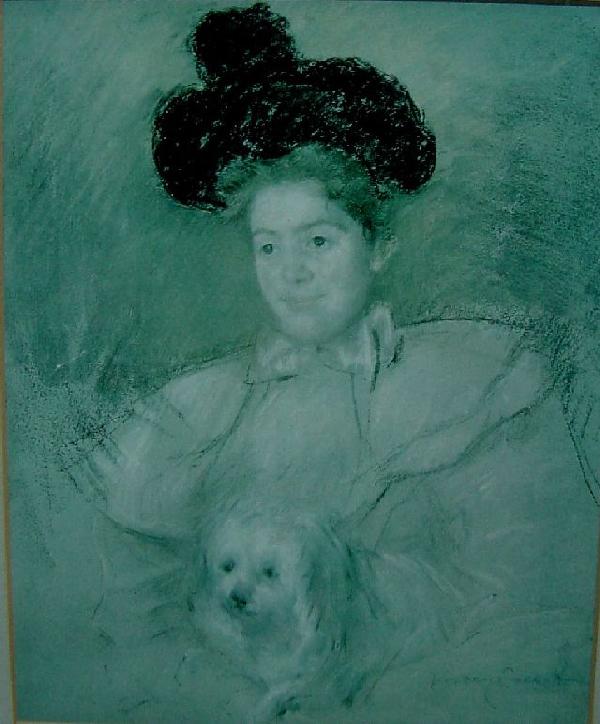 Cassatt’s works can be categorized roughly in three distinct styles with some degree of overlap: depictions of joint activities such as The Child’s Bath or The Crochet Lesson, formal portrait-like scenes such as her 1906 oil painting, Mother and Two Children, which sold at Christie’s in 2005 for $4.7 million, and studies of intimacy. The latter category encompasses the bulk of the artist’s motherhood works. From etchings to pastels and oil paintings, they feature moments of tenderness between a mother and child and are among the most beloved today. Fine examples include the 1890-91 drypoint and aquatint Mother’s Kiss (National Museum of Women in the Arts), the 1891 pastel Agatha and her Child (Butler Institute of American Art) and the 1914 painting, Mother and Child (Metropolitan Museum of Art). 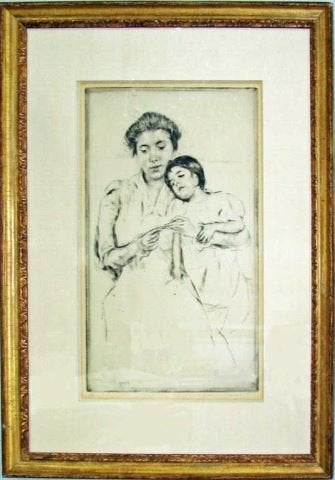 This 1902 drypoint, ‘The Crocheting Lesson,’ earned $12,000 + the buyer’s premium in March 2015. Photo courtesy of Hutter White Auctions LLC and LiveAuctioneers

Cassat was a skilled and quick painter, able to capture intimacy with a simple line that could capture both the curve of a mother’s and child’s arm, adding to the emotional intimacy the sitters shared in works like Mother’s Kiss. Of this work, the National Museum of Women in the Arts wrote, “Observing from real life, Cassatt developed the ability to capture a pose quickly, a necessary talent given the active nature of young children.”

Besides using vivid color and line to portray intimacy, Cassatt also reduced the physical distance between her sitters when posing them. “As the distance between mother and child shrinks, the psychological bond between the two grows,” according to an article in the Women’s Art Journal in 1986. Her works are tender, yet not overly sentimental, in keeping with her modern aesthetic. 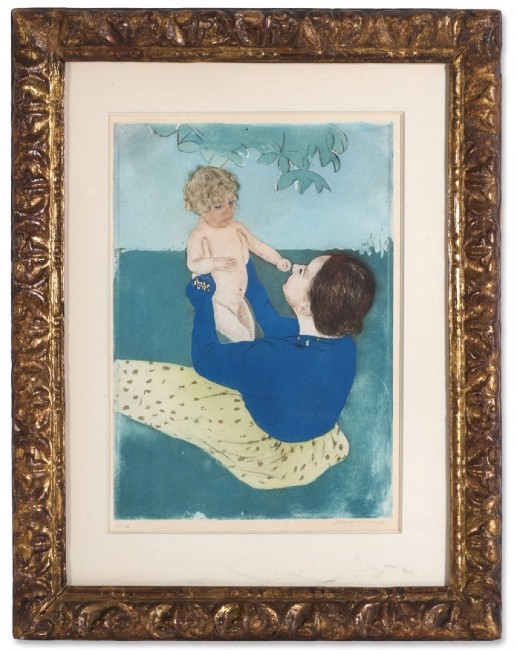 Cassatt’s drypoint and aquatint, ‘Under the Horse Chestnut Tree,’ brought $17,000 + the buyer’s premium in April 2016. Photo courtesy of Millea Bros Ltd. and LiveAuctioneers

Cassatt was said to favor rural peasant people as sitters for her artwork as upper-class women during this period often used nursemaids to take care of their children. By comparison, her sitters were used to caring for their own children so they easily conveyed the strong emotional bonds between mother and child. Among Cassatt’s sitters were people who lived near her in Paris or her country home. Living near her in Mesnil-Theribus, Margot Lux and her mother, Reine Lefebvre, were depicted in several works, while a young girl, Simone, was captured in many studies by the artist.

“Mary Cassatt is one the most notable artists to explore the theme of maternity,” said William Schweller, fine art specialist at Clarke Auction Gallery in Larchmont, New York. “Cassatt’s work elevates the role of the mother within the artistic hierarchy of subject matter and celebrates the relationship between mother and child as an essential component of modernity.” 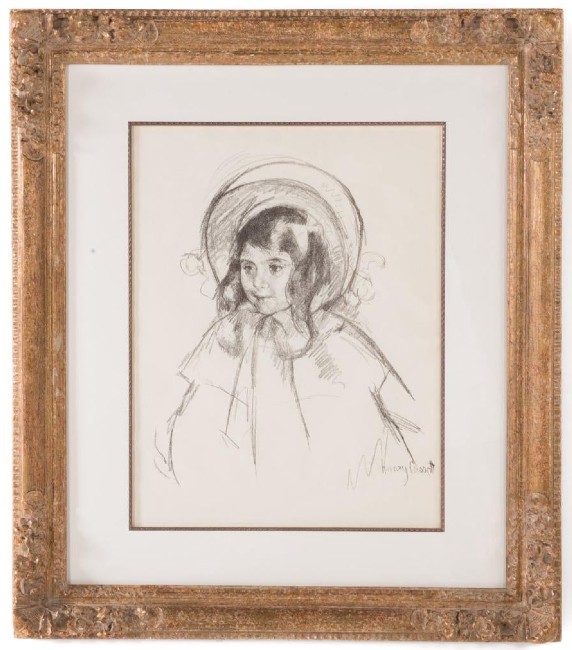 A circa 1904 lithograph, ‘Sara Wearing her Bonnet and Coat,’ realized $12,000 + the buyer’s premium in October 2017. Photo courtesy of Alex Cooper and LiveAuctioneers

In April 2020, Annelise K. Madsen, the Gilda and Henry Buchbinder Associate Curator of American Art, Art Institute of Chicago, wrote an article noting Cassatt is acclaimed for her prolific studies of mother and child in ways that are traditional yet modern. “Among her many paintings, pastels and prints focusing on women and children, The Child’s Bath stands out as a tender portrayal of familial closeness – and also as a bold experiment of color, line and form arranged on canvas.” The composition is striking from the angle of how we see the figures from above to how the figures are composed in the tender scene, the patterns in the background and on the mother’s dress, and the bold use of color.

As a subject matter, motherhood is timeless and few have done it as well as Mary Cassatt, conveying the beauty in life’s quiet moments and routines that are realistic and ripe in emotion.

Portrait by Mary Cassatt acquired by National Gallery Of Art