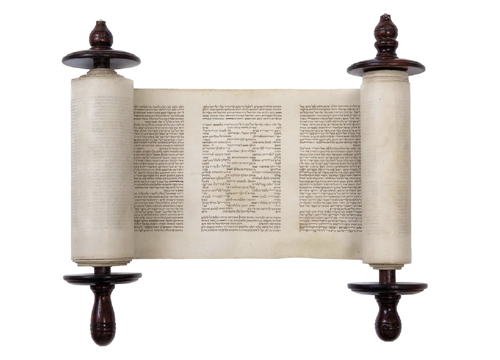 A miniature Sefer Torah created in Poland in the early 19th century made $9,000 plus the buyer’s premium in September 2017. Image courtesy of Kedem Auctions and LiveAuctioneers.

According to the British Library, the Torah scroll is the holiest artifact in Judaism. “It is the physical expression of the Jewish people’s connection with God and contains the Five Books of Moses or Pentateuch (Genesis, Exodus, Leviticus, Numbers, Deuteronomy),” states the library’s website. It must be written in Hebrew by an expert scribe, according to strict rules (no vowels, for one), on sheets of parchment or on what are called “membranes” of leather sewn together to form a long scroll that is attached to two wooden rollers.

A primary benefit on miniature Sefer Torahs is their small size, making them well-suited for traveling. Jonathan Greenstein, founder of J Greenstein & Co. Inc. in Cedarhurst, New York and a Judaica expert, notes that the small size of these Torah scrolls requires a certain level of skill and exceptional handwriting. “The smaller it is, the more difficult it is to write,” he said. “So the smaller it is, the more valuable.” 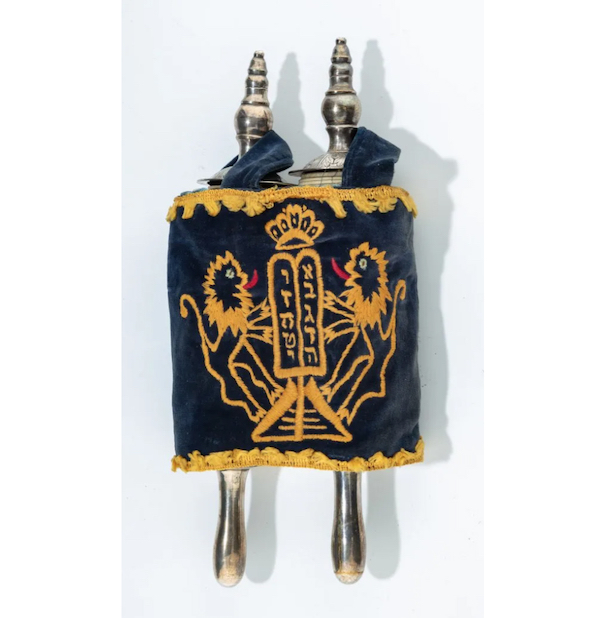 A circa-1850 miniature Sefer Torah, most likely Polish, brought $17,500 plus the buyer’s premium in November 2021. Image courtesy of J. Greenstein & Co., Inc. and LiveAuctioneers.

Greenstein said that when it comes to miniature Torahs, two factors are key: usability and collectability. “Usability means it can actually be used during a prayer service because it’s kosher and usable, and the other one is whether it belonged to a famous rabbi or a famous Hasidic figure,” he said. “If it’s usable and kosher, it’s much more valuable than if it’s not kosher. What makes a Torah not kosher is faded letters, cracked letters, letters being stuck next to each other, damage to words or just not being written properly in the beginning.”

If a Sefer Torah is not usable or not able to be properly restored, its collectible value is generally between $5,000 and $15,000. For examples that lack those issues, it’s a different story. Greenstein notes that new miniature Sefer Torahs can sell for about $100,000. “It’s unlike most antiques,” he said, explaining, “it’s more about the usability.” 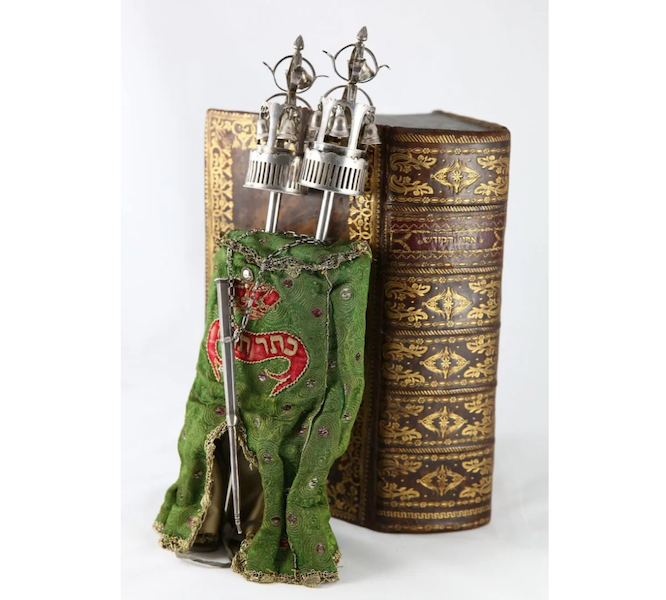 This miniature Sefer Torah, created for journeys, attained $65,000 plus the buyer’s premium in April 2016. Image courtesy of Winner’s Auctions LTD and LiveAuctioneers.

The highest relevant price in LiveAuctioneers’ database is for a miniature Sefer Torah created to be taken on journeys. Made in Germany in 1794, it attained $65,000 plus the buyer’s premium in April 2016 at Winner’s Auctions LTD. Despite its miniature size, the Torah is lavishly decorated and complete with all its original parts. It came with two scroll handles, silver finials, a pointer and an elegant cloth mantle, all of which was designed to be placed in an ark for storage. The ark itself is in the form of a book covered in rich brown leather with gilt illustrations. The attention to detail was such that the user might feel exalted — as if they were sitting in a synagogue rather than a simple room or inn far from home.

According to the auction house, family tradition held that this Torah was commissioned in the late 18th century by a Jewish family whose men worked as merchants. The Torah was passed from father to son and taken on business travels until the Nazis invaded Holland, at which time the then-patriarch hid it in the family cemetery. He was killed at Auschwitz, but years later, his wife found the hidden Torah and other special items and took them to Israel, where she settled.

Greenstein explained that while miniature Torahs can sometimes gain greater value for their elegant silver cases, it is the parchment scroll on which the Torah is written that is most cherished, particularly if a renowned rabbi or person did the writing. In this case, the miniature Torah is complete and written in an attractive Ashenazi hand, and any writing repairs were thought to have been performed by the original scribe. 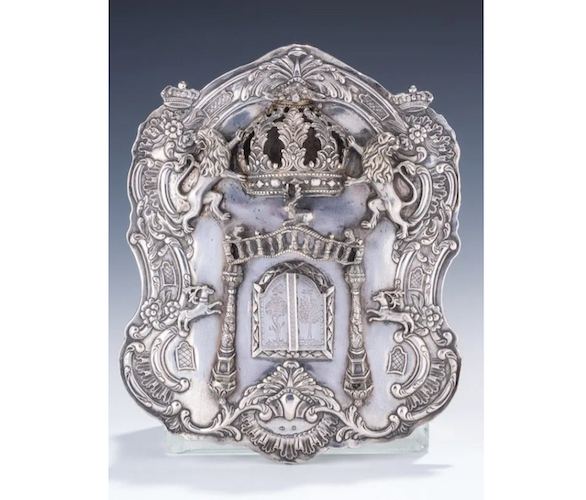 A lavishly-engraved silver Torah shield made in Poland between 1790 and 1810 earned $23,000 plus the buyer’s premium in April 2015. Image courtesy of J. Greenstein & Co., Inc. and LiveAuctioneers.

An example of a miniature Torah that likely sold well for its ornate craftsmanship was a profusely chased silver Torah shield. Made in Poland between 1790 and 1810, it earned $23,000 plus the buyer’s premium in April 2015 at J. Greenstein & Co., Inc. The shield was a very early example of a cartouche-style form and contained a hand-engraved miniature ark with a miniature Torah.

A miniature Sefer Torah dating to circa 1850 brought $17,500 at J. Greenstein & Co., Inc. in November 2021. The symbolism of the lions on the cloth mantle is in keeping with Jewish tradition going back to ancient Israel. The lion, as a symbol of the people of Israel, signifies strength and is cited in the Bible more than 150 times.

The handwriting is everything on these items, however. A miniature Sefer Torah, made in Poland in the early 19th century, realized $9,000 plus the buyer’s premium in September 2017 at Kedem Auctions. What distinguishes this example is its Ashkenazi scribal writing in ink set against its light-colored, thin parchment. The writing includes Tagim ornamentation (artistic duplicates of the tagim embellishing the letters of the top lines). 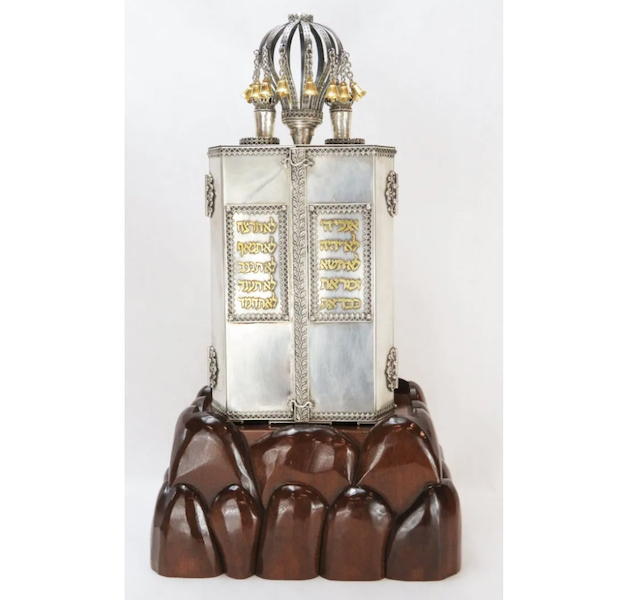 A miniature Torah scroll with a solid silver Torah ark sold for $15,000 plus the buyer’s premium in November 2020. Image courtesy of Appel Auction and LiveAuctioneers.

The writing is equally striking on a miniature Torah scroll with a solid silver Torah ark that sold for $15,000 plus the buyer’s premium in November 2020 at Appel Auction. The scroll comprises 55 membranes that are six inches tall, each made of parchment in Ashkenazic Beit yosef script with black ink. Each membrane has three to eight columns for a total of 248 columns with 42 lines per column.

Writing a miniature Torah is something only expert scribes trained for years can accomplish. Owning one can not only connect the devout with their faith and community, but places in their hands a work of art that is exalting in its magnificence.

Ala. synagogue home to Torah that survived Holocaust 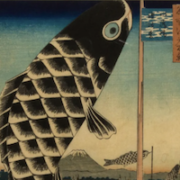 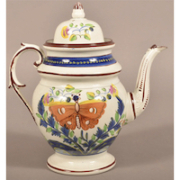 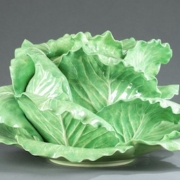 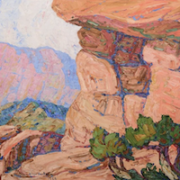 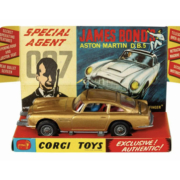