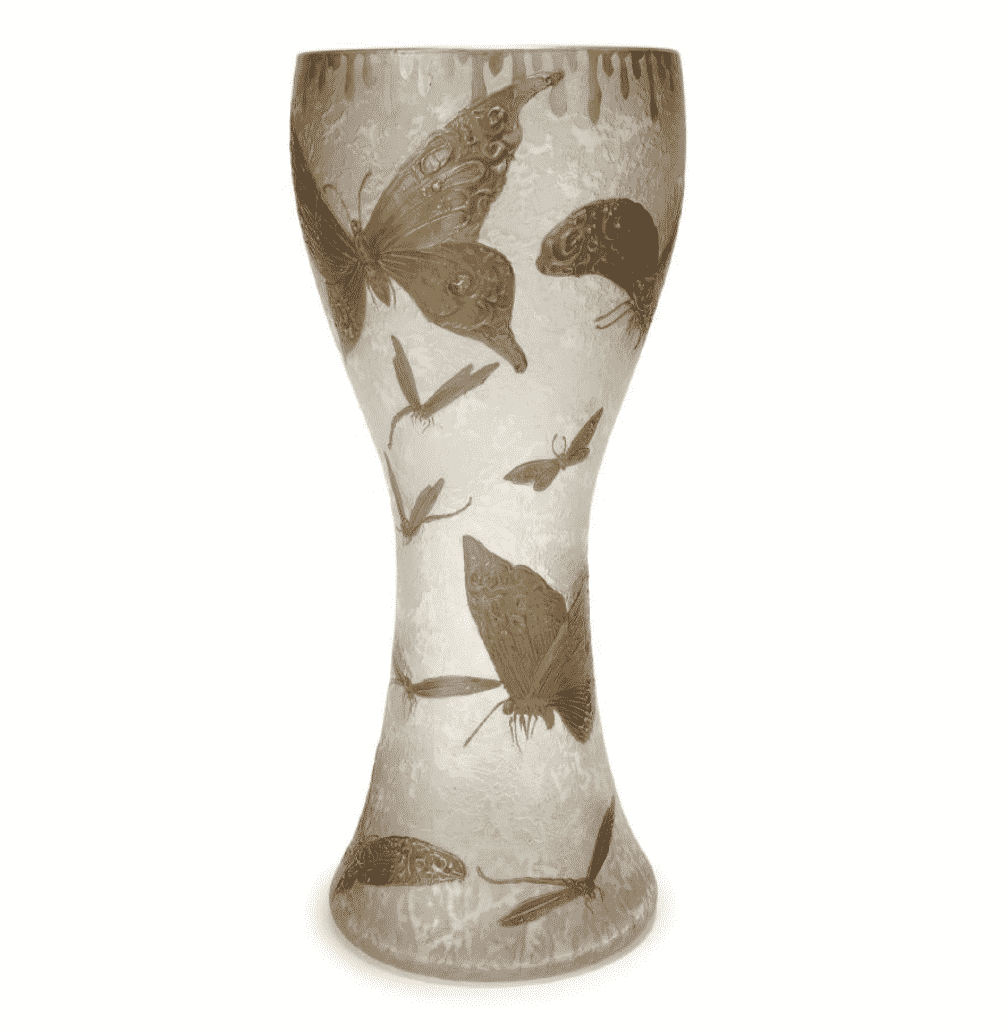 NEW YORK— At the height of the Art Nouveau period, French companies dominated the field of enameled cameo glass, e.g., Galle and Daum Nancy. However, the line of beautiful turn-of-the-20th century enameled glassware known as Mont Joye has its own legion of appreciative fans.

Frequently inspired by natural motifs, vases are the most desirable form of Mont Joye glass and come in many forms: tall and cylindrical, short and bulbous, wide or narrow mouth, flared or ruffled edge lip. Made of quality glass and beautifully decorated, they usually featured red, purple and gold enameled designs set against translucent textured, clear, etched frosted or iridescent glass.

Mont Joye glass was originally made by Cristallerie de La Villette, which E.S. Monot founded in 1850 near Paris. The company later merged with Pantin and then went through a series of changes before being taken over after World War I by Legras & Cie, with whom it is closely identified today. “Legras glass used the ‘Montjoye’ signature for prestigious pieces featuring acid-etching, colored and gold enamel,” according to Divine Style. Many pieces were unsigned but the ones signed “Mont Joye L&Cie” indicated pieces of the highest quality. 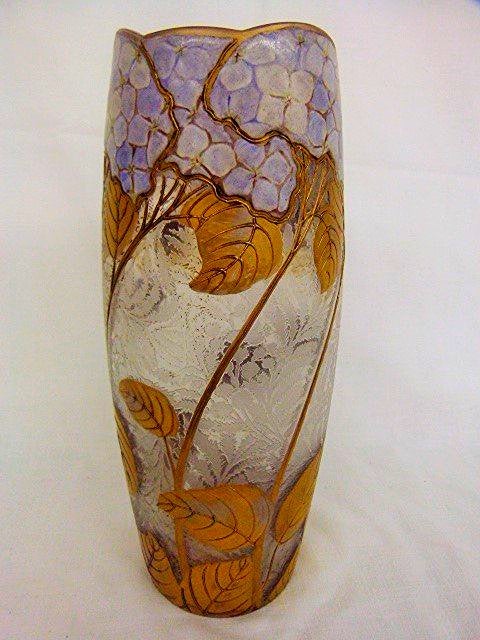 “Intricately cut cameo glass pieces, acid-etched and with enameled imagery – requiring up to five separate firing processes to achieve the desired effect – became the Legras hallmark. Many pieces featuring forested landscapes and the favored themes of the artistic director — irises, orchids and chrysanthemums,” according to Scottish Antiques.

Common Art Nouveau motifs decorating Mont Joye vases were floral designs and lilies, peony, hydrangea, iris and mistletoe were often seen. Japanese influences can be clearly seen in some pieces in terms of decoration but other pieces had highly stylized flowers. While most have straightforward rims, some were unusual such as this amethyst-colored vase with a peony design, having a flared rim that is gilt-decorated. It brought $375 + the buyer’s premium in March 2011 at Auctions Neapolitan. Ruffled-edge rims are also quite collectible such as this example or this one that has a crimped rim.

Later examples made in the 1920s and 1930s had more stylized decoration befitting the Art Deco aesthetic, such as this monumental Auguste Heiligenstein Legras Mont Joy acid-etched glass vase at 21 inches tall, circa 1931, which earned $650 + the buyer’s premium in June 2020 at Heritage Auctions. 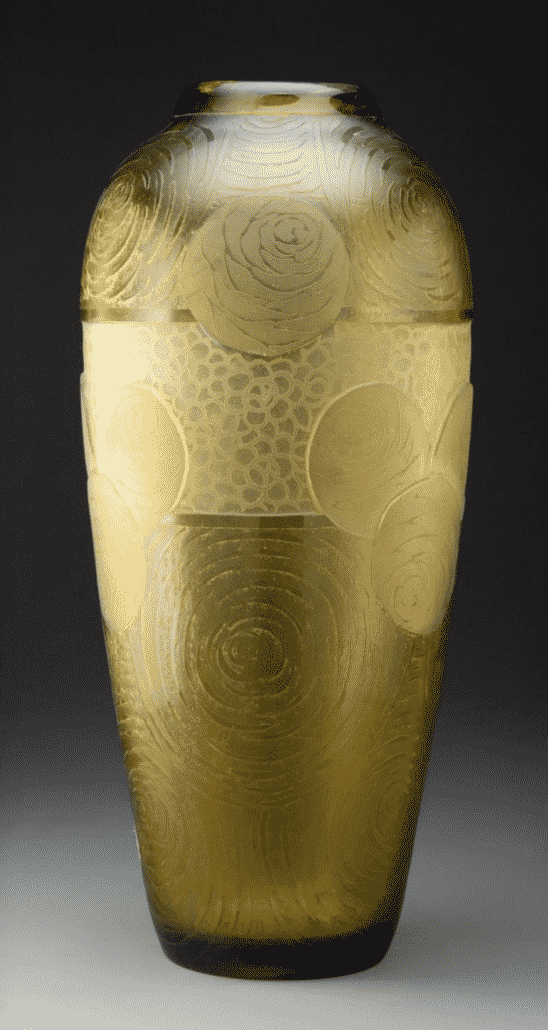 Most Mont Joye vases found today are on average between 6-8 inches tall, as taller ones were more likely to be broken. Tall and beautifully decorated vases are thus highly desirable today with collectors. A tall “banjo” vase in celery green, measuring 26 inches tall, signed Mont Joye in gold, holds one of the highest prices on LiveAuctioneers’ price results database. Carved thistles and leaves decorated in shades of gold and bronze run up the sides of the vase that sold for $2,700 + the buyer’s premium in February 2007 at JK Galleries, Inc.

A notable Mont Joye example in a museum collection is this acid-etched vase with autumn foliage, standing an impressive 26 inches tall, at the Corning Museum of Glass in upstate New York. 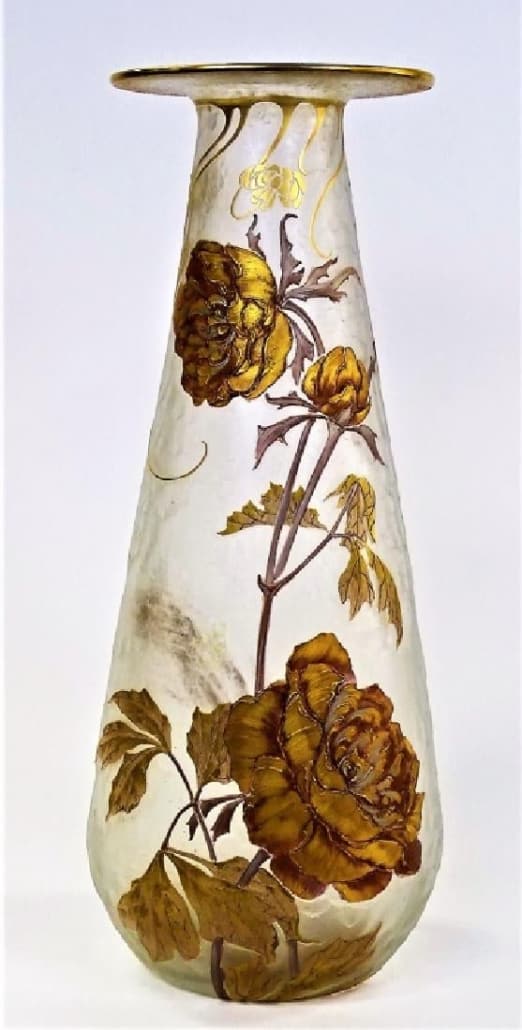 Other tall examples sold in recent years include this 19¼-inch tall chipped ice vase in sea foam blue with blue leaves and berries that fetched $450 + the buyer’s premium in July 2014 at Elite Decorative Arts. This stippled chipped ice pattern was a well-used and recognizable one for the company.

Besides vases, there are a host of other beautiful enameled Mont Joye glass items, such as this enameled biscuit jar with raised enameled flowers and a chipped ice pattern resembling rows of butterflies that took $450 + the buyer’s premium at Premier Auction Galleries in January 2017. A floral enameled circa-1910 lamp with gold trim, standing 30 inches tall, realized $650 + the buyer’s premium in May 2014 at Bruhn’s Auction Gallery.