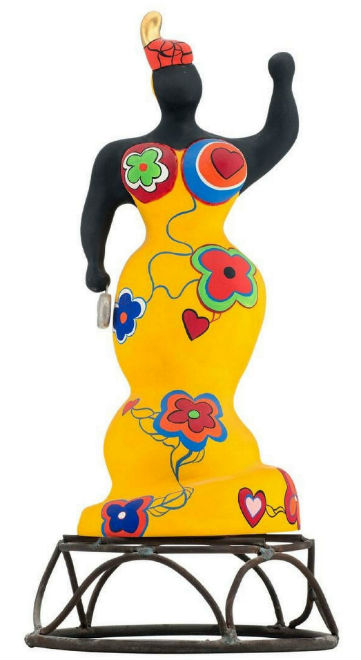 She soon became a star. Through the early 1960s, she invited astounded admirers to fire at her “shooting paintings” – composed of scissors, eggbeaters and doll arms attached to white, thickly plastered boards – with pistols, rifles or miniature cannons. This not only shattered the artworks’ textured reliefs, but also exploded concealed, paint-filled balloons, streaking the boards with hit-and-miss streams of color.

Saint-Phalle’s “executions” not only merged destruction with creation, but also art with performance. “Performance art did not yet exist,” she wrote, “ but this was a performance. Here I was, an attractive girl (if I had been ugly they would have said I had a complex and not paid any attention), screaming against men in my … shooting.” Though admittedly therapeutic, these aggressive, collaborative performances eventually ceased. 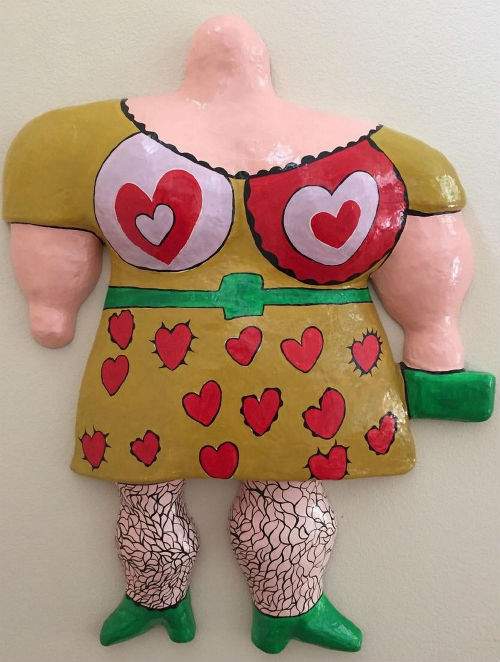 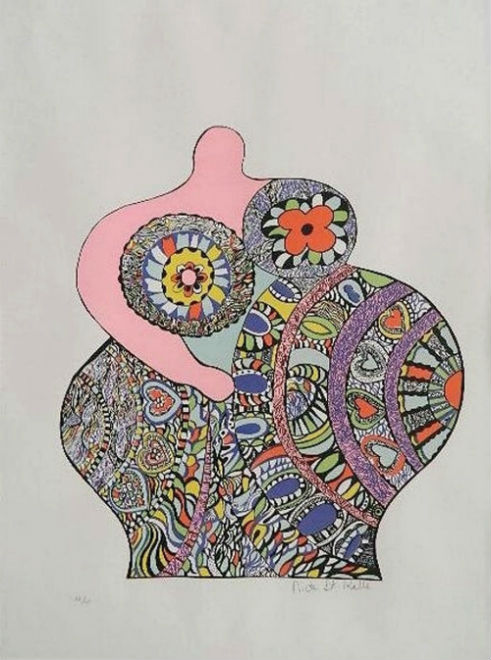 Saint-Phalle’s works grew in size along with her reputation. In 1966, as women were re-imagining their societal roles, Saint-Phalle, collaborating with Tinguely and Per Olof Ultlvedt, created Hon (“she” in Swedish). Visitors accessed Hon, a monumental, rotund, reclining “nana” (a “broad” or “dame” in French) from between her legs. 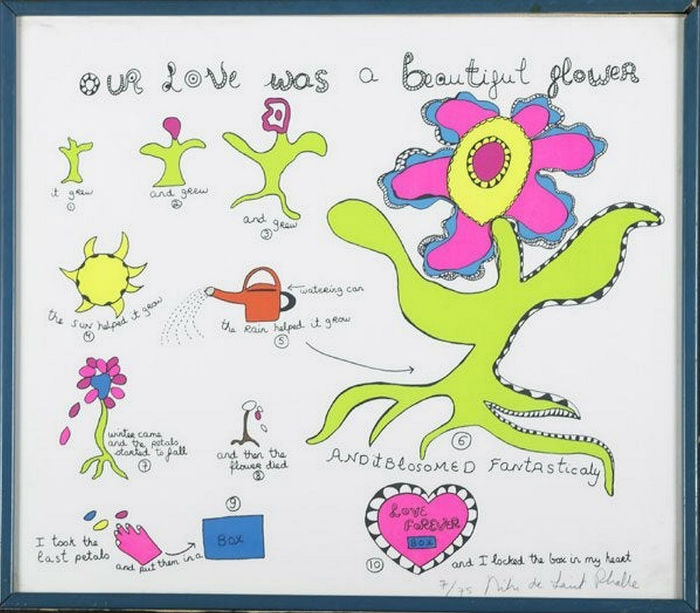 “Our Love was a Beautiful Flower,” framed screenprint in colors, signed and numbered 7/75; 19 3/8in x 22in, circa 1970. Realized $1,000 + buyer’s premium. Image courtesy Rago Arts and Auction Center and LiveAuctioneers

During the Civil Rights Movement, Saint-Phalle also created black Nanas. Her Black is Different screenprint (1994), for example, depicts a powerfully exuberant Black Nana amid hand-written, curlicued comments: “I saw a fat woman on the beach today and she reminded me of a great pagan goddess. I have made many black figures in my work. Black Venus, Black Madonna, Black Men, Black Nanas. It has always been an important color for me … Black is me now.” 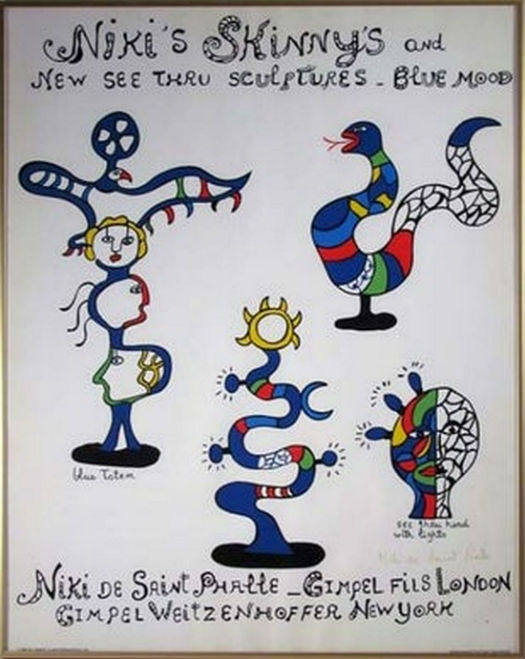 Other graphics crawl with multihued, childlike, delightfully frightening insects, worms, serpents, spiders or bugaboos. Narrative ones, like You are my lover for ever and never (1968), Why don’t you love me? (1968) and Our Love Was a Beautiful Flower (1969), evoke entries in a teenage diary. 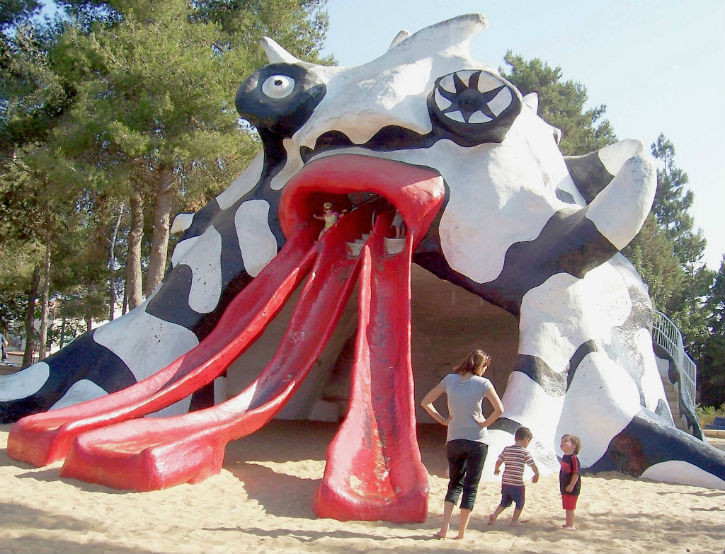 To finance this Garden of Eden, Saint-Phalle created a fragrance in her name for the Jaqueline Cochran Co., New York. She also designed its deep-blue glass flacon, its gold cap bearing two frolicsome snakes entwined. 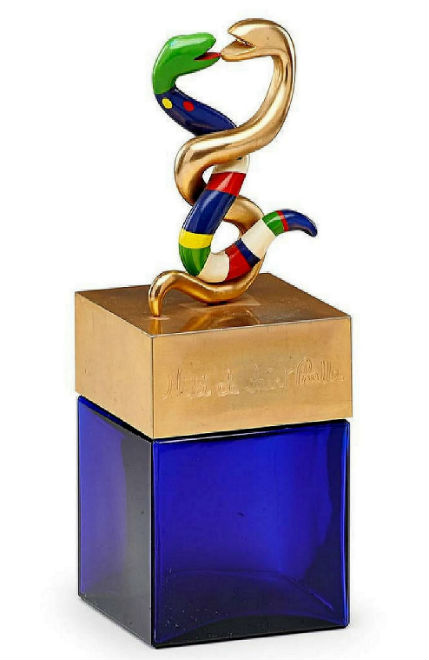 Saint-Phalle died of emphysema in 2002, possibly due to decades of inhaling chemical fumes, a byproduct of her creations. In addition to her whimsical outdoor installations, her works enliven major art institutions throughout the world. 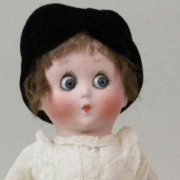 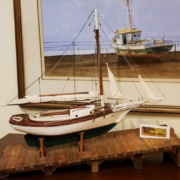 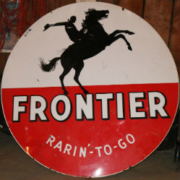 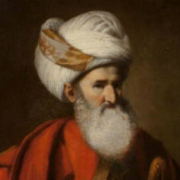 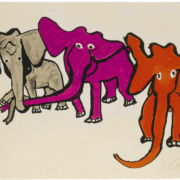 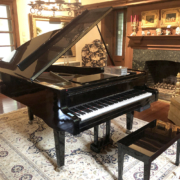 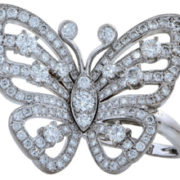 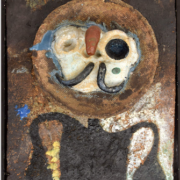