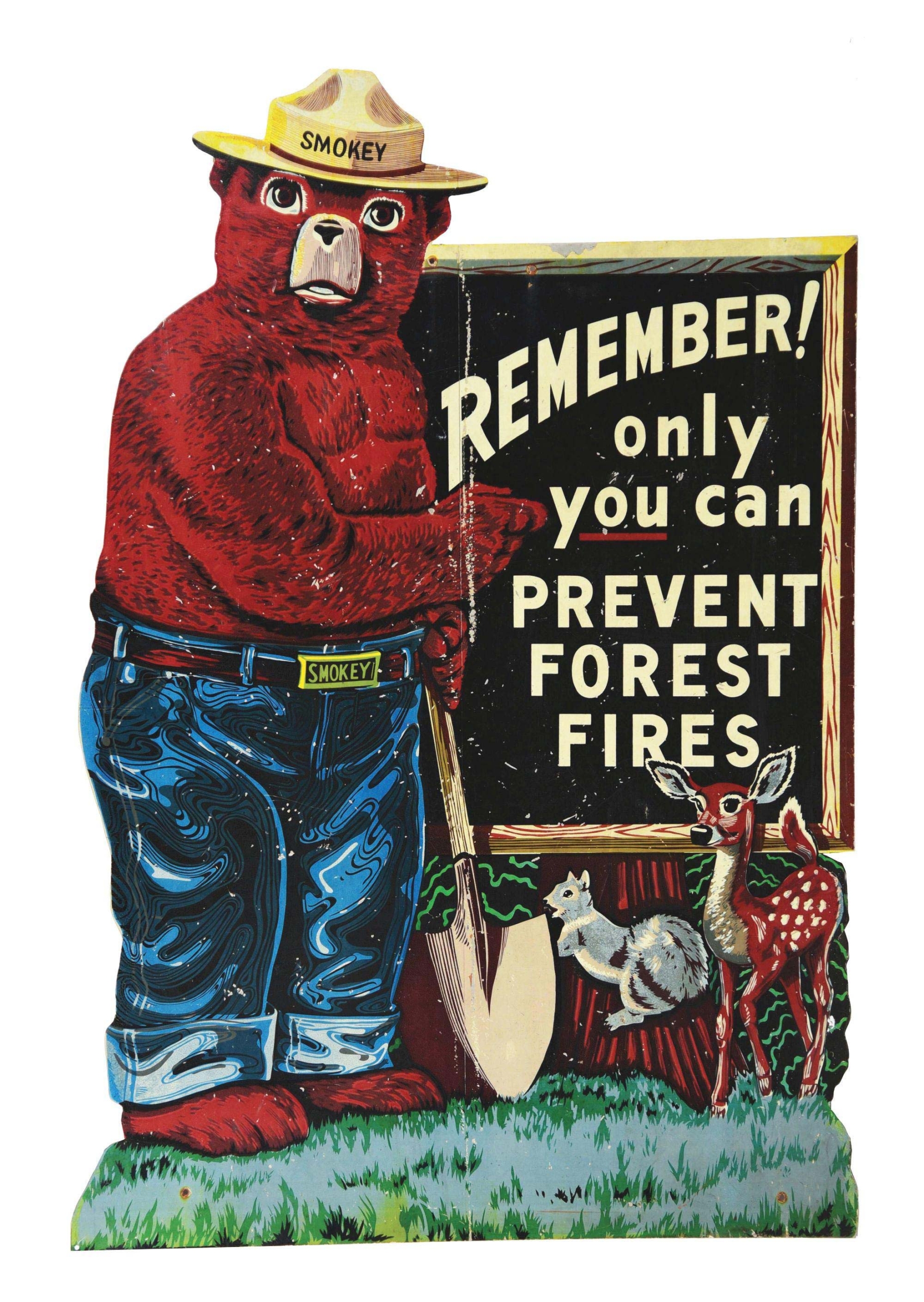 NEW YORK — One of the most beloved, and enduring, figures in public advertising campaigns is Smokey Bear, or Smokey the Bear, as he has come to be known by many.

Even though his catchphrase has changed over the years, he looks much the same, outfitted in a ranger’s hat, belted blue jeans and always carrying a shovel. His messaging remains on point and is as relevant as it was in 1944 when he was introduced.

Any good ad mascot deserves merchandising so it’s no surprise that there are Smokey-licensed or inspired toys, teddy bears, banks, cookie jars, lunch boxes and more that collectors seek. Original highway signs featuring a life-sized Smokey and his catchphrase are also popular and have brought about $4,000 to $7,000 at auction.

First off, let’s address his name. While it has always officially been Smokey Bear, many people (this writer included) grew up thinking it was Smokey the Bear. This honest mistake came about from a popular song written in 1952 by Steve Nelson and Jack Rollins. Reportedly, in order to keep a certain rhythm, they added the “the” into his name, causing many of his fans to confuse his name.

Smokey’s genesis as an advertising mascot/icon predates this song by a dozen years. Created as part of a national campaign to combat forest fires caused by people, the Wartime Advertising Council and the United States Forest Service licensed Smokey’s creation in August 1944 for a fire prevention campaign launching in 1945.

They turned to leading illustrator Albert Staehle, who created several memorable animal-based advertising posters such as Elsie the Cow for Borden, the swan for Swan Soap and cats for Carter’s Ink. He drew a poster depicting a bear clothed as a forest ranger pouring water onto a campfire and Smokey Bear was born. His poster was so popular he designed the next two years’ campaign posters and Smokey became an ad icon, appearing on posters, TV commercials, cards and merchandise.

The ad campaign is reportedly the longest-running public service advertising campaign in the United States. In keeping with the continuing threat of wildfires (not just forest fires), his catchphrase went from the original “Smokey Says – Care Will Prevent 9 out of 10 Forest Fires” to the classic “Remember… Only YOU Can Prevent Forest Fires” in 1947, and in 2001, it became “Only You Can Prevent Wildfires.”

While Staehle created Smokey’s iconic look, other artists made their mark on the character (pun intended), most notably Rudolph Wendelin. From around 1979 into the early 1990s, Wendelin illustrated the character. A gallery of his images can be seen online at the US Department of Agriculture website, and many of his original “Smokey” paintings are in the agency’s collection, as well as in museums. 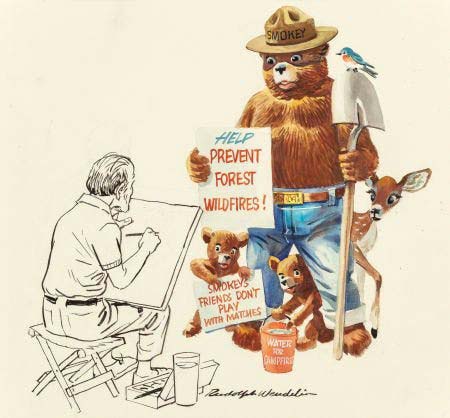 Capitalizing on Smokey’s popularity, several companies made Smokey Bear toys, including Ideal, which made several versions of a Smokey the Bear plush stuffed teddy bear with a rubber face in the 1950-60s, ranging from 15 to 17 inches tall.

A Japanese toy company, Nomura, made tin-litho battery-operated toy Jeep vehicles in forest ranger green and driven by Smokey. They have auctioned for a few hundred dollars to just over $1,000. 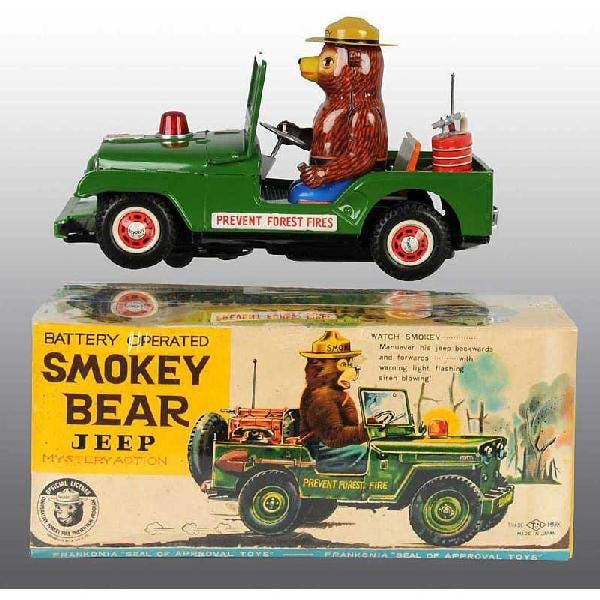 Aluminum lunch boxes with Thermoses were once a staple for elementary school-age children. King Seeley made a Smokey Bear one with a whimsical scene of him surrounded by his animal friends that looks ripped from a scene out of Disney’s Bambi. They now sell for several hundred dollars each. Smokey cookie jars bring in the range of $50-$100. 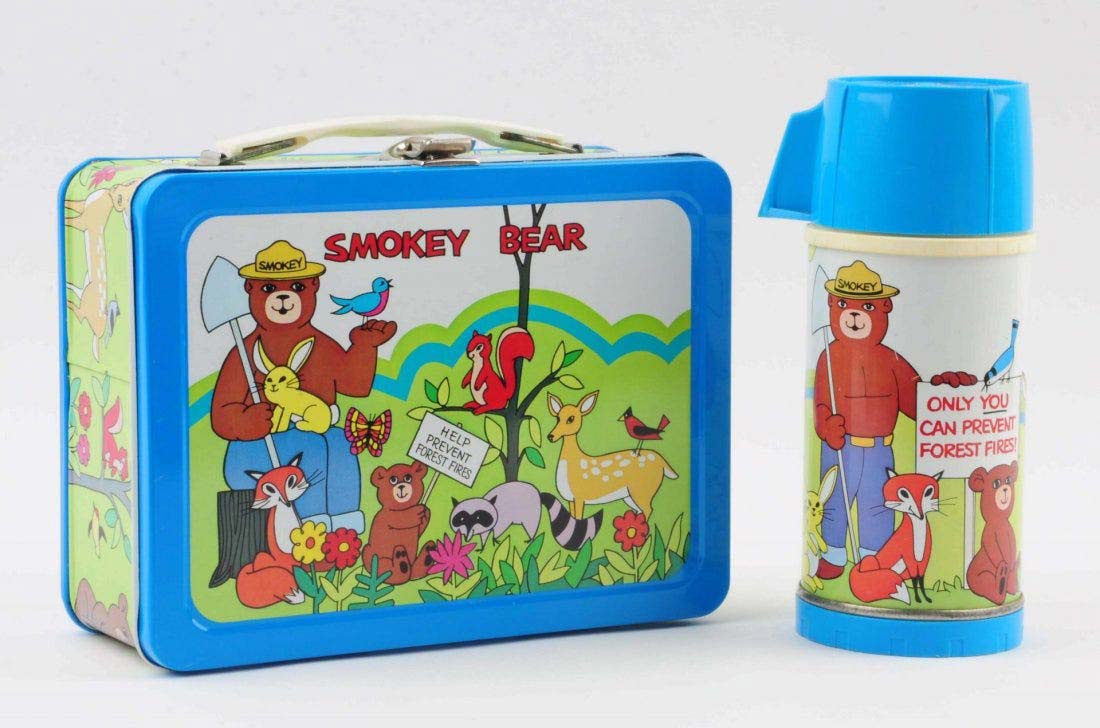 The legend of Smokey even extends past collectibles and the printed page into real life. In the spring of 1950, a person manning a fire tower in New Mexico’s Capitan Mountains reported smoke to a nearby ranger station. In the fire’s aftermath, a bear cub was found clinging to a scorched tree with his legs and paws burnt. He was rescued, treated for his injuries and his story was widely reported. “Smokey received numerous gifts of honey and so many letters he had to have his own zip code,” according to the Smokey Bear website. He appeared in the ad campaign also and lived out his days in the National Zoo in Washington, until 1976 when he died. His body was returned to New Mexico to the Smokey Bear Historical Park.

As with the advertising mascot, Smokey’s prudent forest conservation message lives on.