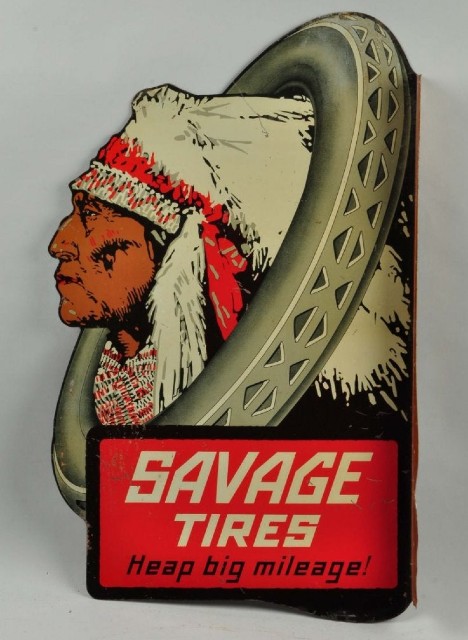 NEW YORK – The petroliana antiques market offers a striking diversity, including oil cans, gas pumps and globes, road maps and more. Among the most desirable, however, are tire signs.

The variety of these signs is seemingly endless with round, oval and rectangular-shaped examples, but signs die-cut in the form of a tire or iconic item associated with a particular tire company are popular.

John Mihovetz, a department head and an expert in automobilia and petroliana at Morphy Auctions, said when it comes to early tin lithographed flange signs, the majority of them were die cut.

“The better the graphic and the more unique the shape, the more money it’s going to be worth,” he said, noting that graphics, subject matter, rarity and condition are what determines a good price. “Something like the Savage Tires flange tire sign where you have this Native American that is in silhouette [above]  or like Beacon Tires signs where you have the die-cut lighthouse [below] … they rarely come up for sale and they have the most beautiful graphics.” Obscurity, good coloring, subject matter and the uniqueness of the graphics add value. 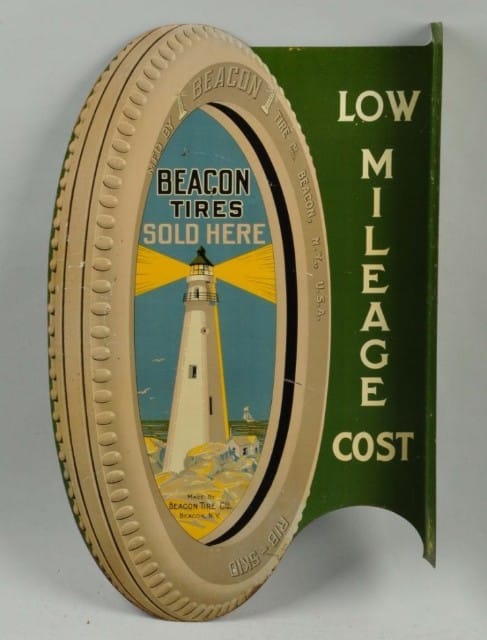 The most valuable tire signs date from the 1910s into the early 1930s, but tin litho signs from this era are hard to find in extremely high grade. Over time, the tin signs, placed along roadsides, scratched and rusted easily.

Today, there are behemoth tire companies like Goodyear and Firestone that are household names. In the early 20th century, however, there were many smaller, independent tire companies and because most no longer exist, collectors avidly seek their signs. Some makers were acquired by larger companies as is the case with Kelly Tires, said to be the oldest American-made tire brand. Launched in 1894 in Springfield, Ohio, Kelly Tires was bought out by Goodyear in 1935 and is still making tires as a Goodyear subsidiary. Early Kelly Tires signs featuring a fashionable young woman driving a car and waving or sitting on one of its tires to prove its strength became the standard in the early 1900s. Advertising has long used pretty women to sell its products and tire makers were no exception. 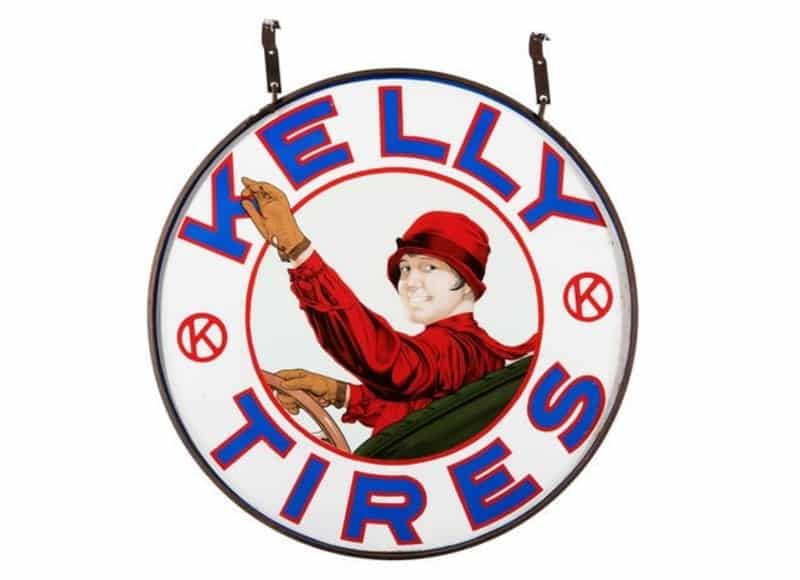 A 42-inch, double-sided Kelly Tires porcelain sign in the original ring sold at Mecum Auctions for $110,000 + the buyer’s premium in October 2016. Photo courtesy of Mecum Auctions and LiveAuctioneers

Whether featuring a small or large company, tire signs are a hot commodity. Among them is Norwalk Tires, which was founded in 1914 in Norwalk, Conn. and filed for bankruptcy in 1949. Savage Tires began in 1901 by Arthur Savage, who filed the first American patent for radial tires in 1916 and was based in California. Its signs are easily recognizable for its use of a Native American man, seen in profile, wearing a feather headdress. 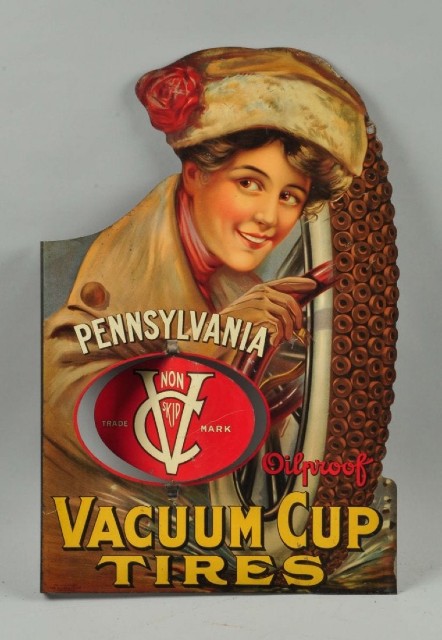 Also popular with collectors is Beacon Tires, whose die-cut signs are characterized by a lighthouse. No matter where you lived in America, there was likely at least one small tire company nearby in the early 1900s that would be familiar to you but that someone two or three states away would likely have never heard of. Among rare examples with great graphics are those by Defiance Tires & Tubes, which reportedly produced only a handful of die-cut tin flange signs featuring a tiger sitting in the center of a tire. A fine example sold for $8,000 at Route 32 Auctions in August 2019.

“That’s another part that is really unique about that era is that there were so many different small independent brands,” Mihovetz said. “You had brands like Racine Tires, Empire Tires … so many different variations of these early brands that didn’t last for very long. Most probably didn’t make it through the Great Depression.” 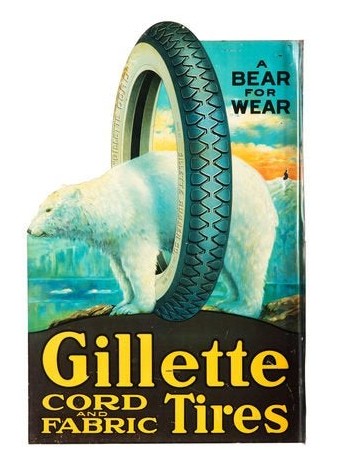 Porcelain signs became the industry standard after World War II, largely replacing tin litho signs. “People started to understand the durability of porcelain as well as that it would be a lot cheaper,” he said.

New collectors should do their research and given the number of auction companies that publish past catalogs, including digital ones, it’s easy enough to look up tire signs by brand, compare examples and see past prices. “I try to steer new customers into buying early colorful good condition pieces in the highest grade they can afford,” Mihovetz said, adding that doing research before buying is important. “Don’t buy first and ask questions later. Figuring out what you are really into and buying what you like in the highest grade that you can will save you a lot of money in the long run.” 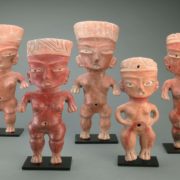 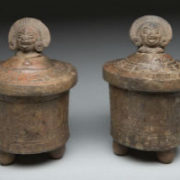 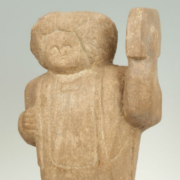 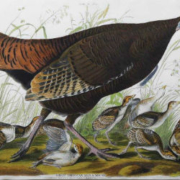 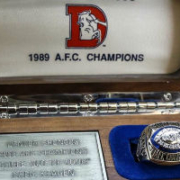 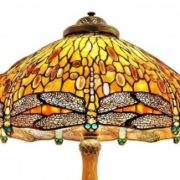 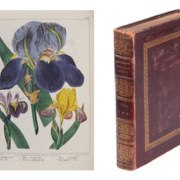 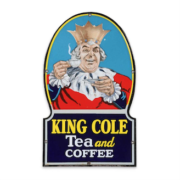