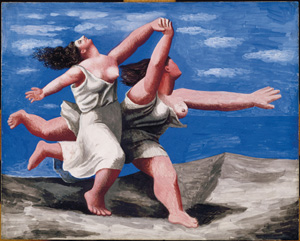 Expectations grow in Milan two days before the opening of the highly anticipated exhibition at Palazzo Reale “Picasso: Masterpieces from the Musée National Picasso Paris.” The show gathers more than 250 works, including paintings, drawings, sculptures and photographs, and covers all the creative periods of the Spanish master. It was curated by Anne Baldassari, director of the French museum and one of foremost experts of Picasso. Some of the works have never been exhibited outside of the museums before this touring exhibition, which was organized while the museum undergoes a multiyear renovation. The loan fees for the exhibition will help financing the renovations, even if this loan policy has already sparked off polemics and critics on the part of French curators who claimed the commodification of this national collection.

The Musée Picasso was born in 1979, six years after the death of the artist, thanks to a French law called “dation.” This law, in force since 1968, allowed the heirs of the artists to pay inheritance tax in kind, handing over to the state 203 paintings, 158 sculptures, 29 relief paintings, 88 ceramics, 1,500 drawings and 1,600 etchings, as well as manuscripts and works of pasted paper. These works belonged to the artist’s collection, to the ones he had not parted from. In 1990 the state inherited another collection of Picasso’s works: the one of his last wife. Jacqueline Roque, who had committed suicide in 1986. Other works in the museum come from Picasso’s collection of his contemporaries and from his archive of documents.

Picasso’s exhibition in Milan is now the third major Picasso exhibition in the city. The first one goes back to 1953 and took place in the same museum. The show went down in history because the organizers succeeded in bringing to Milan Guernica, which at that time was at MoMA in New York. Picasso had initially been reluctant, being afraid of possible attacks on the part of the Franco government. Eventually the artist accepted, on one condition: the Hall of Caryatids, where the work was to be installed, should not be renovated. It had to carry the signs of destruction caused by war, and to serve as a warning against the madness of war. The second exhibition in Milan took place in 2001.

Highlights from the exhibition include The Celestina (1904), a work from Picasso’s blue period, in which he expressed suffering and death through the livid blue color; Man with a mandolin (1911), an important example of cubist decomposition; Portrait of Olga (1918), a picture of his first wife Olga Khokhlova, a dancer he had met frequenting the Russian ballet, who became the mother of his first son, Paul. Paul is the subject of another important work on show: Paul as Harlequin (1924). The child is represented with a melancholic gaze and dressed as Harlequin, a figure that fascinated Picasso and comes up very often in his production.

All exhibited works show the ability of Picasso of continuously reinventing his style. As the curator said: “The collection of the Musée Picasso represents Picasso’s work in progress, his surprises, his leaps forward and his regrets, his meanderings and his retreats.” A work such as Two women running on the beach (1922) testify his return to order and figuration after the cubist decomposition, it shows the influence of classicism. But later, Picasso called everything into question again. We can see it in Portrait of Dora Maar (1937), the photographer, Surrealists muse and Picasso’s lover for many years who was always represented by the artist as a woman in tears. From the same year, 1937, is The Supplicant. It was a crucial year for Picasso, the year of Guernica. The Supplicant falls into the same contest. The crying woman recalls the figures of the masterpiece in which Picasso denounces the atrocities of war, but it reflects also his love life and the conditions in which he reduced his partners.

The exhibition includes many photographs by famous photographers, as well, who contributed to increase the cult of personality around Picasso. There are works by Jean Cocteau, Man Ray, Brassaï and Dora Maar, who shot the production phases of Guernica, and then later works by Irving Penn and David Douglas Duncan. A special exhibition about Duncan’s photographs of Picasso will be mounted at Instituto Cervantes from Oct. 10 to Jan. 10.

Expectations related to the Milan’s show are high also in reference to the number of visitors. Before coming to Milan the show was at the Art Gallery of Ontario in Toronto, where it drew more than 300,000 visitors. For the exhibition in Milan there are already 100,000 bookings. 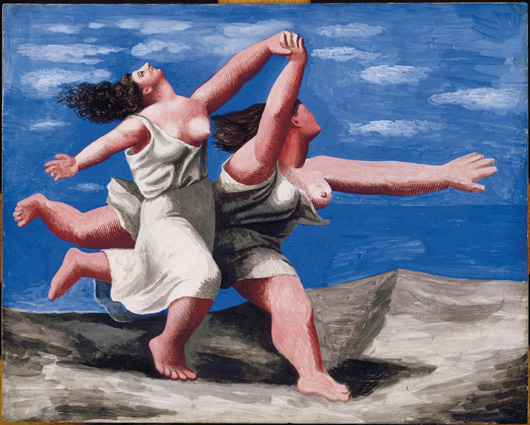 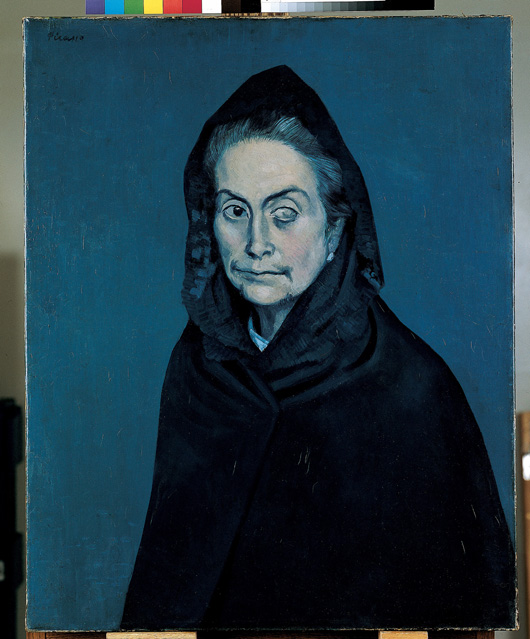 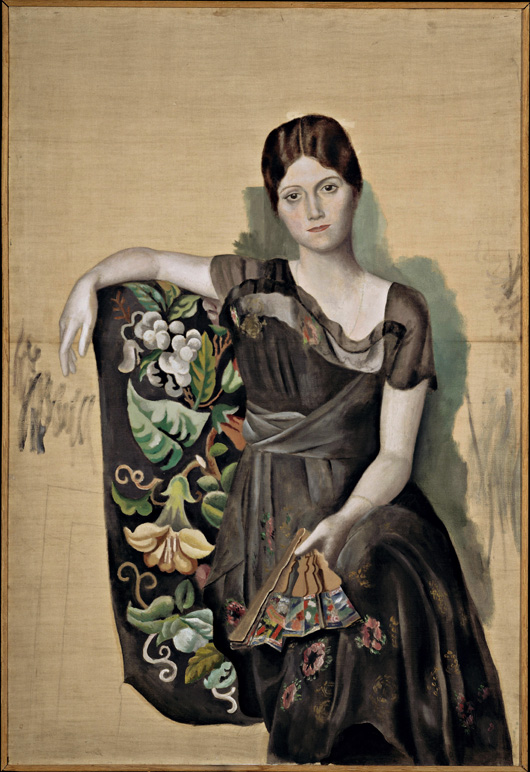 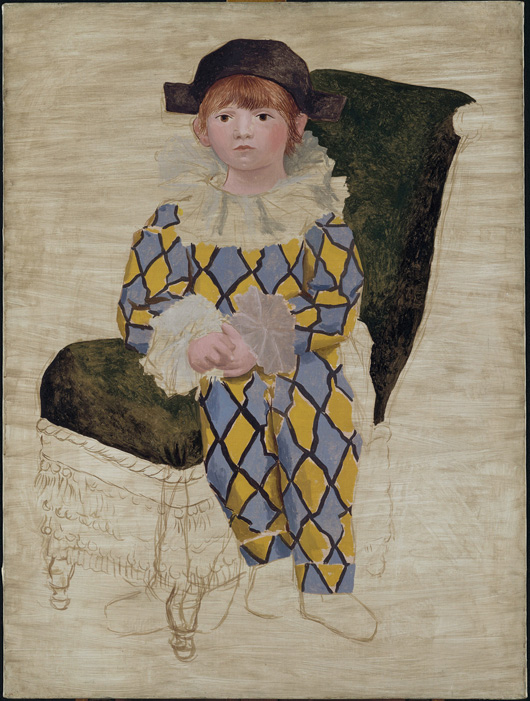 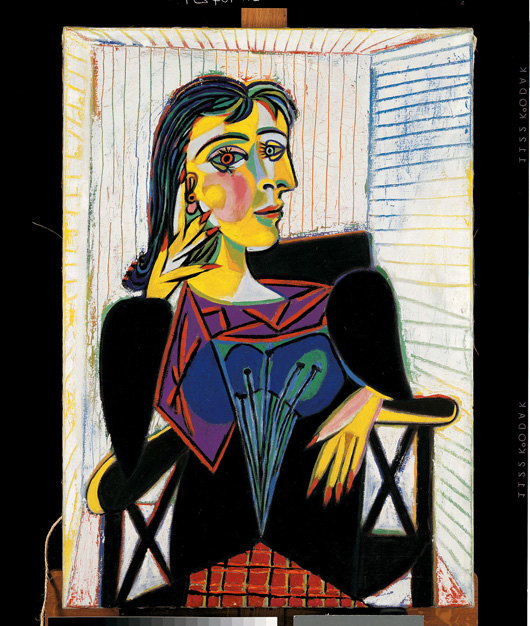 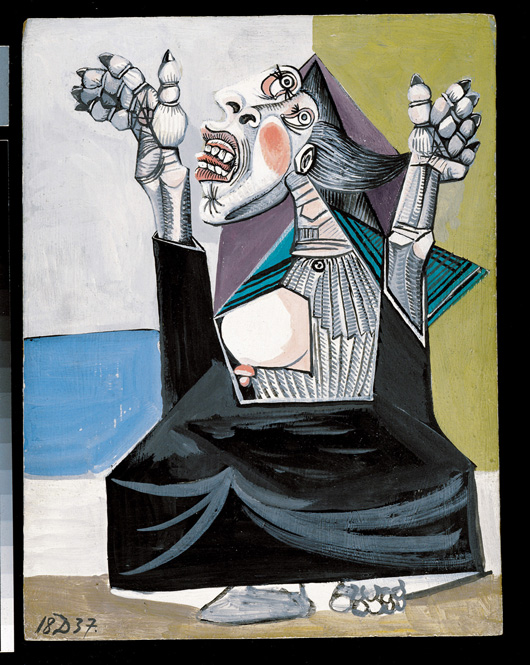 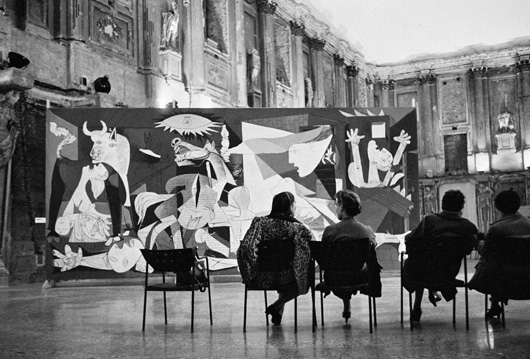 Guggenheim Museum to show less-colorful side of Picasso