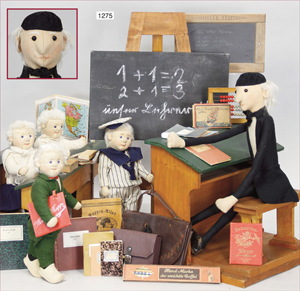 The rare School set by Steiff with its delightful tiny details like a functional abacus and a chalkboard. Photo courtesy Ladenburger Spielzeugauktionen.

LADENBURG, Germany – Seeing a museum close is never a happy event. But when Katharina Engels shut the door of her doll and toy museum in Rothenburg ob der Tauber in January, it turned out to be a joyous culmination of her life’s work. For 30 years she shared her expertise and affection for toys with more than 2 million visitors. Now it was time to share her favorites one last time with collectors who would treasure them as much as she had.

Ladenburger Spielzeugauktionen, with whom Engels had worked closely to build her collection, is marking a milestone of its own in 2014 – 25 years in business. Although auction houses in the U.S. and Asia were interested in auctioning Engel’s collection, she chose to return to her trusted friend Ladenburger to hold the sale.

More than 1,300 lots were auctioned to an appreciative audience, among them a rare School by the German toy maker Steiff. Its charming school desks, lesson books and round-faced student dolls went from an opening bid of 2,800 euros to an end price of 15,500 euros.

Lot 1144 was a breathtaking dollhouse decorated as a Vienna Café in the Biedermeier style with gothic details. The  café came complete with pastry-filled glass cases and guest dolls in their original 1880 finery. It was quickly bid from 3,800 to 16,500 euros.

Great interest was shown in a Humpty Dumpty Circus made by the German emigrant toymaker Schoenhut in the USA. The colorful tent and jointed figures, including a strong man, elephants and clowns, brought 8,000 euros.

Ladenburger owner and auctioneer Götz Seidel was pleased to mark the company’s 25th anniversary by being able to serve Engels one last time. www.SpielzeugAuction.de

Auktionshaus Kaupp, Sulzburg, rings in their 20th year in business with a two-part anniversary sale June 27 and 28 at Schloss Sulzburg. Founded in 1994 in Staufen, Kaupp has built something of a reputation for auctioning paintings by Carl Spitzweg. But more recently their art and antiques sales have featured outstanding contemporary art.

“Kaupp Modern” on June 27 continues this with works such as Lyonel Feininger’s sketchy watercolor Standansicht mit Kirche; a spontaneous pastel and ink piece by Hans Hartung; and the super-8 film and tape Der Tisch, shot by Dietmar Kirves, capturing a work by Joseph Beuys and his students in Dusseldorf, 1968.

The estate of Barons Ruprecht Böcklin zu Böcklinsau, the last owner of Schloss Balthasar in Rust, is an absolute high point in ”Kaupp Premium” on June 28. Countless pieces of furniture and collector’s objects from the Baroque and early Baroque periods will be brought to the market. They join an already rich selection of handicrafts, antiques including Jugendstil and Art Deco, and paintings from the 16th to 19th centuries.

Kaupp’s two-day anniversary sale will also include a selection of jewelry and watches, as well as Asian, African and foreign art. www.kaupp.de

In celebration of their 125 years of family history as auctioneers, Münzenhandlung Gerhard Hirsch Nachfolger has moved into spacious new quarters in the Pranner-Plenum, the site of the former Bavarian State Parliament in Munich. The auction company, which specializes in coins, medals and antiquities, also buys and sells bullion.

In 1888 the great granduncle of Dr. Francisca Bernheimer, Otto Helbing, held his first auction. But his company was forced by pre-World War II politics to close its doors. Family member Gerhard Hirsch opened a business trading in antique and rare coins in his own name in 1953. Dr. Franscia Bernheimer, a niece of Gerhard Hirsch, took over the business after her uncle’s death in 1982. The company holds four auctions a year, in February, May, September and November. For details visit www.CoinHirsch.de 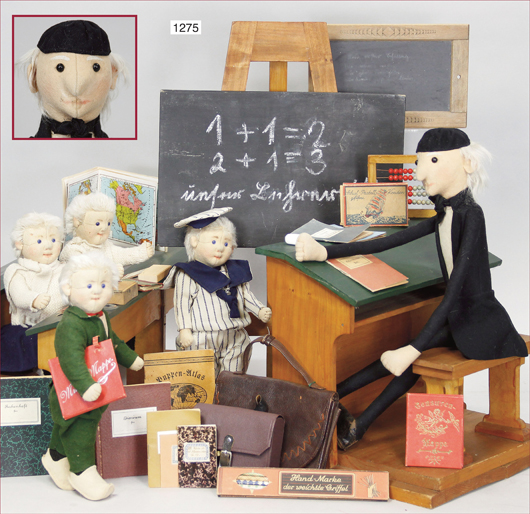 The rare School set by Steiff with its delightful tiny details like a functional abacus and a chalkboard. Photo courtesy Ladenburger Spielzeugauktionen. 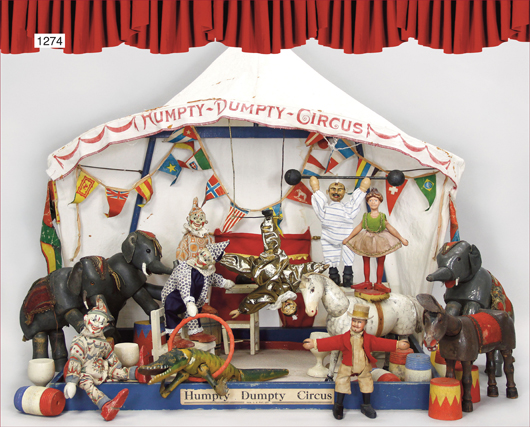 Everyone loves a circus. This one, by toymaker Schoenhut, finished at 8,000 euros. Photo courtesy Ladenburger Spielzeugauktionen. 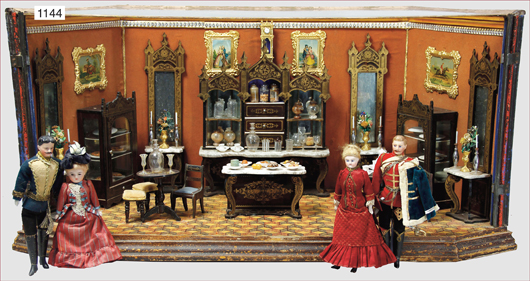 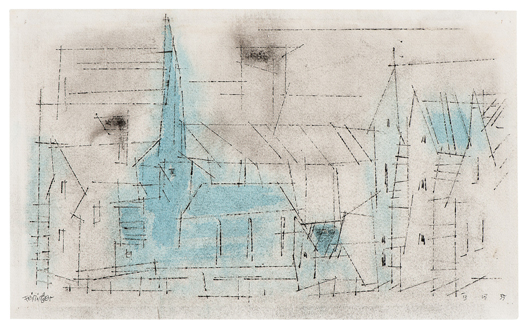 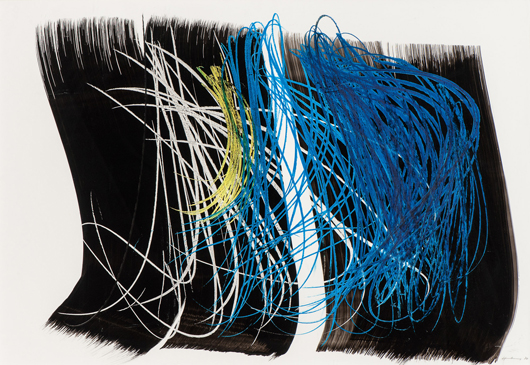 Spontaneous and brushy, with vivid color, is this typical pastel and ink work by Hans Hartung. Photo courtesy Auktionshaus Kaupp. 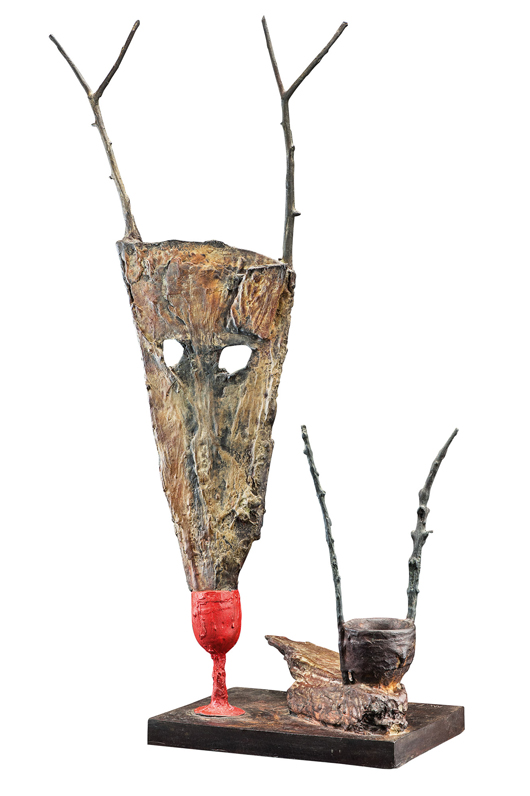 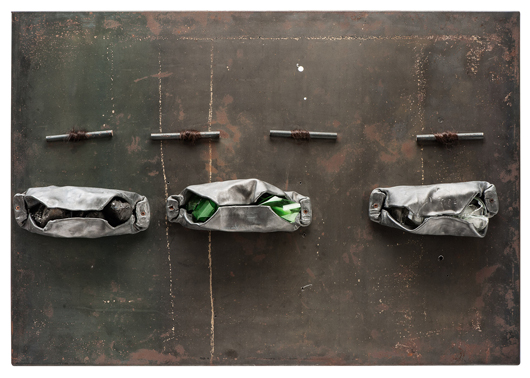 Greek artist Jannis Kounellis, one of the founders of the Arte Povera movement, is known for working with natural and industrial materials. The 1989 Assemblage is created of steel, glass, coal, and human hair. Photo courtesy Auktionshaus Kaupp. 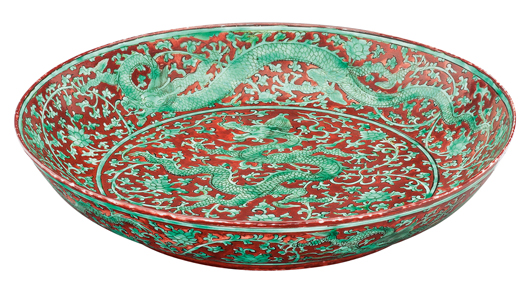 This iron red and green Dragon Plate is a highlight of Auktionshaus Kaupp’s Asian portion of the sale. The plate from the Zhenghde Period depicts a five-clawed dragon, meaning it was reserved for use only by the Emperor and his highest-ranking officers. Photo courtesy Auktionshaus Kaupp.