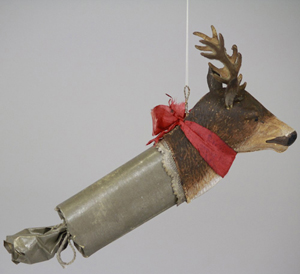 Legend has it that the German pastor Martin Luther was so moved by the sight of stars sparking through a pine tree against a dark winter sky, that he created the first Christmas tree. Whether this is true or not, there is a constant theme that a Christmas tree must sparkle like precious metal and jewels. One of the loveliest imposters must surely be the Dresden Christmas ornament.

“People are always so surprised when I show them the tree with the Dresdens and then tell them they are made of paper,” said Bill Steely, collector and publicity chairman for The Golden Glow of Christmas Past, an international collectors club based in Bridgeton, New Jersey.

The small (2-3 inch) ornaments are an elaborate hand-made ruse of embossed paper, gilded or silvered and sometimes painted, with lacy edgings and textural designs so deceiving they look like repoussé metal. But they are actually hollow, fragile ornaments made of many pieces of embossed paper cut and fitted precisely together, then painted with detailed care. The nimble fingers that made these lovely creations belonged to women and children or whole families who lived in or near Dresden, Germany, from 1880 to 1914.

At the time, eastern Germany was a hotbed of ornament production. F.W. Woolworth made his early fortune by visiting Lauscha in Thuringia to bring back colored glass ornaments that subsequently sold out at his US stores. Ornaments of painted, pressed cotton were also made there. In the Erzgebirge (Ore Mountains) miners and their families spent the winter carving nutcrackers and other decorations. Families in nearby Sebnitz assembled charming ornaments using scraps of fabric and wire.

“It was the Industrial Revolution. The Germans had developed glass-blowing techniques, like using a gas flame that burned hotter and made finer glass. Their chromolithography printing techniques were highly advanced, using up to 28 different plates. And they developed special die presses for making the paper parts of the Dresdens,” noted Steely.

A damp sheet of heavy paper was loaded into the concave part of the press, with the convex pattern die pressed down on top of it. Soon, out popped the rounded side of a horse, or half the side of a dirigible, or half a French horn on its way to being a three-dimensional Dresden ornament. Some Dresdens, called “flats” were two-dimensional and embossed only on one side. Some of the flats were embossed on two sides, with the two embossed halves glued together.

The die embossing press had the advantage of making many, many identical parts at once. Families then came to the 9 or 10 factories in Dresden and Leipzig to collect the parts for home assembly.

“Each family made a small amount (of Dresdens), yet they were produced in large quantities,” noted Steely. “They were paid very little and had to work quickly.”

Even so, the factories got back ornaments of a superb quality. At the time, the Dresdens were the most expensive among the German ornaments. Not everyone could afford them, and many were exported to other countries, including Great Britain and the United States.

Motifs for the Dresden ornaments seem endless. They include insects and animals of the land, sea and sky, both wild and domestic; enough musical instruments to form an orchestra; popular modes of early 20th century transportation including carriages, sleighs and bicycles, steam ships, trains and the new-fangled automobile; figures such as angels and horseback riders; and whimsical objects like clocks, pipes, opera glasses, boots and Champagne bottles.

“They were not just used as Christmas tree ornaments,” said Steely. “They were used on invitations and as place cards with a person’s name on them. Some opened and had a little paper candy bag inside for candy or a small gift. And some were made as crackers, but very few of these exist.”

With the start of World War I in 1914, the production of Dresdens was interrupted. Although they were made again after the war, the level of quality was never the same. If there is one Dresden ornament that seems to signal the end of their era, it is the Dresden shaped like a rather drab World War I tank.

“Collectors value the earlier Dresdens for their artistry,” noted Steely.

As a collector, Steely says his favorite Dresdens are a painted ram’s head with a candy bag, and a chameleon painted in iridescent colors. Although he collects other types of Christmas decorations, he especially enjoys hanging the Dresdens on a Christmas tree each year. When not shining from his tree, his Dresdens are packed carefully away in tissue paper and boxes.

As well they should be. The fragile paper ornaments have survived many Christmases. The overall supply of Dresdens has been depleted with use and time. But demand for them is increasing. Stumbling upon one for a bargain price at a flea market doesn’t happen anymore.

“I haven’t been so lucky,” noted Steely. “There’s a big demand for Dresdens in the American market.”

He cited Bertoia Auctions and Morphy Auctions – both auction-house partners with LiveAuctioneers.com – as good sources for collectors. He also searches for Dresdens in specialty antique shops and at the annual Golden Glow convention. Collectors can start out at $25 (€19) for a simple flat, advancing to hundreds of dollars for a three-dimensional ornament. Very rare examples can sell for over $10,000 (€7,700).

“At the convention collectors buy, trade and sell,” said Steely. “Because we have collectors of many different kinds of Christmas decorations, during this four-day time period we say it is the largest collection of Christmas anywhere in the world.”

For more information on Dresdens and other types of German Christmas ornaments, visit www.GoldenGlow.org 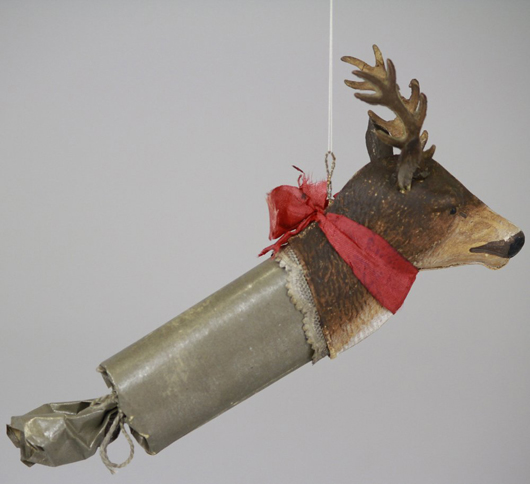 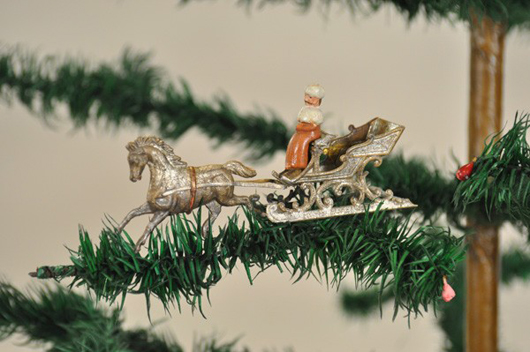 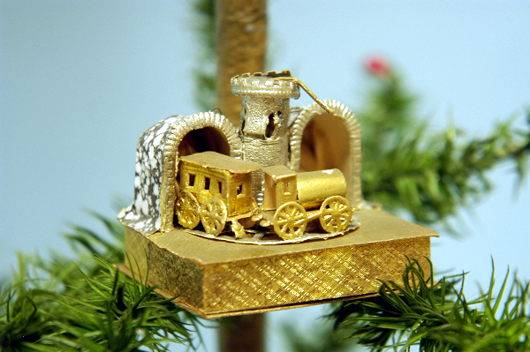 A top price for Dresden ornaments was reached with this unusual train circling mountain ornament, where the train actually appears to enter a tunnel. It went for $10,000 (on the hammer) at Bertoia’s November 2005 auction. Photo courtesy Bertoia Auctions. 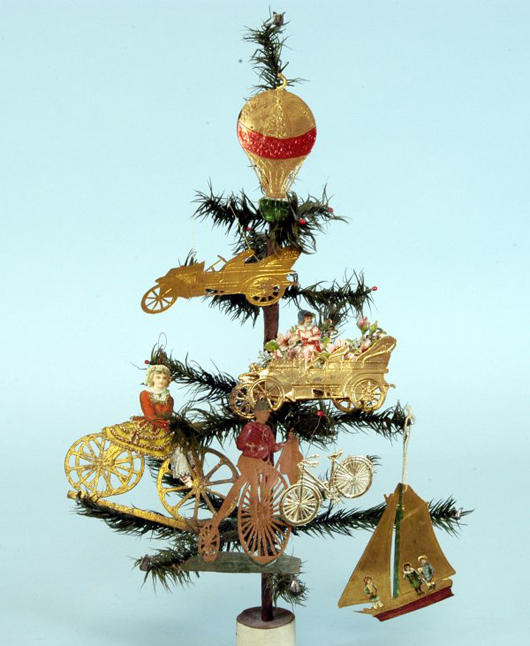 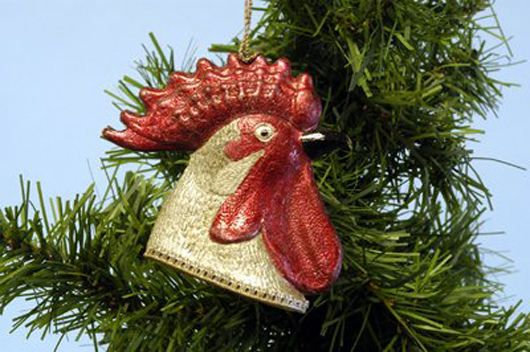 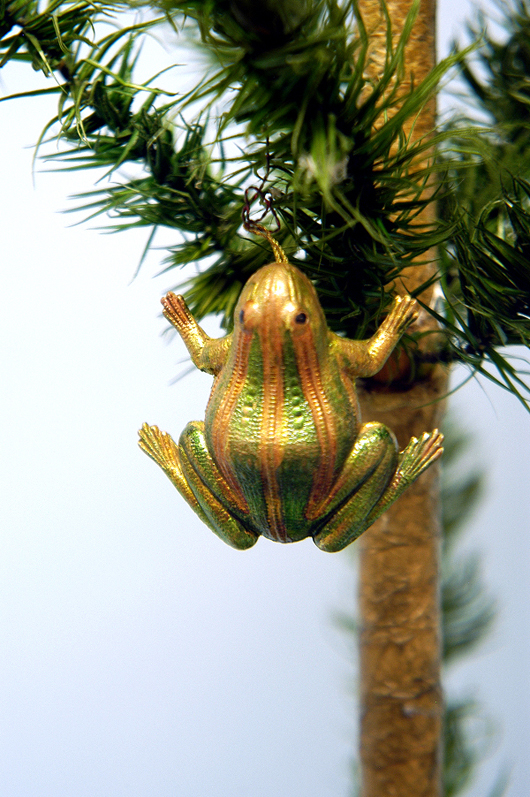 Gold and metallic paints make this Dresden frog shine with iridescence. It fetched $900 (on the hammer) at the November 2005 Bertoia Auctions sale. Photo courtesy Bertoia Auctions. 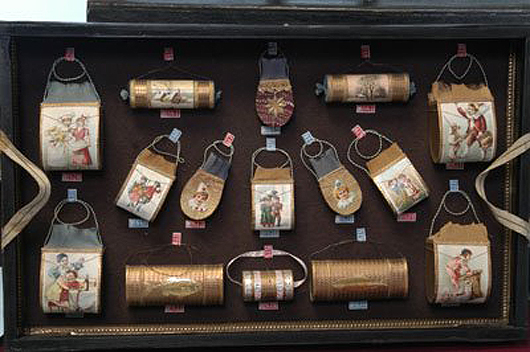 A rarity at Bertoia’s November 2008, auction: a salesman’s sample case with three full trays of Dresdens. It realized $7,000 (on the hammer). Photo courtesy Bertoia Auctions. 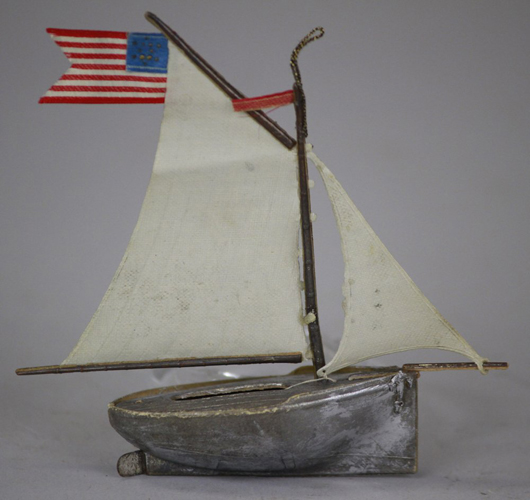 A German ornament made for the American market: this silver Dresden sailboat flying the US flag brought $1,600 (on the hammer) in Bertoia Auctions’ September 2012 sale. Photo courtesy Bertoia Auctions. 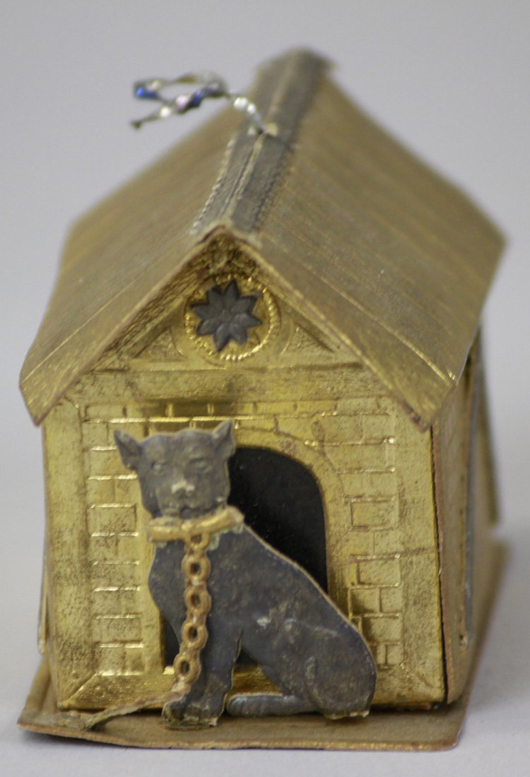 A fine example of an early German Dresden ornament, depicts a chained dog sitting in front of a gilt cardboard doghouse. Doubling as a candy container, its roof lifts off to allow access to candy. Collection of Catherine Saunders-Watson. 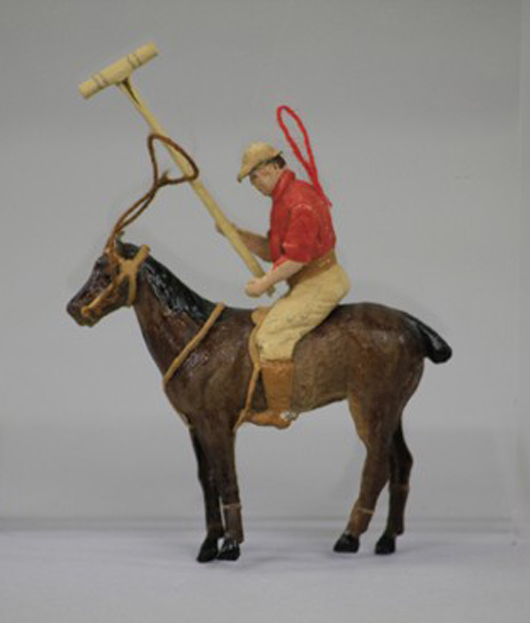