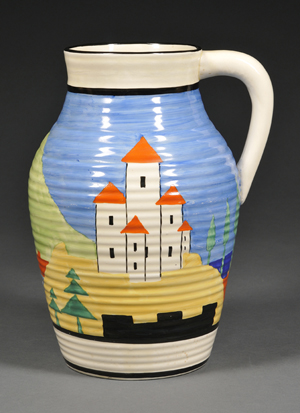 A single-owner collection of Clarice Cliff pottery, sold at Skinner’s on June 25, included many of the most desirable forms and patterns. This Bizarre Ware Lucerne single-handled jug in the Lotus shape sold for $7,110, far above the modest $500-600 estimate. A recent reference included this design in a list of Cliff’s “Top Twenty Patterns.” Courtesy Skinner Inc.

BOSTON – Perfect for summer, colorful art pottery designed by Clarice Cliff (1899-1972) is covered with blooming flowers and ripening fruit. Although the English artist of the Art Deco period also created spare geometric motifs, the majority of her patterns feature glimpses of the natural world.

Produced in the late 1920s and 1930s, Cliff’s patterns sound like marvelous bouquet:; Tulip, Anemone, Crocus, Hydrangea, and Nasturtium are only a few of the many available in the antiques market. Likewise, the fanciful fruit basket is filled with designs like Melon, Oranges, Passionfruit, and Berries.

At other times, Cliff created charming landscapes filled with stylized trees and houses. Orange Roof Cottage recalls a scene from the English countryside, while patterns like Honolulu or Applique Lucerne draw inspiration from more exotic locales.

Gibraltar, introduced in 1931, is a seascape with sailboat, painted in soft colors. Clarice Cliff created so many varied designs in such a short time that there is always a rare pattern or form to delight the serious collector.

On June 25, 2011, Skinner Inc. in Boston offered an extraordinary one-owner collection of Clarice Cliff pottery in their sale of 20th Century Furniture and Decorative Arts.

The event attracted bids from around the world, and the total realized for the group tripled the modest estimates.

Jugs in the rounded “Lotus” shape proved especially popular; one in the Gardenia pattern sold for $1,422, another in the Autumn pattern filled with balloon-like trees for $3851, and a third in the rare Lucerne design for $7,110.

After the sale, Skinner department head Jane Prentiss explained why Cliff’s output remains in such strong demand among collectors: “It’s very cheerful. It’s the pure sense of decorative. People who contacted me were interested because this collection was fresh to the market, so it wasn’t the same pieces of Clarice Cliff going through various auctions.”

She continued, “I think it’s interesting that the countries that were most interested in it were Australia, South Africa, New Zealand and England. Some collectors get jaded, but these people were truly enthusiastic about the material. They were explaining to me that some of the forms hadn’t come out in a while.”

Prentiss admits to having personal favorites. “I live in the woods, and I liked the Pine Groves tea service,” Prentiss said. “The lady who bought it was so excited. The bidders’ enthusiasm was just contagious.”

The 12 pieces in this lot were sold for $1,659 (est. $500-600). The offering included one of the sought-after conical sugar shakers found in many Cliff patterns, as well as teapot, sugar, creamer, and cups and saucers.

Prentiss also pointed out the soft browns and greens and rich reds of the Cabbage Flower pattern, adding “I tend to go for the more organic colors.” Five demitasse cups and saucers in the pattern brought $948; a bowl and octagonal plate were sold for $356.

A similar color scheme appears in Cliff’s Newlyn pattern, which depicts a dreamlike landscape with a red-roofed cottage at center. A group of thirteen pieces with this design sold for $7,110.

Serious collectors know that Clarice Cliff pottery is a complex subject. There were major design collections such as her Bizarre and Fantasque lines, a wealth of different patterns, and a variety of shapes with their own factory names to which the designs were applied.

For example, the Autumn pattern mentioned above belongs to the Fantasque collection and was applied to a two-handled jug or pitcher in the Lotus shape. While the rounded Lotus is a more traditional shape, Cliff also invented table services in angular new forms – circles, triangles, and cones. Buyers compete for the unusual rectangular plates and triangular tea cups.

Fortunately, collectors can consult a number of illustrated references to learn more about Cliff’s career and her wares. Serious academic interest grew when the Brighton Museum and Art Gallery in England organized an exhibition of her work in 1972.

Some details of the designer’s biography are worth noting. In spite of the sophistication of her designs, Cliff was not a well-educated artistic dilettante, but rather a talent who emerged from working-class origins. She was born in the Staffordshire pottery district at Tunstall, Stoke-on-Trent, in 1899. The potteries commonly employed women decorators, whom they paid very low wages, to turn out hand-painted or transfer-printed sets of dishes.

Clarice knew the business at an early age because her sister Sarah was in charge of the decorating shop at Johnson Brothers. Clarice’s formal education ended at 13, when she secured a post at Lingard & Webster, which paid only two shillings a week. As she continued to work at various potteries, she received additional artistic training and eventually her skills as a painter and designer were recognized by management.

In 1927 when the Art Deco style began to receive public attention, Cliff came up with a new decorating range she called “Bizarre.” In his recent book, Andrew Casey writes, “At a time when most people were buying period and traditionally styled pottery decorated with rubber stamped motifs, Bizarre burst on to an unsuspecting market in a riot of colour that made a significant impact on the British pottery industry.” The complete history of the designer’s extraordinary career is well worth studying.

In his introduction to Casey’s reference Eric Knowles offers this explanation for the appeal of Clarice Cliff’s pottery: “Her creations are for the most part cheerful, with the ability to raise a smile, and any art form that can play on our emotions in such a positive manner has to be worthy of the international acclaim she continues to enjoy.” 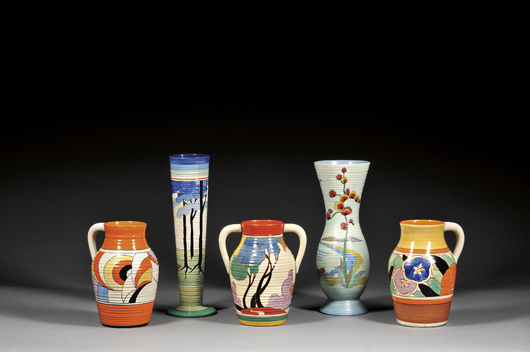 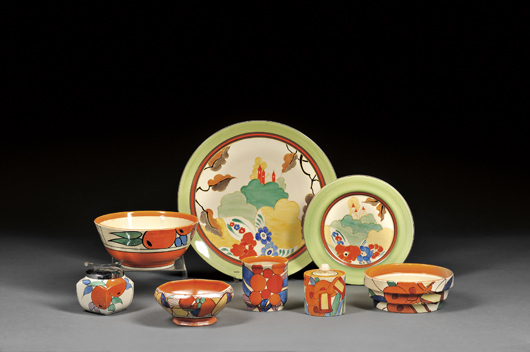 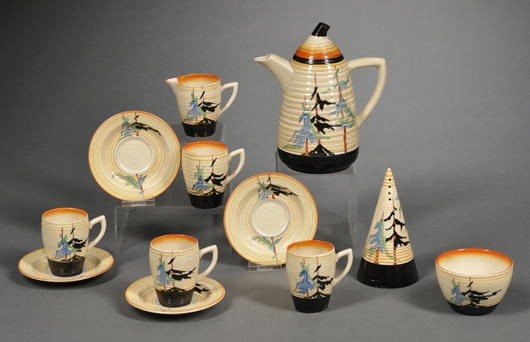 This group of tea wares in the Bizarre Ware Pine Groves pattern, sold for $1,659, would be perfect for a mountain retreat. Courtesy Skinner Inc. 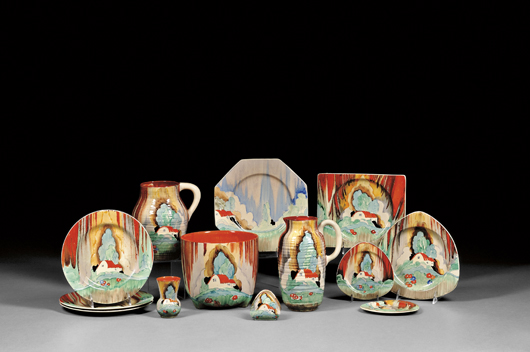 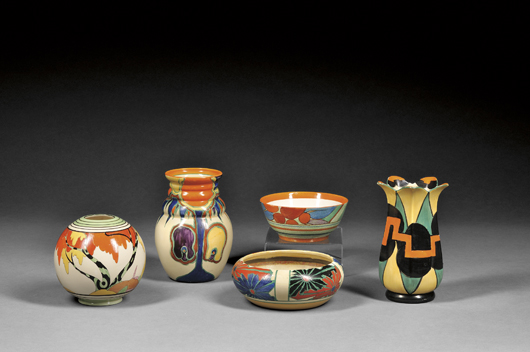 Sold as a group for $3,851, the five pieces with bold geometric patterns included a round Honolulu vase at left. Courtesy Skinner Inc.