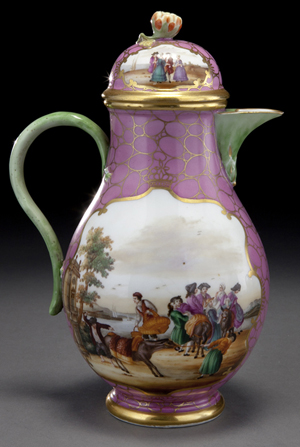 In September, the Dallas Auction Gallery sold a 31-piece Meissen coffee and tea service from the 19th century for $10,625 with buyer’s premium. This detail of the coffeepot reveals the exquisitely painted topographical scenes for which the firm was celebrated. Courtesy Dallas Auction Gallery.

“Meissen was Europe’s first factory to make ‘true’ or ‘hard paste’ porcelain in the manner of the Chinese. It is also widely acknowledged as the greatest of all European porcelain factories,” writes John Sandon in the introduction to Meissen Porcelain, published in 2010 on the tercentenary of the establishment of the renowned German factory.

Today brainpower may focus on inventing new software or digital devices, but 300 years ago unlocking the formula for porcelain production was the Holy Grail. At that time, China had the know-how, and King Augustus II the Strong was buying up porcelain from the Orient, while longing to learn the secret of its manufacture.

Approaching the holidays, the host or hostess in charge may open the china cabinet, pondering what dishes will look the best and inspire a festive spirit. The king may have enjoyed a far more extravagant lifestyle at his palace in Dresden, the capital of Saxony, but his motivation was the same. He wanted to set the royal table to impress his guests.

Sandon continues the tale: “The world’s finest porcelain was discovered by an alchemist imprisoned in the king of Saxony’s castle. Working in a dungeon jail, Johann Friedrich Bottger found the ‘arcanum’, the secret process that made pure white porcelain. This precious commodity was known as ‘white gold’, for in 1710 porcelain was worth more than its weight in gold. Three centuries later, Meissen is still precious.”

Once the process of producing dining services and figures from the white porcelain was perfected, the factory focused creating new decorative techniques. Sandon’s comprehensive volume breaks down the history of decoration into chronological periods. Several strong personalities stand out, notably Johann Gregor Horoldt, who was famous for his fantastic chinoiserie landscapes around 1713-1740.

The most famous artist to work at Meissen was probably Johann Joachim Kandler (1706-1775). The skilled modeler and his workshop of craftsmen produced prototypes for Meissen’s famous figurines – often used as table centerpieces – as well as sculptural dining and serving wares. Among his creations was a series of characters from the Italian commedia dell’arte in their colorful costumes and amusing figures of formally dressed monkeys playing musical instruments.

Collecting Meissen and porcelain from other German factories should involved serious study and advice from experts in the field, because numerous pitfalls exist. Right from its 18th century beginnings, everybody else wanted to “be Meissen.” Industrial espionage was common, and styles and marks were imitated by other wannabe makers. The familiar blue crossed swords mark was added, appropriated and faked on lesser porcelain throughout Europe.

From the beginning, pieces made at Meissen – sometimes “seconds” – were purchased in the white and decorated elsewhere. And Meissen continued to replicate its own popular painting styles and figurine types from the 18th century throughout the 19th and into the 20th. These later-made pieces have become collectible in their own right.

John Sandon gives this collecting advice: “The finest specimens from the 18th century are deservedly expensive, but not every piece costs a king’s ransom. Choice pieces of 19th- and 20th-century Meissen present today’s collectors with an enormous opportunity.”

A good buying opportunity arose earlier this year when an important collection came on the auction market. Caroline Shuford, consignment director at the Dallas Auction Gallery, commented: “The Meissen in our Sept. 27th sale came from private collections in Texas, Oklahoma and from the estate of Mimi and Herman W. Lay, founder of H.W. Lay & Co. (makers of Lay’s potato chips) and former CEO of Frito Lay and Pepsico. Group lots of Meissen figures gained the most interest from buyers, as did figural cabinet plates and an exceptional topographical coffee service. The majority sold within or exceeded our presale estimates confirming that with the right pieces and conservative estimating, the Meissen market can bring strong prices.”

The coffee and tea service is an excellent example of how Meissen continued to turn out wonderful porcelain in the 19th century, which replicated the topographical painting style and colored grounds that originated in the first half of the 18th century. The 31-piece service included coffee and teapots, sugar and cream vessels, 12 cups and saucers, two small trays and a bowl. They are marked with crossed swords in underglaze blue as well impressed and painted numerals.

Whether gathering a few decorative pieces or planning more serious acquisition, potential buyers can start by visiting one of the excellent collections on view in American museums. “White Gold: Highlights from Arnhold Collection of Meissen Porcelain” – on view through Jan. 6 at the Frick Collection in New York City – displays approximately 70 pieces from Henry Arnhold’s promised gift to the museum. The Arnhold Collection of Meissen Porcelain, 1710-50 by Maureen Cassidy-Geiger, Sebastian Kuhn and Heike Biedermann is available from the bookstore.

On view at the Cummer Museum of Art and Gardens in Jacksonville, Fla., is the Wark Collection of Early Meissen Porcelain. Research on the collection appears in a 600-page catalog authored by Ulrich Pietsch, director of the state collection of Meissen porcelain in Dresden, Germany.

Warda Stevens Stout left her Meissen collection to the Dixon Gallery and Gardens, a special house museum in Memphis, Tenn. Visitors can see the best pieces in the current exhibition “Fire and Desire: A Passion of Porcelain in the 18th Century” through Jan. 20. A catalog of the collection by Christina H. Nelson and Letitia Roberts will be available in March. 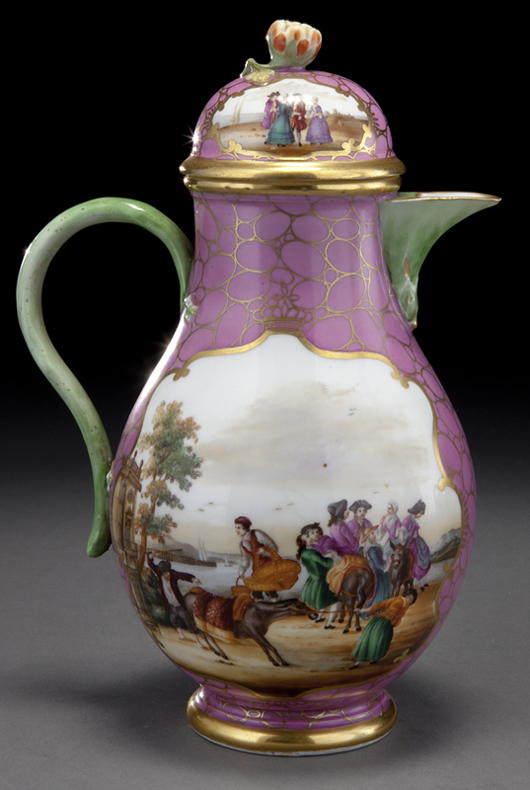 In September, the Dallas Auction Gallery sold a 31-piece Meissen coffee and tea service from the 19th century for $10,625 with buyer’s premium. This detail of the coffeepot reveals the exquisitely painted topographical scenes for which the firm was celebrated. Courtesy Dallas Auction Gallery. 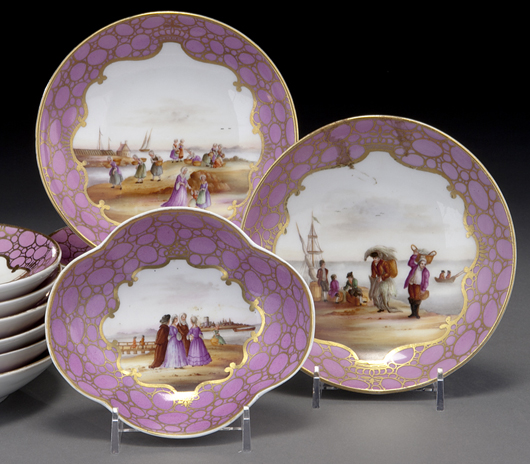 Each piece in the elaborate service was painted with a unique view of figures on the shoreline. The lot was part of a consignment of Meissen from the family of Mimi and Herman W. Lay, founder of H.W. Lay & Co. and former CEO of Frito Lay and Pepsico. Courtesy Dallas Auction Gallery. 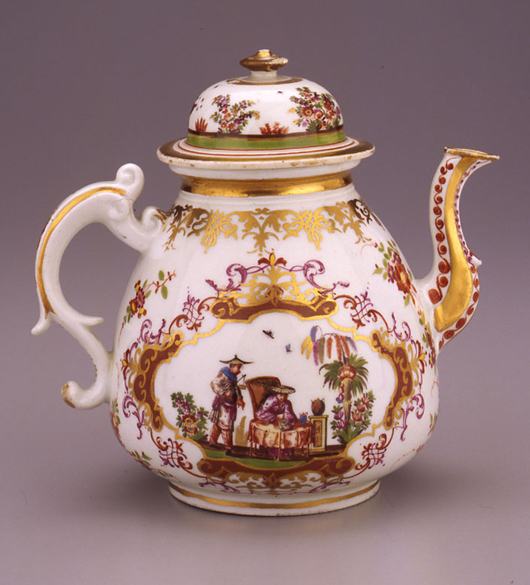 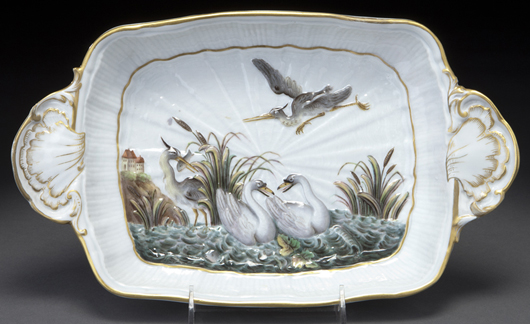 This elegant swan platter, 19th century after an 18th century model by J.J. Kandler, brought $1,125 at auction in Dallas this fall. The original Swan Service – over 2,000 pieces commissioned by Count Bruhl – was the most famous ever made at Meissen. Courtesy Dallas Auction Gallery. 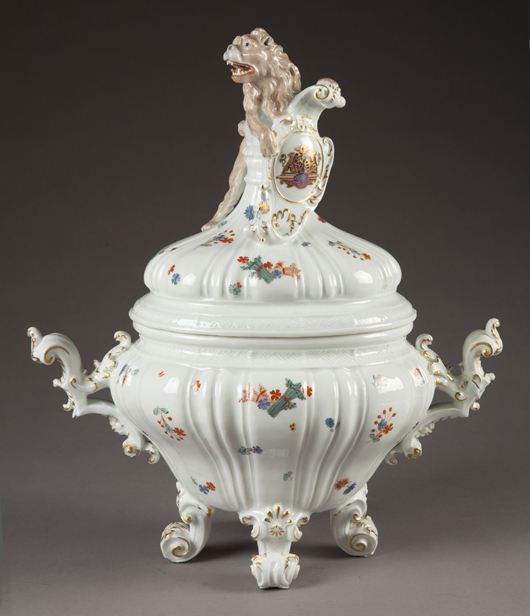 Another elaborate Meissen service, made for Saxon Prime Minister Count Sulkowski, circa 1735, included this tureen and cover now in the Stout Collection in Memphis. View highlights in the current Dixon Gallery exhibition ‘Fire and Desire: A Passion for Porcelain in the 18th Century.’ Courtesy Dixon Gallery and Gardens. 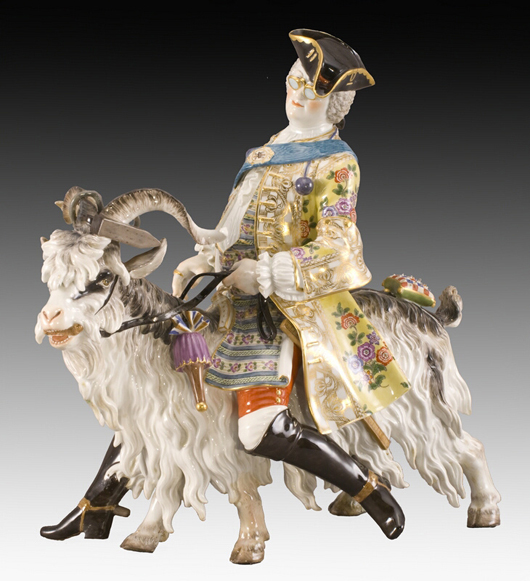 This satirical figure of Count Bruhl’s tailor astride a shaggy goat, late 19th century after the 18th century model by J.J. Kandler, sold for $14,340 in 2009. The original statuette appeared on the king’s table as part of a complex centerpiece. Courtesy Dallas Auction Gallery. 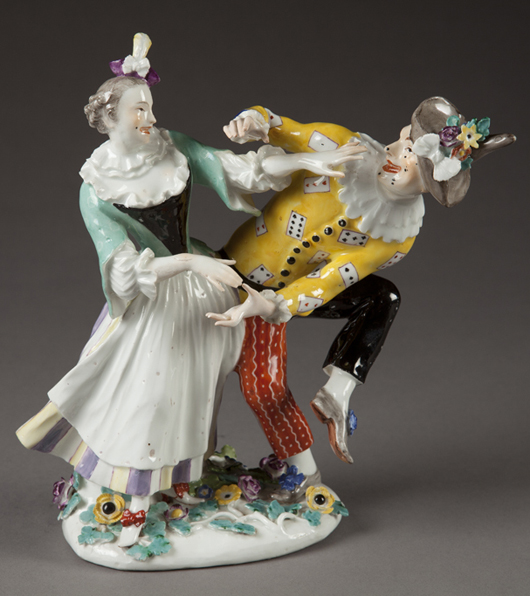 Meissen master Johann Joachim Kandler began modeling figures from the Italian commedia dell’arte in 1735. This circa 1744 group from the Stout Collection depicts a dancing harlequin and columbine. Courtesy Dixon Gallery and Gardens.