This trio of transfer-printed plates, auctioned for $300 in February 2008, features a view of the “Park Theater New York” with oak leaf and acorn border, by Ralph Stevenson & Williams. Courtesy Skinner Inc.

Throughout human history, commercial considerations can quickly trump political differences. Economic prosperity seems far more important in the long run than clinging to old enmities. In the 20th century, Americans were purchasing excellent cars from Germany and Japan only a few decades after the battles of World War II.

In the 18th century prior to the Revolutionary War, colonists had imported English stoneware and creamware because it was well made and fashionable. The expertise of the British potteries in mass production made their products a good value even when the long sea journey was factored in.

In the early 19th century, it is no surprise that newly independent Americans once again clamored for British china. Marketing entrepreneurs at pottery firms in the Staffordshire district and elsewhere actively designed patterns that would appeal to American patriotic fervor.

White pottery decorated with transfer-printed scenes, first in black, then in strong cobalt blue, is perennially popular with collectors. Views depicted include American cities and landscapes, naval battles, portraits of the Founding Fathers, and coats of arms from the new states.

Collectors began treasuring such English pottery with American views in the same century as when it was made, even before it had achieved “antique” status. The Centennial of 1876 spurred on the new hobby of collecting Americana. People sought out things connected with the early years of the United States, from American-made furniture and silver to these ceramics with patriotic themes.

One of the earliest guides to collecting was the 1899 reference Pictures of Early New York on Dark Blue Staffordshire Pottery by R.T. Haines Halsey (1865-1942), an early pioneer in the field of Americana. He points out that immediately after the War of Independence, English potteries with an eye on export sales were turning out creamware (sometimes called queensware) commemorative jugs – made in Liverpool and elsewhere – that celebrated their own defeat.

An entertaining writer, Halsey notes, “Following the early custom of using pottery as a means of perpetuating historical events and famous personages, a few years after the Revolution the English potters sent to this country articles of queensware which, on account of the decorations, proved exceedingly attractive to their rebellious cousins.”

One such commemorative pitcher or jug, made around 1800, turned up in the excavation of a well on King Street in the historic city of Alexandria, Virginia. Obviously inspired by George Washington’s death in 1799, the British-made piece features a black transfer-printed bust of the general and the tribute “A Man without Example, A Patriot without Reproach.” The war was old history, and merchants in the mother country heard nothing but the sound of cash in the till.

The War of 1812 between Britain and the United States disrupted this commerce. The conflict, which resulted in the burning of Washington, was in part over trade disagreements. Once ended, however, the result was much the same: Americans demanded dishes for the table and England supplied them. Products included the dark blue transferware mentioned above and other types of popular pottery.

Getting down to his main discussion of blue-decorated pottery, Halsey wrote, “With that keen insight which has given to the English manufacturer the markets of the world, several of the Staffordshire potters, instead of attempting to educate the people to stifle their prejudices, sent to this country for views of well-known buildings, and scenes which were regarded with pride. These were applied to earthenware by the transfer process then in common use. The blue colorings were chosen, as they had previously proved attractive to American housewives, and were also the richest form of cheap decoration in use at the time.”

Decorating pottery with transfers began with an engraved copper plate, similar to those used for prints and book illustrations. The plate was inked and the inked design was transferred to the bisque china using a sheet of flexible paper. Many sheets could be pulled from a single copper plate, allowing for mass production from the master design.

A high degree of skill was required from the workers – often women – who quickly applied the inked paper to the dinner services. They only had one chance to position the dark blue design in the right spot. The pattern was fixed with a low-temperature firing, then the pieces were glazed and fired again.

An excellent example of a public event “regarded with pride” that could be turned into a popular pattern was the return of General Lafayette to American in 1824 at the invitation of President Monroe. Lafayette was a French military officer who had fought with George Washington and was regarded as a hero of the American Revolution.

Blue transfer-printed patterns based on the event included a depiction of the “Landing of Gen. Lafayette” at Castle Garden, N.Y., by the Staffordshire firm of James and Ralph Clews, active 1815-1834. Enoch Wood & Sons (1818-1846) created “Lafayette at Franklin’s Tomb” and “Lafayette at Washington’s Tomb.” showing the French patriot in reflection at the graves of the elder statesmen.

Turning to other themes, Enoch Wood also produced a series of nautical views surrounded by an appropriate shell border, several of which pertain to American history. “Commodore Macdonnough’s Victory” and “Constitution and The Guerriere” are two highly collectible patterns made at English factories, depicting British naval defeats during the War of 1812.

John & William Ridgway (1814-1830) did a “Beauties of America” series with many well-known views, such as the State House in Boston, City Hall in New York, and Mount Vernon near Washington. Like most transfer-printed patterns, each has a cartouche on the reverse with the maker, series name, and title of the view.

John Rogers and Son (1815-1842) also created a Boston State House pattern which appears on plates, platters, and even a wash basin and jug. The view shows the city in simpler days when cows grazed on the common nearby. A 14-inch platter with this view was auctioned in February at Skinner Inc. in Massachusetts for $1,500. As would be expected, collectors often focus on ceramics depicting scenes from their own local area.

Karen Langberg in the American Decorative Arts department at Skinner says, “Regional views like the Boston State House, View of Trenton Falls, Lake George State of New York, The Dam and Waterworks, Philadelphia, would be of interest for those area collectors. A series of views such as Enoch Wood & Sons’ Erie Canal series, or Picturesque Views by Clews might a way to start a collection.”

“We seem to get a consignment of a few items in each auction from different consignors,” Langberg continued. “A plate (the most common item) with an American historical scene in good condition sells for about $200-$300, less if not in good condition. The more unusual forms like a child’s mug, tureens, coffeepots, etc. bring higher amounts.”

The scenes on these examples of blue-printed pottery, based on period drawings of the locations, are like snapshots of history. Now bustling cities seem almost bucolic, free of traffic and pollution. Especially important are views of early transportation – an Enoch Wood pattern showing the Baltimore & Ohio Railroad and the series by the same firm with images of the Erie Canal cited above.

In addition to the usual floral border, each view in the Clews brothers’ “America and Independence” series is also surrounded by the names of fifteen states with a bust of Washington and a personification of Lady Liberty. Ralph Stevenson (1810-1835) and his brother Andrew not only used American scenes like the Park Theatre in New York, but also added large portrait medallions of Jefferson, Washington, Lafayette, and New York Governor DeWitt Clinton.

Thomas Mayer (1826-1838) took a different approach to attracting American customers with a series based on the “Arms of the States” produced around 1830. The well-executed Seals include Connecticut, Rhode Island, Delaware, Pennsylvania, Virginia, and exotic South Carolina, which features a palm tree at the center.

The classic reference on the subject is Ellouise Baker Larsen’s American Historical Views on Staffordshire China, long out of print but available in libraries and through online booksellers.

A more recent Schiffer publication with color images of many patterns is Historical Staffordshire: American Patriots & Views (1995) by Jeffrey B. Snyder.

A well-written reference on the production of transferware in England is The Dictionary of Blue and White Printed Pottery 1780-1880 by A.W. Coysh and R.K. Henrywood, an Antique Collectors’ Club volume first published in 1982. The book gives brief profiles of the numerous factories and includes extensive bibliography.

The text makes clear the scale of production possible during the Industrial Revolution. Most astounding is the multitude of patterns manufactured during the period, many based on books of engravings. Potteries skilled in making dinner services with scenes of England, Scotland, and India, could easily produce tableware with American views once they located the proper source material.

Although a popular for over a century, American historical Staffordshire pottery is still available and affordable, thanks to the immense amount produced and the way it was cherished by its owners. 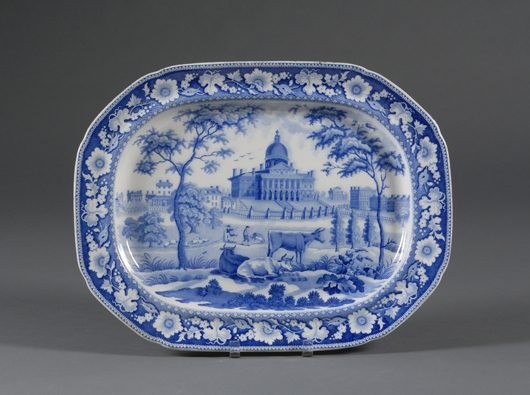 This 14-inch platter by Rogers & Son, early 19th century, depicts the Boston State House with cows grazing on the Common in front; the Staffordshire piece auctioned in February for $1,500. Courtesy Skinner Inc. 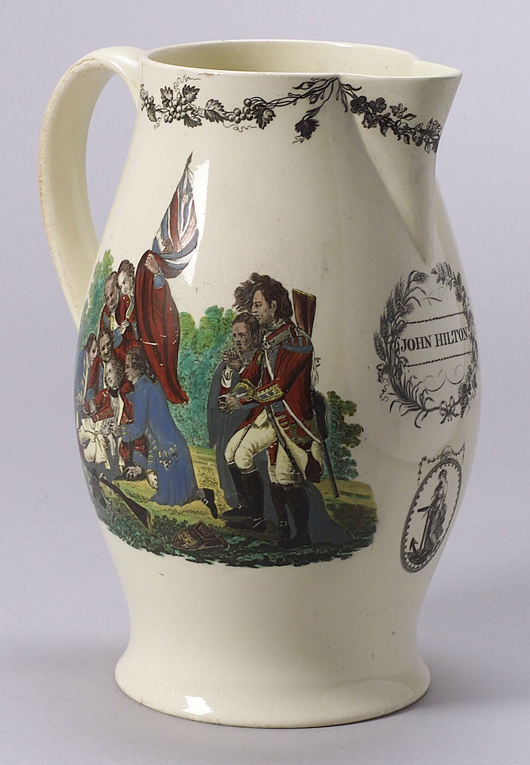 A transfer-printed Staffordshire jug, decorated with an American Eagle, Shield, and Banner inscribed ‘E PLURIBUS UNUM’ under the spout, brought $1,200 at auction in 2008. Courtesy Skinner Inc. 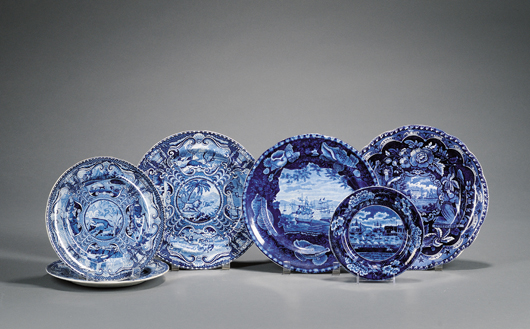 This group of nine blue and white English plates made in the early 19th century would look perfect on a corner cupboard or plate rack. The collection sold at a June auction for $800. Views include a “States” dinner plate by Clews and “Commodore MacDonnough’s Victory” by Enoch Wood & Sons. Courtesy Skinner Inc. 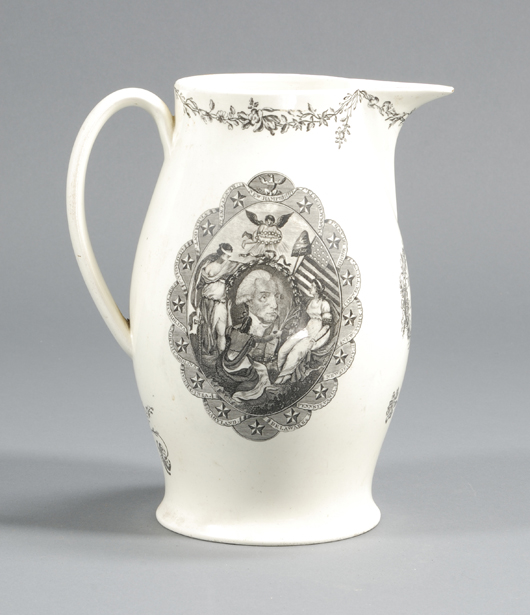 A Liverpool creamware jug, decorated with a black transfer image of George Washington and the figures of Liberty and Justice surrounded by a chain of 15 states, sold at auction earlier this year for $2,600. Courtesy Skinner, Inc. 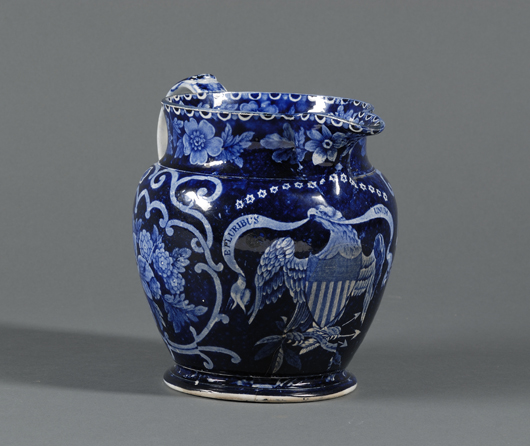 A Liverpool creamware jug from the early 19th century has a transfer-printed nautical view of The America on one side and the death of General James Wolfe on the reverse. The pottery work with polychrome enamel highlights sold in 2005 for $4,500. Courtesy Skinner Inc.