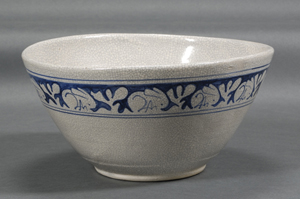 Competition can be keen for rarely seen forms, such as this large bowl (dia. 11½ inches) which sold for $1,422 at a June 2008 20th Century auction. Image courtesy Skinner Inc.

Spring has arrived, Easter decorations fill the shops, and art pottery collectors might find their noses twitching for seasonal dinnerware. The perfect accent on a holiday table could be Dedham Pottery’s rabbit-bordered dishes.  The pieces are colorful, attractive, and easy-to-find at auction.

Working in the potteries was a strong tradition in the Robertson family. After managing a firm in northern England, James Robertson brought his family to America in 1853 and settled in the Boston area. Led by son Alexander, the family first founded a pottery in Chelsea, which became known as the Chelsea Keramic Works and continued in various forms until 1896.

Under the management of another son, Hugh C. Robertson, the pottery then moved to Dedham, a small township southwest of Boston. Robertson had been strongly influenced by Asian ceramics glimpsed at the Philadelphia Centennial of 1876. His experiments with glazes took him in several artistic directions.

At his Dedham Pottery, Robertson rediscovered the formula for an intense red Chinese glaze sometimes called “Dragon’s Blood” through a process of trial and error. He used this hue alone and in combination with other vivid colors. His 1896-1899 line called “Volcanic Ware” used multiple firings to produce special glaze effects, and the best of these pieces are very collectible. These interesting experiments were not a financial success, however, and the lead in the glazes led to the potter’s death in 1908.

Fortunately, Hugh Robertson had also perfected a cream-colored crackle glaze, based on Asian prototypes. He used this for a line of dinnerware, which proved to be the pottery’s financial salvation and ensured its continuance – under a son and grandson – until 1943. The dishes were decorated with hand-painted blue borders featuring repeated motifs from the natural world, mostly commonly rabbits.

In a Miller’s Guide to American Art Pottery, ceramics expert David Rago wrote: “The crackle-glazed dinner plates and serving pieces, adorned mostly with cobalt blue bunnies on a cream ground, have preserved Robertson’s legacy. However, he probably would not find such a prospect appealing, considering his predilection for extreme glazing. But the financial success of the bunny ware enabled him to continue his kiln experiments for several decades, into the 20th century.”

While examples of Dedham Pottery turn up everywhere, Skinner Inc. in the Boston area is an important source for both the basic items and rare serving pieces needed to form an extended service. Jane Prentiss, head of 20th Century sales at the auction house, says, “We do get a lot of it. I love all of that pottery because it’s so whimsical and cheerful. I have a big collection of rabbits coming up in the June 25th sale.”

The rabbit border pattern was Dedham’s most popular, and the famous bunny profile was even incorporated in the pottery’s trademark. Prentiss emphasizes its heirloom status: “It was the most made and the most kept. When we go into homes, we often find it. When they had whole services, they tended to use the bunny border for the dinner set and the other borders for plates to display on the hutch.”

Although rabbits were most common, many other designs decorated Dedham’s crackle ware dishes. Collectors can find borders of elephants, ducks, and polar bears as well as irises, magnolias, and mushrooms. There are also hand-painted floral compositions that cover an entire plate. Values rise with rarity, and the search for unique examples can be fascinating.

Jane Prentiss often consults a reprint of an old Dedham Pottery catalogue – copies appear for sale online – which lists the wide range of forms offered for sale. She says, “You can assemble whole rabbit dinnerware sets with serving bowls, pitchers, and coffee pots. The original buyers tended to get the cups and saucers and dinner plates first. If they had a little bit of extra money, they would buy the serving pieces and those pieces tend to be more valuable and difficult to find.”

Skinner’s June 25th sale will offer many forms to help round out a dinner service including cups and saucers, a coffee pot, creamer and sugar bowl, and a handsome rectangular platter. Collectors should note that the cobalt blue border can vary in color from piece to piece. Buyers are also selective about the appearance of the crackled background glaze, which was produced by rapidly cooling pottery hot from the kiln.

Of course, Dedham was not the only art pottery to use rabbits as a decorating motif. Prentiss notes, “One of the things I’ve been doing is a map of Boston at different periods of time, and around 1905 there were a ton of potteries in Boston.” Last December, Skinner’s sold two plates painted by the Saturday Evening Girls group of female decorators – one with rabbit border, one with goose border – for $1,659. At the same sale, a child’s bowl with a rabbit from the Paul Revere Pottery in Boston brought $326. 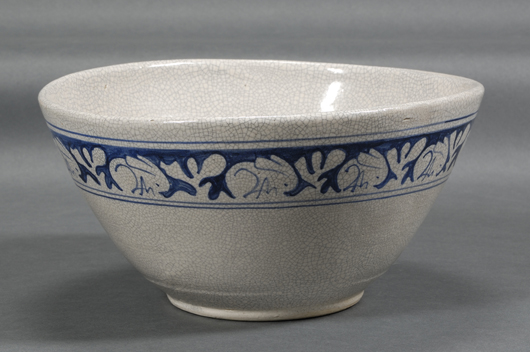 Competition can be keen for rarely seen forms, such as this large bowl (dia. 11½ inches) which sold for $1,422 at a June 2008 20th Century auction. Image courtesy Skinner Inc. 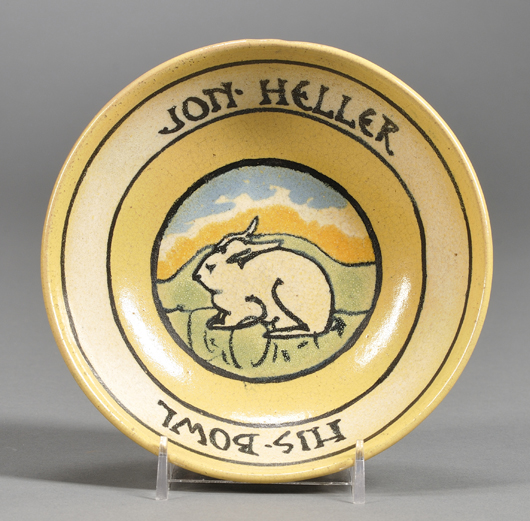 The Paul Revere Pottery in Boston would personalize children’s dishes with the owner’s name. This 1937 rabbit-decorated bowl with the inscription “Jon Heller – His Bowl” sold for $326 last December. Image courtesy Skinner Inc. 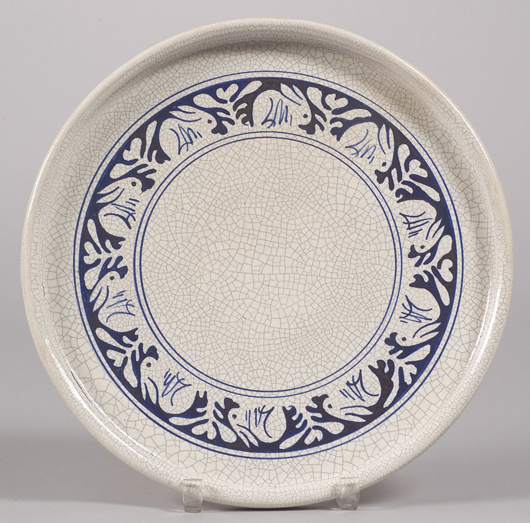 An unusual and very useful serving piece, this Dedham round tray with rabbit border (dia. 13½ inches) sold for $999 in 2006. Image courtesy Skinner Inc. 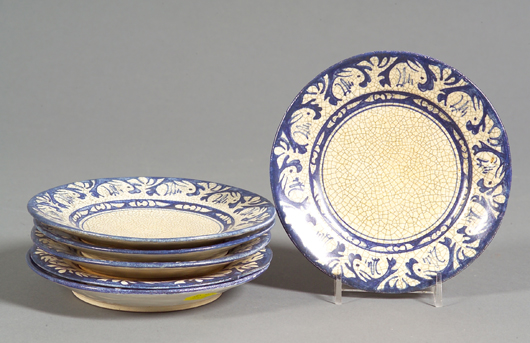 With an eye on auction offerings, collectors can gradually assemble a large service of Dedham rabbit-bordered pottery. This lot of 6 bread and butter plates went for $382 at a December 2007 sale. Image courtesy Skinner Inc. 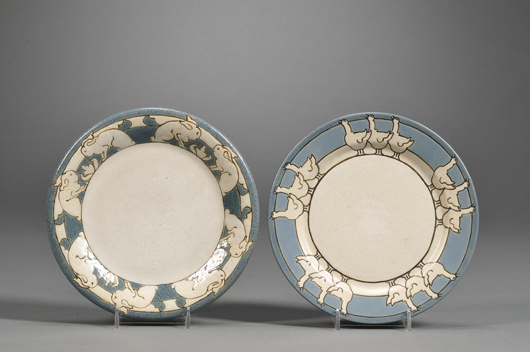 The female decorators of the Saturday Evening Girls Pottery in Boston also edged services with animal borders. These plates – one surrounded by stylized rabbits, one by geese – date to 1913 and 1911 respectively; the pair brought $1,659 at Skinner’s in December 2010. Image courtesy Skinner Inc. 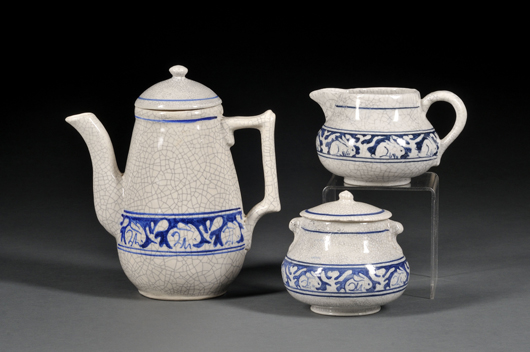 This coffee pot, creamer, and sugar bowl are among the many pieces of Dedham pottery to be offered in the June 25 Skinner sale. The three items also show the variations in hue of the cobalt blue border found among rabbit-bordered dishes. Image courtesy Skinner Inc. 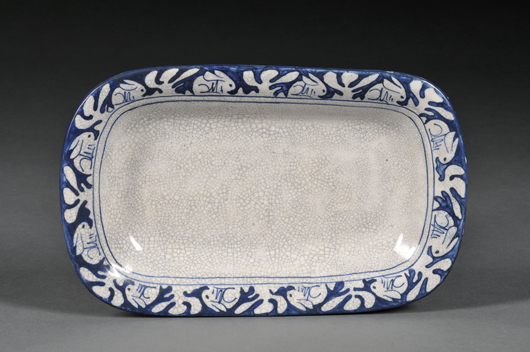 Highly desirable to collectors of the ware, this attractive rectangular platter comes up for sale in June. Image courtesy Skinner Inc. 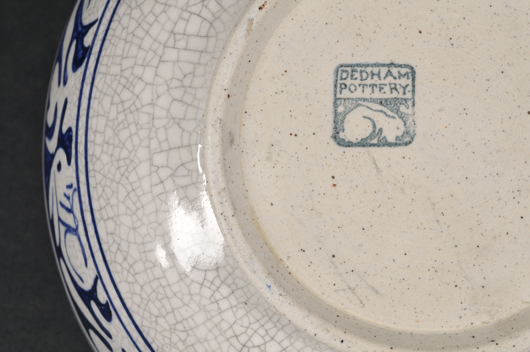 The distinctive Dedham rabbit from the popular dinnerware border was also part of the stamped mark that identified the pottery’s products. Note also the characteristic crackle glaze found on all pieces in the line. Image courtesy Skinner Inc.