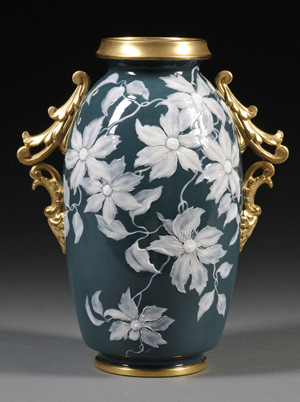 Ingenious fans are looking for new ways to sustain their Downton Abbey high, as the series goes into hiatus. Season Two offered lingering looks at the glories of the formal table, which provided a glamorous backdrop for laughter, tears and romantic intrigue.

Books like The World of Downton Abbey by Jessica Fellowes and Lady Almina and the Real Downton Abbey by the Countess of Carnarvon, are filled with fascinating information on period interiors and manners.

Collectors who would like to make the enjoyment last can entertain in Downton Abbey style, with appropriate china and silver from a century ago. British porcelain from the decades before and after 1900 comes up at auction every weekend.

Some categories are avidly sought-after by specialists, while others offer real bargains for savvy collectors. Auction houses such as Skinners in Boston include these wares in regular sales of fine ceramics.

As the popular television series reveals in each episode, the pre- and post-World War I decades were a period of unsettling changes in mores and fashions. Traditional British porcelain manufactories, many with roots in the 18th century, continued to make formal tableware and garnitures as they had throughout the 1837-1901 reign of Queen Victoria.

At the same time, small firms were producing fresh art pottery lines that appealed to buyers eager to own the latest thing. William de Morgan, for example, had been friends with Arts and Crafts Movement guiding spirit William Morris, and his London workshop produces various experimental lines.

No educated person who went to exhibitions or expositions would have been unfamiliar with the Art Nouveau style, which made its mark around 1890-1910. By the time the Great War ended in 1918, Art Deco and the jazz age of the 1920s were just around the corner.

Yet in the great city and country houses, porcelain decorated with classic patterns by old firms such as Worcester, Minton, Wedgwood, Copeland and Coalport still set the formal table. Directors lavishly set out china to recreate that look for period drama, and collectors can put together services to achieve the same effect at home.

Families who regularly inherited money, land and houses filled with furniture and decorative arts would display cherished objects from many different periods.

A dining room or grand salon might contain 18th century heirlooms, porcelain purchased during Victoria’s reign, and a variety of fashionable decorative pieces. The latter might range from Minton’s latest product to Chinese vases to a whimsical art pottery jug by the Martin Brothers.

Stuart Slavid, the expert on fine ceramics at Skinner’s, has heard the Downton Abbey buzz around the sale room: “There was a little conversation going on here yesterday among several people who were all big fans of the show.”

The influence is subtle: The collector may not set out to recreate that fictional table, but when an elegant form comes on the block, paddles go up. Porcelain in the Jan. 14 Boston sale included a circa 1885 Wedgwood Auro Basalt covered potpourri vase sold for $2,489; a pair of ornate Royal Worcester vase with masks on the handles, circa 1900, for $1,067; and a Royal Crown Derby dark blue ground vase dated 1920 for $1,541.

Slavid emphasizes that porcelain in that period was not confined to the table: “It was a more formal lifestyle so the decorative appeal was much more formal. They all had china cabinets; that’s probably why so many pieces survived.” Porcelain would have been displayed in such cabinets in the main living rooms, on bedroom mantels and dressing tables, and, of course, on impressive sideboards in the dining room.

Collectors pay a premium for the work of well-known artists, and many of the tour-de-force vases and centerpieces are signed. The expert explains, “So you could have a Royal Worcester hand-painted vase and if it was done by a particular artist, it’s the artist that will command the price.”

One decorating technique in vogue at the turn of the century was pate-sur-pate, in which relief designs are carefully built up by applying layers of slip. M.L. Solon, who signed his work, brought the French technique to Minton, and many other firms imitated the wares.

Slavid points out, “It’s tremendously time-consuming because each layer is applied separately. As you get different heights and depths of the relief, some of the most impressive pieces could take nine months to finish.”

Only the wealthiest collectors could have purchase pate-sure-pate when it was made, and signed examples command the most formidable prices. An 1889 Louis Solon decorated vase brought $52,140 at Skinner’s in 2008. An 1892 Grainger Worcester vase by an unknown artist in this year’s sale sold for a more reasonable $2,607.

Collectors who want period impact on the table can choose from a variety of decorated service plates. These beautiful dishes were not meant for the rough and tumble of eating and washing up. They would have been removed or surmounted by another plate when the food service began.

Bargain of the day was a Minton porcelain partial breakfast set, circa 1875, with a covered bowl and compote for only $237. Decorated in an intricate transfer design with gold accents, these pieces could be used to enhance simpler porcelain for an elegant effect on a budget. 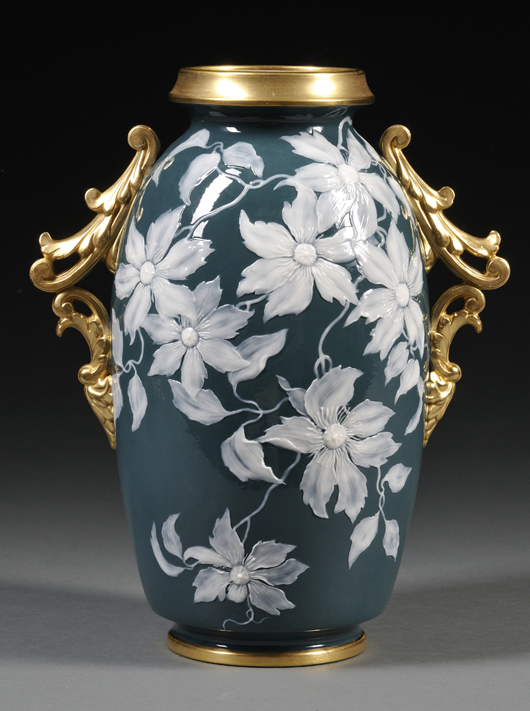 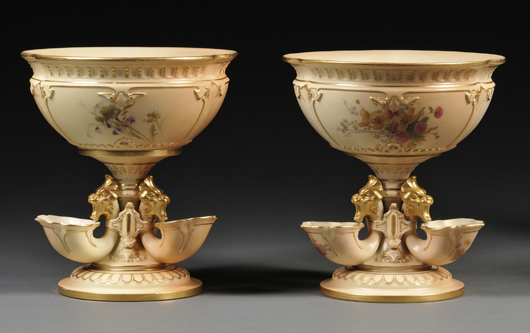 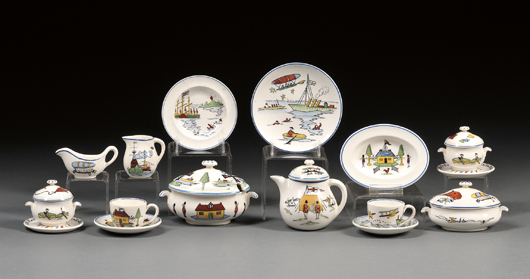 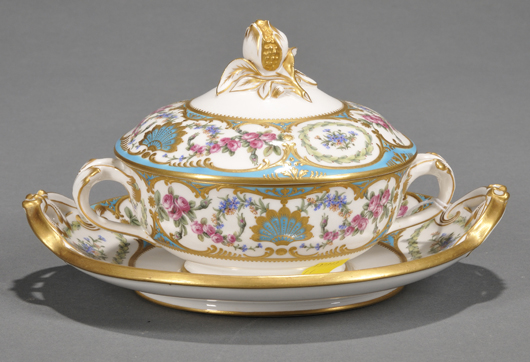 Fine individual examples of turn-of-the-20th century porcelain can often be acquired for reasonable sums. This beautifully-decorated Copeland porcelain covered bowl and stand, circa 1896, was purchased in the January 2011 sale for $296. Image Courtesy Skinner Auctions. 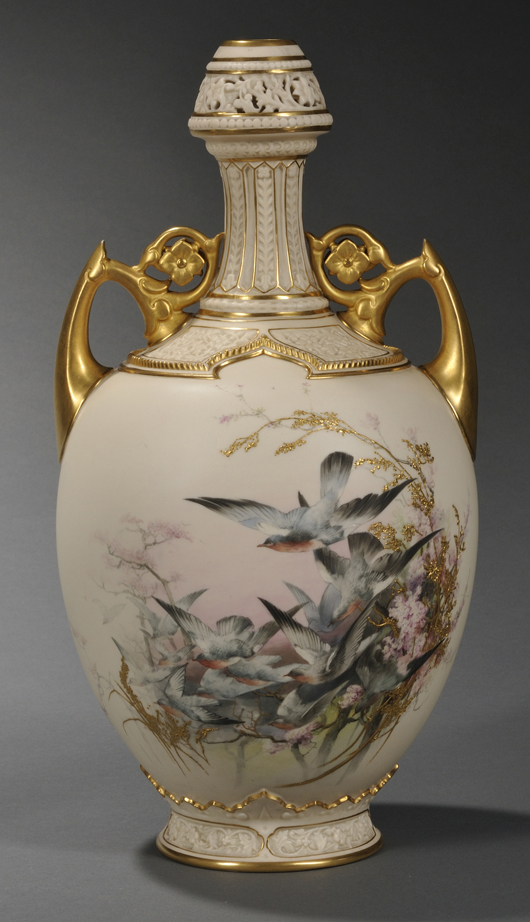 Collectors pay a premium for individual pieces decorated by well-known artists. This bottle-formed Worcester porcelain vase, circa 1888, enameled with birds in flight by Charles Baldwyn, soared to $5,925 (est. $800-$1,200) in a 2011 auction. Image Courtesy Skinner Auctions. 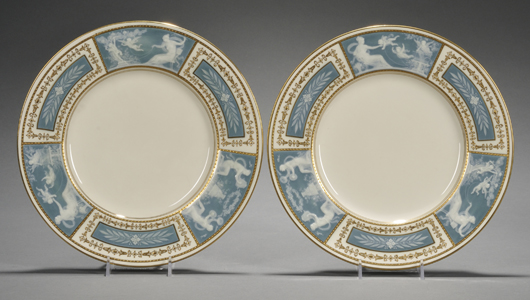 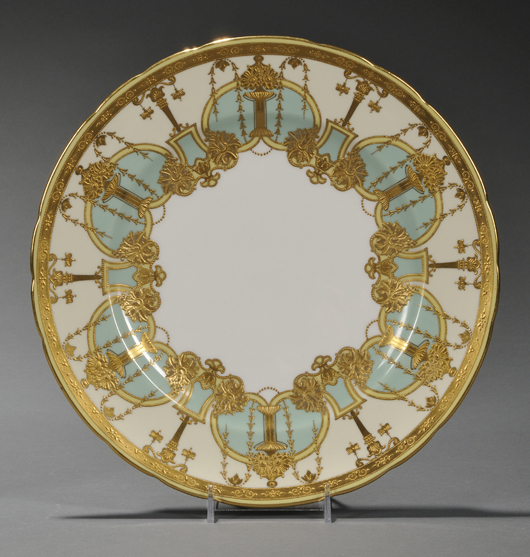 Flush with industrial profits, wealthy Americans wanted to buy the best. These Royal Crown Derby service plates, circa 1911, were retailed in the United States by Tiffany & Co., New York; the gilded and enameled set of 10 sold in 2011 for $1,659. Image Courtesy Skinner Auctions.