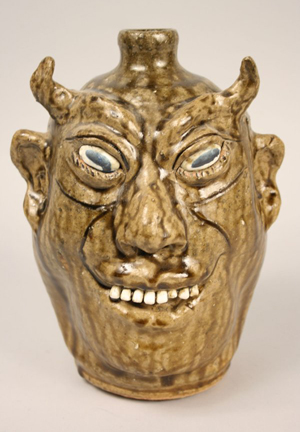 The devil face jug became best-selling variation on the form. This example, covered in an olive green alkaline glaze and signed by Georgia potter Lanier Meaders (1917-1998), sold for $2,000 at Case Auction in 2009. Courtesy Case Auctions.

Since ancient times, potters have made rounded jugs in the shape of the human head. There are early examples from Athens, jugs with humorous expressions were made by English potteries, and even Pablo Picasso applied his unique style to head-form vases.

Face jugs from the American South belong to separate tradition that continues to the present day. These vessels have roots in African-American cultural heritage but later become a bestselling product for regional potteries in the 20th century. Both the early folk creations and the signed works of later potters are sought out by collectors.

“Face Jugs: Art and Ritual in 19th Century South Carolina,” a traveling exhibition organized by the Chipstone Foundation and the Milwaukee Art Museum, is now view through April 7 at the Birmingham Museum of Art. The show explores the early history of this form as it first appeared in the Edgefield District of South Carolina in the second half of the 19th century. At that time, the face jug was a small vessel of turned stoneware with eyes and teeth made from pale kaolin, a locally available clay.

The exhibition text explains, “Historians originally believed that the face jug was utilitarian and used to store water. Multiple theories later surfaced involving its function as a container of magical materials and its ritualistic use. New research has shown that the vessel was likely multipurpose – and a coded object meant to be misunderstood.”

Dr. Graham Boettcher, curator of American art at the Birmingham Museum of Art, is delighted to have the show: “It fits in beautifully with our strong ceramics focus. Clay is the one material that connects all the departments in our museum. Whenever we have the opportunity to host a ceramics exhibition – particularly one that covers new territory – we are delighted to take it. This is the first time that all of these face jugs have been brought together in one place. In the course of researching and curating the exhibition, Claudia [Mooney of the Chipstone Foundation] uncovered face jugs that were sitting in private collections which had never been on public view.”

He continued, “It’s a small show with great visual impact – I think there are 18 full jugs and a number of fragments. In a corner of the exhibition, we have added pieces from our own African collection, which are very clearly marked. We thought that was appropriate, since we have a major collection of African ceramics – I believe it’s the largest institutional collection in the United States. There are figural traditions in African ceramics, and so we show some African face jugs.”

The Birmingham Museum of Art presented its first Bunting Biennial Ceramics Symposium in February 2013. The theme – “Clay Embodied: Ceramics and the Human Form” – was a perfect complement to the face jug exhibition. Ceramic artist Magdalene Odundo was the keynote speaker, and well-known researcher Garth Clark gave a presentation on the vessel form. Curator Emily Hanna spoke on the museum’s recent acquisition of the Dick Jemison collection of African Ceramics mentioned above.

Serious collectors will enjoy reading more about the early pieces in the exhibition in the blog posts written by Claudia Mooney of the Chipstone Foundation, which can be found on the Milwaukee Museum of Art website, www.mam.org. She discusses at length the possible implications of a rare inscription on the back of one example in the exhibition, which was made around 1862.

She states: “We know that Edgefield face jugs were created by slaves, and later free African Americans in that district of South Carolina. We know that they were made from about 1860 to about 1880 or so, when they suddenly stopped being produced. We know that the form was appropriated by white potters in the 1880s.”

Working the clay with traditional techniques, a number of these later potters achieved national recognition as folk artists. Their signed face jugs are avidly sought after by collectors when they appear at southern auction houses, including Brunk Auctions in Asheville, N.C., and Case Auctions in Knoxville, Tenn.

One of the best-known makers of 20th century face jugs is Georgia potter Lanier Meaders (1917-1998), who became a National Endowment for the Arts National Heritage Fellow in 1983. He took over the pottery founded by his grandfather and continued by his father, when he fulfilled an order for face jugs to sell at the first Festival of American Folk Life in the 1960s.

The NEA profile of the artist estimates that Meaders may have made 10,000 examples of the form during his career: “All his life, he continued the alkaline-glazed stoneware tradition of the area, working alone with a foot-powered treadle wheel and a rectangular wood-fired ‘tunnel’ kiln.”

“The face jugs produced by Lanier underwent a considerable evolution. The first ones featured blobs of clay representing eyes, now, and mouth applied to a jug wall. Later ones featured careful attention to facial details.”

Another important maker was Burlon Craig (1914-2002) who worked in the town of Vale, N.C, and was named a National Heritage Fellow in 1984. Daisy Wade Bridges, former associate curator, contributed the chapter on “North Carolina’s Ceramic Heritage” to North Carolina Pottery: The Collection of the Mint Museums (2004), which includes a number of examples of Craig’s face jugs.

She wrote, “One other popular product of the Catawba Valley kilns has been face jugs. Probably brought to North Carolina from the Edgefield district of South Carolina, face jugs have puzzled ceramic historians for decades. … There are many folktales about their use, but about the only thing known for certain is that they are popular with collectors and sell well. As a result, they have been produced in large numbers for the past half-century. Burlon Craig’s large jugs with weeping eyes are particularly fine examples of the form.”

Many examples of earlier and later face jugs have passed through the hands of Southern pottery expert John Case. Most have molded features, but in 2011 the auction house sold a mid-19th century jug discovered in Washington County in southwest Virginia, which had a profile portrait head painted in cobalt, rather than a sculpted face. He notes, “That’s was a very fascinating piece because we have few early face vessels from the East Tennessee-Southwest Virginia area.” The exceptional unsigned jug brought $5,800.

Asked what sort of consignments of the face jug form he would like to see in the future, he refers back to the early types on view in the current exhibition: “What I would like to see is a 19th century example with exaggerated features. Some of the early brown ones are fairly simplistic, but there is an elegance in the simplicity.”

After closing in Birmingham in April, “Face Jugs: Art and Ritual in 19th Century South Carolina” travels to the Georgia Museum of Art in Athens for a May 4 – July 7 run. 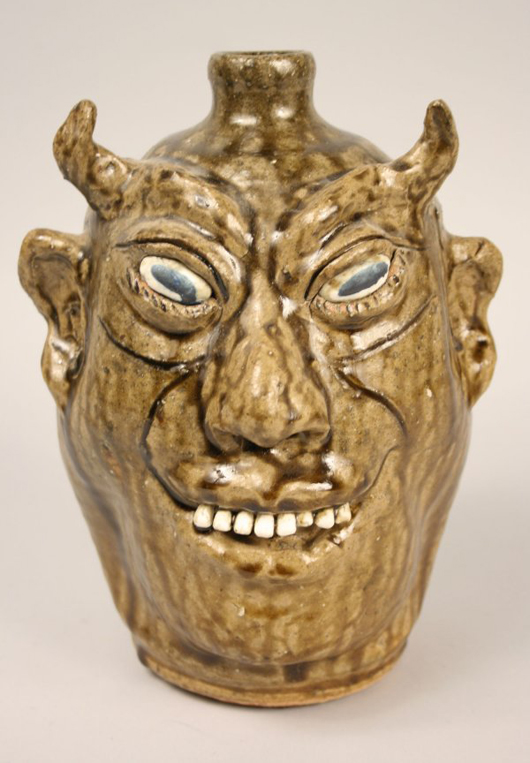 The devil face jug became best-selling variation on the form. This example, covered in an olive green alkaline glaze and signed by Georgia potter Lanier Meaders (1917-1998), sold for $2,000 at Case Auction in 2009. Courtesy Case Auctions. 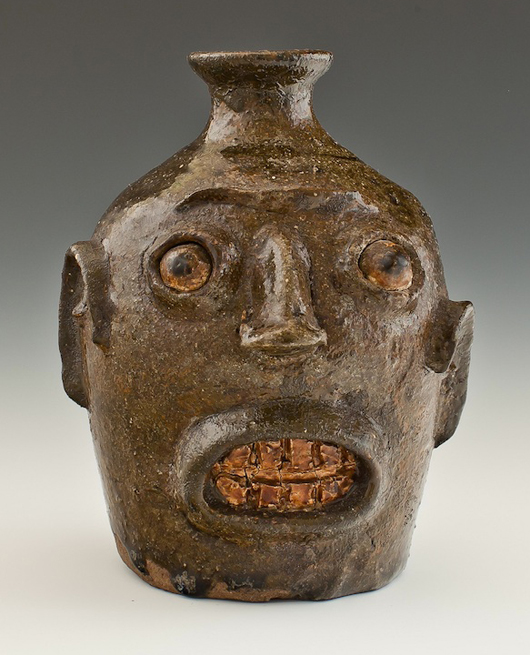 ‘Face Jugs: Art and Ritual in 19th Century South Carolina’ is on view at the Birmingham Museum of Art through April 7. Organized by the Chipstone Foundation and the Milwaukee Art Museum, the exhibition includes this circa 1862 head with a rare inscription on the reverse. Chipstone Foundation Collection. 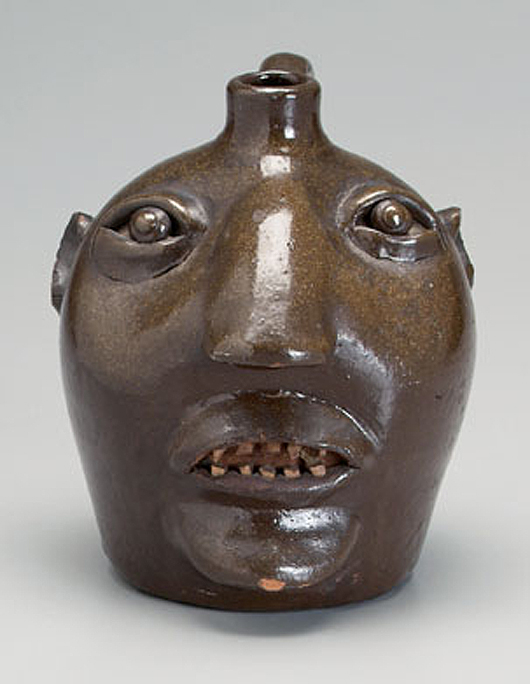 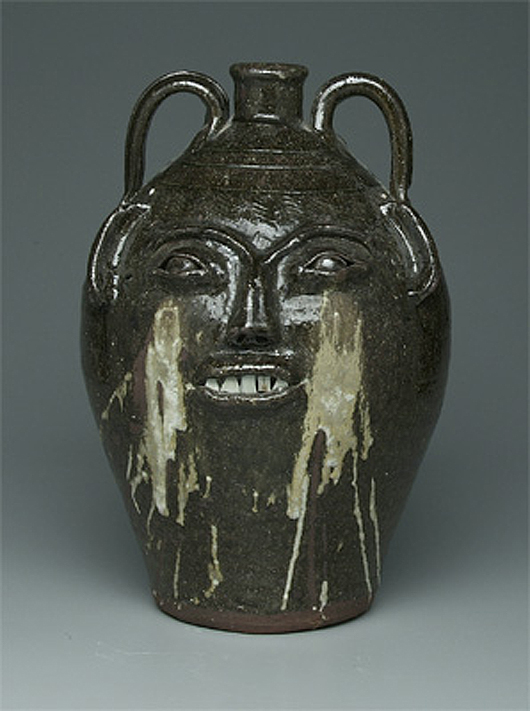 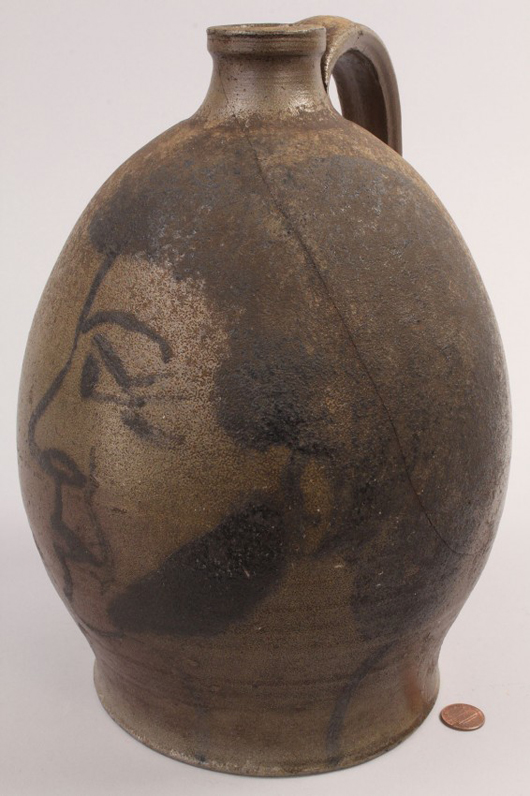 Discovered in Washington County in southwest Virginia, this mid-19th century jug has a profile portrait head painted in cobalt, rather than a sculpted face. The unsigned piece brought $5,800 at Case Auctions in 2011. Courtesy Case Auctions. 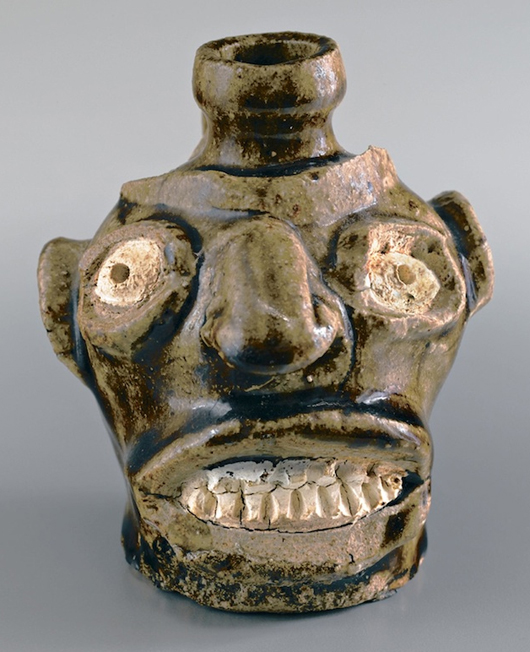 Unlike the more polished products of 20th century potters, early face jugs are often roughly modeled with exaggerated features. This example – only 4 1/4 inches high – is on view in the traveling face jugs exhibition. Private Collection. 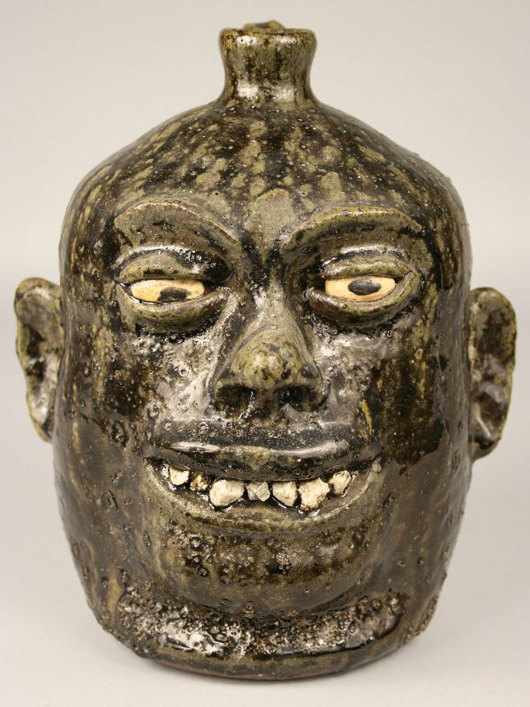