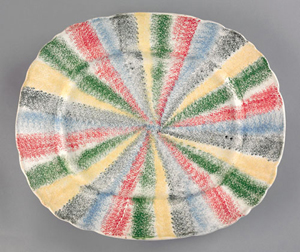 Absolute proof that rarities bring the highest prices, this 13-inch platter decorated with a rainbow of five spatter colors sold for a record $39,780 in April 2009. Courtesy of Pook & Pook

Spatterware is an amusing descriptive term for a brightly decorated English pottery widely imported to North America in the 19th century. Its popularity dates to the earliest days of Americana collecting, and rarities of color and form still demand high prices at auction in the 21st century.

In the 1944 classic Pennsylvania Dutch Stuff, Earl F. Robacker wrote with considerable enthusiasm: “Spatter has been so widely collected of recent years, and so much has been added to collections that give every appearance of remaining as firm as Gibraltar, that the newcomer must be contented with picking up an occasional piece here and there.” As the market turns, many of these collections have re-emerged in recent years, giving new buyers at chance at very fine material.

Robacker continued, “Spatterware is a Staffordshire product made and decorated for the American trade. It is a rather heavy, soft-paste tableware, and its ornamentation is primitive and rather gaudy. We must suppose that it was shipped to this country in considerable quantity and in a marked variety of patterns, perhaps as early as the end of the 18th century, but more probably in the decades from 1800 to 1840.”

Although this description comes from a past collecting age, the statement holds true in most respects. Spatter pieces were brightly and quickly decorated, and the wares were sent by sea to the young United States in great quantity. The business heads at English potteries had a particular talent for recognizing demand in markets abroad and producing the perfect product supply.

Thus George Washington had imported salt-glaze stoneware in his cupboard, many middle-class tables gleamed with blue-printed transferware, and Pennsylvania consumers seemed to have a particular fondness for spatter. Recognizing its charm, Henry Francis du Pont collected spatterware in the 1930s and 1940s. Visitors to the Winterthur Museum in Delaware will be dazzled by the variety and brilliance of the resulting collection on view in Spatterware Hall.

The description “spatter” sounds rather messy, yet decorators had precise control in their application of fine dots of color with a brush or other tool. The technique was commonly used to provide a colored border or background for quickly painted freehand patterns. These central designs may be birds, flowers, or buildings. Value rises with the rarity of the pattern—a butterfly or windmill, for example—and the color of the spatter border. Blue and red are common colors, while yellow or green are rarer.

“Rainbow spatter” is a collector’s term for pieces decorated only with bands or swirls of spattered color. Examples can achieve the quality of an abstract painting. Rarity of color, design and the ceramic form can raise value. “Stick spatter” or “cut sponge” refers to stamped designs that were also combined with free hand motifs and printed transfers. Once again, these wares were principally imported from England, but similar pieces were produced on the Continent.

When its collecting began, spatterware was treated as a type of folk art and considered the perfect accompaniment to painted American furniture and hand-made quilts. Most pieces, however, were decorated in a rapid, assembly-line fashion within or specifically for English pottery manufacturers. Art nevertheless plays a strong role in its appeal and value. Some decorators simply had a flare in their application of the colored spatter fields and freehand motifs.

Trends in collecting today find buyers less interested in more common pieces, such as the traditional peafowl center with blue border, and more interested in rare designs and colors. The more abstract rainbow spatter, particular in unusual hues, has come on strong with its hypnotic designs that could hold their own in a room full of Warhols.

At Pook and Pook in Downingtown, Pa., a rainbow spatter rectangular platter decorated with rays of red, blue, black, yellow and green brought a record $39,780 in April 2009. In January of this year, a 6-inch plate decorated with swirls of black, yellow, red and green sold for $10,665 at the auction house.

Debra Pook, president and decorative arts specialist at the firm explained, “That was a very unusual form with very unusual colors. So that kind of thing is going to bring money. I think the market is still very good for the exceptional pieces, as is true in most areas of the antique field. The market is good for the best.”

“I think the people who collect spatter have pretty full collections. What they’re looking for right now is the exceptional pieces—great rainbow pieces, unusual patterns, unusual forms of a normal pattern, variant colorations.” For beginning collectors, on the other hand, this could be an excellent time to fill a cupboard with spatter, since prices for the basic pieces have come down from the peaks of the 1990s.

Pook & Pook’s next auction on April 20-21 will include a group of spatterware, along with period furniture, fine art and other decorative arts. Debra Pook said, “We have a nice collection assembled by a gentleman in New York City, which he purchased many years ago from the late Bea Cohen, a well-known Pennsylvania ceramics dealer.” 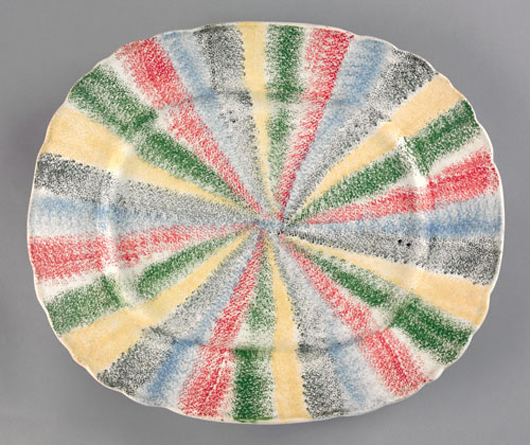 Absolute proof that rarities bring the highest prices, this 13-inch platter decorated with a rainbow of five spatter colors sold for a record $39,780 in April 2009. Courtesy of Pook & Pook 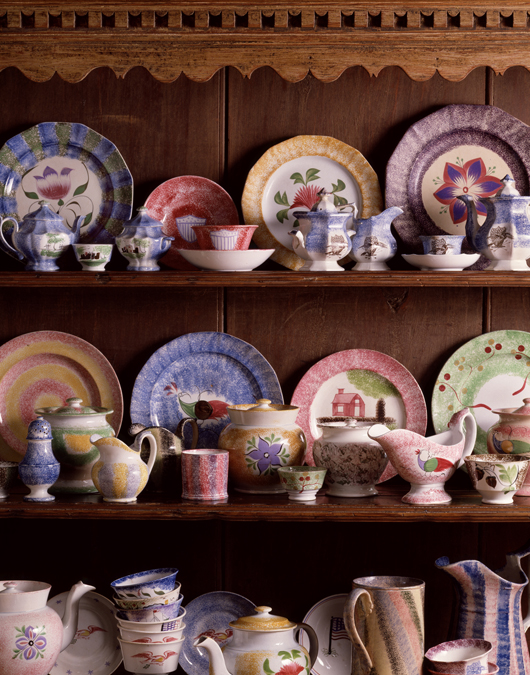 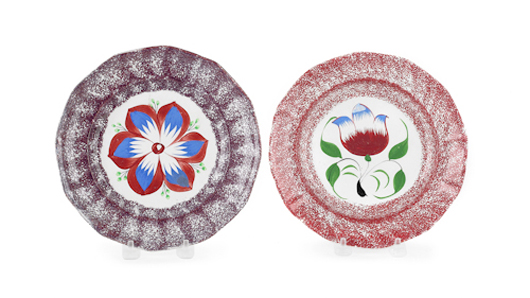 Spatter decoration was often used a border for bright freehand motifs. Perfect for display, two 8-inch plates – a purple-edged dahlia and a red-edged tulip – sold for $652 in January. Courtesy of Pook & Pook 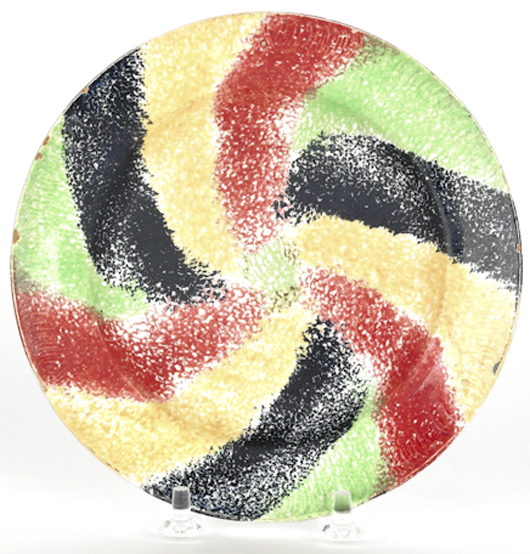 This 6-inch plate grabbed collector attention with its hypnotic swirl pattern in an unusual color combination. Final price for the January lot was $10,665. Courtesy of Pook & Pook 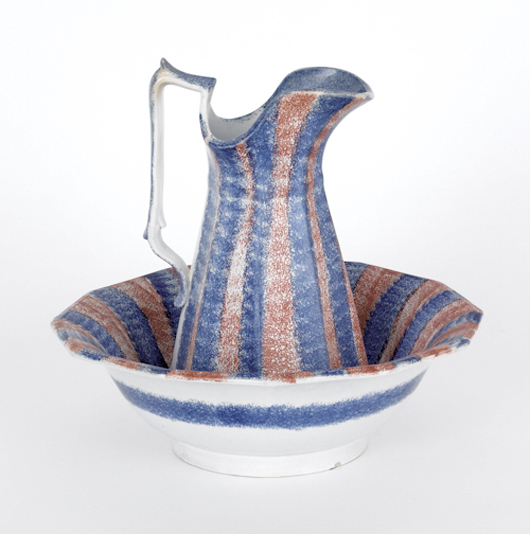 This 12-inch pitcher with matching bowl circled by alternating blue and red spatter bands makes a bold statement on the shelf. The set brought $770 at Pook’s January sale. Courtesy of Pook & Pook

From the same 19th-century time period as other spatter wares, “stick spatter” pottery may combine freehand painting with repetitive stamped motifs, such as the round flowers seen here. Some pieces add transfer prints; the sought-after rabbits-at-play on these plates took the trio to $1,007. Courtesy of Pook & Pook