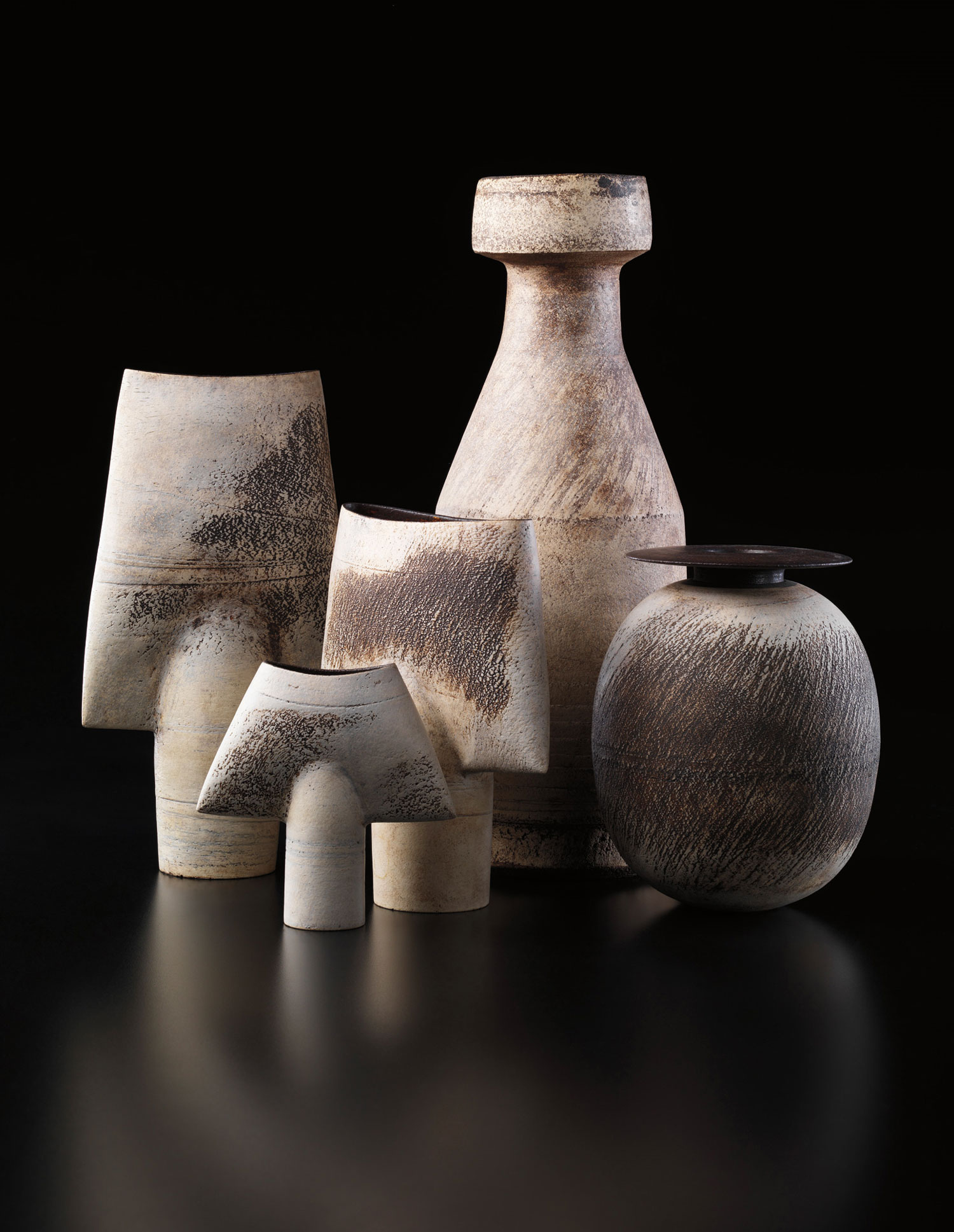 NEW YORK – Hans Coper (1920-1981) was a transformative genius in the ceramics world, so it is not surprising that his impressive body of work has captured the attention of both art historians and collectors. Although the medium was clay, his vision transcended the material and became fully integrated into the world of contemporary design during the decades in which he created his sculptural vessels.

Coper had no background in ceramics when he fled Nazi Germany for England in 1939. After being interned in Canada for two years, he spent the remainder of the war serving in Britain in a noncombatant role. At the end of the conflict, he needed work and – in a watershed moment – was hired by skilled potter Lucie Rie (1902-1995), who had left Austria for England in 1938. Coper proved to have remarkable natural abilities, both in pottery mechanics, such as throwing clay on the wheel, and also in ceramic design where he created his own vocabulary of forms.

Rie and Coper worked together for a dozen years, signing some pieces jointly – and they remained friends for the duration of his life. The Fitzwilliam Museum at Cambridge University, which owns works by both potters, notes in a joint biography: “At the same time Rie’s and Coper’s personal styles stared to diverge: While hers remained functional in focus, his became increasingly sculptural in ambition. Eventually, in 1958, Coper decided to set up his own studio … ” Also while Rie never taught formally, Coper began to teach in London in the 1960s, first at the Camberwell School of Arts and later at the Royal College of Art.

In 1958, Coper established his own studio at Hammersmith in London. In 1960, he executed an ambitious architectural commission for a wall mural at the Swinton Community School, Mexborough, South Yorkshire. While many wall murals are paintings, Coper’s design used inserted circular stoneware forms varying in size, glaze color and surface texture. The mural project set a record for the artist’s work when it sold on Sept. 27, 2011 at Phillips London “Design” sale for 181,250 pounds (est. 50,000-70,000 pounds), almost $282,000.

Never to be sold, his best-known creation is an array of six massive candlesticks which stand like abstract caryatids on either side of the High Altar at Coventry Cathedral in England. In November 1940 during World War II, the 14th-15th century St. Michael’s Church in Coventry was severely damaged by incendiary bombs; only outside walls and the tower spire were left standing. The cornerstone for a new cathedral was laid in 1956 by Queen Elizabeth II, and many important artists of the day contributed elements such as stained glass and sculpture to the interior. The completed new church standing by the ruins of the old was consecrated in 1962. Coper’s 7-foot-high candlesticks were created using thrown circular sections joined by metal supports. The trio on each side is composed of a darker center pillar flanked by banded and textured columns of lighter coloration.

Whether the revered object is an ancient Greek black-figure vase or Coper’s studio pottery, the clay has been shaped into utilitarian forms. But these works are no longer displayed filled with wine or flowers, because attention has shifted from the vessels’ function to their superb design and decoration. The Coventry candlesticks are deeply moving sculptures that bring both light and a sense of enlightenment to their altar setting. Such monumental works have only whetted the desire of collectors to own examples of Coper’s more easily possessed small scale constructions.

Han Coper’s life was cut short by illness in 1981, which makes collectors even more eager to seek out his work from the 1950s, 1960s and early 1970s. Much of the artist’s best work has been sold at Phillips in their New York and London “Design” sales over the last 10 years. Ceramics specialist Ben Williams is the firm’s expert on the artist and oversaw the New York auction of the Betty Lee and Aaron Stern Collection in December 2013, which included many carefully selected examples of Coper’s stoneware.

In an interview with ACN, he noted, “Phillips is in a position where they get offered the best in the market. The problem is – for Coper especially – that there’s not a lot of work out there. When a great collection like the Sterns’ comes up, people realize that it’s an opportunity. Even people who haven’t bought a pot in years are back in the market because they want something form that great collection. That’s when the really big jumps in price happen.”

The catalog of the Stern Collection – available online – includes stunning photos of Coper’s work as it was displayed by the collecting couple. Williams said, “Betty Lee is someone I’ve known for over 20 years. She had a really remarkable collection, so that was probably for me the pinnacle of my auction career. I said to her, rather than do an auction catalog that is a stock studio style, let’s mix it up and do some vistas to illustrate what you created in your home.”

Coper’s work long ago made the transition from ceramics sales to multimedia design sales. The same collectors who might pay millions for a Francis Bacon painting are bidding on this 20th century stoneware, so individual examples that brought four or five figures less than a decade ago, now regularly fetch six figures. As Williams put it, “We would be selling the modernist pots in amongst modernist furniture. We gave it a completely new audience and it just really took off.

“Most really great artists were being influenced by other things that were going on around them outside of clay,” he continued. “Coper, in a way, has come full circle. When he started out, he was always considered to be an artist. He was hanging out with other artists in many different media, all of those commissions that were being done around the time of Coventry Cathedral. The people who were buying that work from him in the 1950s, 1960s, 1970s – all the way through really – they were people who had art on the walls and didn’t consider themselves ceramic collectors, they were collectors of fine modern art.”

Ben Williams also has seen a broadening of the market to include all of Coper’s output: “When I started working in the auctions in the early 1990s, at that point the most valuable pieces – apart from one or two very large scale works – were the late ones, the Cycladic pots. They were seen as the final statement of his career – but some of his early work is incredibly powerful as well. As a younger man, he was a very powerful thrower, and he was able to make some extraordinarily large pieces. There is more equality now in price between the best of the early work and the best of the late Cycladic pots.” As the name indicates, Coper was strongly influenced by ancient artifacts, most notably the art of the Cycladic island culture, which flourished in the Aegean around 3200-2000 B.C.

In the Stern catalog, Hans Coper is quoted as saying, “My concern is with extracting essence rather than with experiment and exploration.” Garth Clark, ceramics expert and author of many books in the field, recently talked about his admiration for Coper’s subtle artistry: “He started making pretty conventional things and then eventually his work began to change. He would play with volumes; he would flatten his pots. He would compress the volume, and it created a kind of visual illusion. Also, in his later work, he created beautiful constructions and profiles.”

Clark continued, “Right at the end, he made the Cycladic pieces. In those pots, you have these exquisite shapes and outlines – extraordinary silhouettes. And the pot itself again is not fully round so it moves them between a 2-D world and a 3-D world. That gave a very special quality to his work. No artist at the time was doing that flattening of the volume, so that was very rare.”

References on the artist include the still-available earlier study Hans Coper by Tony Birks and Modern Pots: Hans Coper, Lucie Rie and Their Contemporaries, The Lisa Sainsbury Collection by Cyril Frankel (University of East Anglia 2006). 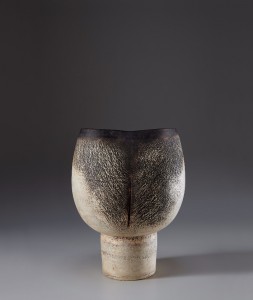 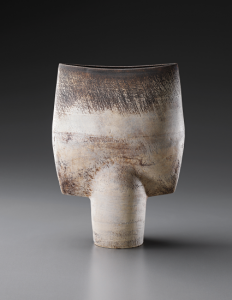 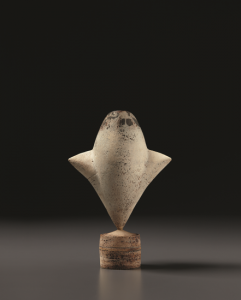 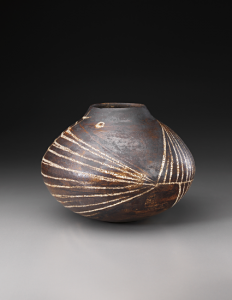 Coper’s rare early works were at times decorated with simple abstract designs. Created not long after he began making pottery, this 1953 globular stoneware pot covered with dark manganese glaze brought $197,000 (est. $30,000-$40,000) in the sale of the Stern Collection. Phillips image 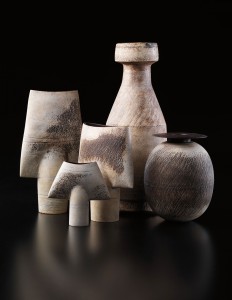 A carefully chosen selection of significant works by Hans Coper was assembled by influential American collectors Betty Lee and Aaron Stern. The Phillips New York sale of the collection in late 2013 established a new price scale for the artist’s designs. In this grouping of vases, the ovoid form with disc top at right, made about 1969, brought $100,000. Phillips image