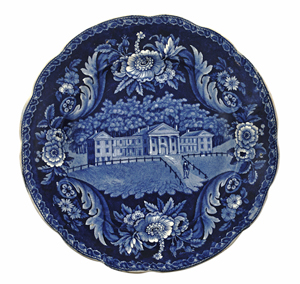 With holiday entertaining just around the corner, everyone is asking, where are those dishes? The very concept of a matching set of dishes goes back to Roman times, and by the 18th century wealthy consumers were ordering extensive porcelain services with unifying patterns from Chinese, English and European sources.

Middle- class households had the same desire for attractive services—at more affordable prices. Spurred on by the popularity of blue and white Chinese porcelain, British potteries developed a method of transfer-printing complex designs on ceramics. During the early decades of the 19th century, a repertoire of Oriental designs was quickly expanded with patterns based on scenic contemporary prints.

For American collectors, the most important patterns are those defined as Historical Staffordshire, transfer-printed pottery with views of American patriotic figures, national buildings, and scenery created to appeal to buyers in the newly formed United States. The early October sale of the Goldberg & Brown Collection of Historical Blue Staffordshire at Pook & Pook featured an illustrated catalog of almost 600 lots, which celebrated the intricate patterns and complex forms of this desirable ceramic specialty.

Henry Francis du Pont was an enthusiastic and influential collector of transferware with American views, buying examples during the 1950s to furnish the Blue Staffordshire Room at Winterthur. Leslie Grigsby, senior curator of ceramics and glass at the museum, says, “I think he was interested in it all through his collecting career. He often was collecting to furnish a particular room, and there are over 180 pieces of underglaze blue in that one room.”

Perhaps England had been on the losing side—not only during the War of Independence but more recently in the War of 1812—but savvy British businessmen quickly geared up to produce patriotic designs that could be sold through American merchants. For example, the Staffordshire firm of Enoch Wood & Sons created a pattern call “Commodore Macdonough’s Victory,” celebrating his defeat of the British on Lake Champlain. Commercial advantage obviously trumped any lingering hard feelings.

As can be seen in the Pook catalog, most designs for the American market feature views of important buildings or attractive landscapes and seascapes based on prints made by artists who had visited the United States. Fortunately for collectors, many bear the printed or impressed name of the maker on the back as well as a scene title. In the Wood & Sons series of Erie Canal views, the maker specifies the scene, such as “Aqueduct Bridge at Rochester,” providing valuable historical information.

Unlike our modern “service for 12” in a single pattern, Staffordshire transferware sometimes features different central views, united by a common decorative border. American designs are printed a strong saturated cobalt blue which ranges from bold to almost inky dark, so we can assume that was what sold best in this country. Following these rules of supply and demand, the rare views that bring top prices today were surely the least popular sellers when new. Collectors will also pay a premium for rare forms that seldom appear. The same dignified designs that were applied to coffee pots also covered chamber pots and pitcher and bowl sets for the bedroom.

Hayden Goldberg and his partner Curtis Brown were especially fond of the Boston State House pattern by John Rogers & Son. While a useful 17-inch platter brought $830, a decorative reticulated serving basket and tray with the scene sold for $4,740 (est. $1,000-&2,000). An even rarer form—a 4-inch-high ladies spittoon—brought $7,110.

The rarest pattern in the entire sale was a plate with the Mount Pleasant Classical Institute in the Connecticut River Valley, one of only three known, which sold for a stunning $21,330 (est. $4,000-$6,000). The plate was impressed “Clews” for the James and Ralph Clews works in Cobridge, Staffordshire.

Lots which combined a spectacular form with a desirable view also did well. There were two reticulated baskets with a view of the West Point Military Academy as it appeared in the first quarter of the 19th century. One with a matching undertray sold for $4,977 (est. $2,000-$3,000) and another with an undertray with a scene of the Catskill Mountains sold for $5,688 (est. $2,500-$3,500).

Lafayette (1757-1834), the French nobleman who had fought by Washington’s side in the Revolutionary War, became America’s first pop culture hero when he returned to the United States for a visit in 1824. Staffordshire were quick to produce transfer patterns with portrait busts, scenes of his activities, and even views of his ancestral home in France. A large platter with the legend “Landing of Gen. Lafayette at Castle Garden New York 16th August 1824” made by Clews sold for $2,673 (est. $300-$500).

Designs featuring founding father George Washington were equally popular. One of the highest prices in the sale was realized for a pearlware plate with bust of Washington and the Great Seal sold for $8,295 (est. $1,500-$2,500). Clews produced a pattern labeled on the front “America and Independence,” which featured a bust of Washington and the names of fifteen states in a surrounding border. A platter, 17 inches by 14 inches, with the design was a good buy at $1,778. The entire catalog can be viewed online at www.pookandpook.com and print copies are still available from the auction house.

After the auction, Jamie Shearer, Pook & Pook vice president and American decorative arts specialist, commented, “Anything that was special or in excellent condition, private buyers were adding those to their collection and were willing to pay extra for those lots. The color is so vivid and bright.”

He also emphasized the breadth of this collection: “Goldberg was not focused on any one series. If it was blue and he didn’t have that form or pattern, that was what he bought.” The catalog opens with a tribute and brief history of the collection. Hayden Goldberg purchased his first piece of historical blue Staffordshire in 1963, a good time to be buying in the field.

Asked what means most to collectors today, Shearer noted, “In today’s world, most advanced collectors are more condition-oriented because they have access to so much more through the Internet. In the past, you might see 50 pieces at shows and auctions in a year. Now you can see 50 pieces in any given hour. So now with that access, people feel they can wait for an example in excellent condition.”

At Winterthur, Grigsby is spreading the word about the online exhibition “Patriotic America,” which can be accessed through www.winterthur.org or at www.americanhistoricalstaffordshire.com. The introduction explains: “Patriotic America offers a comprehensive set of images of America in the 1820s, documenting a time of great celebration in the country. In 1815, when trade between America and England resumed following the War of 1812, Staffordshire potters were eager to regain access to one of their most lucrative markets. This virtual exhibition brings together the production of more than twelve British potters who created an aesthetic that would be desirable to Americans eager to purchase objects highlighting their growing nation. Many of the images were inspired by paintings and engravings depicting the new nation’s remarkable landscape and notable architecture. Succeeding generations have treasured these wares, and they survive as a testament to the skills of the Staffordshire potter and the patriotism of his American consumer.”

The exhibition was a joint project of Winterthur, the Transferware Collectors Club, and Historic New England. Collectors can mark their calendars—the Transferware Collectors Club will be coming to Winterthur on Oct. 17, 2014 as part of their annual conference, which will be held in Pennsylvania next year. For more information on the organization’s activities and history of transfer-printed Staffordshire wares, visit www.transcollectorsclub.org. 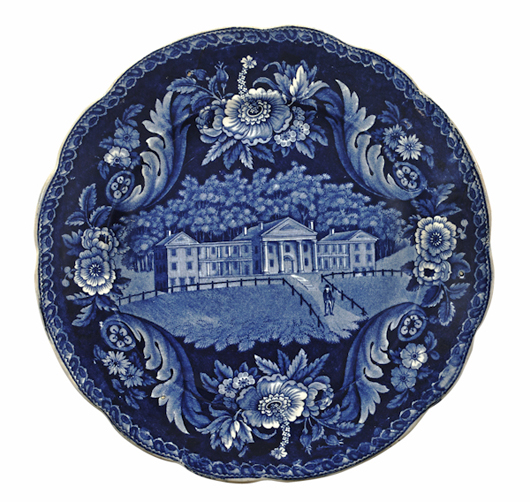 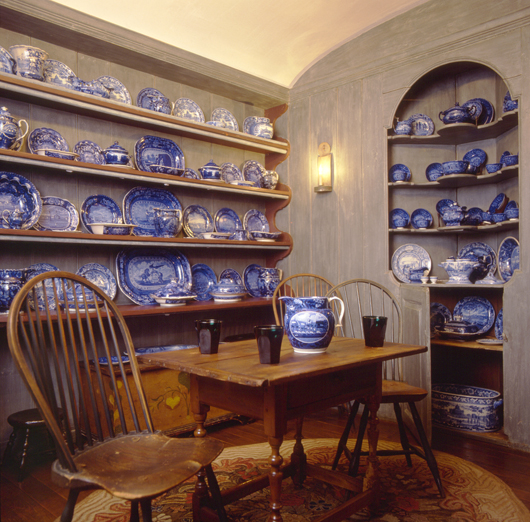 Henry Francis du Pont was an enthusiastic collector of transfer-printed American views, which he used to create this impressive display in the Blue Staffordshire Room at Winterthur. Courtesy, Winterthur; photo by Lizzie Himmel. 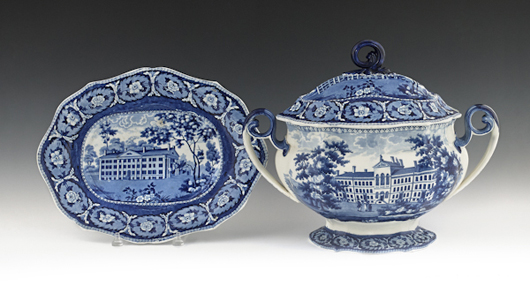 Large tureens remain the show-stoppers of any set of dishes. This example stamped J. & W. Ridgway, which features views of the Alms House Boston and the Deaf and Dumb Asylum Hartford, sold in October at Pook & Pook for $5,214. Courtesy Pook & Pook. 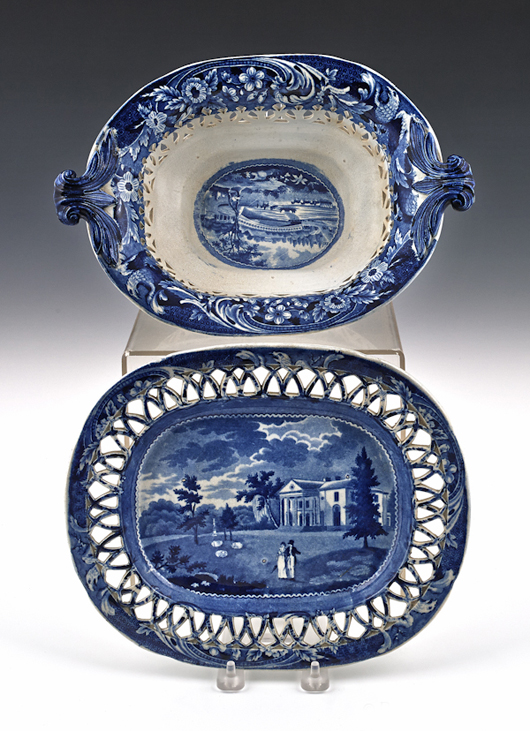 Reticulated baskets with lacy cutout borders are another desirable form. Decorated with scenes of the Upper Ferry Bridge over River Schuylkill and Woodlands near Philadelphia, this example brought $9,480 (est. $1,500-$2,500). Courtesy Pook & Pook. 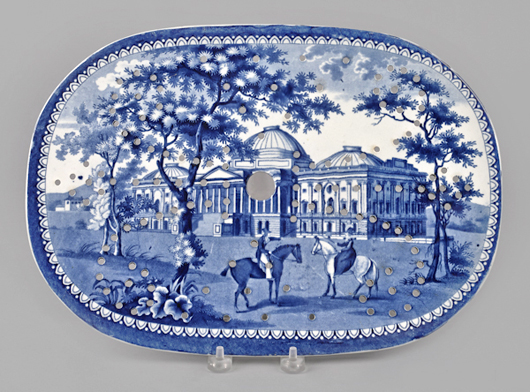 Part of the Beauties of America series by J. & W Ridgway, this strainer for a platter features a desirable early view of the Capitol in Washington, which brought $3.081 (est. $800-$1.200). Courtesy Pook & Pook. 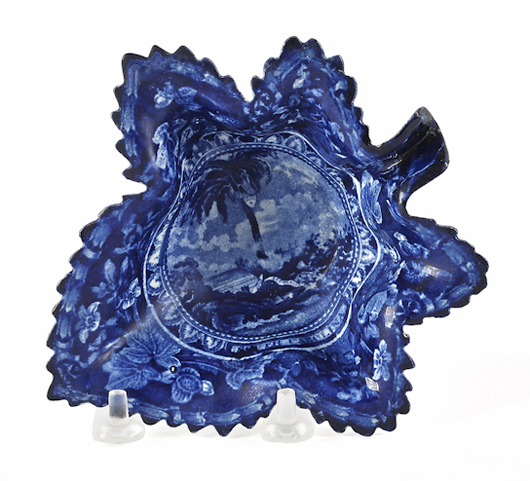 The Staffordshire firm of Thomas Mayer produced a series featuring the arms of the American states. This attractive leaf-shaped serving dish with the Arms of South Carolina sold for $3,081 (est. $1,000-$1,500). Courtesy Pook & Pook. 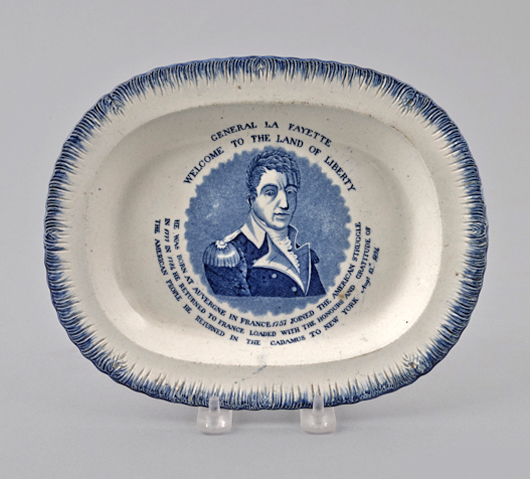 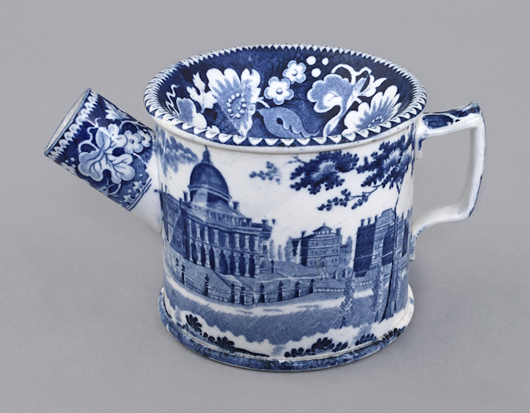 The Boston State House pattern was a favorite in the Goldberg-Brown collection. The same dignified scenes were applied to tableware and personal items such as wash sets, and this diminutive ladies’ spittoon, which brought $7,110 (est. $1,200-1,800). Courtesy Pook & Pook.