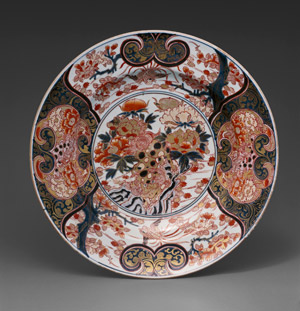 This large 17th century Japanese Imari plate – over 21 inches in diameter – is decorated in underglaze blue and overglaze enamels. The central medallion is decorated with a stylized lion and peonies. Image courtesy Seattle Art Museum.

For ceramics collectors, Imari is a porcelain, a palette, and a passion. The style gets its name from the town of Imari on the coast of Japan’s largest island, Kyushu, which served as the primary shipping port for porcelain made in the nearby city of Arita.

The Porcelain Room of the Seattle Art Museum is a key location for viewing Japanese Imari and its many imitators. The walls are lined with 1000 pieces of Asian and European porcelain from the museum’s permanent collection. In Porcelain Stories from China to Europe, SAM Curator of Decorative Arts Julie Emerson explains, “Imari style refers to a type of decoration developed in Arita in the last two decades of the seventeenth century. It is characterized by its palette of underglaze cobalt blue and overglaze enamels of strong colors, such as iron red and gold.”

Beyond the glaze, decoration is equally distinctive. “Imari designs usually show auspicious symbols and stylized pictorial scenes,” Emerson notes. “The Imari-style wares, sometimes called ko-imari (old Imari), were made for both export and Japanese domestic markets throughout the eighteenth century. Like the Kakiemon palette, the Imari style was widely copied by European potters. The Chinese also created porcelain in the Imari style, almost exclusively for the export market.”

Emerson points out the origins of Imari style in a recent interview: “Early Imari was very much influenced by textile design in Japan. Of course, textiles were a huge way of dispersing ornamentation around the world and the porcelain came too.” A late 17th century plate in Seattle’s collection painted with a lion and peonies is a clear example of the “brocaded” style of decoration which closely resembles elaborate silk fabric designs.

In addition to the iron red and blue dominated Imari porcelain, the Japanese exported a number of other key styles. These included patterned dishes in basic blue and white, along with a decorative style called “Kakiemon.” This style features delicate floral designs on a white background.

The Chinese produced a mixture of styles for export, including their own traditional motifs along with wares copying Imari and Kakiemon styles. European buyers eagerly bought both Japanese and Chinese ceramics, which ranged from massive vases to tiny miniatures.

Imitations of Imari patterns soon emerged in Europe, some highly accurate, some more imaginative. Early examples can be found in tin-glazed Dutch Delft pottery, hard-paste porcelain from the Meissen works in Germany, and English soft-paste porcelain from factories such as Chelsea and Bow. In fact, an excellent reference documenting Japanese influence on period European porcelain is Porcelain for Palaces: The Fashion for Japan in Europe, 1650-1750 by John Ayers, Oliver Impey, and J.V.G. Mallet.

The influential 18th century porcelain collection of Augustus the Strong, the Elector of Saxony, receives notable coverage in Porcelain for Palaces. His enthusiasm for Japanese and Chinese porcelain knew no bounds, and like many serious collectors, he had to create a new exhibition space to display what he had amassed. The Japanese Palace, built between 1729 and 1737, showed off the objects floor to ceiling, in a fashion that must have overwhelmed the visitor. The collection has survived intervening centuries of war and disruption and can be seen in Dresden today.

Leslie Grigsby, Curator of Ceramics at the Winterthur Museum in Delaware, points out that Imari style has been interpreted in various ways throughout history: “If you want to do a real simple timeline, in the years around 1700, western imitations of Chinese Imari tended to be fairly slavishly accurate. As the 18th century moved on, you start getting a little more adventurousness on the part of the Western imitators. This varies according to the skills of the factory and the market they are trying to appeal to. By the time you get to around 1800, you get more and more imagination coming into it.”

Through auctions and antique shows, collectors have access to brilliant Imari design in all its permutations from the earliest Japanese and Chinese porcelains through centuries of inspired copies. A personal favorite are the fanciful “Japan” patterns which decorated table services made by many English potteries (Worcester, Derby, Coalport, and Spode) in the first half of the 19th century. With many pieces available in the $100-$800 range, this English Imari brings a burst of color to any interior.

Karla Klein Albertson began her journalism career with an eye on antiquities, after receiving her master of arts degree in Classical Archaeology from Bryn Mawr College. For the past 10 years, she has written the Antiques column for the Home and Design section of the Philadelphia Inquirer. She contributes regularly to Maine Antique Digest, Early American Life and other trade and collector publications. Decades of pop culture have made an impact as well, sparking an interest in rock music history, Silver Age comics, martial arts, movie memorabilia and surf/skate/snowboard culture.