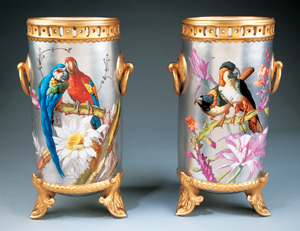 This pair of cylindrical ceramic vases with elaborate polychrome decoration brought $11,456 at Neal Auction Company in New Orleans in 2007. Adding to their value was an inscription on the base: “S. Child & Co., Baltimore, Exposition Universelle Paris 1878.” Courtesy Neal Auction Company

PHILADELPHIA – Beginning in the 19th century, international world’s fairs presented cutting-edge fashions in art and design. Before the rise of the cinema or the widespread use of photography, fairs were literally a window on the world for the visitors who filled the aisles.

Fanciful buildings held displays which presented the latest achievements in technology, cultural artifacts from distant countries, and fine and decorative arts. In the latter category, companies and individual artisans competed for prizes which could assure future success in the marketplace.

A new exhibition, Inventing the Modern World: Decorative Arts at the World’s Fairs 1851-1939, explores the influence these events exerted on the public’s aesthetic perception. Organized by the Nelson-Atkins Museum of Art in Kansas City and the Carnegie Museum of Art in Pittsburgh, the show will travel to museums throughout the country during the next two years.

The exhibition catalogue for Inventing the Modern World, edited by Catherine L. Futter and Jason T. Busch of the organizing institutions, is an essential reference for all collectors of decorative arts. The pages are filled with examples of the ceramics, glass, silver, textiles, and furniture that greeted visitors to the fairs.

The volume published by Skira/Rizzoli will be on sale at museum stores and is available online for around $50. In addition to scholarly essays, the book contains valuable appendices on the chronology of the events and exhibiting firms and designers.

In a recent interview, Catherine Futter, the Uhlmann Curator of Decorative Arts at the Nelson-Atkins, voiced her goals: “I want people to realize the scope of what was there, and how exciting it was to encounter these objects which were technically and stylistically innovative. World’s fairs transmitted ideas. Although there was competition, the goal was to create a better world.”

The Great Exhibition of the Works of Industry held in London in 1851 – often referred to as the Crystal Palace Exhibition – is regarded as the opening salvo in a string of international events held in North and South America, Europe, and the Far East during the following century. The massive building constructed of iron girders and glass plates was a wonder in itself. Period prints show well-dressed Victorians strolling along interior streets with store-front windows displaying products from many nations.

While London continued to offer exhibitions during the latter half of the 19th century, fashion-conscious Paris stepped up with a series of Expositions Universelles in 1867, 1878, 1889, and 1900. The famous 1925 Paris Exposition Internationale des Arts Decoratifs popularized Art Deco and changed the course of art history. Fairs eventually spanned the globe – Vienna 1873, Cape Town 1877, Melbourne 1880, Madrid 1892, Stockholm 1897, and even Hanoi 1902 among many others.

On this side of the Atlantic, Americans enjoyed multiple events including the Philadelphia International Centennial Exhibition in 1876, the Chicago World’s Columbian Exposition of 1893, the “Meet Me in St. Louis” Louisiana Purchase International Exposition of 1904, and the famously futuristic New York World’s Fair of 1939.

After years of research into these events, Catherine Futter said, “In the decorative arts, one of my major interests is examining where cultures come together and the transference of ideas. One of my specialties is chinoiserie and japonisme. I’m especially interested in the effect of Asian culture on western art but also in the effect of western culture on Asian art, and of course the world’s fairs were a huge catalyst for that.” Her essay in the exhibition catalogue is titled “’The Federation of Mankind’: Cross-cultural Influences in Decorative Arts at the World’s Fairs.”

One of the best examples of world’s fairs setting a style for decorative arts and interior design is the impact that viewing Japanese artifacts had on the West. Many visitors had never seen art or even a living person from Japan before, and suddenly everyone wanted a vase with Japanese motifs or a “japonesque” cabinet. Put in modern terms, the viewers were simply “blown away” by the style.

In the catalogue, Futter writes: “At the 1876 Centennial International Exhibition in Philadelphia, not only did Japanese manufacturers participate with a pavilion, bazaar, and garden, but also a variety of European and American manufacturers showed Japanese-influenced designs in every medium.”

The Atlantic Monthly review effusively exclaimed, “The gorgeousness of specimens is equaled only by their exquisite delicacy…. After the Japanese collection everything looks in a measure commonplace, almost vulgar.” The style was so popular in the West that Gilbert and Sullivan’s 1885 operetta The Mikado, set in an imaginary Japanese court, became their longest-running hit.

The world’s fairs had a major impact on decorative arts collecting from the very beginning. Today bidders will pay a premium for objects with a documented history of exhibition at a particular event, even more if the object in question won a medal for excellence. Private collectors often must compete directly with museum curators who want to acquire the same lots.

Catherine Futter, who has acquired choice pieces for the museums where she has been curator, noted that this competition has a long history. Many exhibits at the fairs were for sale at various price points and went home with visitors. Meanwhile, institutions were buying entire displays for their permanent collections.

The curator said, “In Europe, design and decorative arts museums acquired massive numbers of objects at the fairs. The Germanisches Nationalmuseum in Nuremberg acquired 1750 objects from the Vienna 1873 fair. In 1900, the Danish Design Museum bought an incredible collection of objects at the Paris fair. The museums went shopping for things.”

“A lot of these applied arts museums were affiliated with schools, so it was a way to train students and educate manufacturers and designers and finally to show the public what good design was. World’s Fairs were all about education and, of course, design museums and their schools shared that goal.”

She continued, “The Victoria & Albert Museum comes out of the 1851 exhibition. In this country, there were quite a number of objects purchased from the Philadelphia 1876 exhibition, both for what became the Philadelphia Museum of Art and the Smithsonian.”

For views of the site plans and fantastic architecture of these extraordinary events, World’s Fairs by Eric Mattie, published by the Princeton Architectural Press, is the authoritative study. Travelers can visit surviving structures around the world. For example, the Palace of Fine Arts from the 1904 Louisiana Purchase Exposition is now the St. Louis Art Museum.

Inventing the Modern World continues at the Nelson-Atkins Museum in Kansas City through August 19. The show travels next to the Carnegie Museum of Art in Pittsburgh for a October 13, 2012-Febrary 24, 2013 run, followed by visits to the New Orleans Museum of Art and The Mint Museum in Charlotte, N.C. in 2013. 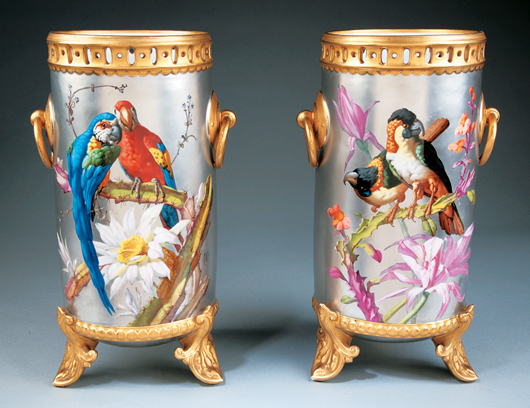 This pair of cylindrical ceramic vases with elaborate polychrome decoration brought $11,456 at Neal Auction Company in New Orleans in 2007. Adding to their value was an inscription on the base: “S. Child & Co., Baltimore, Exposition Universelle Paris 1878.” Courtesy Neal Auction Company 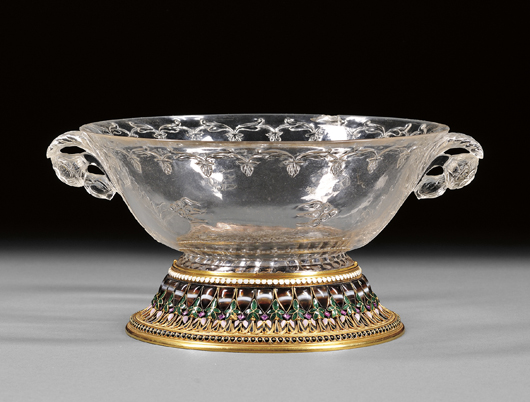 London goldsmith Robert Phillips made exquisite gold mountings for antique Mughal carved rock crystal bowls; this example sold at Skinner’s last October for $201,450. Phillips exhibited at the 1867 Paris Exposition Universelle, and this object may have been part of his display there. Courtesy Skinner Inc. 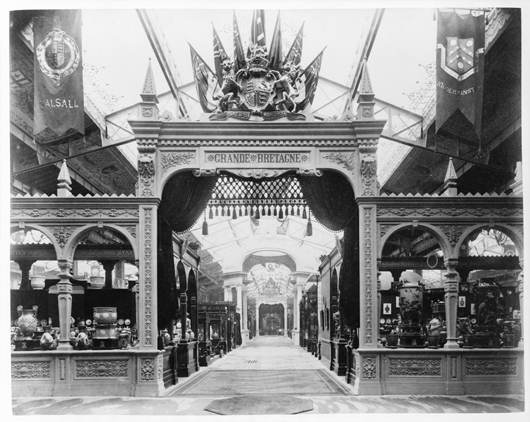 A period photograph of the entrance to Great Britain’s display at the 1889 Paris Exposition Universelle illustrates how decorative arts were presented to the public. New design trends were set, as both private buyers and institutions purchased objects that caught their fancy. 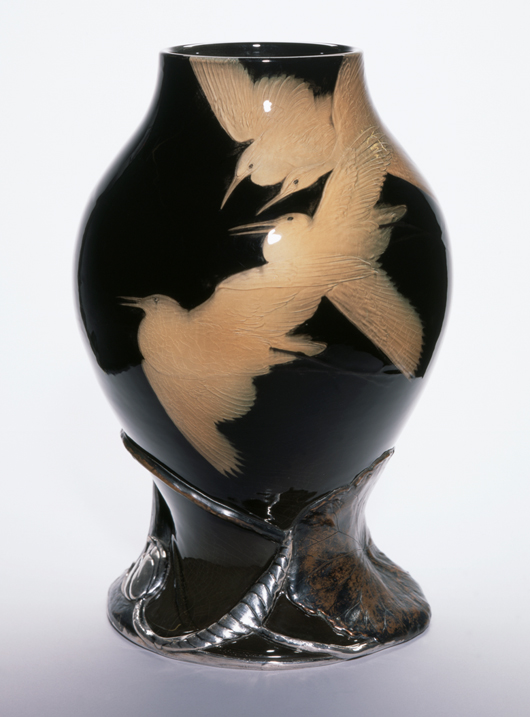 Among the objects on display in Inventing the Modern World is this Rookwood Pottery vase decorated by Kataro Shirayamadani (1865–1948), which was exhibited at the 1900 Paris Exposition Universelle. The Japanese-born artist was superbly qualified to satisfy the popular demand for decorative arts influenced by Asian styles. Courtesy Cincinnati Art Museum 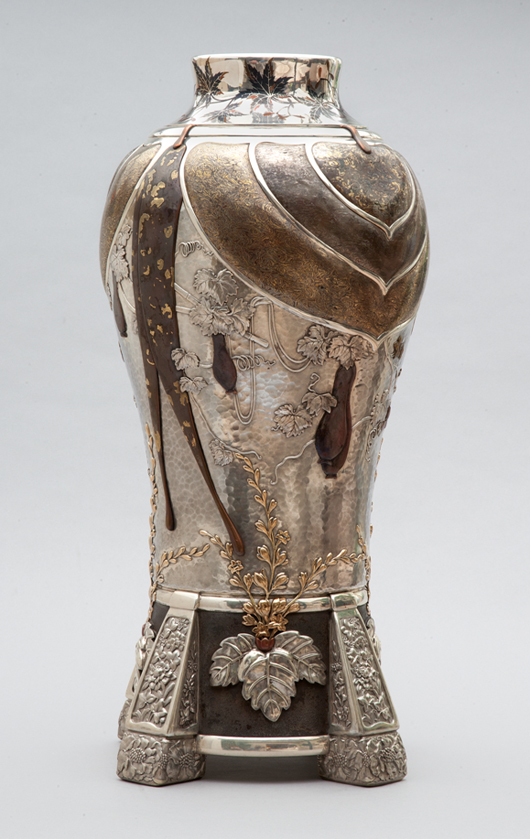 Tiffany & Company was quick to adopt exotic techniques and designs first viewed by the public at world’s fairs. This silver vase with copper, gold, iron and niello from the 1878 Paris Exposition Universelle displays strong Japanese influence; the loan from a private collection is part of Inventing the Modern World. 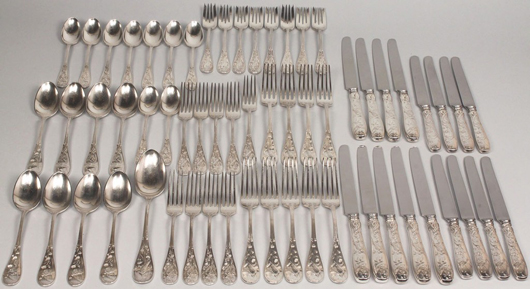 Antiques influenced late 19th century fashion for japonisme, which was fueled by world’s fairs, frequently come up at auction. In February, Case Auctions in Knoxville sold this 61-piece set of Tiffany “Audubon” pattern silver flatware for $9,512 over a $4500-6500 estimate. Courtesy Case Auctions