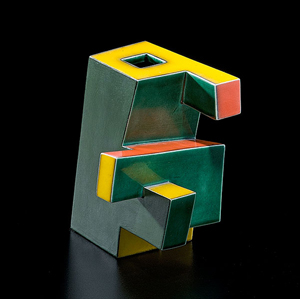 Ceramics are sometimes relegated to that artistic stepchild, the “crafts” category. But no one has ever suggested that the work of Ken Price (1935-2012) is anything other than fine art, even though his miniaturized sculptures can be held in one hand.

A new traveling retrospective exhibition, organized by the Los Angeles County Museum of Art and designed by architect Frank O. Gehry, displays works from every twist and turn of Price’s career. Most valuable for enthusiasts is the accompanying 288-page catalog with magnificent images and essays by LACMA Senior Curator of Modern Art Stephanie Barron, Frank Gehry, Phyllis Tuchman and Dave Hickey, as well as past interviews with the artist himself.

In his review of the exhibition for Crafts magazine in London, ceramics expert Garth Clark wrote: “Ken Price Sculpture: A Retrospective is kiln hot, blazing with color with works that glow like embers plucked from the fire and forms that emulate the flow of molten lava. It is a pyrotechnic display that is shockingly beautiful for those who do not already know the work, an affirmation for those who do. However, brightly as this retrospective glows, it has taken Price his entire career to reach this point, his coronation as a great American artist. Alas, he died four months earlier at age 77.”

A Los Angeles native, Ken Price received a B.F.A. in 1956 from the University of Southern California and a M.F.A. in 1959 from the renowned New York State College of Ceramics at Alfred University. He divided his long working career between Venice, Calif., and Taos, N.M., producing some of his most celebrated pieces in the 21st century near the end of his life.

While some Alfred graduates are classed as studio potters or even just creative tableware makers, Price entered the art world at a high level. Clark pointed out, “Though one will not find an artist more dedicated to his core medium, this is not the craft-rags to art-riches scenario. Price lived his entire career in the fine arts. …”

“His first solo show was at Irving Blum’s legendary Ferus Gallery, Los Angeles in 1960, joining a stable of his surfing buddies and friends: Billy Al Bengston, Ed Ruscha, Craig Kauffman, Ed Keinholz, and others. He was also introduced to the New York artists Blum showed: Ellsworth Kelly, Jasper Johns, Roy Lichtenstein and Andy Warhol (whose first solo exhibition was at Ferus). This was, and remained, Price’s milieu.”

Clark wrote the extensive catalog entry when the Cowans+Clark+DelVecchio ceramics auction sold a Price Geometric Cup in November 2011 for $114,562.50. Confident in his status as a sculptor, Price was fascinated by the cup form, taking a ceramics standby and turning it on its head. He had ventured into this design area in the 1960s, but the series of strongly geometric cup shapes he created after moving his family to Taos in the early 1970s has become his most sought-after works. Examples rarely come up for sale, so the strong Cowan’s result came as no surprise; one offered at Sotheby’s in 2006 brought over $200,000.

Happy’s Curios – named after his wife Happy – was another series executed during his time in Taos (1972-1977). These colorful objects, inspired by Mexican folk art ceramics, can be more affordable for collectors. Three subtly colored tequila cups from this group sold for $4,880 at a Rago auction in 2010.

From 1991-2001, Ken Price returned to USC as professor of ceramics. The flat planes of earlier geometric pieces gave way to oozing, amorphous blobs with layered colors, which rose a foot or two off the base surface. The shapes made Catherine Wagley title her Oct. 8, 2012 exhibition review in LA Weekly: “Why are Ken Price’s Oddball Sculptures at LACMA So Compelling?”

She wrote, “But Price, who in the late 1950s fell in with the Ferus Gallery crowd now known as L.A.’s first art avant-garde, was making strange, sexy, alienlike sculptures in the last two decades of his career, forms as visceral and memorable as anything he’d done before. Hunchback of Venice (2000) has a wonky, curved, orange-on-green back and fluorescent purple underbelly you have to lean over to see. OG (2008) is a roly-poly amalgam of breastlike protrusions.”

She explained the creation process: “Price would build up clay forms like these, firing them up to 20 times each. He had stopped using glaze in the 1980s and would instead paint the surfaces with layer upon layer of acrylic before working back into the color with rubbing alcohol or wet sandpaper, making it look as if paint had eroded in places. Finally, with a Q-tip, he would add new, bright colors into those eroded spots, giving his sculptures meticulously mottled, multicolored skins.”

One only need look at Balls Congo, the 2003 work illustrated here, to understand the effect these later works have on the viewer. The speckled creature seems to rise on multiple legs in preparation for a slither across the table. These works also bring substantial prices. Last year at Phillips, Blind Bob 1998 sold for $80,500 in November and Steeps 2004 brought $98,500 in June.

Having finished its 2012 run at LACMA, “Ken Price Sculpture: A Retrospective” begins a national tour with stops at the Nasher Sculpture Center in Dallas, Feb. 9-May 12, and the Metropolitan Museum of Art in New York, June 18-Sept. 22. 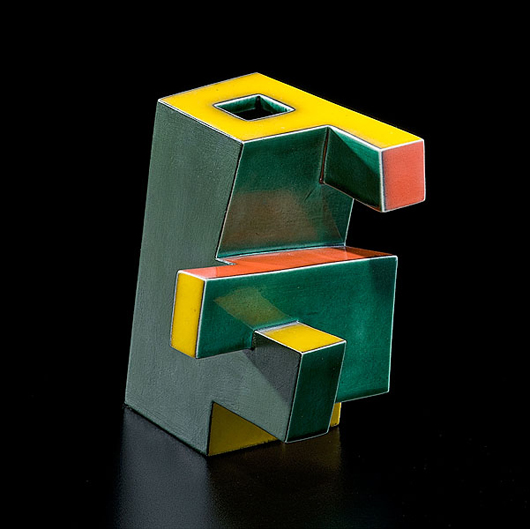 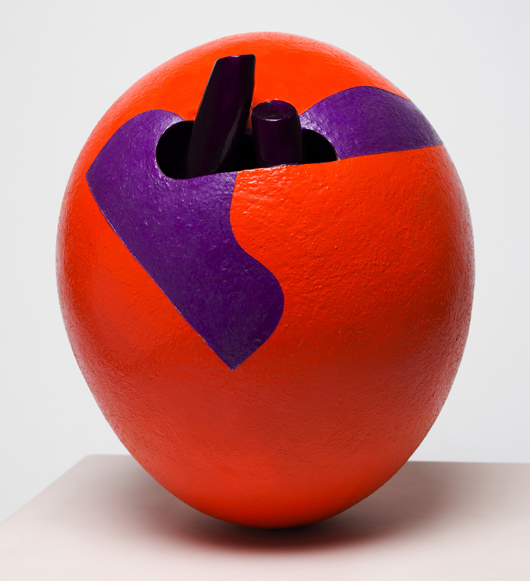 L. Red, a 1963 ceramic ovoid form painted with lacquer and acrylic, is one of 100 works in the traveling exhibition ‘Ken Price Sculpture: A Retrospective,’ organized by the Los Angeles County Museum of Art. This 13-inch-high work is on loan from the San Francisco Museum of Modern Art. Courtesy LACMA; photo Fredrik Nilsen. 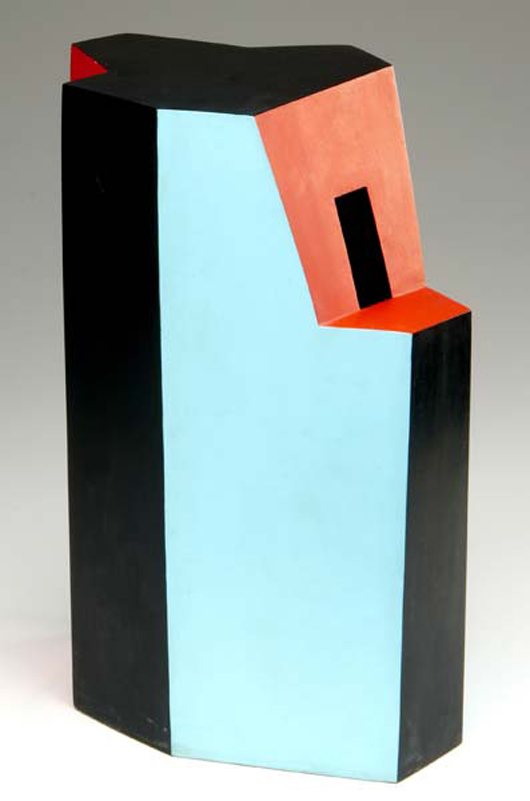 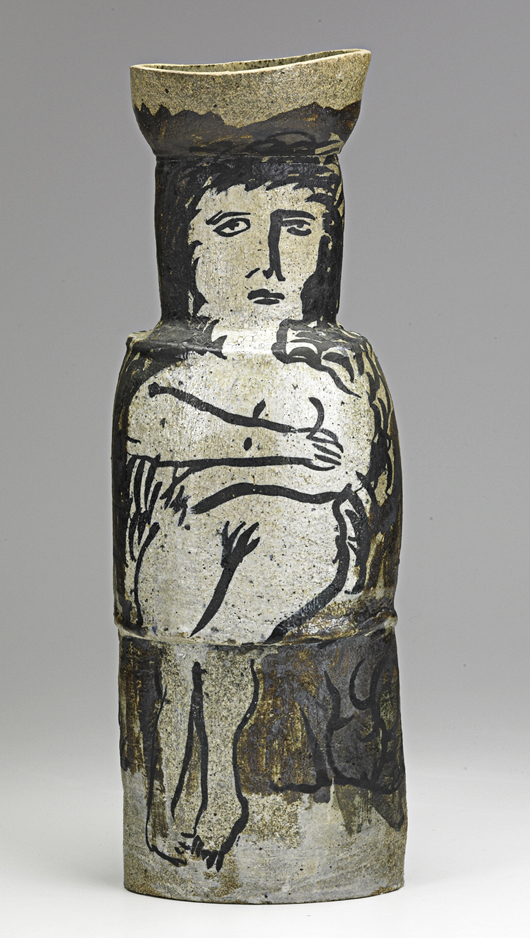 In the 1970s Price made a ceramic series inspired by Mexican folk pottery, which he called Happy’s Curios after his wife. These three subtly colored tequila cups brought $4,880 at a Rago auction in 2010. Courtesy Rago Arts and Auction Center. 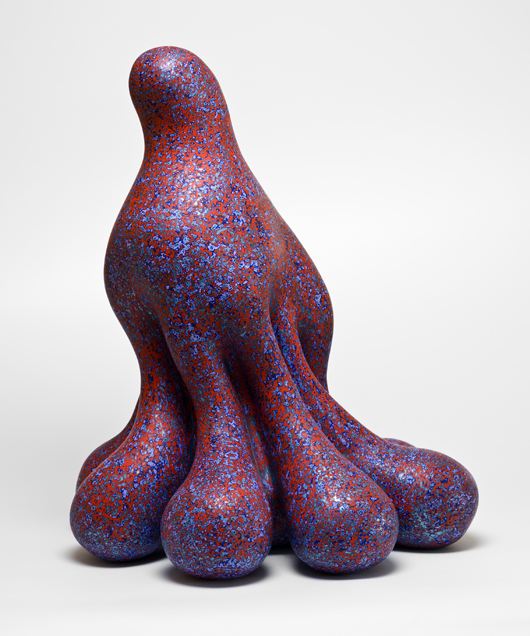