Bright as flowers in a meadow, many of Cabat’s glaze colors are unique to her pottery. Vivid lapis and lavender alternates with subtle shades of cream. Courtesy Bruce Block.

While some modern studio pottery is intellectual or even angst-ridden, the work of Rose Cabat (b. 1914) expresses pure joy in its design and decoration. The rounded thin-walled vases, thrown on the wheel, are covered with vivid glazes that mimic the best hues from the natural world.

“Her vases are all about the uniqueness of the shape and the glaze,” said Don Treadway of Treadway Gallery in Cincinnati. “They’re aptly called ‘feelies’ because they are so inviting to actually touch. They transcend normal pottery collectors and appeal to people who just collect objects.”

David Rago chose Cabat as the subject for the final pottery essay in the book, Collecting Modern (2001). “Rose Cabat seems the perfect artist to close this discussion because her work embodies a most important segment of mid-century decorative ceramics,” he wrote. “Her vision is personal, exceptionally refined through relentless experimentation, and her art is ultimately affordable. A generous evaluation would confirm that she distinguished herself by bringing beauty and craftsmanship into the realm of the discerning collector with average means.”

Cabat’s pottery is on display in the permanent collections of major museums. Exceptional pieces can bring five figures at auction. But the good news for collectors is that many colorful objects from her wheel can be purchased for $500 or less in sales of modern decorative arts.

Be warned – like the best bonbons in the world – it would be very difficult to have just one Cabat vase. The glaze shades contrast and collaborate when displayed in a group, and the joy compounds exponentially as a collection grows.

While Cabat has also thrown some flaring bowls and made vases with relief designs early in her career, her signature form is the feelie – a round smooth-sided vase covered with a touchable glaze. The shapes range from almost spherical to pear-shaped or teardrop-shaped; some have a shoulder. All conclude in an impossibly thin, fragile neck with a tiny opening. As Treadway notes above, these are more sculptural objects than vessels.

When seeing Cabat’s feelies in person for the first time, the greatest surprise is their diminutive size. Most are less than 5 inches, and a large vase from her hand would be around 12 inches high. The size and curvature make the urge to cradle the vases in the palm of one’s hand almost irresistible.

Rose was born in Brooklyn in 1914 and married Erni Cabat, a fellow artist who – although not a potter – encouraged and supported her work. The Cabats moved to their permanent home in Tucson, Ariz., in 1942. There she acquired a potter’s wheel and began to throw her first vases.

David Rago wrote, “Through years of work and experimentation, she eventually developed her feelie vases, a series of mostly small, globular vessels with trimmed foot rings and pinched, nipple-like closed rims, offered in a rainbow of fine, satiny glazes.”

Any discussion of Cabat’s work involved color as well as shape. She took a glazing class at the University of Hawaii in the 1950s. Anyone can take a course, but few could come up with the results that Rose Cabat achieved.

Rago continued in his essay, “While these pots work well in many ways, the handsome glazing in and of itself is simply beautiful. Some of the glazes Cabat employs are interesting because they are unique to her work alone.”

Blue lapis is everywhere, but Rago also cites onionskin, malachite, apple green, fruit skin, lavender, mauve and cream. Shades of complimentary or contrasting color merge on the walls of individual pieces. Not only are the glaze colors unique, the combinations astound as well.

New York dealer Bruce Block has visited Rose Cabat many times and reports that – even though now in a wheelchair – she still throws pots on the wheel, a living legend indeed. He points out that women were first decorators for the shapes men potted and then slowly made the transition to making pieces themselves: “Women becoming potters seems to coincide with the beginning of the women’s rights movement, with our changing ideas about ‘what women do.'”

Block said in conclusion, “On one level she is a little Jewish lady from the Lower East Side. On another level, she is this quiet genius. She embodies both those things – pottery is her life. There’s something about her work that makes it the most captivating pottery I know. When I sell her vases, people who know nothing about pottery will stop by my display and ask, what are those? It’s a combination of the color and the form.” 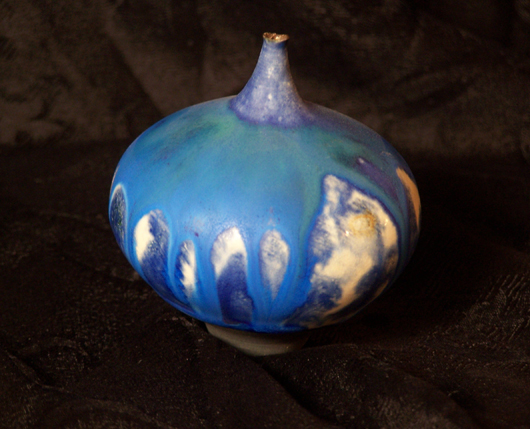 Glazes in strong shades of blue were often used by the Cabats on Rose’s rounded vases. Courtesy Bruce Block. 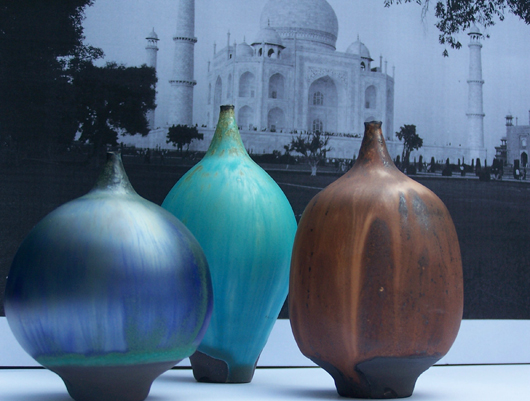 This group of three vases displays the subtle variations in curvature on Cabat’s feelies. The golden-brown example at right shows off the potter’s onionskin glaze. Courtesy Bruce Block. 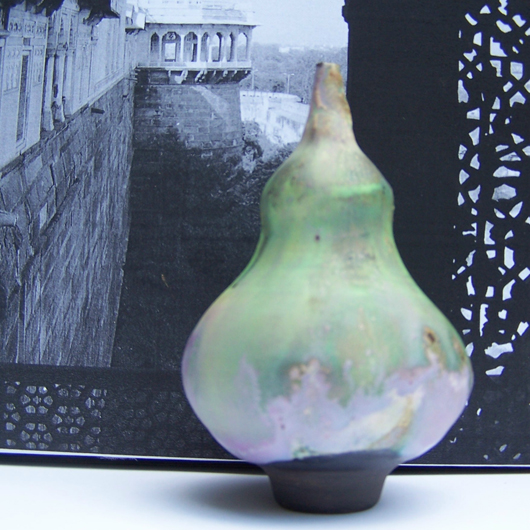 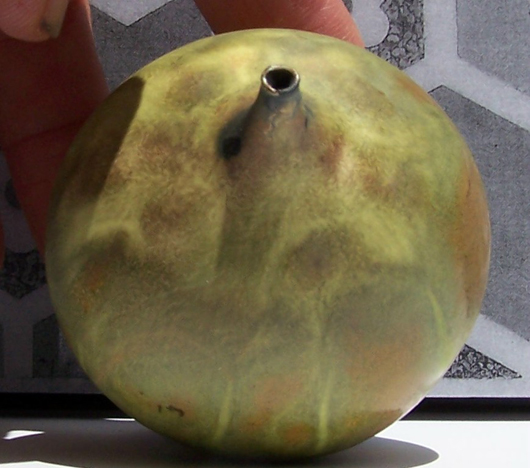 More sculpture than vessel, a typical Rose Cabat vase swells in the middle, then narrows to an extremely small opening at the top. Courtesy Bruce Block.