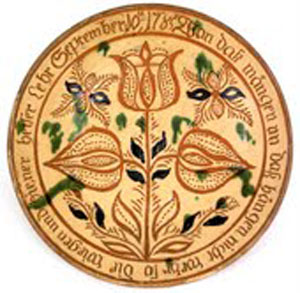 This redware dish, attributed to George Hubener, has all the bells and whistles collectors want. The bold sgraffito tulip design on a yellow ground is accented with green splotches, and the German inscription includes the date 178. The example, similar to one in the Winterthur collection, sold at Pook & Pook in January 2008 for $351,000, a redware record. Image courtesy of Pook & Pook.

Passionate collectors draw inspiration from exhibitions focused on their special field. For anyone enthused about American redware, “Seeing Red: Southeastern Pennsylvania Earthenware from Winterthur” will be a delight.

The show at the Brandywine River Museum through July 24 displays 50 treasures from the famous collection formed by Henry Francis du Pont. A visit to the Chadds Ford, Pa., institution can be coordinated with a journey to Winterthur itself across the line in Delaware, where the landmark exhibition “Paint, Pattern & People: Furniture of Southeastern Pennsylvania, 1725-1840,” will be until Jan. 8, 2012.

Redware collecting has fared well over the years, with examples increasing in value, because the pottery has vivid colors, intricate patterns and interesting forms, which enhance contemporary settings as well as period interiors.

Almost 30 years ago, pottery expert William C. Ketchum Jr. wrote in his classic book on Pottery & Porcelain (one of the Knopf Collectors’ Guides to American Antiques): “The earliest redware potteries were established in New England, Pennsylvania and along the Mid-Atlantic coast. the shops were small, typically run by one or two men who threw their wares by hand on a wheel.”

He continued, “Most redware vessels were utilitarian – crocks, jugs, jars, plates, platters and mugs – and were intended for everyday use. Yet some potters embellished their wares, and today these decorated pieces are among the most highly esteemed of American pottery.”

Flourishing in the 18th and 19th centuries, redware workshops were making what was needed for local communities from the materials at hand. Yet the potters excised so much creativity that the best redware has long been enshrined as folk art. The term “art pottery” would not be used until the end of the 19th century, but this pottery can certainly be appreciated as art.

Catharine Dann Roeber, who has been working a major ceramics cataloging project at Winterthur, was the guest curator for the Brandywine exhibition. She had the enjoyable task of selecting objects for display from Winterthur’s legendary collection.

She notes, “When this project arose it was wonderful to bring things out of those hidden corners.” The depth of the collection is a testimonial to du Pont’s passion for folk wares in general and ceramics in particular.

“The guiding principle for choosing the objects was to emphasize the diversity of makers and users in southeastern Pennsylvania and also to pick well-attributed examples,” Roeber notes. “We wanted to use pieces that we were fairly confident were made in the region.”

In an essay written for the exhibition, the curator explains the diversity of decoration: “Redware objects were often decorated by stamping, stenciling, scratching, incising, piercing, rouletting or slip-decorating … Glazes served a two-fold purpose. They added color to the object while simultaneously making the vessel impervious to liquid.”

An important masterwork on display, one circular dish has an incised decoration of a peacock and flowers. The sgraffito technique cuts through the yellow slip on the surface to reveal the red body of the clay beneath. Splotches of green glaze add color, and there is an early date – 1787 – and an inscription in German on the rim which reads: “Were there no men or roosters, the cradles and chicken houses would be empty.” The work is attributed to potter George Hubener of Montgomery County.

When selecting examples for the show, Roeber says, “We wanted to show the full range. Some of them were made to be completely useful day-to-day objects – for example, a roof tile or a plain inkwell. But then there were pieces that had a function but were intended as special objects when they were made.”

The addition of names, dates, and inscriptions to some redware pieces strongly suggests that they were made as gifts to mark special occasions. Another highlight in the exhibition is a teapot dated 1799 with a German inscription: “God bless you all in food and drink.”Any personalization of this type is highly prized by collectors.

Roeber has some favorite exhibits: “We’ve got a great flowerpot that had applied molded dogs and birds all over the outside surface, and that one is actually signed by the maker. And I like the slip-decorated dish with three fish.”

Auctioneers Pook & Pook in Downingtown, Pa., have handled some of the best Pennsylvania redware sold in recent years. Ron Pook acknowledges, “It’s one of my favorite things actually. It’s so dramatic, so unique to this area – I love the material.”

Although there are certainly entry-level pieces in the $500-$1,000 range, the best pieces can bring five and six-figure bids at auction. Pook says, “Redware with sgraffito decoration is what brings the ultimate price, particularly with incised German inscriptions around the edges.” In January 2008, the firm sold a decorated dish attributed to potter George Hubener, that was very similar to the Winterthur one cited above, for $351,000 – a redware record.

Pook & Pook Vice President Jamie Shearer adds some further advice for collectors: “The main thing I recommend is, you should buy what you like. What appeals to one person may not appeal to somebody else. The bigger money pieces are obviously the sgraffito examples. But there is some really neat slip-decorated stuff that has been doing very, very well.

Shearer says in conclusion, “Redware has not gone out of fashion. When it comes to smalls and redware, there’s always a spot on the shelf or a plate rack where you can stand up a nice slip-decorated loaf dish. It doesn’t necessarily lend itself only to period furniture, it’s something that can fit in a modern setting.” 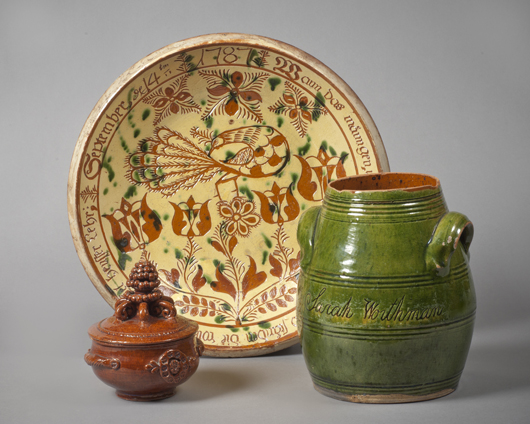 On view at the Brandywine River Museum through July 24, ‘Seeing Red: Southeastern Pennsylvania Earthenware from Winterthur’ displays 50 treasures from the famous collection formed by Henry Francis du Pont. Shown are a fancy covered bowl, 1780-1830; a decorated dish with inscription and the date 1787, attributed to George Hubener of Montgomery County; and a green-glazed jar reading ‘Sarah Worthman 1806.’ Photo Credit: Jim Schneck. 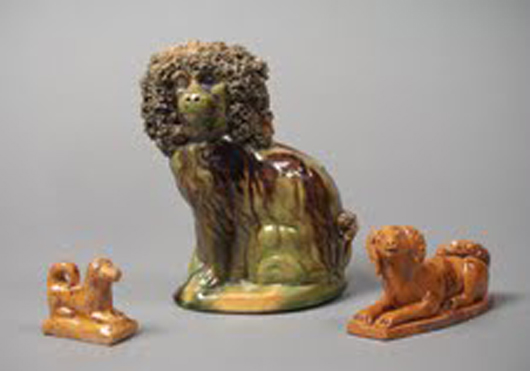 Collectors cherish unusual redware figures, birds and animals. The dog bank at center, one of the exhibits in ‘Seeing Red,’ is attributed to George Wagner of Carbon County, 1875-1900. Photo Credit: Jim Schneck. 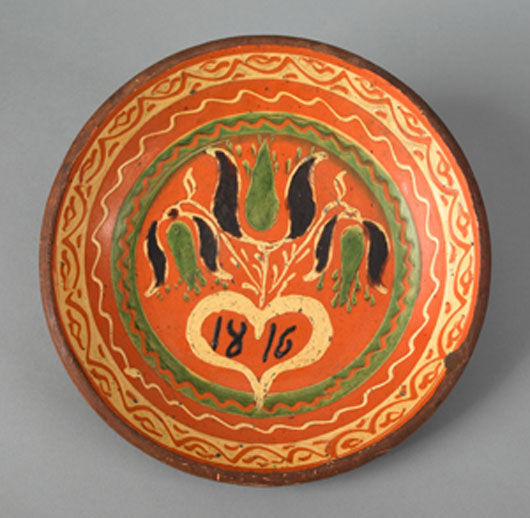 The bright colors, intricate patterns, and date add value to this round plate, but the clincher is the inclusion of a heart. The lot brought $105,300 in an April 2007 sale. Image courtesy of Pook & Pook. 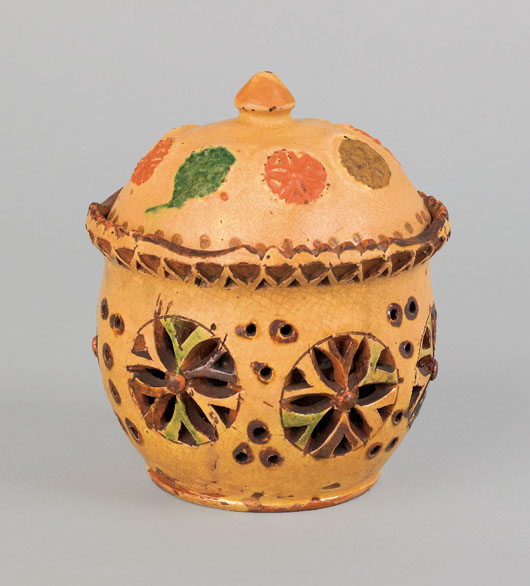 Rare forms, such as this sugar bowl complete with lid, are high on collectors’ wish lists. This example, attributed to Henry Grady of Somerset County, circa 1840, sold for $59,250 at auction last October. Image courtesy of Pook & Pook. 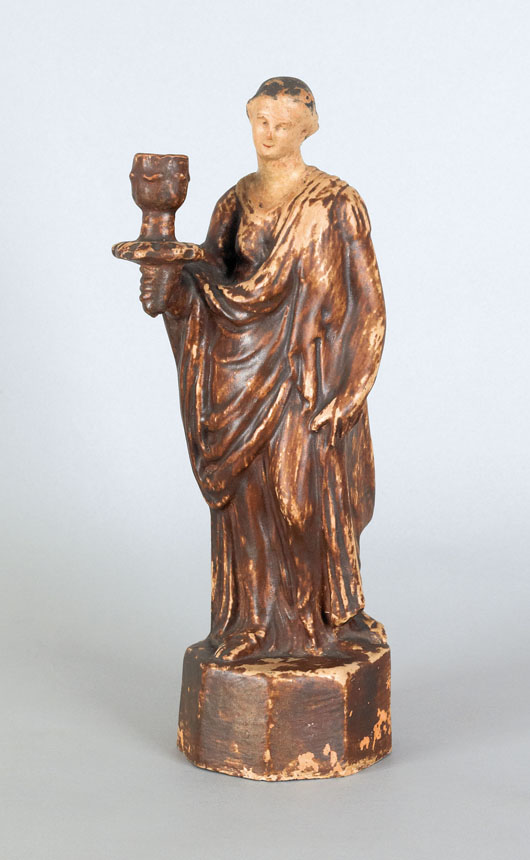 This redware candlestick in the form of a classically garbed woman is marked by the potter, Solomon Bell of Strasburg, Pa. The formal piece, influenced by fine ceramic figures from Europe, brought $23,700 last fall. Image courtesy of Pook & Pook. 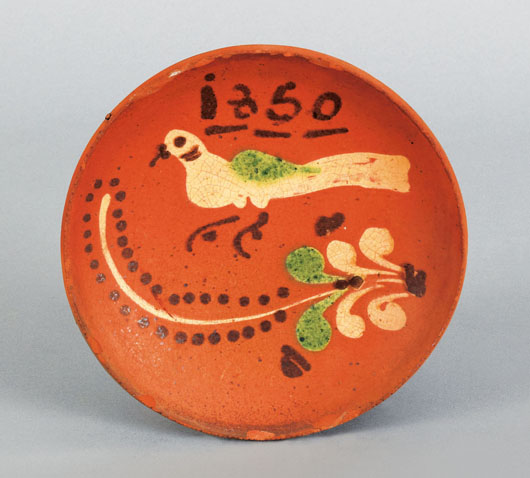 Collectors look for inventive designs on redware plates. This example, sold for $37,920 in 2010, offers a lively bird under the date 1850. Image courtesy of Pook & Pook.