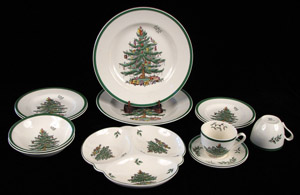 Partial services of Spode’s Christmas Tree pattern often appear at auction and can be augmented with additional pieces. The set shown with eight plates and cups and saucers sold for a reasonable $218.75 at Susanin’s; a larger set with 16 plates brought $500 there. Image courtesy Susanin’s Auctions, Chicago.

PHILADELPHIA – Buying pottery and porcelain at auction can be a serious, adrenaline-fueled competition.

For relaxation, choose a china pattern – not too hard to find – that the entire family will enjoy collecting. Seek it out in auctions, shows, and shops – then set the table for special occasions.

In the season to be jolly, Spode’s Christmas Tree is a perfect choice. The pattern dates back to the 1930s when Sydney Thompson, the firm’s agent in the United States, went to the parent pottery in England. He hoped to find a suitable holiday design in the pattern books that would appeal to his American customers.

Spode is one of the most distinguished names in British ceramics history. The firm was originally established at Stoke-on-Trent in Staffordshire by Josiah Spode I (1733-1797). His son Josiah II (1755-1827) continued to make artistic and technical innovations. The company was known for high quality bone china wares and transfer-printed pottery services, including ones in the famous “Italian” pattern that has been in continuous production since the early 19th century.

When he failed to find what he was looking for in the old pattern books, Thompson discussed a new design with Spode’s Art Director Thomas Hassall. He turned to designer Harold Holdway, later the firm’s Design Director, to come up with a pattern perfect for Christmas. After several attempts, Holdway created a distinctive decorated tree image with presents below and a Santa figure on top rather than the usual angel or star.

The original 10-inch plate has the wording “Wishing You a Merry Christmas 1938” on the reverse. Sydney Thompson went back home with his new pattern, which generated a flood of orders from customers who wanted to have a special service on the table for the holidays. Over the past 70 years, the design has appeared on a wide variety of plates, cups, serving pieces, and decorative items.

Collectors often begin by inheriting or purchasing a few pieces. Spode’s Christmas Tree is such an attractive pattern, many people continue to add dishes over the years until they have formed a service. Vintage pieces turn up at antique malls, while new items can still be found in gift shops or Spode’s online store.

Partial sets often come up at auction and can be augmented with appropriate items to serve personal entertainment requirements. Start with a group of six, eight, or ten plates and a platter. Serving tea, punch, or eggnog to a crowd? Add another dozen mugs.

A Christmas Tree service that was sold for $960 this November at Morton Kuehnert Auctioneers in Houston is a perfect example of an assembled family set. Not only were there twenty plates and over thirty cups, the group also included candleholders, salt and pepper shakers, tea and coffee pots, napkins rings, and ornaments. Any family can build a similar collection with online and shop purchases, and have an enormous amount of fun on the hunt.

If your decorating taste is more Mid-Century Modern, start a search for the hip Christmas tree- decorated pottery produced by the Glidden Pottery in Alfred, New York. The firm was in operation from 1940 to 1957, but the holiday design first appeared in ads in July 1953. A stylized tree on the cream-colored ware has a bright star on top and branches laden with colored balls and lights. Among the pieces offered were luncheon, salad, and canapé plates as well as a serving tray on metal stand.

Whatever the season, pattern hunting for 19th and 20th century dishes can become a consuming hobby. Anyone can buy a new set of dishes. Picking a great design from the past and gradually assembling a service is far more rewarding.

Rounding out inherited services to useful dimensions is a wonderful way to preserve family heirlooms. If you admire an ancestor’s taste in tableware and regret that some or all of the pieces have been lost, recreate a family service in the cherished pattern.

When collecting pottery or porcelain, follow the “buy what you like” rule. Find a pattern you will continue to enjoy through the years and never hesitate to use it. Do not hold it hostage in the china cabinet. Part of happy holidays is bringing out a favorite service and sharing its beauty with your guests. 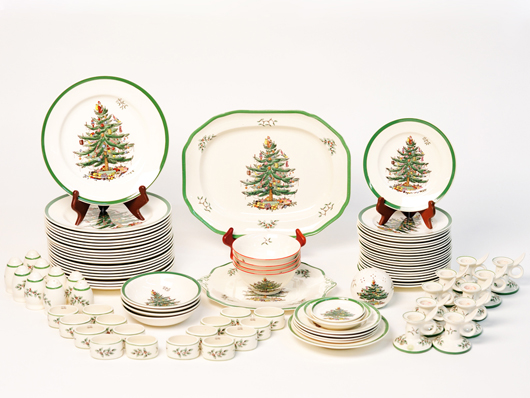