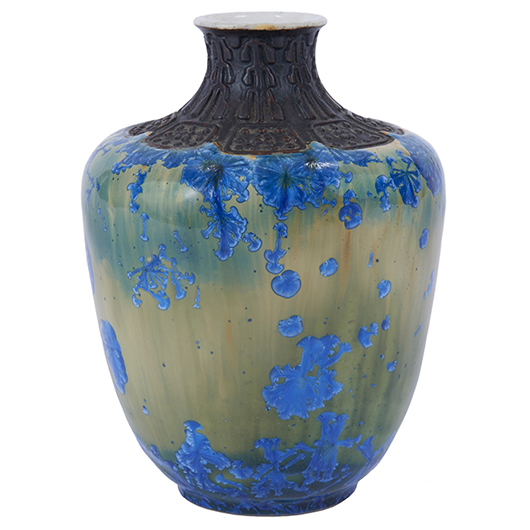 ST. LOUIS – When a single art pottery vase by Frederick Hurten Rhead was sold in April by John Moran Auctioneers for a record-breaking $570,000, collector attention again focused on the University City pottery and porcelain works. Production at the studios lasted only a few years and never achieved commercial success. Yet, for one shining moment, the project united the talents of three luminaries of the ceramics world – the British-born Rhead, America’s premier woman potter Adele Alsop Robineau, and French porcelain master Taxile Doat.

Around the turn of the 20th century in St. Louis, wheeler-dealer businessman E.G. Lewis was constantly on the lookout for new commercial opportunities, although he had a history of not finishing what he started. No doubt encouraged by his wife, Mabel, he got into the specialty magazines-for-women field. By the time of the famous Louisiana Purchase Exposition in 1904, he had purchased 85 acres for residential real estate development and built his publishing headquarters there. University City, where he invested, still exists as a separately governed town within St. Louis and the beautiful Woman’s Magazine Building is now its City Hall.

Women’s rights and women’s education were the viral topics of the day. Seizing the moment, Lewis set up what he called the American Woman’s League and conceived a grandiose scheme to establish a university curriculum of correspondence courses to sell to his magazine subscribers. He began by hiring well-known teachers for an Art Academy to offer instruction in drawing, painting, sculpture, and above all ceramics. The time between Lewis’ proposal of the idea in 1909 and the last kiln firing in 1914 was short, but the pottery and porcelain made by the faculty in that brief period remains as a breathtaking tribute to a dream that was never quite realized.

Collectors face two difficulties in their study of University City’s output. Little of the output of the ceramic studios was offered for sale, and there is no distinct, easily recognizable unifying style. Fortunately, the entire complex story of Lewis and his educational venture is explored in the excellent catalog University City Ceramics: Art Pottery of the American Woman’s League by David Conradsen, curator of decorative arts, St. Louis Art Museum, and Ellen Paul Denker, written to accompany a 2004 exhibition.

An archival photo reprinted in the catalog documents Lewis’s initial success in staffing the Art Academy ceramics division with internationally recognized talent. The occasion was the first kiln firing at University City in April 1910; the production is displayed on tables in the front. At center stands Adelaide Alsop Robineau (1865-1929), one of the most influential American ceramists of the Arts and Crafts Movement. Based in Syracuse, New York, she was a brilliant studio potter devoted to creativity not commerce. In 1899 with her husband, Samuel, she had founded the magazine Keramic Studio, which explored ceramic manufacture and decoration.

Standing on the right in the 1910 photo is Taxile Doat (1851-1939), the venerable French master with a snowy beard, who arrived in St. Louis from France in 1909 to head the ceramics department at University City, where he remained until its closure in 1914. While working in porcelain at Sevres, he had specialized in delicate pate-sur-pate decoration using classical themes, but he also experimented in his private studio with Japanese forms and glazes. The Robineaus had published a translation of Doat’s book on porcelain technique, Grand Feu Ceramics, which had influenced Adelaide to become an expert in that medium.

At left in the photo is Frederick Hurten Rhead (1880-1942), who arrived at University City to write the correspondence course in pottery making and to teach advanced students, while he made exquisite works of his own, which would further the reputation of the school. Born and trained in England, Rhead and his wife, Agnes, had been in the United States since 1902; he had worked in many of the Ohio potteries and eventually continued his career in California after leaving St. Louis in 1911. He was already well-known to American potters through his articles in Keramic Studio.

The St. Louis Art Museum is fortunate to retain works by all three of these notable University City ceramists in its permanent collection and examples can be viewed online at www.slam.org. In an interview with ACN, curator David Conradsen noted, “Doat had published the secret of how to make porcelain, which was the province of national manufactories like Sevres. Businessman E.G. Lewis seized on the idea of hiring Robineau and Doat. If she can teach herself how to make porcelain using this formula as published by Doat, any American woman can do it. And then he added Rhead for good measure, an artist who was published almost weekly in Keramics Studio.

“He brought this extraordinary group of talent to University City, and it’s unfortunate that they didn’t have a longer run. But what we’re left with are these extraordinary objects and the story of these fascinating individuals. There’s the problem of what Lewis said he was doing and what he actually did. He talked big, but I do think he was kind of a visionary. He just had too many balls in the air and he never stuck with anything long enough to see it succeed. It’s easy to second guess Lewis but when you look at the objects, they speak for themselves. The ceramics are his lasting legacy.”

Each of the three artists under discussion had distinguished careers before and after the University City venture, so collectors must consider what pieces were made there and what was manufactured elsewhere. An index on marks in the Conradsen catalog is a guide to possible variants. The record-setting Rhead peacock vase had an impeccable provenance beginning with its purchase in St. Louis in 1910 and ending up several generations later in Southern California, and Rhead did some his best work while in residence at University City. A 1910 panel of tiles with peacock design is a prize possession of the Two Red Roses Foundation, which is planning a new Museum of the American Arts and Crafts Movement scheduled to open in Florida in 2017.

Adelaide Alsop Robineau also was at University City for only about two years, yet it was there that she created her masterpiece, the intricately carved “Scarab Vase” now at the Everson Museum of Art. This vase and several others created for the American Woman’s league were part of the presentation that won her the grand prize at the international exposition in Turin, Italy in 1911. One mark she used was her monogram with an incised UC and a date.

Although much of her work is now in museums, Robineau’s forms and other ceramics by the University City artists do show up at auctions. Don Treadway of the Treadway Toomey Galleries said recently, “I’ve actually sold a good bit of Robineau and University City privately. I have two clients in the St. Louis area who like it because of the local connection. I have had numerous things through the years by all of these people, but it’s pretty difficult to find most of it. In terms of the more important artists in American art pottery, these were some of the best and some of the most elusive. You can have all the money in the world but you can’t always find pieces.” Treadway was fortunate enough to sell a rare Frederick Rhead vase in 2007 which had been consigned from a California collection.

Taxile Doat had a long and prolific career, principally in France, so his work shows up at European auction houses as well as in American sales. He arrived in University City with a large study collection of his porcelains, and then – as was the case with Robineau – went on to do some of his most spectacular exhibition pieces while working at the school. Another archival photo shows him at work in the studio on a monumental porcelain charger commemorating the first convention of the American Woman’s League. Collectors can choose from wide variety of Doat styles ranging from classical works for Sevres to simple Japanese forms with stunning glazes.

University City Ceramics catalog is available for $29.95 from St Louis Art Museum bookstore; call the shop at 314-655-5249 or email museumshop@slam.org. 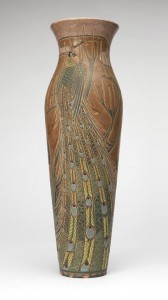 Perfectly suited to the form, a multicolored peacock wraps its tail around a slender vase signed by Frederick and Agnes Rhead, which sold for a record-setting $570,000 at John Moran in California last year. Dated 1910, the masterwork was created by the artist and his wife during their brief residency at the University City ceramics school for women in the St. Louis area. John Moran Auctioneers image 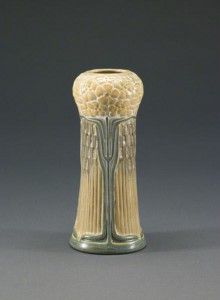 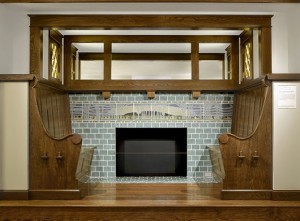 The Rheads also created architectural tile patterns for interior decoration. A fireplace surround with landscape frieze was created in 1911 for the home of John J. Meacham in University City and is now permanently installed in the St. Louis Art Museum nearby. St. Louis Art Museum image 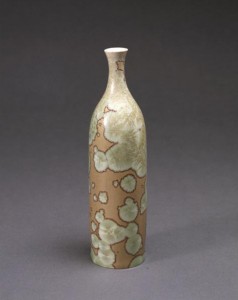 Taxile Doat, who came to University City directly from the Sevres factory in France, had literally written the book – ‘Grand Feu Ceramics’ – on porcelain manufacture. Among his works now in the collection of the St. Louis Art Museum is this variation on a traditional Japanese sake bottle covered with a crystalline glaze. St. Louis Art Museum image 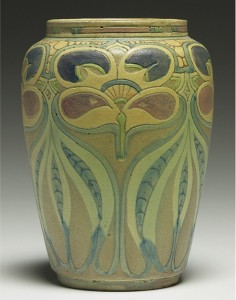 Although he produced art pottery and tiles both before and after his residency at University City, important works by Frederick Rhead seldom come on the market. This small vase with an incised organic pattern was hammered down for $21,000 at Treadway Toomey in 2007. Treadway Toomey Auctions image 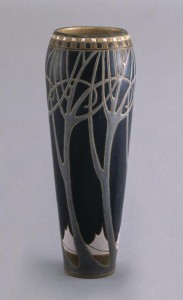 Once again, Frederick Rhead demonstrates his ability to unify form and design in this 12-inch vase wrapped with an incised pattern of winter trees, made circa 1911 during his residence in University City. 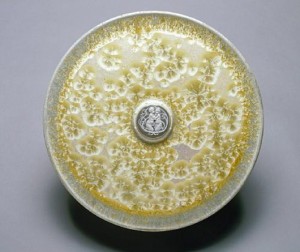 When Taxile Doat arrived at University City to teach porcelain techniques in 1909, he brought with him a study collection of examples he had produced while working in the Sevres factory or his French studio. One of hiss favorite forms was a glazed circular charger with a classical pate-sur-pate medallion at its center. Similar examples have sold on the American and European auction markets in the $3,000-$7,000 range. St. Louis Art Museum image