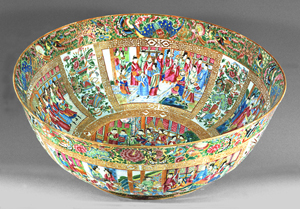 On view at Winterthur, this monumental punch bowl, 1820-1840, is part of an exhibition previewing a promised gift of Chinese export porcelain from the collection of Daniel and Serga Nadler. The bowl is decorated with figures in what is sometimes called the ‘Mandarin’ style, using a palette inspired by famille rose enamels. Photo credit: Daniel Nadler.

Prized by collectors and coveted by museums, Chinese export porcelain continues to be worth its weight in gold. In April, Winterthur in Delaware devoted its annual ceramics conference and exhibition space in the galleries to the popular topic as it revealed that yet another outstanding group of porcelain was destined for the permanent collection.

Serious students of ceramics who regularly attend this important educational event were delighted to read: “This year’s conference celebrates the recently promised gift to Winterthur of The Daniel and Serga Nadler Collection of Chinese Export Porcelain and features a galleries display of more than 60 objects from that collection.” Lectures presented by experts from both sides of the Atlantic explored Chinese porcelain and its markets around the world as well as the Western wares it inspired.

Leslie B Grigsby, senior curator of Ceramics & Glass, when interviewed before conference, said, “We try to vary our subjects each year, but anytime we do a Chinese subject, there’s such a wide interest in it that many people sign up. We enjoy doing it and it certainly is more fun when the audience gets excited as well.” Among the speakers were Rose Kerr, former keeper of the Far Eastern Department at the Victoria and Albert Museum, on “Chinese Export Porcelain at the V&A,” collector Daniel Nadler on “New Century/New Markets: Chinese Export Porcelain in the 1800s,” and Grigsby on “An Adoration of the Orient: the Chinese Taste Reflected in Western Ceramics.”

Winterthur’s core collections of American furniture and decorative arts were assembled by legendary collector Henry Francis DuPont (1880-1969). The inventory includes a wide variety of ceramic types, including wares from England, Europe and Asia popular with American consumers in the 17th, 18th, and 19th centuries. Among the holdings are over 5,000 Chinese export porcelain objects, many of them produced for the American market. George Washington was only one of the founding fathers who sent special orders for porcelain wares to China, and the museum has more than 70 pieces from his dinner service decorated with the emblem of the Order of Cincinnati.

The Chinese export holdings were further enriched when the Hodroffs presented choice examples from their extensive collection to Winterthur. These wares were documented in Made in China: Export Porcelain from the Leo and Doris Hodroff Collection at Winterthur (2005) by Ronald W. Fuchs II in collaboration with David S. Howard, which has proved an invaluable illustrated reference for collectors.

The introduction sums up the material’s appeal to both the original purchasers and today’s collectors: “With its fine white body, delicately painted decoration, and associations with the exotic and mysterious world of Asia, porcelain has symbolized wealth and refinement from the time it was introduced to the West during the Middle Ages. Since then, as many as 100 million pieces of ‘china,’ as it became known, have been transported to Europe and American – encouraging the development of international trading networks linking Asia and the West; inspiring major developments in the European ceramics industry; and revolutionizing the way people drank, dined and decorated their homes.”

The future acquisition of objects from the Nadler Collection will add even more depth to Winterthur’s Chinese ceramics holdings. Collectors around the country can view examples at www.winterthur.org under “Online Collections.” There the museum announced: “The Nadler Collection of Chinese export porcelain, recently promised to Winterthur, focuses on objects from the Qing Dynasty, which ruled China from 1645 until 1908. Many of the pieces date to the 19th century and include wares made for different market around the world.” Using the link above, collectors can access a digital copy of Daniel Nadler’s book China to Order, which explores polychrome porcelain from the Qing Dynasty.

Leslie Grigsby explained how the Nadler Collection will enhance the museum’s Chinese export porcelain collection: “It includes objects that were created for markets that we in America don’t normally get exposed to – for example, the Indian market and the Near Eastern market. There are also exceptional pieces that were created for the American and English markets. The Nadlers’ taste is a different one from the Hodroffs’. In many cases, the brilliant colors and the divine motifs contrast in a wonderful way with what we have from the Hodroffs.”

Intelligent collecting in any field requires both knowledge and experience, and Chinese export porcelain can be especially challenging. The country that gave its name to “china” has never stopped producing porcelain. Motifs, colors, even marks have been cleverly copied over the centuries. Background research by reputable auction houses can help separate “period” pieces from objects made to appear antique. Chinese buyers often prefer to purchase porcelain from well-documented American collections.

Leo and Doris Hodroff made gifts not only to Winterthur but also to museums in Minneapolis and Palm Beach, Fla., where they had residences. Other pieces from the vast collection, however, were sold at Christie’s in New York in 2007 and 2008, setting benchmarks in the market and attracting buyers from all over the world. A “Hong” punch bowl, circa 1775-1780, sold to a European private buyer for $103,000; a famille rose dinner service to a U.S. collector for $67,000; and a blue and white Kangxi period vase to an Asian dealer for $58,600.

Regional auction houses around the country regularly handle Chinese export porcelain from local estates. Both American and Asian buyers track upcoming sales in New Orleans. Last year, a near pair of blue and white porcelain bowls with Kangxi marks from the Irving and Bettie Redler Collection was sold at the Neal Auction Co. for $8,365. In 2009, a monumental famille rose punch bowl decorated with figures and flowers in bright enamels brought $14,100. 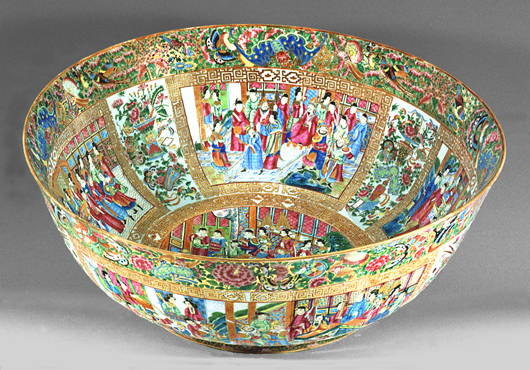 On view at Winterthur, this monumental punch bowl, 1820-1840, is part of an exhibition previewing a promised gift of Chinese export porcelain from the collection of Daniel and Serga Nadler. The bowl is decorated with figures in what is sometimes called the ‘Mandarin’ style, using a palette inspired by famille rose enamels. Photo credit: Daniel Nadler. 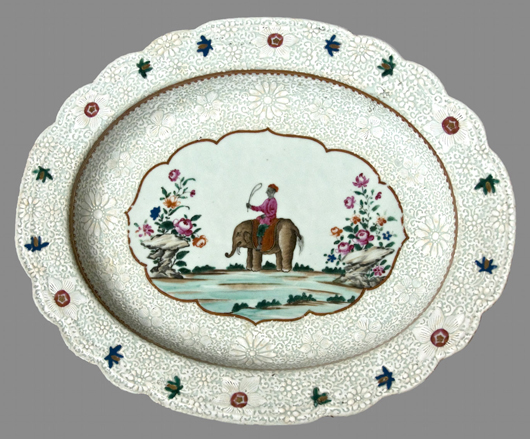 The Nadler Collection includes export porcelain made for British colonials living in India. This oval dish, circa 1760, is decorated with the figure of a mahout on elephant back. The white-on-white border ornamentation was widely imitated in the West. Photo credit: Daniel Nadler. 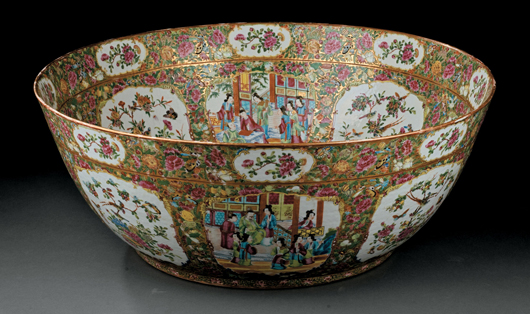 This monumental Chinese famille rose porcelain bowl (diameter 23 1/2 inches), made in the 19th century during the Qing Dynasty, is decorated in vibrant enamels with panels of floral and figural scenes. The lot surpassed its $7,000-$9,000 estimate to bring $14,100 at a Neal auction in 2009. Courtesy Neal Auction Co., New Orleans. 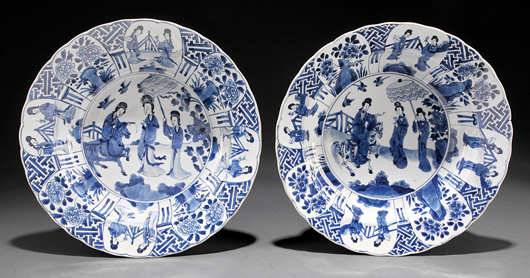 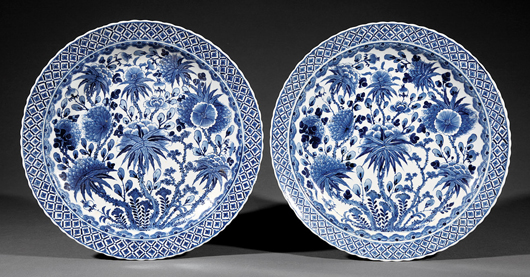 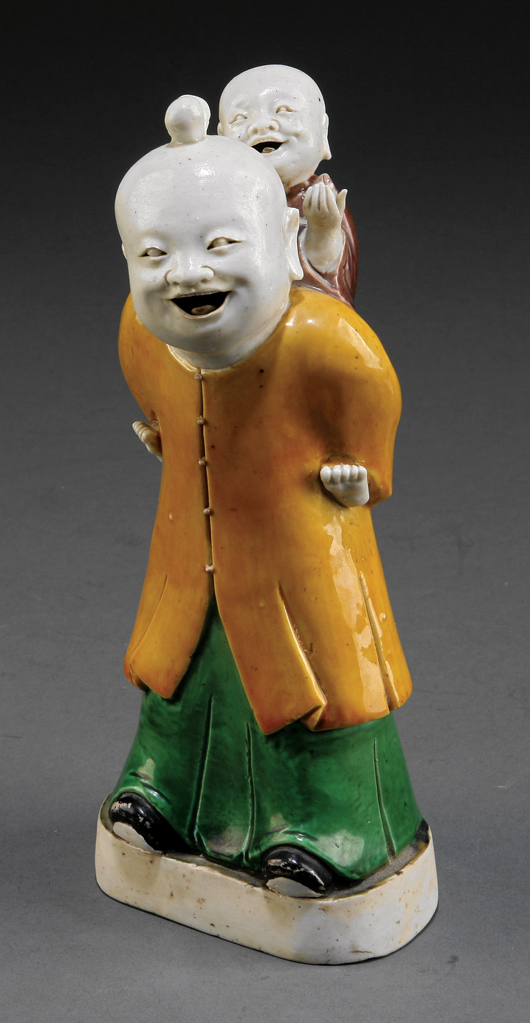