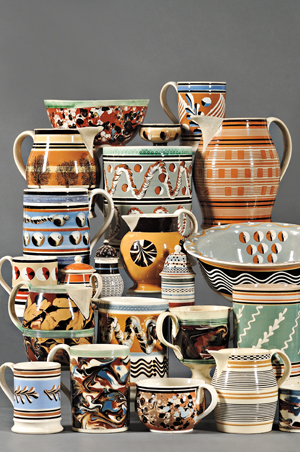 Throughout the 18th and 19th centuries, furniture, silver, and glass made on this side of the Atlantic were used side-by-side with imported English ceramics. American consumers demanded many popular products made in British potteries, such as salt-glazed stoneware, blue and white transfer prints, gaudy china, and mocha. This demand was filled by traders in East Coast cities who received regular shipments from England.

Skinner’s March 7 auction of American Furniture & Decorative Arts in Boston was particularly rich in mocha ware. The back cover of the catalog featured an eye-popping array of mugs, jugs and bowls decorated with the bright bands, checkers, marbling and slip splotches that characterize the pottery. The four-figure prices achieved by many lots demonstrate collectors’ passion for desirable forms and patterns.

At first glance, the array might be mistaken for the output of a particularly creative modern studio potter. But the pieces were actually produced on factory worktables at English potteries in the late 18th, 19th and early 20th centuries. Most designs were achieved through the clever application of tinted slips while the pieces were manipulated on an engine-turned lathe.

Stephen Fletcher, director of the Americana department at Skinner’s, was not surprised by the sales results. “As much as we’ve handled over the years, I never tire of mocha. To me it always has this fresh appealing quality about it. I love the colors. I like the manner in which the designs are applied. There were several of the bowls that looked like Jackson Pollack had dribbled slip glaze on those. And other pieces have a kind of formal quality to them,” he said.

The expert can testify to its popularity in past centuries. “I own an old house on Cape Cod,” he said. “When we did some excavating while repairing the foundations, we found all sort kinds of shards, including chunks of mocha ware in the most beautiful colors. It’s small wonder that Americana people like mocha so much because it’s been a part of New England décor for a long time.”

Fletcher said the buyers were a cross section of dealers and collectors who appreciate the vivid appeal of the wares. “You find different approaches to collecting it,” he continued. “There are buyers who like mocha with chips, cracks, stains and all – in ‘as is’ condition. Some people who collect mocha ware will accept flaws, as well they should – it doesn’t ruin a piece if it’s chipped or stained. There are other people who like mocha that has been professionally repaired and restored.”

Even more important to collectors are the desirability of certain patterns and the rarity of certain forms and sizes. Fortunately, Jonathan Rickard has written an authoritative reference, Mocha and Related Dipped Wares, 1770-1939, which explains in detail the variety of techniques used to decorate the ware.

With a background in fine art, Rickard said he was immediately attracted to this pottery because he saw “the shapes of Bauhaus and a decoration of abstract expressionism.”

Rickard begins his book by defining the subject: “lathe-turned refined utilitarian earthenware whose principal decoration has been achieved with slip.” Although he knows he can never change common usage, he points out that the term “mocha” properly designates only those pieces decorated with the dark dendritic tree or “seaweed” motifs on lighter bands of slip. He recognizes that collectors now use mocha ware to refer to all the slipped and dipped designs that he covers in the book.

In addition to the delicate trees noted above, collectors seek out pieces that feature looping “earthworm” trails and circular “cat’s-eye” patterns. Both were produced by the deft use of a multichambered slip pot applied as a piece was rotating. The reference book also explains the methods used to create pieces with variegated surfaces and banded pottery.

Rickard has collaborated with craftsman Don Carpentier of Eastfield Village in upstate New York. The potter has been able to recreate the designs on mocha and related slipwares, a process that has added new information about the techniques involved.

Since this was utilitarian pottery, certain shapes predominate – straight-sided mugs, jugs of various sizes, pepper and mustard pots, and bowls. Less common are coffeepots, teapots and flowerpots. The ceramic bodies are mostly described as creamware or pearlware, with base colors ranging from white to cream and tan.

Rickard has also worked with archaeologists excavating at pottery sites in England. “We are pretty well convinced that there are a few different potteries that produced the bulk of the stuff that came to America,” he said. “And each one of them has its own handwriting basically. If you’ve seen enough of the stuff, you can recognize the work from one factory.”

One pottery involved was Wood and Caldwell, later Enoch Wood & Sons, located in Burslem in the Staffordshire area. More makers are listed in his book. Such factories worked in an assembly line fashion, making multiple example of the same shape with the same design. But the capricious techniques involved in the decoration ensure that each piece differs slightly from its fellows.

The serendipity of slip application produces individual compositions that seem like masterpieces of abstract expressionism. Strong design, harmonious color schemes and elegant forms bring the highest prices at auction. A good example from the March Skinner’s sale is a 2-quart pearlware mug circled with looping earthworm and cat’s-eye motifs. Its final price with premium was $2,844.

As Rickard states in his book, “It was the striking appearance of dipped wares that first intrigued me and so many other collectors. These pots will continue to enthrall those whose eyes are charmed by their colors and patterns.” 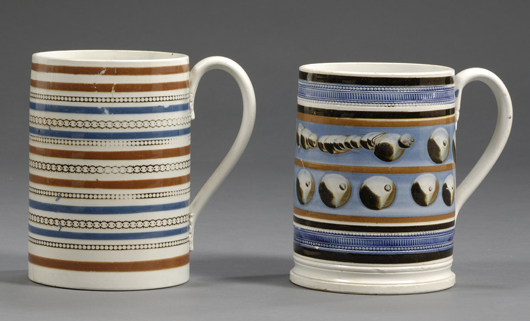 A lot of two banded quart mugs, one with cat’s-eye decoration, brought $1,541 in a March sale of American Furniture and Decorative Arts at Skinner’s. Image courtesy Skinner Inc. 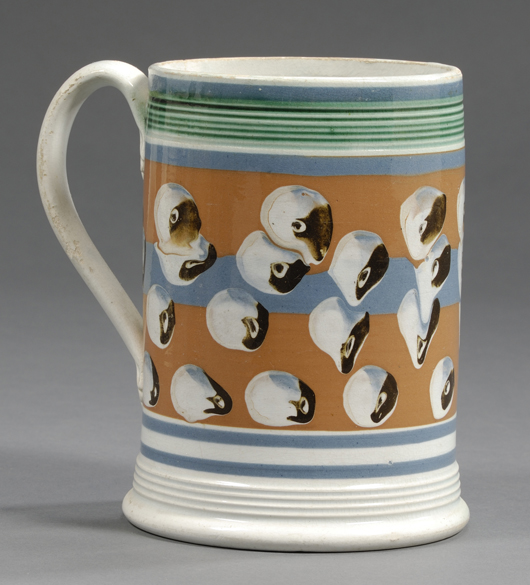 This English quart mug, circa 1830, has a reeded rim and base framing bold cat’s-eyes on a blue and tan ground: $1,007. Image courtesy Skinner Inc.

A baluster form pepper pot, made around 1800, has a pearlware body circled by an engine-turned pattern filled with dark slip: $948. Image courtesy Skinner Inc. 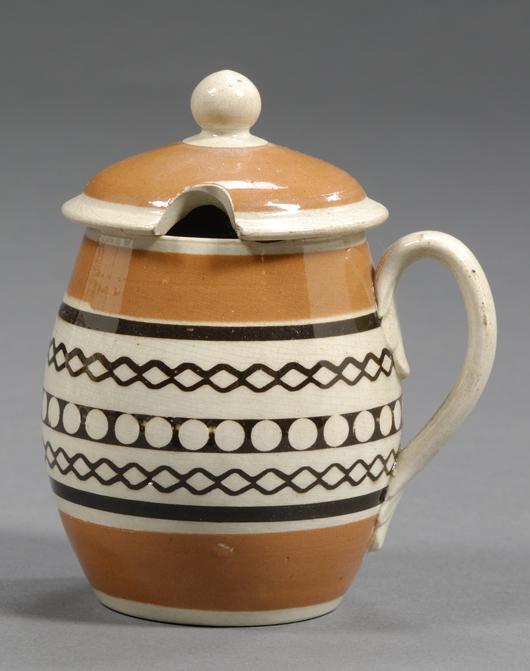 Mustard was an essential condiment on English tables in the 19th century. Less than 4 inches high, this small covered pot is ringed with geometric bands: $474. Image courtesy Skinner Inc. 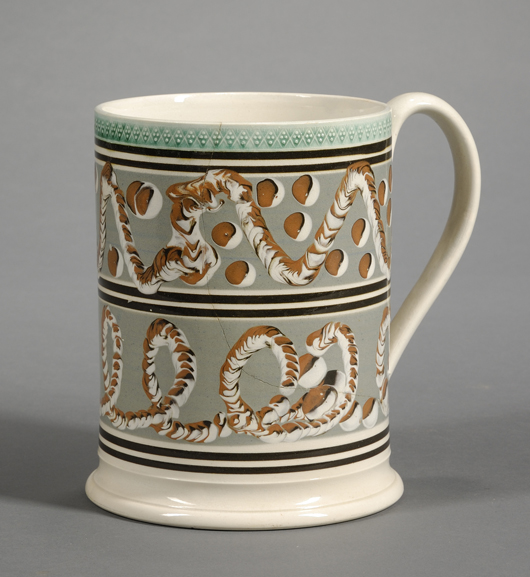 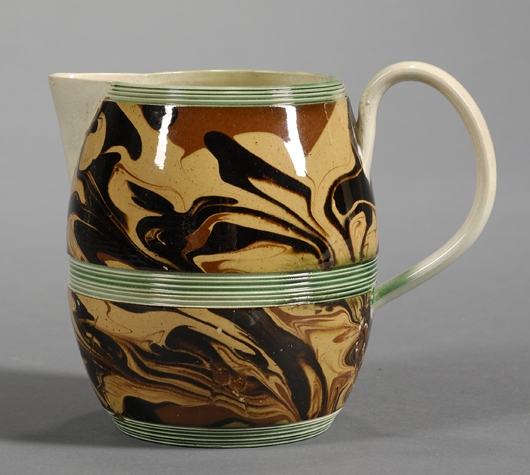 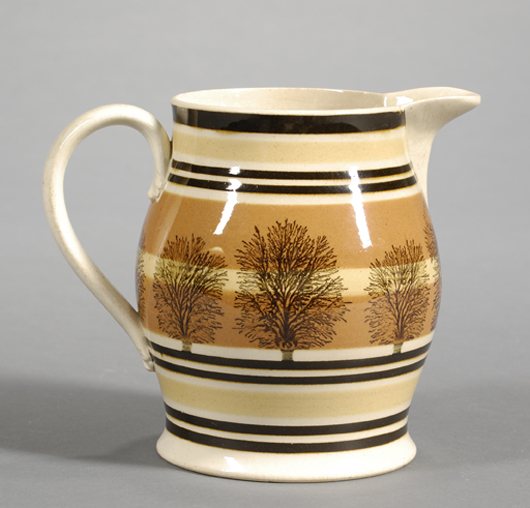 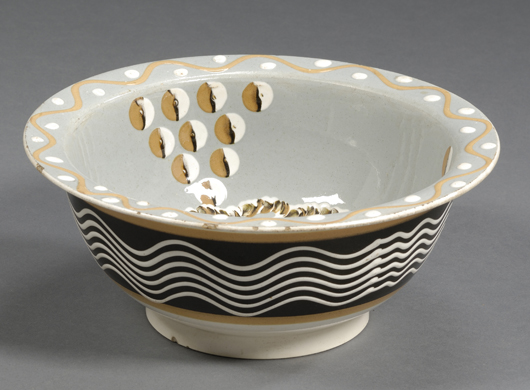 Great graphics – cat’s-eyes and earthworm trails on the interior and undulating lines of slip on the exterior – add value to an early 19th-century bowl, which brought $2,607 at the March auction. Image courtesy Skinner Inc. 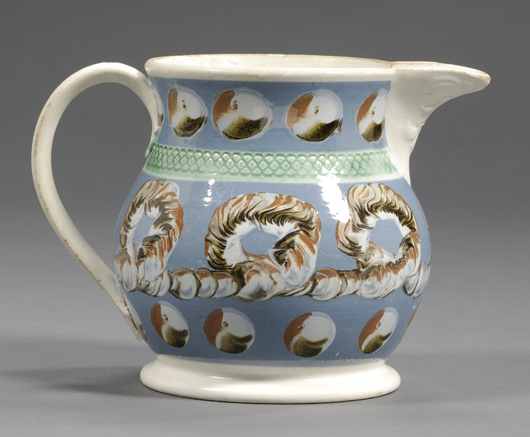 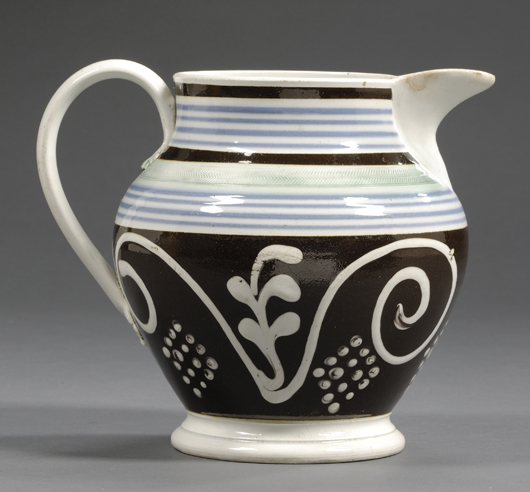 Art official: painting in storage may be Raphael’s
Scroll to top