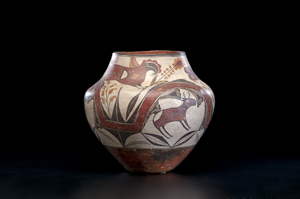 This Acoma pottery olla decorated with parrots and deer, made around 1900, will be offered in Cowan’s September 9th sale of American Indian and Western Art – estimate $5000-7000. Particularly colorful, the intricate pattern features pale orange and a darker reddish-orange as well as black and white. Courtesy Cowan’s Auctions.

ACOMA PUEBLO, N.M. (ACNI) – Acoma Pueblo may be the oldest continuously occupied settlement in North America with a history dating back to 1150 A.D. Built on a sheer sandstone bluff 65 miles west of Albuquerque, “Sky City” – as it is called – offers visitors breath-taking views of the surrounding landscape.

The Acoma and adjacent Laguna communities have a long tradition of producing beautifully-shaped and skillfully decorated pottery vessels. Both historic and modern examples are highly sought-after by collectors.

For anyone interested in pueblo pottery, Santa Fe is a place of pilgrimage in August. Mid-month, more than 100 well-known dealers come together at the Santa Fe Community Convention Center for the Annual Indian Art Show, which features historic Native American antiques and artifacts. The Antique Tribal Art Dealers Association presents a lecture series in conjunction with the show. For more information, go to whitehawkshows.com.

A week later, the legendary Santa Fe Indian Market presents the best artists on the contemporary scene. This year’s market will be held August 20-21. The event, presented by the Southwestern Association for Indian Arts (swaia.org), is now in its 90th year and includes everything from pottery and textiles to cinema and skateboarding.

Auction houses from around the country also participate in these gatherings of collectors, seeking out new consignments and advertising their upcoming auctions. Wes Cowan of Cowan’s Auctions in Cincinnati, Ohio, is an exhibitor at the Indian Art Show. The firm’s next sale of American Indian and Western Art on September 9th will include a one-owner collection of Acoma Pottery from New Mexico.

Department head Danica M. Farnand says, “The September sale has a beautiful collection of pottery that just sort of walked in the door; there are about 14 pieces in the group. What’s cool about this collection is that almost all of the pieces have polychrome decoration. I think, in the recent past, this is the best collection of pottery we’ve had.”

She continues, “There is one piece that’s very interesting because it has two different animals – birds around the top and deer underneath. I think that’s going to do very well.” Although the expert says the estimates are conservative, many prices for these fine examples will soar into the four-figure range.

Farnand says, “We have American Indian Art sales twice a year. I believe the department started when we sold the collection from the Western Reserve Historical Society in September 2002.” The 2011 sale also includes pottery from other Native American production centers in the Southwest – Laguna, San Ildefonso, Zuni, Santo Domingo, Zia, Santa Clara – as well as more recent examples of Acoma work.

The Acoma are a matriarchal society with property descending from mother to daughter. As more women potters began to sign their work in the last century, collectors have focused their attention on favorite artists such as Lewis, Marie Z. Chino, or Jessie Garcia.

Perusing displays in museums, shows, and auctions, viewers will notice that the most common Acoma form is the water jar or olla, decorated with various motifs. The 2003 Metropolitan Museum of Art exhibition catalogue The Responsive Eye: Ralph T. Coe and the Collecting of American Indian Art is an important reference for collectors. Coe was a former museum director who made an important contribution to scholarship in the field.

In the catalogue, Coe outlined a decorative history for this characteristic pottery shape: “Pottery from Acoma Pueblo was initially geometric in design. It was also highly symbolic in its representation of cloud terraces, rainbirds, and life-giving waters. The jar, or olla, was made to hold water, and is thus in itself a prayer for sustenance.”

He continued, “By the middle of the nineteenth century, the designs on Acoma water jars had evolved into heavy bars joined together in a rainbow band and discernible parrot motifs appeared that are more representational than the earlier rainbird abstractions.”

“The next phases, which began about 1875…brings split-leaf designs with a suggestion of berries and other vegetation, while the bar designs take on the shape of an hourglass. These developments set the stage for the introduction of motifs that are more fine-lined and calligraphic and which impart a greater sense of repetition around the pot.”

New York dealer Marcy Burns is an exhibitor at the Indian Art Show and also presents her inventory of pottery, baskets, textiles, and jewelry at mainsteam Americana events like the Philadelphia Antiques Show. She notes, “Acoma pottery has always been considered among the finest of all pottery. The pottery can really be called Acoma/Laguna, because the Acoma and Laguna intermarried, and the clay is the same. Women from these communities were very talented potters.”

Burns emphasizes the importance of the local clay: “One of the reasons Acoma/Laguna pottery is so highly valued is that the clay near those two pueblos has a lot of kaolin in it, and it’s fired at a very high temperature. This makes it thin-walled and strong. Because of the nature of the clay itself, they could make it a thinner-walled vessel. And the clay is very white and that tends to set off the designs.”

“The water jar is a traditional form but it’s also very sculptural, and people always respond to that,” she continues. “When you’re examining the pottery, look at the form and how sculptural it is. The pieces were hand-formed, so you want them to be symmetrical. There are technical considerations – has the piece been well-fired, has the paint held its color, how well does the decoration suit the form?”

“Any decoration that has animal references or people is desirable. You see more animals. The pots we call ‘polychrome’ are usually three colors, but they did do four colors at Acoma early in the 20th century, and this has been revived in contemporary pottery.” The four colors commonly seen are black, white, a darker orange-red, and pale orange.

Fortunately, collectors interested in historic pottery from the Southwest have access to excellent books discussing the styles of various pueblos. The classic reference Acoma and Laguna Pottery by Rick Dillingham (School of American Research Press 1992) is still available through online booksellers and at sarweb.org. Dillingham (1952-1994) was a dealer in historic and contemporary native ceramics and organized important exhibitions of this material.

Inspired by his research at the pueblos, Dillingham – also a master ceramicist – developed his own distinctive pottery style. He received several National Endowment of the Arts fellowships. The Cowan+Clark+Delvecchio Ceramics auction in June 2011 offered several examples of his work including a globular raku “shard” vase from 1989 that sold for $9694.

Dwight Lanmon, formerly Director of the Winterthur Museum and the Corning Museum of Glass, relocated to Santa Fe, where he is now Research Associate at the Museum of Indian Arts and Culture and the School for Advanced Research. The scholar has written an entire series of books on pueblo wares in partnership with Francis H. Harlow. So far the duo have published, The Pottery of Zia Pueblo (2003), The Pottery of Santa Ana Pueblo (2005)), and The Pottery of Zuni Pueblo through the Museum of New Mexico Press.

According to the School of Advanced Research website, next will be “The Pottery of Acoma Pueblo (MNM Press, probably 2012), which will illustrate and discuss examples of pottery made there between about 1200 and the present and identify over 800 potters working from the mid 1800s and 1900s. The collections of the Indian Arts Research Center and the Catherine McElvain Library of the School for Advanced Research are central to the research and publication.” Visitors to Santa Fe will enjoy viewing the Center’s extensive permanent collection of pottery. 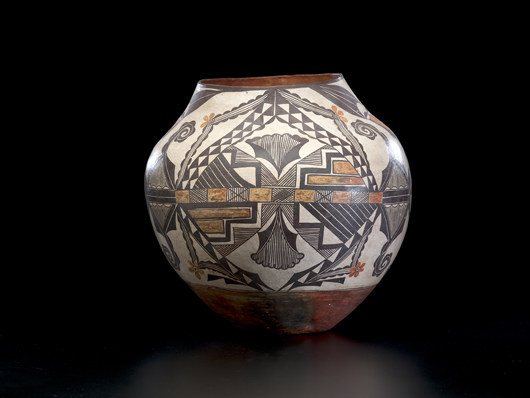 Part of a New Mexico collection coming up for auction in September, a late 19th century Acoma Pueblo olla is decorated with an intricate geometric pattern – estimate $5000-7000. Courtesy Cowan’s Auctions. 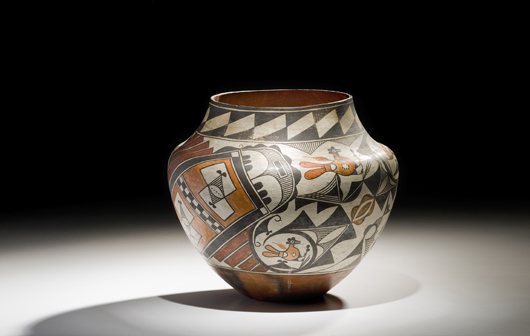 This Acoma olla, circa 1900, has a desirable polychrome decorative scheme featuring stylized birds; it sold in April 2009 for $7637. Courtesy Cowan’s Auctions. 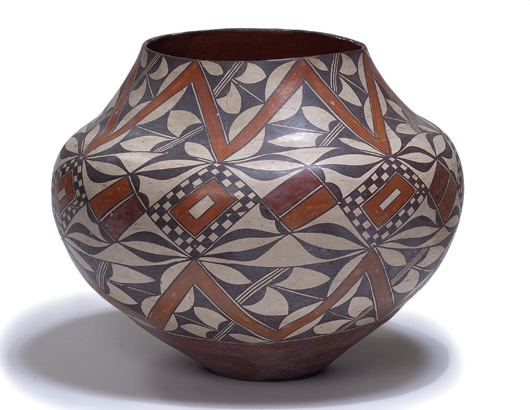 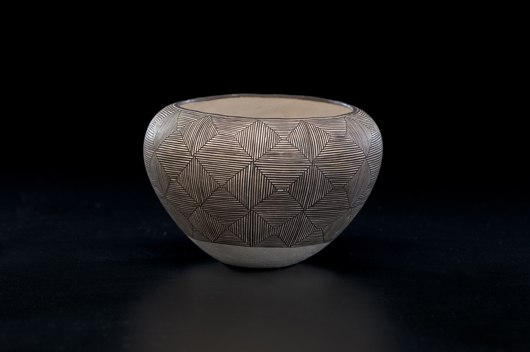 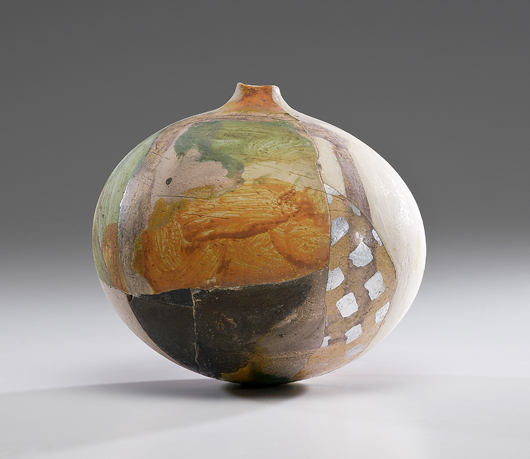 Rick Dillingham (1952-1994) was the author of the 1992 reference Acoma and Laguna Pottery and an Indian Art dealer in Santa Fe. His clay works, inspired by research into pueblo pottery traditions, have become collectible in their own right; this Globe “shard” vase sold for $9694 at Cowan’s last June. Courtesy Cowan’s Auctions.