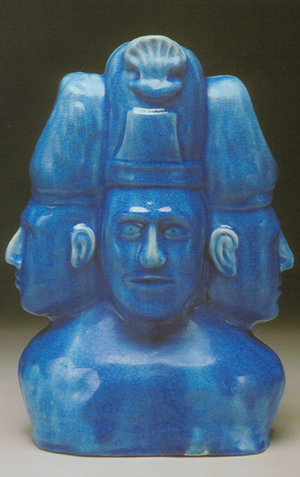 The Arts and Crafts Movement that flourished at the beginning of the 20th century was not just an aesthetic fashion appreciated by a few but a broad-based cultural phenomenon. Well-known artists were in the vanguard, but even ordinary men and women began to make furniture, hammer silver and decorate ceramics at home.

While these crafts remained hobbies for some, more talented artisans met with enough success that they were able to market their creations to the public. The production of studio-made art pottery was an important part of this celebrated movement. To mold, glaze and fire pottery, however, required advanced technical skills and special equipment.

The story of Walter Benjamin Stephen (1876-1961) and his pottery is an excellent example of an avid amateur becoming a successful professional. The venture began on a small scale, yet continued to turn out a variety of wares well into the 20th century, after many better-known art potteries had closed. In spite of an absence of formal training, Stephen mastered difficult decorating techniques and perfected complex glazes through a process of trial and error.

Stephen’s diverse range is currently on display in Pisgah Forest & Nonconnah Pottery, an exhibition of over 70 examples at the Memphis Brooks Museum of Art through Nov. 13. Collector and master ceramicist Rodney H. Leftwich, the principal lender to the exhibition, will lecture on the pottery Saturday, Sept. 24. Leftwich is the author of Pisgah Forest and Nonconnah: The Potteries of Walter B. Stephen.

Walter Stephen was born in Iowa, moved to Nebraska as a youngster, and then settled in Shelby County, near Memphis, Tenn., with his parents. Leftwich explains, “Walter Stephen and his mother were inspired by the Arts and Crafts movement. In 1904, neighbors who had seen pottery at the Louisiana Purchase Exposition in St. Louis told him about it. They found local clay on their farm. Nellie Stephen had been an amateur artist and decided they should do something with the clay. Without any prior experience or knowledge, they decided they would become art potters.”

They named their studio the Nonconnah Pottery after the creek where the clay had been found. Early pieces are covered in a matte green glaze similar to that found at other potteries. Not discouraged by their inexperience, the mother-son duo began to decorate their green vases in a challenging European technique called pate-sur-pate.

Stanton Thomas, curator of European & Decorative Art at the Brooks Museum, picks up the story, “Stephen’s mother Nellie was an amateur illustrator and quite talented. In the exhibition, we have her sketchbook from around 1910. You can see her drawings of flowers and cotton from around the area.”

“If you look at those early works, the poppies on this vase look like they were pulled off an embossed postcard of around 1900. The decorations embody late Victorian and Arts and Crafts Movement motifs and styles and fashions, but there are some new, exciting developments even early in the pottery’s history.”

“Pate-sur-pate was a very laborious slip technique.” continues the curator. “Part of the problem is that you have to put on one thin layer and wait for it to completely dry, or when it is fired, it will crack. The pieces are very beautifully done as far as the technique.”

In 1910, Nellie died and in 1913, Walter Stephen moved to Skyland, N.C., where he re-established his Nonconnah Pottery. He later settled in Arden, south of Asheville, and after 1926 he used the name Pisgah Forest Pottery. Stephen worked there until his death in 1961 and production on a reduced scale has been continued by family and friends at the site.

Since he had lost his principal decorator, Stephen was forced to develop his own designs and glazes to cover the pottery that he produced. Throughout his life, he ornamented some pieces with figural reliefs in white. Collectors call these “cameo” wares. Rather than using molds as was the practice at Wedgwood, the potter once again relied on the pate-sure-pate technique. The subject matter was most often scenes from early American life, such as wagon trains or Indians on horseback.

Rodney Leftwich points out, “The traveling that influenced him the most was going from Iowa where he was born in 1876 to Nebraska by covered wagon and living in a sod house on the prairie close to the Sioux Indians. He moved in 1886 when he was 10 years old, and lived in Nebraska for 10 or 11 years until, I believe, about 1897. They saw the last buffalo hunt, met Annie Oakley and Bill Cody.”

The pieces most sought-after by collectors today, however, are neatly turned shapes covered with the brilliant glazes he developed during his career. One standout was a glossy turquoise blue with notable craquelure, which he applied to monumental vases and sculptures.

One such vase—H. 18 inches—will be offered in the September 24-25 sale at Brunk Auctions in Asheville, N.C., which has handled some of the potter’s best work. Another such vase is on view in the Memphis exhibition along with a massive three-faced turquoise bust, which has been dubbed the “Blue Man Group.”

His finest creation was a shimmering crystalline- accented glaze, which closely approximates that produced by art potter Adelaide Alsop Robineau. Jerry Israel of Brunk Auctions confirms that pieces with this glaze are “the rarest and most desirable. On the scale of 1 to 10, that glaze is a 35. That achievement gives his work a whole other dimension.”

He continues, “When they make crystalline glazes now, they have a lot of control over it – gas jets, things like that. He fired everything with wood.” For every successful piece, Stephen would have another where the glaze did not perform properly when fired. The September sale contains several prize vases in this technique, one with blue crystals on a creamy background, another in a subtle green on beige dated 1936.

Israel notes that Stephen’s works are readily available: “Down here each year, Bruce Johnson does the Arts & Crafts Conference at the Grove Park Inn, always in February, and Pisgah Forest pottery is always there.”

He adds that the pottery may turn up far from Asheville: “You find the most spectacular pieces of Pisgah Forest pottery in Florida or New York State or Michigan—somewhere like that—because it was purchased by tourists. Local people couldn’t afford the big fancy pieces—the visitors bought those.” 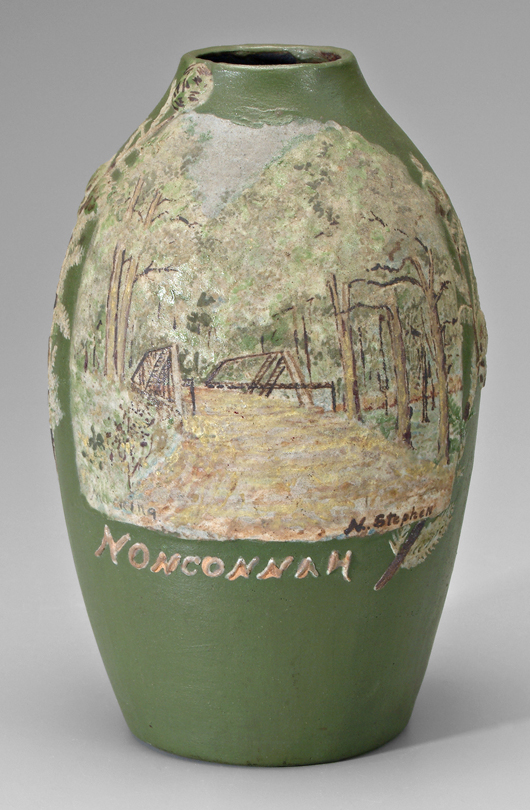 Nellie Randall Stephen, Walter B. Stephen’s mother, was the principal decorator at his first venture, the Nonconnah Pottery in western Tennessee. From the earliest years of production, this matte green vase bearing her signature sold for $8,968 at Brunk Auctions in November 2009. Image courtesy Brunk Auctions, Asheville, N.C. 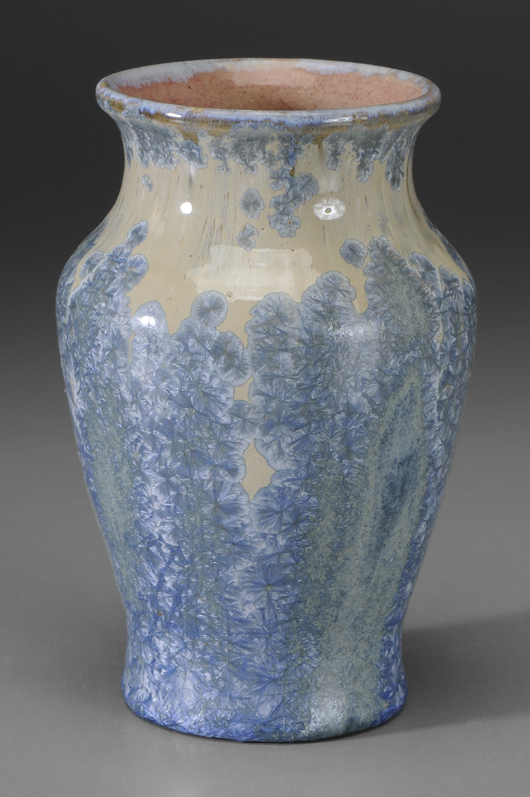 For the Pisgah Forest Pottery, Walter B. Stephen developed a successful crystalline glaze, which he used on a variety of vases and tea wares fired in the 1930s and 1940s. This blue on cream vase will be offered in Brunk’s Sept. 24-25 sale – estimate $500-$1,000. Image courtesy of Brunk Auctions, Asheville, N.C. 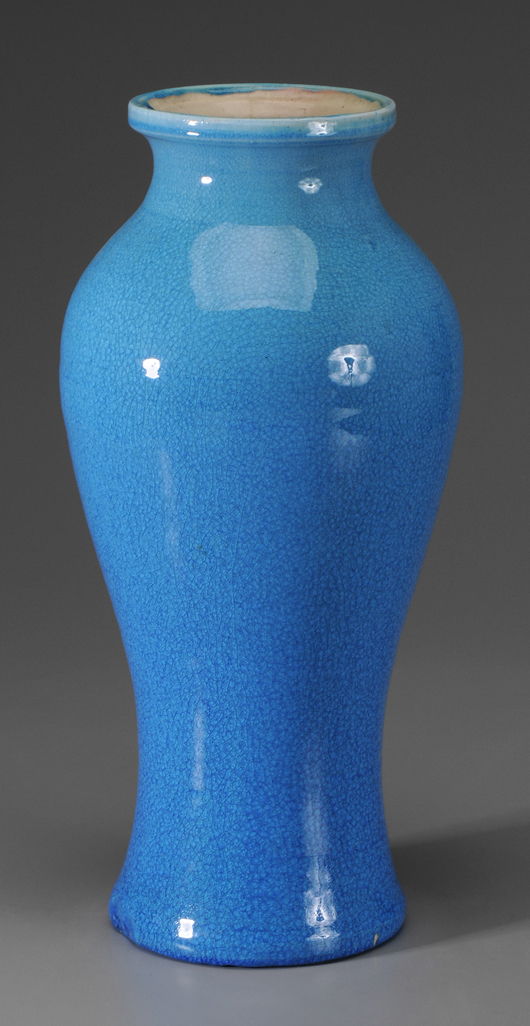 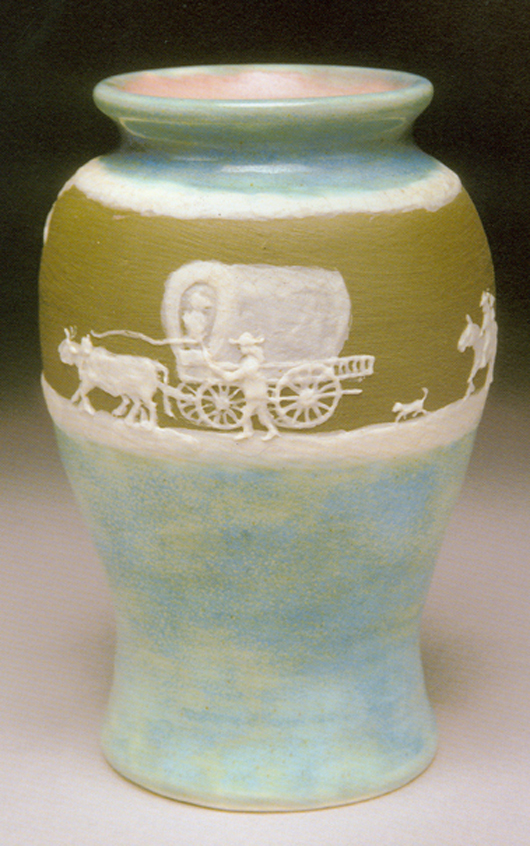 From his earliest days as a potter, Stephen used the difficult pate-sur-pate technique to create scenes of prairie life. He often used a covered wagon motif, which recalled his boyhood journey from Iowa to Nebraska in the late 1800s. Image courtesy of Memphis Brooks Museum of Art 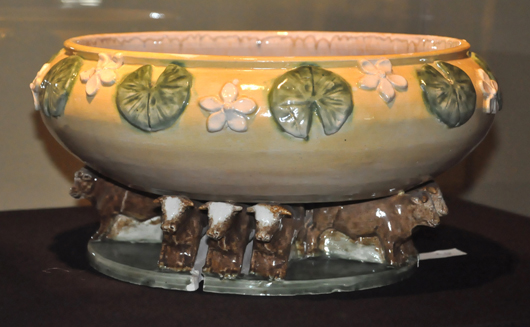 One of the most unusual exhibits in the current museum display of Stephen’s work is this majolica-like basin with relief decoration supported by 12 oxen. Image courtesy of Memphis Brooks Museum of Art