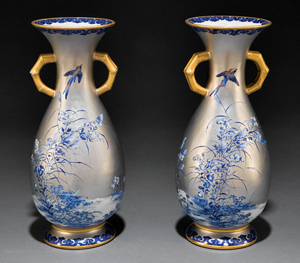 As part of their annual Louisiana Purchase Auction on Nov. 19-20, Neal Auction Co. in New Orleans will offer a pair of 10-inch porcelain platinum ground vases, made for public display (est. $2,500-3,500). Red overglaze script on the base reads ‘Exposition Universelle Paris 1878 and Bender No. 959.’ Courtesy Neal Auction Co.

Secretly long to set your table with Sevres but shy away from the prices? Old Paris porcelain, or Vieux Paris, produced by numerous private factories clustered around the French capital, will satisfy a craving for gilded opulence but not break the bank. Offerings in the antique marketplace range from masterpiece vases to color-banded place settings perfect for holiday entertaining.

The term “Old Paris” is a loose one; the time frame for production extends from the late 18th century up to the 1870s. Larger factories signed their wares with a printed or hand-written name or a maker’s mark, among them Darte Freres, Edouard Honore, Dagoty, and John Nast. Many pieces, however, are not marked, leaving collectors to puzzle over their origin. Some factories sold porcelain blanks to small decorating workshops, so the identical form may turn up painted in a variety of styles.

Shiploads of Paris porcelain were imported into the United States, where it was particularly popular in the South. Dinner services from France graced tables from Texas to Virginia, and French porcelain was used for formal White House entertaining throughout the 19th century. For example, Pierre-Louis Dagoty and Edouard Honore created a dessert service for 30 with eagle and shield motif for President James Monroe’s table in 1817.

During the 1800s, New Orleans was a principal port of entry for goods from France and the French West Indies, and the city remains one of the best places to buy Old Paris porcelain, because the auction houses there receive consignments from historic Southern estates. The sale at the New Orleans Auction Galleries this fall contained the exquisite examples that illustrate this article.

Collectors cannot think of French porcelain in New Orleans without remembering John Webster Keefe (1941-2011), who died unexpectedly at the beginning of the year. Keefe was the RosaMary Foundation Curator of Decorative Arts at the New Orleans Museum of Art and the author of a catalog of Paris Porcelains from the collection. He was known as an entertaining lecturer at antiques symposia and shows, where he shared his knowledge of decorative arts with collectors.

The curator was also the expert on call at the New Orleans Auction Galleries, where he wrote many of the catalog entries on his specialty. Tom Halverson, director of Furniture and Decorative Arts at the auction house, says, “It really was a delight to work with John, and I do miss him every time I begin to catalog. We would always find a few moments to analyze the individual pieces and talk about what was special in the sale. We’d point out the great things to one another.”

“His knowledge of Old Paris porcelain was quite encyclopedic. He was one of the first people to try to educate collectors about the difference between the products of the Parisian factories and what we now know are Franco-Bohemian or early Limoges. He was always quite adamant about representing things correctly and our responsibility to use the cataloging process to educate the public.”

In a memorial tribute, E. John Bullard, NOMA Director Emeritus, said, “I called him the grand acquisitor. … He could go into a flea market or an antique store and find the one item that had real value and quality.” Every collector hopes to development this sixth sense, which helps to build a fine collection.

Keefe’s expertise encouraged gifts of Old Paris to the New Orleans Museum of Art’s permanent collection. In 2009, Keefe wrote about three choice acquisitions: a covered sugar basin, Christophe Potter Manufactory, 1789-1793; a portrait cup and saucer, Dihl and Guerhard Manufactory, circa 1815-1820; and a dinner plate, Denuelle Manufactory, 1825-1835. No visit to New Orleans is complete without a visit to NOMA’S decorative arts galleries.

Superb gilding was a hallmark of French porcelain, but it was used to accent a fascinating array of decorative styles. Firms turned out elegant Classical forms with mythological motifs, exuberant Rococo Revival shapes covered with scrolls and flowers, and simple services bearing broad colored borders edged with gilt. The latter were everyday dishes on 19th-century tables and can still be used and hand-washed today.

Keefe explained why collectors have so much to choose from in his book on Paris porcelains: “The manufacture of porcelain has always been competitive, costly and notoriously risky. These factors forced the Paris manufacturers to broader their clientele continually through the introduction of new colors and forms and by devising new, attractive uses to which porcelain objects could be put. This quest for novel and appealing goods led to the production of a staggering array of dinner, dessert, tea and coffee services; toilette sets; clocks; desk accoutrements; garniture objects; lighting devices and even such architectural elements as mantelpieces.”

In an interview shortly after the volume’s publication, he pointed out that while the Sevres factory had government backing, the privately owned factories had to be serious commercial enterprises: “The range of production at the Paris factories was far richer than for other porcelains because they didn’t have a state subsidy; they couldn’t afford to be slow to respond to changes in taste. They had to get the most fashionable wares out there before the public or they would go under.”

Paris firms also had to deal with competition from factories located in the town of Limoges in central France. Porcelain was made there throughout the 19th century and can be difficult to distinguish from Old Paris wares. Limoges from factories such as Haviland was particular popular with Americans in the second half of the century. President Ulysses S. Grant ordered a service from Haviland in 1869.

Keefe used to say, “The basic rule is to buy what you like.” The quantity and variety of Paris porcelain produced ensures that collectors can always find something beautiful and affordable. Also note that is a field where knowledge pays off; serious collectors will want to assemble a reference library which includes the Keefe catalog and Porcelain of Paris, 1770-1850 by R. de Plinval de Guillebon. Good examples can turn up in unexpected places. Know what you are looking for and you may find a great buy. 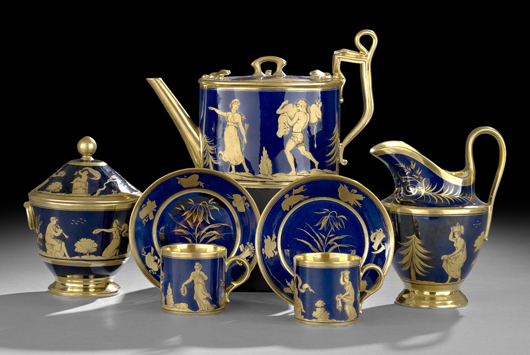 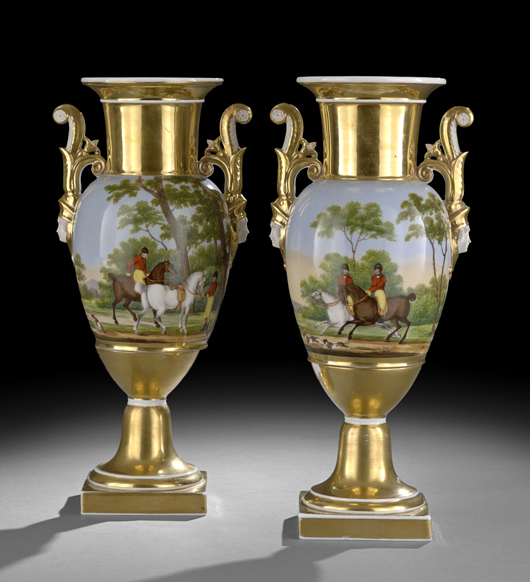 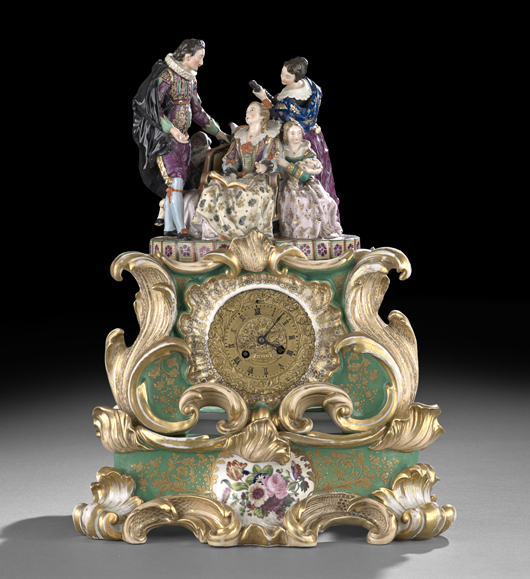 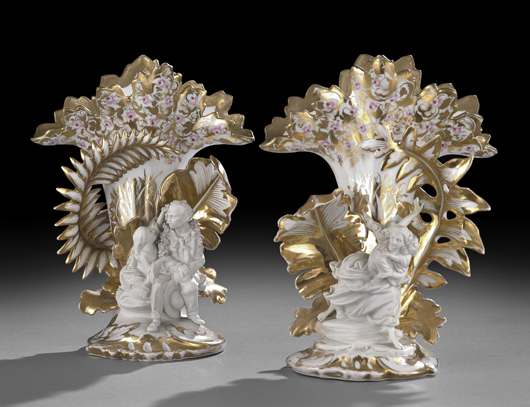 This pair of Limoges porcelain garniture vases is decorated with characters from the popular 1852 anti-slavery novel ‘Uncle Tom’s Cabin’ by Harriet Beecher Stowe and would have been especially appealing to the American market. The set brought $1,107 at a New Orleans sale. Courtesy New Orleans Auctions Galleries. 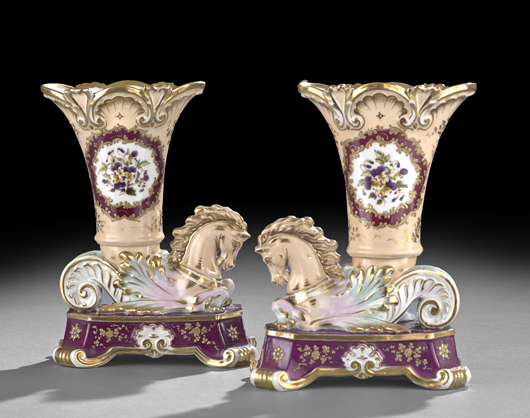 These vases are an ornate Parisian interpretation of the classical rhyton form, originally a type of drinking cup. The pair, dating to the second quarter of the 19th century, sold for $1,045 in early October. Courtesy New Orleans Auctions Galleries.

Miami school getting an advanced degree of restoration
Scroll to top