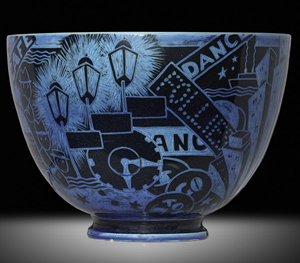 An excellent example of the “Jazz” punch bowl, made 1929 by Viktor Schreckengost at the Cowan Pottery in Cleveland, will be sold next weekend at Rago Arts in Lambertville, N.J. – estimate $40,000-$60,000. Courtesy Rago Arts and Auction Center

The “Jazz” bowl created by Viktor Schreckengost (1906-2008) is an acknowledged icon of American Art Deco, summing up in a single object the spirit of an exciting era. Although this object may now be the best known of his works, the prolific artist enjoyed a long career as an industrial designer and influenced future generations through 50 years of teaching at the Cleveland Institute of Art.

Born into a family of ceramic workers in 1906, Schreckengost began his long association with Cleveland when he moved to the city to study art in 1929. An artistic turning point came when he saw the work of Michael Powolny in an exhibition at the Cleveland Museum of Art and earned a scholarship to study with the European artist at the Kunstgewerbeschule in Vienna.

Some of his earliest designs, including the “Jazz” bowl, were made for the Cowan Pottery in Rocky River, a town on Lake Erie east of Cleveland. The pottery had opened in 1884 but closed in December 1931 as a result of Depression economics. Schreckengost went on to found the department of Industrial Design at the Cleveland Institute of Art and remained on the faculty until his death.

Yet he remains best known for the porcelain he produced at the Cowan Pottery when he was in his twenties. Under “Ceramics” in the classic reference American Art Deco, author Alastair Duncan’s writes, “ Schreckengost’s own recollection serves best to trace the events leading to the creation of his ‘Jazz Bowl,’ a period masterpiece which captured the dazzling mood of the early 1930s in a montage of skyscrapers, musical notes, cocktail glasses, gas lamps, and champagne bubbles.”

Duncan goes on to quote the artist’s memories recorded in a 1983 Plain Dealer interview: “They had a customer – ‘a lady in Albany’ is all they said – who wanted a punch bowl ‘New Yorkish’ in effect. New Yorkish! Now, that really piqued my interest and I imagined what the city meant to me. I always felt New York was most exciting at night when it had a funny blue light over everything and great jazz bands were playing everywhere, Ozzie Nelson, Cab Calloway.”

The Cowan Pottery customer turned out to be Eleanor Roosevelt whose husband had just been re-elected Governor of New York prior to his 1932 run for President. Among the cocktail glasses and tall buildings, the pattern features a number of signs including a circular medallion with the word “Jazz,” which has given the pottery line its name. The future First Lady liked the resulting design so much that she ordered several more.

The total number of these large punch bowls (H. 11 ½’, D. 16”) produced is unknown; many have been lost or destroyed. Designs were incised by hand, highlighted in black slip, and covered with an overall Egyptian blue-green glaze that varies slightly in hue. A slightly shorter bowl with flared rim decorated with the same design was also made. An equally lively “Jazz” dance design is found on a series of wall plaques.

David Rago, president of the Rago Arts and Auction Center, is enthusiastic about the upcoming sale: “I can talk to you about the Jazz bowl for three days, if you want. It’s one of the most significant pieces of American pottery in the first half of the 20th century. There are different ways of looking at it. On the one hand, the bowl stands on its own as a work of art by a master. But it also says a great deal about what happened to American ceramics when the Art Pottery movement died and the Studio Pottery movement kicked in.”

Rago continues, “They’re all a little different because they are done by hand. You put them side-by-side, you’ll see slight variations – which is great. What makes this one special is that it may be the last one in private hands.” Other examples have entered permanent collections at museums, including the Jazz punch bowl sold in Rago in October 2010 for $158,600. Another sold at Sotheby’s in 2004 for over a quarter million dollars.

Price variations are often due to condition; Rago notes that the bowl shape is easily damaged. For the example coming to auction, he says, “The condition is almost perfect. It’s super clean, very crisp, and new to the market. If a museum – or a private collector -wants an iconic example of American Art Deco pottery, this may be the last chance to acquire it.“ View the bowl and complete catalogue at www.ragoarts.com.

Collectors who do not have six-figures to spare should note that other Schreckengost ceramic designs sell at very reasonable prices. He created a variety of patterns for dinnerware and modeled lines of figurines depicting circus performers and sports figures. See what is available in the Schiffer’s Viktor Schreckengost Designs in Dinnerware by Jo Cunningham.

The best reference for an overview of the designer’s diverse output is Viktor Schreckengost: American Da Vinci by Henry Adams. In 2006, the designer – at the age of 100 – was awarded the National Medal of Arts by President George W. Bush. The Cleveland Museum of Art contains an important collection of his work including an example of the “Jazz” bowl.

Click to view the fully illustrated catalog and sign up to bid absentee or live via the Internet through LiveAuctioneers.com in Rago’s June 16-17 auction featuring a 1929 Schreckengost Jazz bowl. 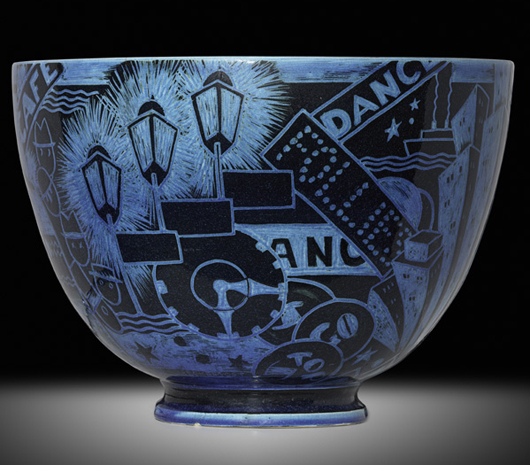 An excellent example of the “Jazz” punch bowl, made 1929 by Viktor Schreckengost at the Cowan Pottery in Cleveland, will be sold next weekend at Rago Arts in Lambertville, N.J. – estimate $40,000-$60,000. Courtesy Rago Arts and Auction Center 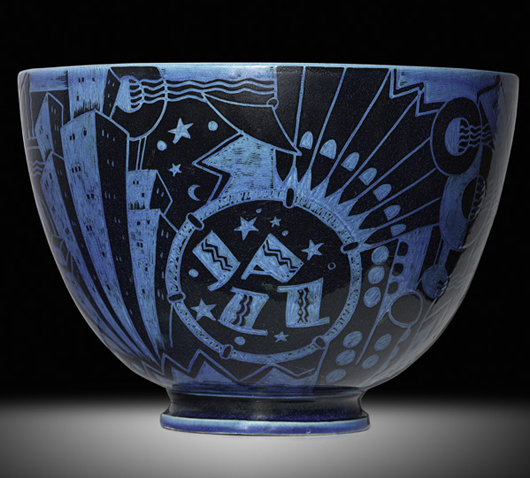 Motifs circling the large bowl evoke the pleasures of nightlife in New York. The sgraffito design was highlighted in black slip and then covered in a transparent Egyptian blue glaze. Courtesy Rago Arts and Auction Center 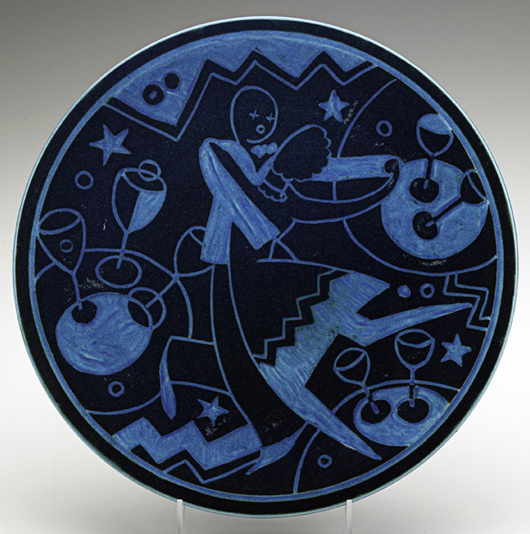 On the designer’s “Jazz” plate or plaque, an animated couple hit the nightclub dance floor. This example brought $17,500 in February; another version sold April 2008 for $66,000. Courtesy Rago Arts and Auction Center 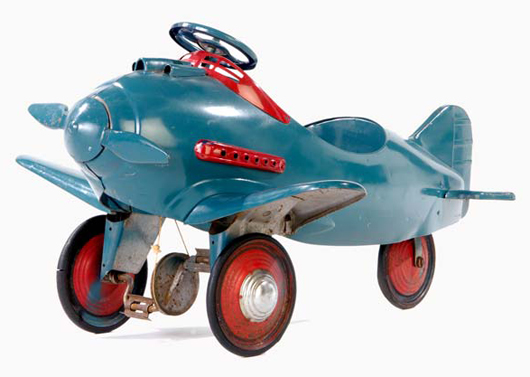 This pedal car in the form of an airplane was part of a series Schreckengost designed in the 1950s for bicycle manufacture Murray Ohio. The delightful toy came up five years ago at Rago’s where it sold for $3,360. Courtesy Rago Arts and Auction Center