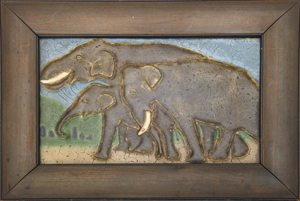 This rare horizontal Grueby tile features an incised and embossed scene of a family of elephants, covered in polychrome matte glazes. The example, mounted in a period Arts and Crafts frame, sold in June 2009 for $26,400. Courtesy Rago Arts and Auction Center

During the Arts and Crafts period at the turn of the 20th century, Grueby in Boston produced elegant and organic handmade pottery that won medals at home and abroad. Now that the art pottery market has settled back down to earth from the extremely high prices of five or 10 years ago, excellent examples of Grueby vases and tiles are once again affordable acquisitions for collectors.

Although the vases made later in his career have received the most attention, William Grueby (1867-1925) started out as a manufacturer of glazed tile and architectural elements, established in 1894 as the Grueby Faience Co. Glazed terra-cotta tiles, brick, and revetments were a popular building material for interior and exterior use at the time. The material was colorful, durable and “hygienic,” or easily cleaned. Grueby had learned tile production and glazing while working for the J. & J.G. Low Art Tile Works in Chelsea, Mass.

In 1897, Grueby began to make art pottery for interior decoration, spurred on by his interest in experimental glazes. The forms – vases, bowls and lamp bases – were thrown by hand and then decorated with leaf-like organic patterns carved into or applied onto the surface. As a result of these techniques, pieces are never precisely alike, although many are variants of a repertoire of basic shapes. Artistic inspiration came from a succession of excellent designers including George Kendrick, Addison LeBoutillier and Julia Bradley. Women graduates of art schools in the Boston area executed the designs on individual pieces.

The most notable glaze was a velvety matte green that was a perfect fit for the organic shapes of the pots. Grueby forms can also be found glazed in yellow, dark and light blue, brown, mauve and pale oatmeal. The pottery enjoyed considerable critical success, winning medals at international competitions including the Paris Exposition Universelle of 1900 and the 1904 Louisiana Purchase Exposition in St. Louis. Success brought imitation by competitors in the highly volatile market for such wares, and art pottery production by Grueby stopped in 1909. Tile production, however, continued until 1919, and Grueby architectural terra-cotta was installed in buildings across the country.

When collectors are selecting Grueby pottery, a number of factors regulate the value of individual examples, such as quality and color of the glaze and the design and complexity of the form. For example, buyers pay a premium when flowers or buds between the green leaves on vases are highlighted in a lighter color. In the most desirable forms, applied tendrils form “handles” around the neck of a vase. Another special product line was the lamp bases that Grueby produced for Tiffany and other firms; the combination of fine glass shade and sculpted base often bring prices in the five-figure range. Factory marks on the bottom of each piece may include the mark of a decorator as well as the company’s logo.

Public and private collections scrambled to secure the best examples of Grueby in the heated marketplace of the last few decades. Singer Barbra Streisand was a fan of the pottery. When Christie’s New York sold her Arts and Crafts collection in 1999, a Grueby vase with white-tipped blossoms brought $29,900. In a 2004 auction at Sotheby’s, another two-color vase, almost 15 inches in height, sold for $136,800, and a matte green vase with tendril handles for $78,000.

Grueby has also starred in the Craftsmen Auctions produced by art pottery expert David Rago and Jerry Cohen in Lambertville, N.J. In 2006, a lamp base with glass shade by Bigelow, Kennard & Co. of Boston sold for $45,000, a Grueby/Tiffany lamp brought $24,000 in 2007, and another went for $36,000 last year. A large George Kendrick-designed vase in a matte green glaze sold for $24,000 in 2006. A special Grueby tile decorated with elephants brought $26,400 in June.

In spite of these daunting prices, collectors can be encouraged by the fact that Grueby also made simpler vases and tiles that can be picked up for less than $2,000.

“I think it’s definitely a good time to buy Grueby,” said David Rago. “There’s material out there, being offered. I’ve got a bunch of Grueby coming up in my January sale. They’re in at lowball prices.” The recession has affected the art pottery market in general, and many people have already acquired their dream pieces.

“A lot of pieces are now in personal or museum collections,” continued Rago. “There’s been a 40-year revival, and people who wanted specific forms have them. Unless something really unusual comes along, it’s not going to bring a whole lot of money. But there are a couple of pieces of Grueby out there that would bring in the six figures if they came to market. A good handled tendril vase in mint condition is probably still a $50,000 to $75,000 piece.”

“The irony about Grueby is that they’re all one of a kind pieces – they’re hand-thrown pots – but they repeated ideas. If you put 20 examples of the same idea side by side, you see the subtle differences. They had maybe 40 basic forms that they repeated. The proportions and details will be slightly different. So, if you have an example of that idea, you probably don’t want another one.”

As far as glazes are concerned, Rago said, “Buyers tend to prefer the green but they’ll consider the yellow and the soft blue. Grueby is pretty much a green pottery. And they were the best tile makers in the country. You find them in California, New England, Texas. One thing I would stress, people should not expect for Grueby to have to be perfect. The nature of the beast is that it’s low-fired ware, tends to be a little soft. It’s not molded, so the high points of the decoration are crisp. It can nick very easily. Minor damage on Grueby has literally no effect on prices.”

Frank Kaminski an auctioneer in Beverly, Mass., agrees. “We’ve had some wonderful pieces of Grueby naturally, being in the Boston area. I think it’s a good time to buy Grueby pottery. Unless it’s something very exceptional in form or multicolored, prices for average pieces – beautiful pots – are down. A couple of auctions ago we sold a multicolored piece for $1,800, which I thought was a good buy. Our next auction on Nov. 28-29, we have quite a large grouping of art pottery, including pieces of Grueby,” he said.

Kaminski came up with an exceptional find, a rare Grueby fireplace surround originally installed in a Maine bank building, which the firm sold in August 2005 for $32,000. The grouping of green tiles featured a central ship image and 12 elaborate corbels, which support the mantel. The installation is now in the Two Red Roses Foundation in Florida, an important collection formed by Rudy Ciccarello who is a great fan of this pottery. Collectors can view part of his collection – including Grueby and other art pottery – in A Spirit of Simplicity: American Arts and Crafts from the Two Red Roses Foundation at the Flagler Museum in Palm Beach, Fla., through Jan. 3.

“When you get an unusual shape with nice handwork on it, it pushes it up to a different level. Different colors make a difference. Traditionally, the green is a big deal, but to my way of thinking, if you find a blue or a cream or yellow with nice work on it, or a multicolored piece with different colors, red in particular, it makes it really special.

“They are generally thrown vases that have carved handwork. Sometimes there is another color added to a flower tip. The more elaborate ones, the ones that bring huge amounts of money, will have quite a bit of added color. Look for solid green with nice carving on it. And a step up would be the same piece with a little color. And the rarified atmosphere would be something really spectacular with larger size, great glaze, great carving, and great color – those can command a lot of money,” said Humler.

“What people don’t appreciate is that everybody was watching everyone else in that time frame,” Humler continued. “Grueby wasn’t necessarily the only innovator of intricate forms. Grueby was doing some things based on what they saw in Europe and other people were watching Grueby and copying them. It’s hard to tell who came first.”

The organic forms executed by the decorators at the Grueby Pottery make them perfect for small groupings. The tendrils and floral forms spring up like a garden on an oak Arts and Crafts table. Seize the market opportunity and buy an elegant lamp or cluster of vases while prices are low. 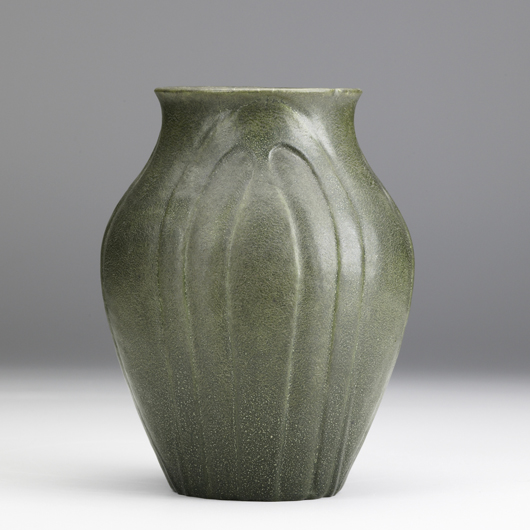 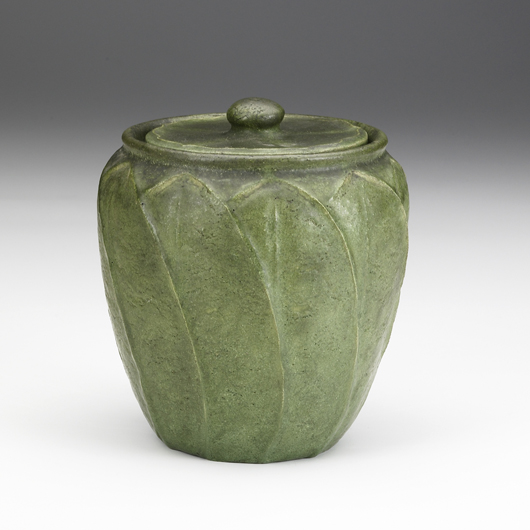 A rare matte green Grueby humidor decorated with stacked leaves has an estimate of $2500-4500 in an upcoming sale. Courtesy Rago Arts and Auction Center 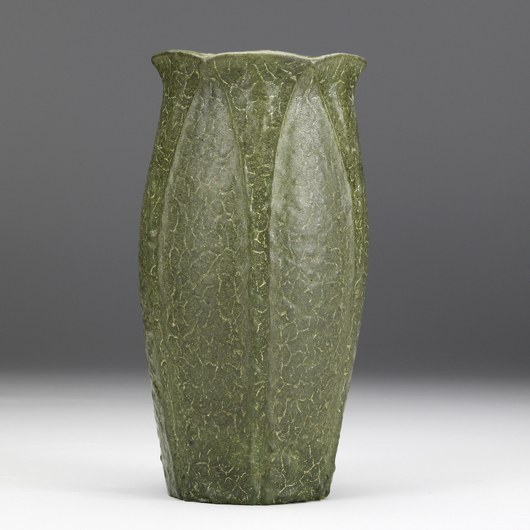 To be sold in January, a Grueby vase decorated by Ruth Erickson has an alternating pattern of leaves and buds covered with a thick green glaze (estimate $4000-6500). Courtesy Rago Arts and Auction Center 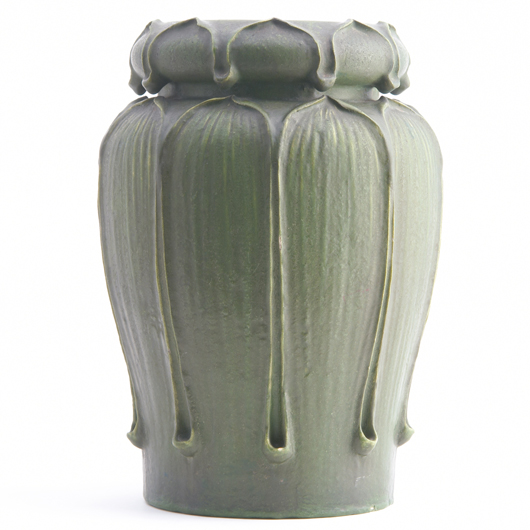 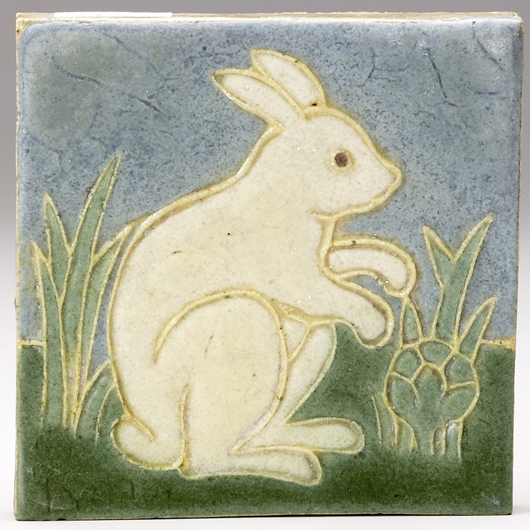 A decorative Grueby tile with an ivory rabbit in a cabbage field sold in September for $1159. Courtesy Rago Arts and Auction Center 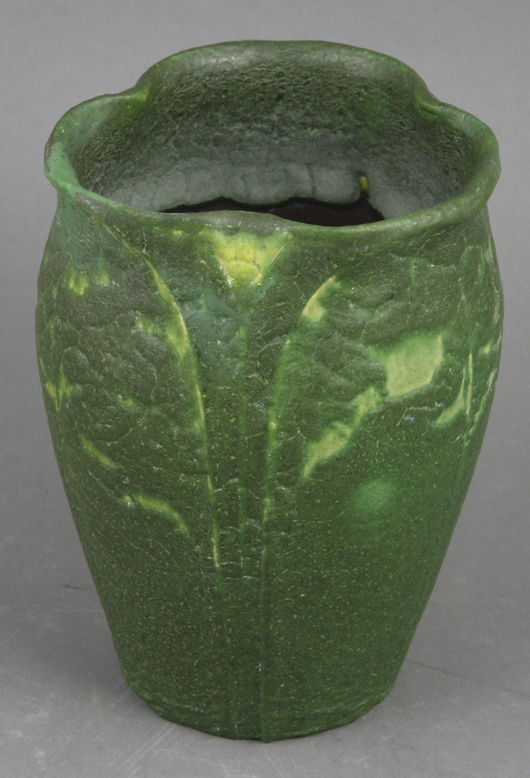 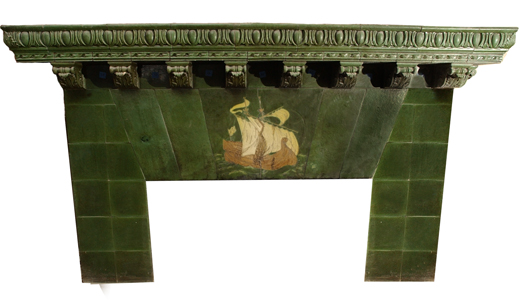 This rare Grueby fireplace surround was originally installed in a Maine bank building and sold in August 2005 for $32,000. The tiles include a central ship image and 12 elaborate corbels which support the mantel. The installation is now in the art pottery collection of the Two Red Roses Foundation in Florida. Courtesy Kaminski Auctions 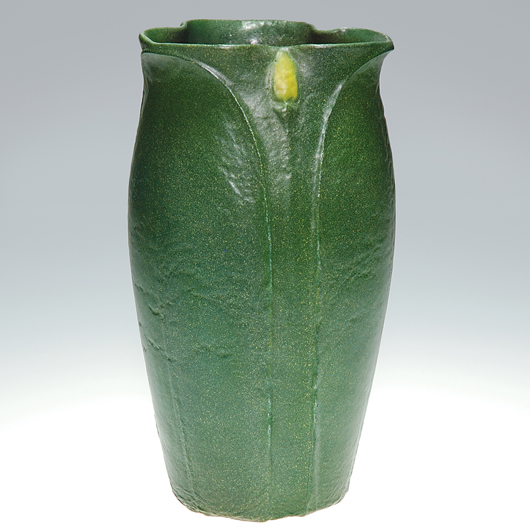 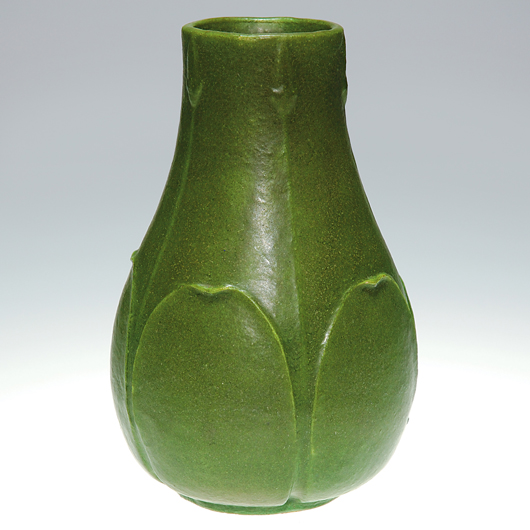 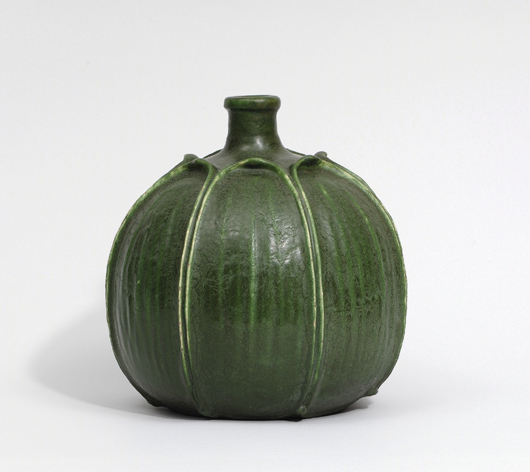 This rounded Grueby vase, circa 1900-1909, is on display in the exhibition titled A Spirit of Simplicity: American Arts and Crafts from the Two Red Roses Foundation, running through January 3, 2010 at the Flagler Museum in Palm Beach. Courtesy Flagler Museum.

Vets get free admission to Maine museum
Scroll to top