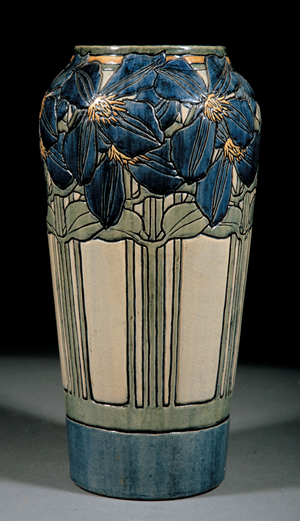 NEW ORLEANS – “Women, Art, & Social Change: The Newcomb Pottery Enterprise” presents the largest comprehensive exhibition of arts and crafts from the famous New Orleans college workshop to tour the country in thirty years. The highly sought-after art pottery is placed in the context of other crafts practiced at Newcomb – textiles, metalwork, jewelry, bookbinding and works on paper. At the same time, the traveling exhibition focuses on the transformative role art education played in the lives of Southern women.

The exhibition was organized by Sally Main, senior curator of the Newcomb Art Gallery at Tulane University, in partnership with the Smithsonian Institution Traveling Exhibition Service. Following an initial run in New Orleans, the show will be on display at the Georgia Museum of Art in Athens May 17 to Aug. 31 and continue touring to other institutions for the next three years.

An added bonus for collectors was the publication of a groundbreaking new volume, The Arts and Crafts of Newcomb Pottery (Skira Rizzoli 2013) with contributions from Sally Main, Ellen Paul Denker, Martin Eidelberg, David Conradsen, Adrienne Spinozzi and Kevin W. Tucker. The attention focused on Newcomb by the book and exhibition resulted in strong prices for the art pottery in recent auctions and encouraged buyers to seek out other decorative arts made at the college.

In an interview with ACN, Sally Main explained, “This Newcomb show introduces people to the other crafts. Everybody knows the ceramics, but the other pieces are just as beautiful – these women were amazingly talented. The textiles were important to me, to get them out and introduce them to people, because the textiles were second only to pottery in sales, and they’re absolutely beautiful. The juxtaposition of colored threads makes them glow. The textiles look like pointilliste paintings.”

She continued, “Then the metalwork and jewelry were stunning. The proficiency with which they executed these things belied how new they were to the craft itself. They were doing extraordinary things.” The metalwork classes were so successful that they went coed, when Mary Williams Butler allowed male students from the Tulane School of Architecture to take instruction. At the time, William Spratling was teaching architecture at Tulane; he learned skills there that he later used in his famous silversmithing project in Taxco, Mexico.

Founded in 1886, Newcomb College was an experiment in educating women side-by-side with the male students at Tulane. The curator pointed out, “Another experiment was the idea that you educate women in the arts to give them an opportunity to achieve economic independence. Women could get married, or become teachers, or open their own shop. The college opened a door that wasn’t there before.” Newcomb arts and crafts were sold to the public then, and the objects created – led by the desirable art pottery – continue to appeal to the public today.

Newcomb students looked around them for inspiration when they picked up their brushes; the pottery emphasized the flora and foliage of the South as well as evocative moonlit landscape scenes. The appeal of these designs was demonstrated when the Neal Auction Co. sold a 1904 vase decorated by Marie de Hoa LeBlanc with an incised design of Jackmanii Climbing Clematis for a world record price of $169,200 in 2009 and a 1908 vase with a circle of pine trees decorated by Leona Nicholson in 2007 for $67,000.

At Neal’s Louisiana Purchase auction last November, shortly after the Newcomb exhibition’s opening, a large high-glaze vase, decorated with calla lilies by Mary Williams Butler in 1902, brought $35,850, and a 1902 vase with stylized foliage by LeBlanc sold for $21,510. Entry-level collectors were able to pick up smaller vases from the 1920s and 1930s for prices in the $2,500-$3,500 range. Interest in Newcomb art pottery extends far beyond New Orleans. Rago Auctions in Lambertville, N.J., has sold many examples in the past 15 years for five-figures including an 1902 LeBlanc vase circled with stylized rabbits for $84,000 in 2006.

Amanda Mantle Winstead, senior appraiser of Fine Arts at Neal, also runs her own art consulting firm and is a graduate of Newcomb College. She emphasized that prices depend very much on what comes up for sale: “You have different levels based upon the very distinctive periods of Newcomb. You can talk about the early high-glaze pieces, then you have a sort of transitional period when they’re going into the landscape design that is so identified with Newcomb, then you get into a period of floral decoration when they’re really producing a lot of pottery. The high-glaze period is at the forefront of the Arts and Crafts Movement and stylistically is different from later periods – different glazes, different designs, different palette. There was not as much produced so there is not as much in the marketplace. That is still your high point in terms of value.”

She noted that the record price in 2009 for the clematis vase by Marie de Hoa LeBlanc resulted from a combination of factors: “It was beautifully carved and modeled – it had a lot of dimension to the surface of the pot. And then the glaze coupled with that made it so strong aesthetically. The size was big, the condition was perfect – everything came together. And that day you had the right people bidding on it – an institution, a dealer in New York, and a very aggressive private collector in New Orleans. It was definitely an A+ vase.”

“It’s all about the collectors and what they’re looking for,” she added. “I’ve worked with many collectors over the years, and they seek out certain designs and periods. Some want the best examples of landscape vases from the 1910s and 1920s. They don’t even look at the high glaze – that’s not the aesthetic they’re interested in. These vases are also very desirable, so the bottom range is $2,500-3,000, while a great large landscape vase might be $15,000-$20,000. There are variations in the designs, for example, palm trees with the moon is really unusual.”

Winstead concluded, “The exhibition absolutely has increased interest in Newcomb works. The installation at the Newcomb Art Gallery was gorgeous, fabulously presented with the textiles, and the metalwork, and the china decoration all in one exhibition. And the book is incredibly well done. Anytime you have this kind of exhibition, it can only help, and we’ve seen new registered bidders. Looking to the future, the more exceptional the pot, the more money it will bring.”

Search catalogs for past and future offerings of Newcomb Pottery at www.nealauction.com or at the LiveAuctioneers website. 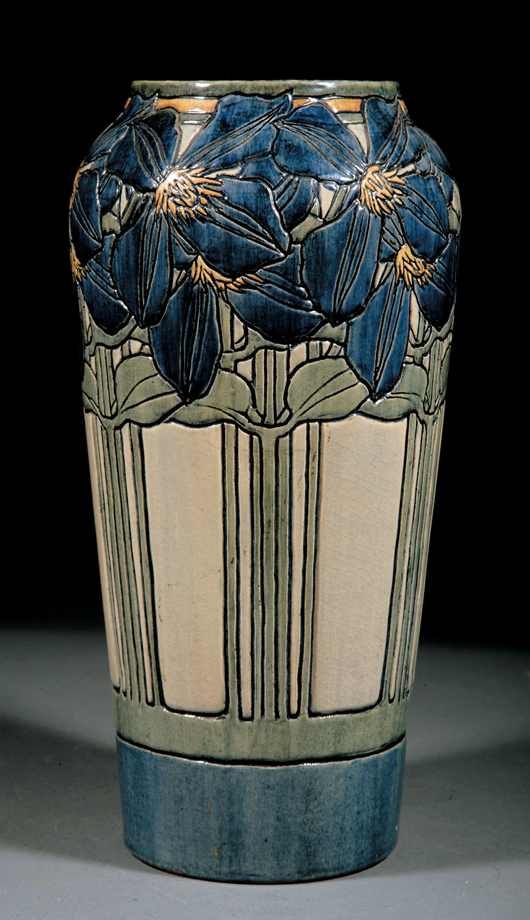 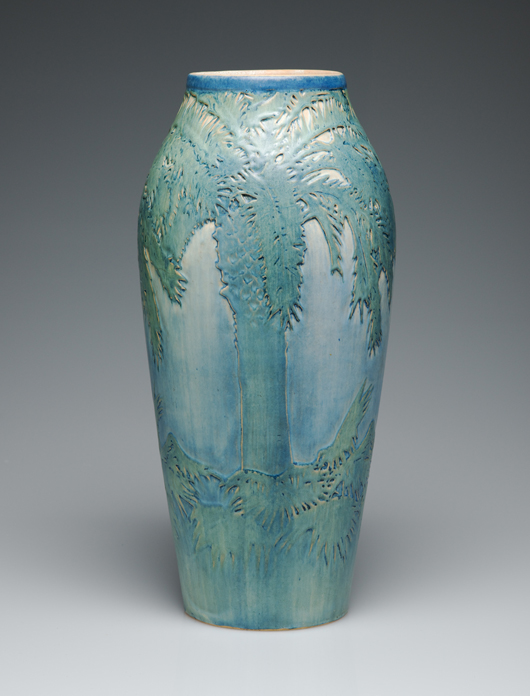 ‘Women, Art, & Social Change,’ a traveling exhibition organized by the Newcomb Art Gallery, unites the famous art pottery, such as this exquisite palm vase by an unknown decorator, with the textiles and metalwork created by women at the college. Courtesy Newcomb Art Gallery; collection of Don Fuson. 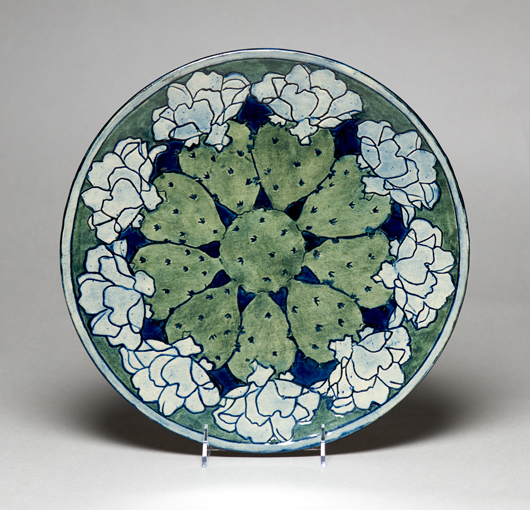 From the exhibition, this rare plate was decorated with an overall cactus design around 1903 by Newcomb College student Harriet Joor. As usual, resident potter Joseph Meyer created the clay form, which was incised, painted, and finished with a glossy glaze. Newcomb Art Collection, Tulane University 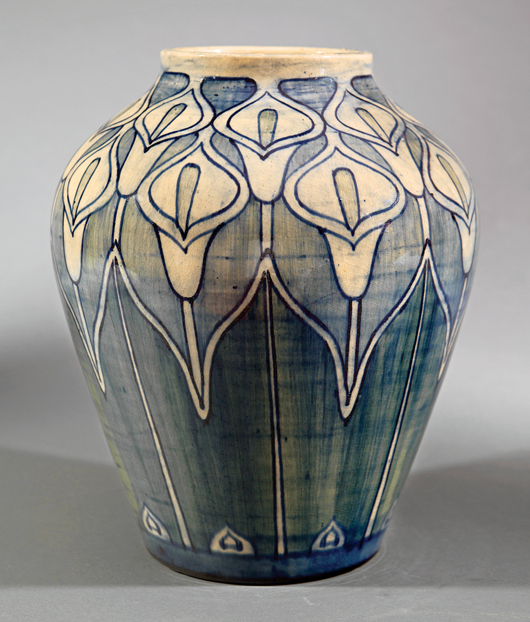 The resurgence of the market for Newcomb was apparent last November when this large high-glaze vase, decorated with calla lilies by Mary Williams Butler in 1902, brought $35,850. Courtesy Neal Auction Co. 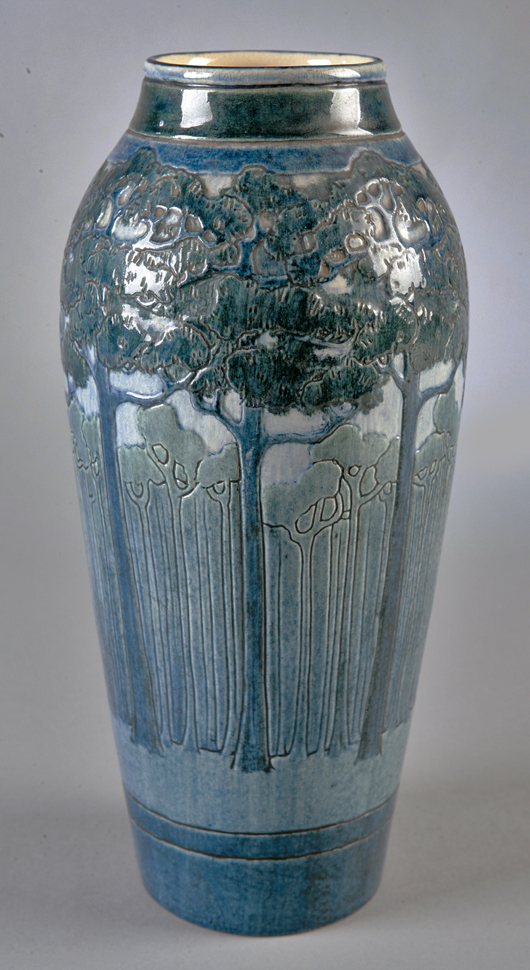 A 1908 high-glaze vase with a circle of pine trees decorated by Leona Nicholson is an excellent example of how carving and modeling was used to add depth to the painted design; this vase doubled its estimate to bring $67,000 in 2007. Courtesy Neal Auction Co. 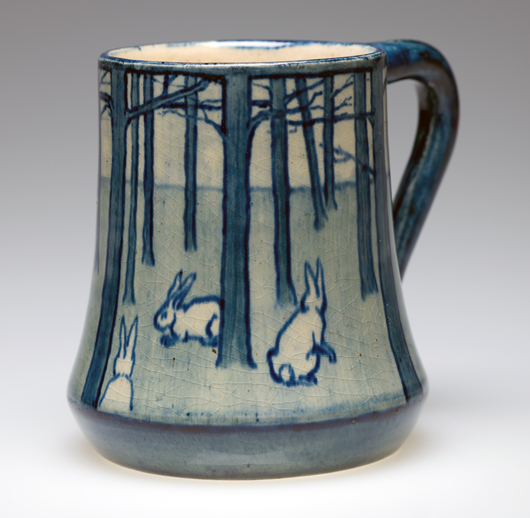 Sisters Amelie and Desiree Roman were members of the Saturday drawing classes for women, which began at Newcomb in the 1880s. Amelie enjoyed considerable success as a decorator – she painted this delightful rabbit mug around 1902 – and went on to teach at the college. Courtesy Newcomb Art Gallery; collection of Caren Fine. 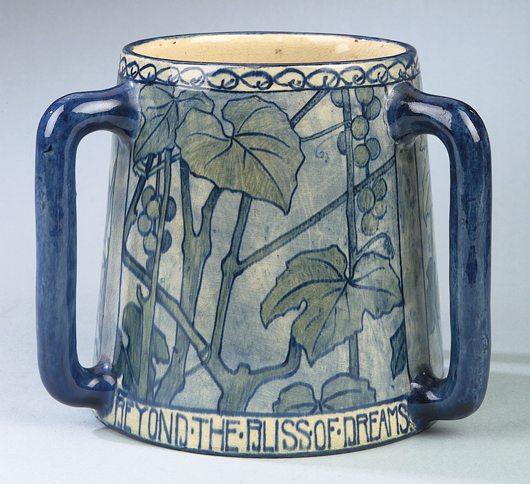 A rare form, this high-glaze handled tyg, decorated circa 1900-1901 by Amelie Roman, sold for $22,325 in 2005. The inscription reads: ‘One Sip of This Will Bathe The Drooping Spirits In Delight Beyond The Bliss of Dreams.’ Courtesy Neal Auction Co. 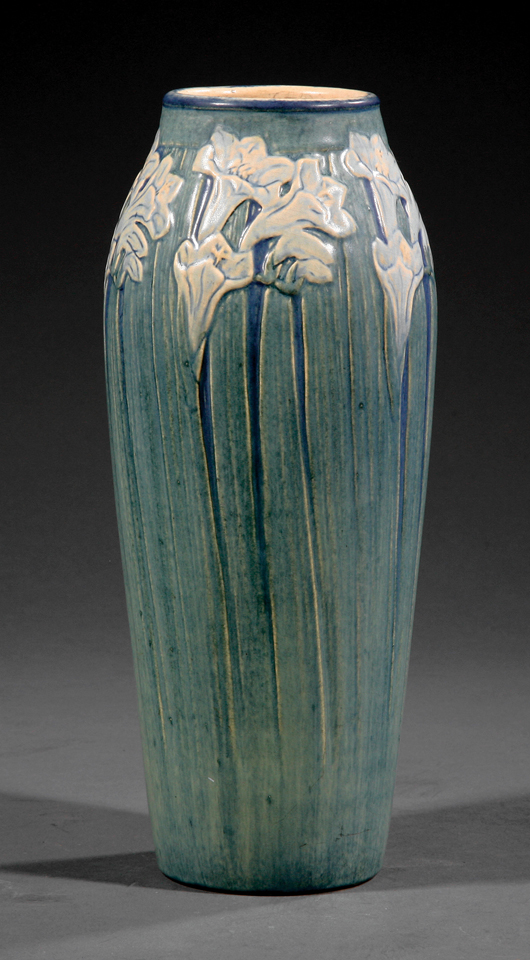 A Newcomb Pottery floral vase decorated by Anna Frances Simpson, 1911, will be among the offerings in the April 25-27 auction at the Neal Auction Co. in New Orleans. Courtesy Neal Auction Co.