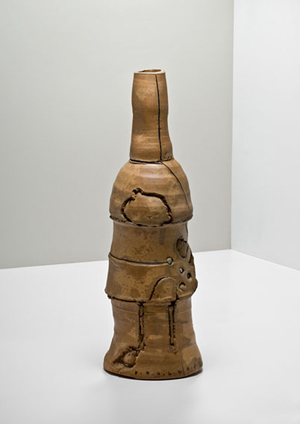 At the first Cowan’s+Clark+Delvecchio Auction in the fall of 2010, this ‘Gash’ stoneware stack pot made in 1978 sold for $105,750, a record for Peter Voulkos’ pottery. Shown in two important exhibitions during the ceramist’s lifetime, the abstract reworking of a classical caryatid form – 48in high – is comprised of four distinct sections. Courtesy Cowan’s+Clark+Delvecchio Auctions

CINCINNATI – Values are rising for masterworks by ground-breaking artist Peter Voulkos (1924-2002), but collectors still can find representative pieces made during his prolific career at many price points. Among many Voulkos lots in the May Cowan’s+Clark+Delvecchio Auction in Cincinnati, a signed 1957 vase, which had been exhibited at the potter’s 1995 retrospective in Japan, sold for $24,000, and a signed stoneware sculpture with an incised and painted surface, also from 1957, brought a strong $33,600.

Born in Bozeman, Mont., to Greek immigrant parents, Voulkos began his art studies in his home state and went on to receive an MFA from the California College of Arts and Crafts in Oakland. He spent much of his life teaching others, first at the Los Angeles County Art Institute, now the Otis Institute of Art and Design. Most notably, he established the ceramics department at the University of California, Berkeley, where he taught from 1959 to 1985.

The potter was pursued by many of the same demons that hinder other great artists, but throughout his life, he continued to turn out carefully crafted pottery in his unique style. Plates of varying sizes were a favorite form—he was a master at turning pieces on the wheel—and he may be best known for his cylindrical “stack pots,” which often bring the highest prices for his work at auction. He made a late-life foray into bronze-casting sculpture in the stack pot form, examples of which are in the collection of Grounds for Sculpture in Hamilton, N.J.

Earlier this month at a Rago Modern Auction in Lambertville, N.J., a circular stoneware charger with glazed details (D. 20 inches) —signed and dated 1987—sold for $8,750. David Rago commented later, “Voulkos was to clay what the abstract expressionists were to canvas. Voulkos had his issues, usually revolving around women and liquor. But then, he was flesh and bones after all. What I found interesting is that his later work, that done within a decade of his death, seemed to improve on things he’d done 10 to 15 years earlier. Certainly some of his germinal abstract expressionist work in the ’60s is serious stuff, and I’m not saying that he didn’t create masterpieces in the ’70s and ’80s. But I tracked him while he was still alive, and he just seemed to get stronger as an artist.”

Ceramics expert Garth Clark has written excellent catalog entries to accompany the important works by Voulkos offered in the Cowan’s+Clark+Delvecchio Auctions. In a recent interview with this columnist, he analyzed recent sales: “Overall his market is very strong. From 1956 onwards, he has a sort of sculptural art vision of where he wants to take pottery. He was influenced by several things; one was Japanese potters who worked in that form. But he was also influenced by the Abstract Expressionists—and that started him off in a new direction.”

Until recently, he continued, “Nobody paid much attention to his early work, from 1949 through up to 1956-57 when his work became radicalized. But prior to that, he made the most beautiful classical pots and he made mainly functional pots during that period. They are exquisitely thrown. In Voulkos’ first year of doing pottery, he was throwing as well as somebody who had spent five or six years doing it. He had an instant gift on the wheel – and the ability to manipulate clay on the wheel and really throw beautiful pots can take years and years for a potter to get to that point. Voulkos burst on the scene with his amazing pots, perfectly thrown —that was a very precocious talent that he had.”

Clark pointed out that, when his work changed in the mid-1950s, he still carefully controlled the results: “Those pots that look so rough—to throw them requires great skill. He would throw a perfectly formed pot, then alter it so it became less so. Everything he did was on the wheel, and then once it was thrown, then he’d start altering it and cutting it and pushing holes through and shifting the piece so it was more asymmetrical. Now people are paying attention to the early pots as well. For the longest time, nobody was interested because they wanted his ‘art work’ from 1956-57 onwards.” He added that some of these early works had done well in the Cowan’s sales, bringing prices in the $2,000-$7,000 range.

In addition to the distracting demons, Voulkos had a brash public persona, which contrasted sharply with the more thoughtful artist that good friends connected with in private. Clark noted, “He was not good at marketing. He did a lot of things that were self-defeating and had very few major dealers during his career. He did things that damaged his marketability. Because he didn’t handle the business side of things very well, dealers were a little reluctant to work with him. So during his own lifetime, I don’t think he achieved the prices he should have. And I think that’s what now makes him attractive—people realize that he one of the top ceramicists of the 20th century. So collectors are starting to come into the market and begin to look for his work.”

In fall 2010, Clark wrote eloquently about a 1978 Voulkos stack pot named “Gash” that sold for a record $105,750 at Cowan’s: “Beginning with its forceful title, this piece is about the innate power of the stack pot. It has four distinct volumes. The first three, which are tightly thrown, thick-walled and unlike some stacks barely diminish in width as they rise, give the vessel a solid, stoic stance. A long thick neck rises from the center of this totem, an assertive column that does not narrow at the top, holding on to its power to the end. The middle of the neck has a beautiful moment when the wall pulls inward then swells out, voluptuously and sensually, pushing the eye upward to the climax of the rim. This is Voulkos’ throwing at its most seductive.

“The surface is no less compelling. Vertical and horizontal lines with their interstices rubbed with manganese oxide create an almost geometric framework for this organic jar. Some lines end with a piece of porcelain that has been pushed through the clay, a punctuation point. Vying for attention is the deep cut that circles the bottom of the neck and then soars upward visually dissecting it in half. Meandering through the pot, almost a form of automatic drawing, are more free-form cuts where the artist seems to be listening to the clay, letting it direct his knife. But it is the cut in the third tier that gives this stack pot its title, Gash, cut all the way through, removed and then replaced into the vessel …”

He concluded the entry, “It stands with the self-importance of a Greek classical caryatid, not the artist’s goal—indeed he tried to suppress figurative associations—but, as is often the case with pots, the anthropomorphism remains insistent. This pot, a record of a loving and transforming assault on shape and surface is, in short, a masterpiece.”

Collectors will continue to scour auction listings, using their own judgment to separate the attractive from the irresistible. But when the most eloquent works, large or small, come up in sales, expect future prices to continue to reinforce the importance of Peter Voulkos’ creations in the history of ceramics. 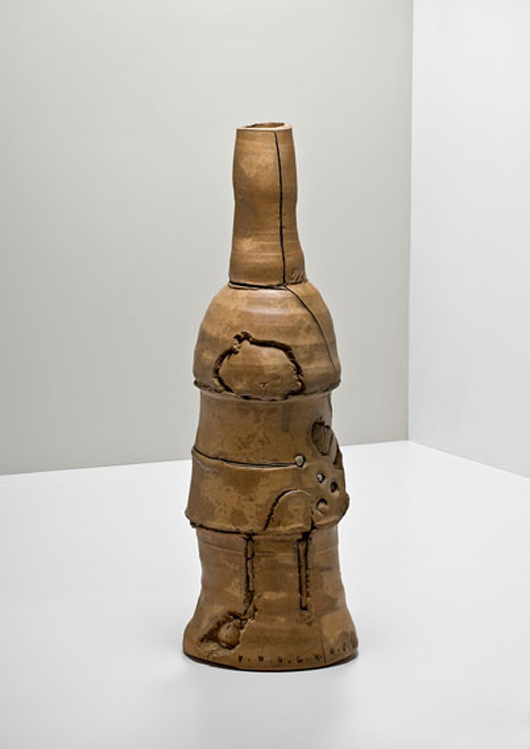 At the first Cowan’s+Clark+Delvecchio Auction in the fall of 2010, this ‘Gash’ stoneware stack pot made in 1978 sold for $105,750, a record for Peter Voulkos’ pottery. Shown in two important exhibitions during the ceramist’s lifetime, the abstract reworking of a classical caryatid form – 48in high – is comprised of four distinct sections. Courtesy Cowan’s+Clark+Delvecchio Auctions 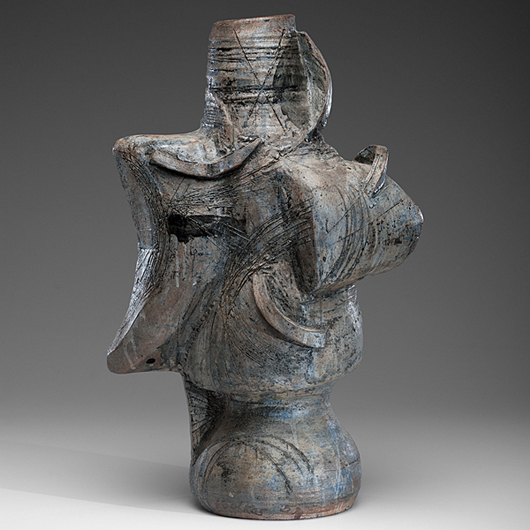 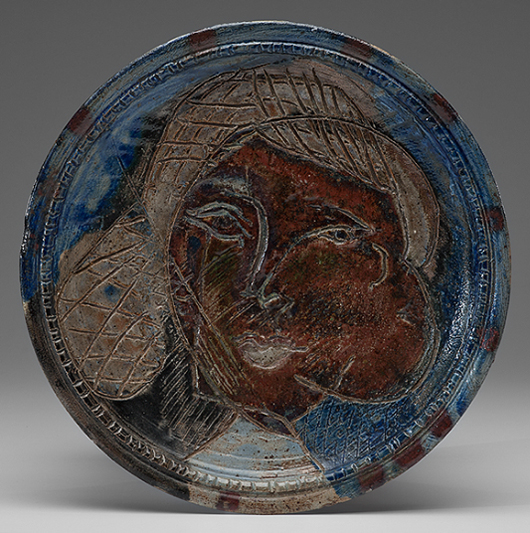 A rare early work by Voulkos, this portrait charger incised with portrait of a woman was made around 1952 at the Archie Bray Foundation in Helena, Montana; the stoneware plate brought $3,000 at Cowan’s in May. Courtesy Cowan’s+Clark+Delvecchio Auctions 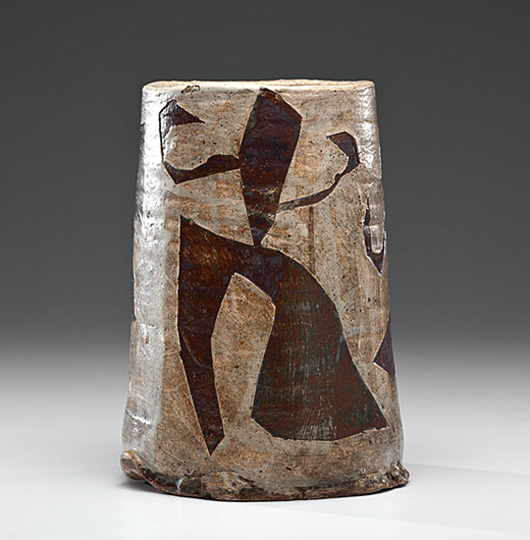 In the mid-1950s, Voulkos experimented with using stencils to created raised abstract figural designs in the glaze of his pots. This signed 1957 vase, which had been exhibited at the potter’s 1995 retrospective in Japan, sold for $24,000 at Cowan’s in May. Courtesy Cowan’s+Clark+Delvecchio Auctions 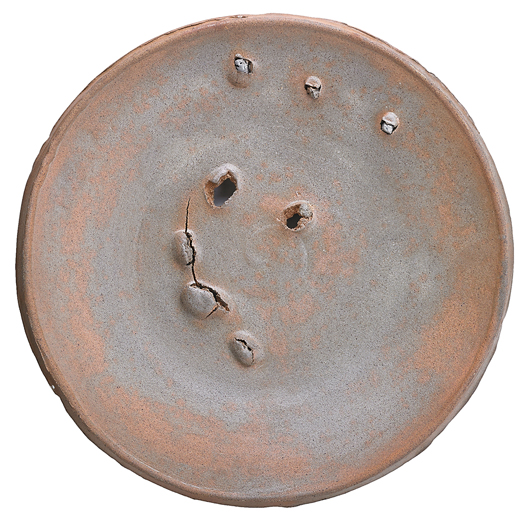 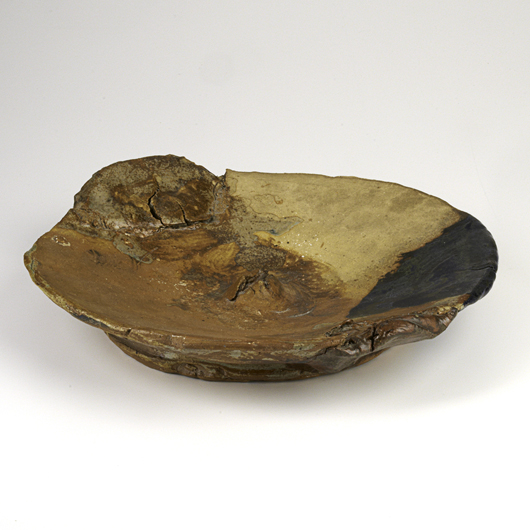 This early glazed stoneware platter – ‘D. 14’ – was signed and dated 1962. The volcanic energy of the work helped the lot realize $11,250 at a Rago Auction in February 2012. Courtesy Rago Auctions 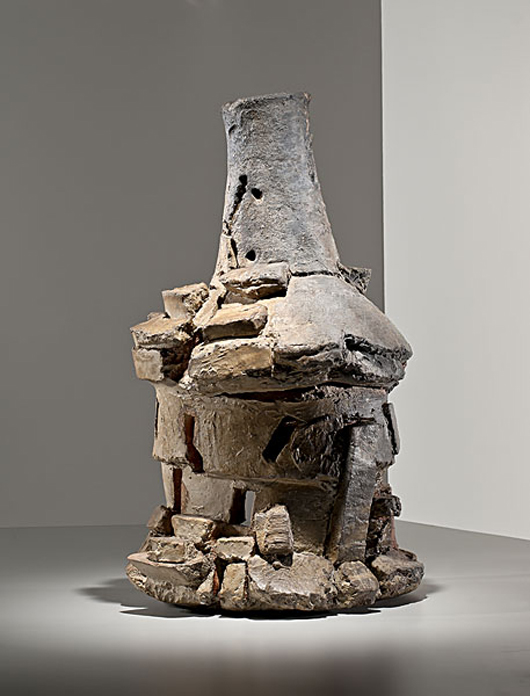 Carefully constructed to look like it might collapse, this stack pot titled ‘Siguirilla’ was made in 1999, late in Voulkos’ career, and sold for $77,550 at Cowan’s in November 2011. The name for the gravity-defying composition is taken from the vocabulary of flamenco guitar. Courtesy Cowan’s+Clark+Delvecchio Auctions 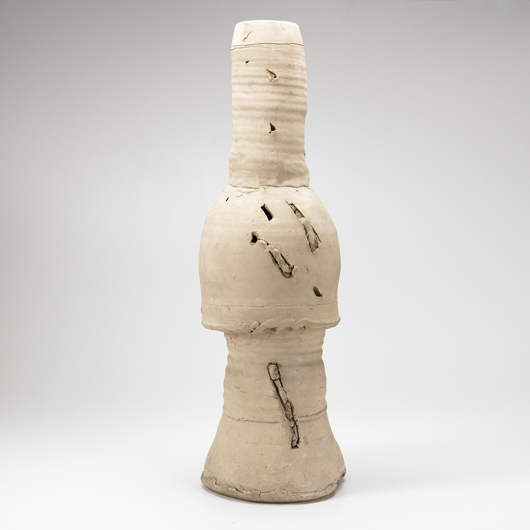 Voulkos founded the pottery department at the University of California, Berkeley, where he taught for many years. This unsigned unglazed stack pot was made in Berkeley in the 1960s and came from the collection of Steven Urry, a friend of the artist. The work brought $15,000 at Rago Auctions in 2012. Courtesy Rago Auctions