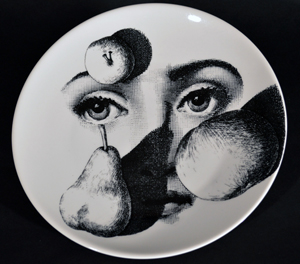 Ceramics specialist Paul Vandekar has added Fornasetti’s 20th century designs to the inventory he exhibit at major antique fairs, where they sell in the $200-1,500 range. The dealer particularly likes the trompe l’oeil twist of this Tema e Variazioni plate. Courtesy Earle Vandekar of Knightsbridge.

CHICAGO – Surrounded by the glories of Italian art, Piero Fornasetti (1913-1988) possessed a magical talent for transforming classic themes into brilliant contemporary design. Very much the Renaissance man, he was painter, sculptor, craftsman and decorator who applied his creativity to everything from an ocean liner to a porcelain plate.

Richard Wright heads a Chicago auction house specializing in modern and contemporary design and says, “I love Fornasetti. His work is a refreshing breeze in what can be an austere modernist aesthetic. A Fornasetti piece in an interior can add a note of surrealism, a more decorative flourish.”

He clearly values the past. It makes complete sense that he is an Italian designer,” continues Wright. “Also there is an element of humor to Fornasetti that is refreshing to see in the modernist tradition.”

Fornasetti spent most of his life in Milan, where he pursued formal studies at the Brera Academy in 1930-1932 but was expelled for “insubordination,” an indication that his artistic life might not follow a traditional path. Early projects included everything from printed designs for silk scarves to frescoes in a Padua palazzo. In 1940, he met Gio Ponti (1891-1979), a noted Milanese architect and designer, with whom he would collaborate on furniture and interiors.

In an Italian Masterworks sale last December, Wright sold an ash Ponti/Fornasetti bookcase design, for $50,000. He said, “We’d love to get more. Those are really sought-after. Ponti being at the top of the Italian design market, he’s known as being a rationalist but it’s wonderful that he let his pieces be decorated on every surface.” Fornasetti adds a flourish of joy to the purity of Ponti’s designs.

Fornasetti continually experimented with trompe l’oeil decoration of the sort that covers the Palladian cabinet, circa 1955, which brought $43,750 in the same sale. The case piece is modern in form, yet sports the façade of a classical building.

More tricks of the eye cover the surface of Fornasetti’s screens, such as one Wright sold in 2008 for $7,200 which appears to reveal the inside of a country gentleman’s dressing room. He notes, “The screens are great, they’re one of his most famous designs. There are many variations.” They are tremendously popular because they add such a decorative pop as a room accent.

Wright is delighted to be able to offer one of Fornasetti’s curvaceous Musicale chairs in the Living Contemporary sale coming up on Sept. 26 (est. $2,000-$3,000). The form was originally designed in 1951, and this example is from an edition of 20 issued in 1991. Although Piero Fornasetti is gone, his son Barnaba continues to operate the family studio. On the inventive website www.fornasetti.com collectors can find the artist’s designs, biographical details and information on the Milan store.

Wright points out, “I think from a collector’s standpoint it is important to understand how to date the material. Certain designs are still being made. We work directly with the Fornasetti studio. Barnaba is a great representative of the legacy; we pass every piece we get by him. They’re very good about dating and helping us to identify all the work correctly.”

On the website, ceramics collectors will immediately spot an image of Fornasetti standing next a wall of plates, and truly the porcelain plate held such a fascination for the Italian designer that he never tired of creating new patterns for their circular surface. His best-known series, Tema e Variazioni, features more than 350 trompe l’oeil and surrealistic variations on a single woman’s face. The artist saw a photograph of Italian soprano Lina Cavalieri (1875-1944), and he never tired of her beauty.

As pointed out on the official website, “For Piero Fornasetti, a single idea provided enough inspiration to create infinite variations. … By allowing his imagination to roam freely, Fornasetti was able to constantly reinvent or reinterpret an image.” The collection of a lifetime—whether you gather four or 50—a group of Tema e Variazioni plates provides an eye-riveting display for any interior.

Paul Vandekar, who sells fine early English, European and Asian pottery and porcelain as Earle Vandekar of Knightsbridge Inc., has added wall of Fornasetti designs to his display at antique fairs. He says, “We’ve always been very venturesome in what we sell. I like very strong designs—I love things that have an amusing element to them, I love trompe l’oeil.”

He adds, “Changes in taste that have been going on, and we wanted to buy 20th century objects; the Fornasetti porcelain seemed to be a natural progression for us.” Vandekar finds in Fornasetti’s designs the same sort of whimsy he values in English pottery. Also the use of classical and neoclassical motifs makes a connection between the 20th century porcelain and the 18th and 19th ceramics he offers. While many collectors do hang the plates on a wall, Vandekar says that other buyers arrange them as a dramatic table setting for the dining room.

In addition to the Cavalieri face variations, Fornasetti made other assemblages such as sets of a dozen plates that form a Renaissance Eve or Adam when hung in the correct order. A rarer series called Le Oceanidi features surrealistic combinations of pretty women and seashells.

Collectors entering the field should spend some time studying Fornasetti’s porcelain designs, which were transfer-printed on blanks that he purchased. Some designs are rarer than others. Some patterns were reissued by Rosenthal in Germany and bear that mark. The family company has also added some new variations since the designer died. Prices vary widely, and the plates are often sold at auction in assembled groups. Individual examples may still surface at house sales and markets. The designs are hard to resist, however, so the collector may just fall in love at first sight. 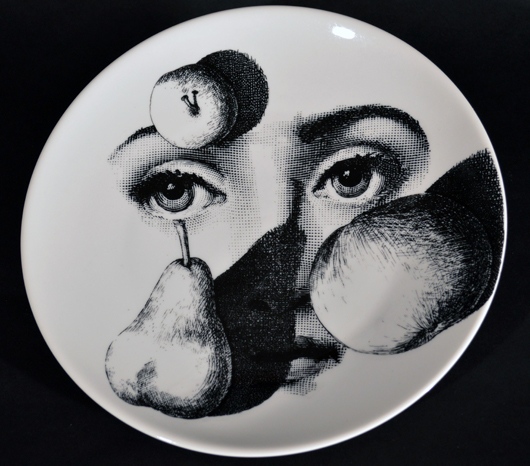 Ceramics specialist Paul Vandekar has added Fornasetti’s 20th century designs to the inventory he exhibit at major antique fairs, where they sell in the $200-1,500 range. The dealer particularly likes the trompe l’oeil twist of this Tema e Variazioni plate. Courtesy Earle Vandekar of Knightsbridge. 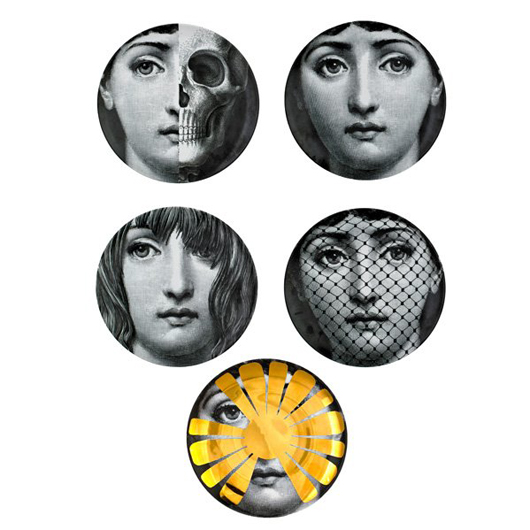 Five plates from the Tema e Variazioni series featuring the face of opera singer Lina Cavalieri brought $2,375 at a Rago auction in March. All are 10 1/4 inches in diameter and are marked “Fornasetti Milano Made in Italy.” Courtesy Rago Auctions. 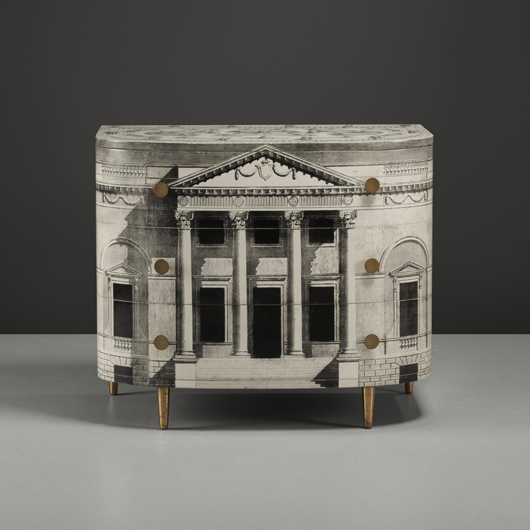 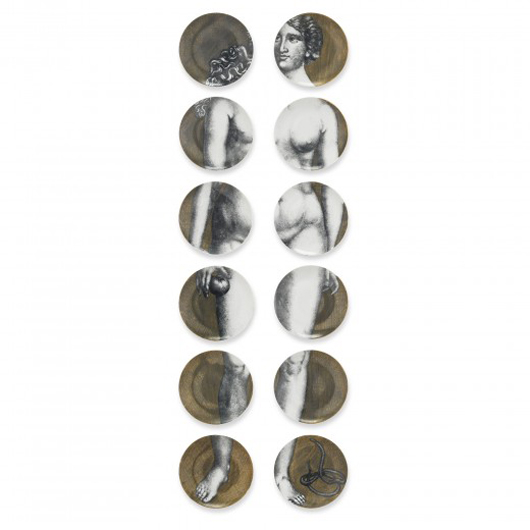 Like a large wall puzzle, 12 plates, designed by Fornasetti in 1954, can be assembled to form an image of Eve. The transfer-printed porcelain set brought $2,125 at Wright in 2011. The artist also created a set featuring Adam. Courtesy Wright. 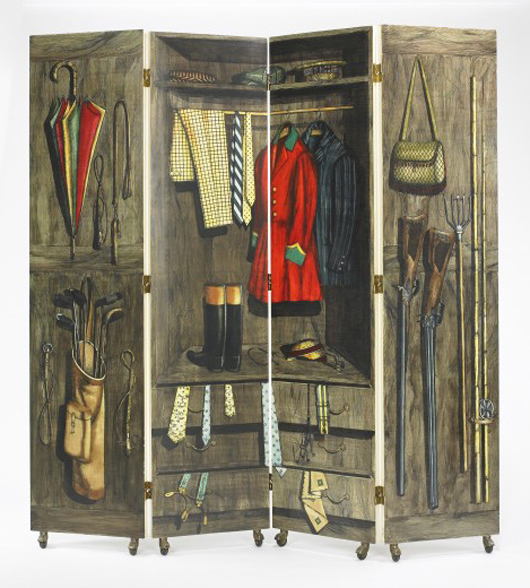 Fornasetti experimented with many trompe l’oeil designs, which decorated not only his porcelain plates but also furniture forms. This folding screen with a sporting gent’s accessories sold for $7,200 at Wright in 2008. Courtesy Wright. 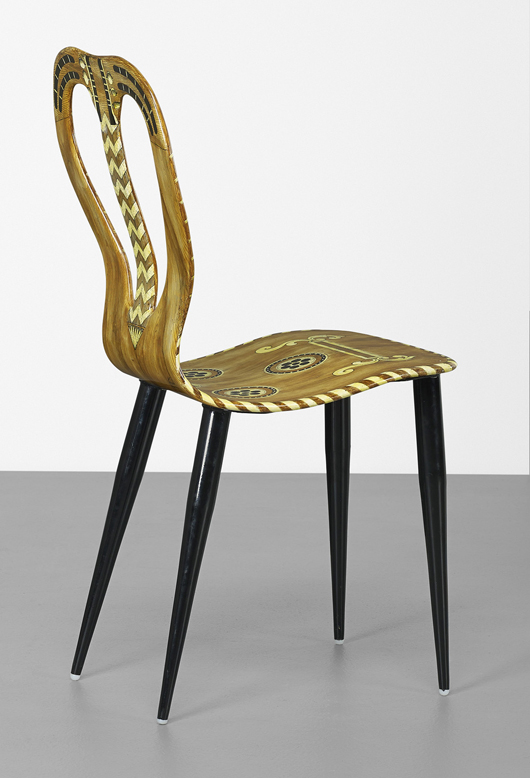 Wright auction in Chicago will offer this Musicale chair design by Piero Fornasetti in their Living Contemporary sale on Sept. 26 (est. $2,000-$3,000). Courtesy Wright. 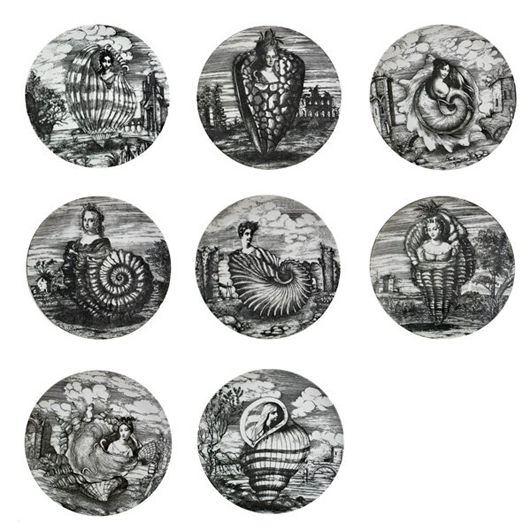 Less often found, a set of eight Le Oceanidi plates sold for $5,313 at Rago’s in March. All are marked ‘Fornasetti Milano Made in Italy’ and date to the 1950s-1960s. Courtesy Rago Auctions.