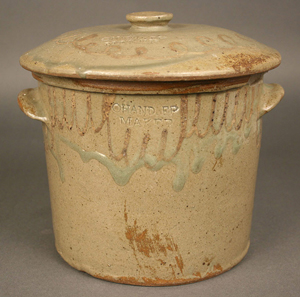 In the South, regional pottery is cherished as an important part of a distinctive artistic legacy. Collectors supply the enthusiasm. Historians, archaeologists and genealogists provide answers to crucial questions about the potteries that made the surviving redware and stoneware.

Their research has shed light on the types of pottery produced in the South, the source of basic materials and fuel for firing, and histories of the potters who set up the workshops.

When skilled potters emigrated from England and Europe, they often set up first along the Atlantic seacoast. Later some craftsmen – along with the apprentices they trained – followed the country’s expansion into the southern and Midwestern states.

Southern pottery is often more highly valued because less has survived from regional workshops there compared to their counterparts in New York or Pennsylvania. The market for well-documented Southern examples is highly competitive; five- and even six-figure prices are common.

Regional auction houses often focus on the pottery of their area, and the sales run by Case Antiques in Knoxville have captured the attention of collectors devoted to East Tennessee redware and stoneware. Information on the upcoming Oct. 16 auction can be found at www.caseantiques.com .

“People expect pottery from me,” said John Case, company president, who has become an expert on the local potteries. “We have three or four sales a year, getting people together, spending the day. It’s an opportunity for sharing information, for learning. I think that’s a really healthy thing for the business.”

As the catalog entry explained, the potter had a colorful history: “Haun was a Union sympathizer during the Civil War and participated in burning a Confederate railroad bridge. … In 1861, Confederate forces captured Christopher Haun and put him to death by hanging.”

“I get excited when I think about Christopher Haun,” said Case. “He’s kind of like the Paul Revere of pottery – a well-known figure in history who also happened to be an artisan.” The auctioneer wonders at “the incredibly sophisticated stamp-decorated forms we find in East Tennessee, when there wasn’t the wealthy population to support such advanced potters.”

Case pointed out the complex glazes used by Haun on the pitcher: “The copper oxide is the green and then this is a kind of iron oxide contamination, and then you’ve got these manganese streaks.” Watch for another marked Haun piece coming up in the October auction, a two-handled jar with dramatic decoration in copper oxide.

East Tennessee also had important workshops that made salt-glazed stoneware. A Knoxville collector paid $2,610 in May for a 4-gallon jar attributed to Charles Decker’s Keystone Pottery in Washington County, Tenn. The attribution was based in part on the cobalt tulip decoration. Case said, “We have examples of Charles Decker’s tulips with flaring petals that are distinctive to him.”

Like many other potters, Decker (1843-1914) came from Germany as a teenager, worked for another stoneware maker in Philadelphia, and then established his own Keystone Pottery there in 1857. The artisan moved south around 1870, worked briefly in Virginia, and eventually settled in an area of Tennessee with rich clay deposits.

Highlights from previous Case auctions have included an ovoid two-handled jar by East Tennessee potter J.A. Lowe sold for a record $63,000 in a September 2008 sale, and a redware pitcher attributed to the Cain Pottery of Sullivan County, Tenn., sold for $22,500 in May 2007.

Carole Wahler is an excellent example of a scholar/collector of Southern pottery who is passionate about her subject matter. She is currently preparing an exhibition of regional pottery scheduled to open at Knoxville’s Museum of East Tennessee History in next spring.

“The exhibition will include pottery – both earthenware and stoneware – from roughly 1800 to 1900 that was made in East Tennessee,” said Wahler. Collectors will be able to purchase a catalog of both the 2011 exhibition and a previous exhibition in 1996.

Wahler continues, “A few museums will be asked for pieces but it’s not principally a museum show. The loans will come from private collections, pieces that would not be seen if we didn’t have a show like this.”

Scholarly research in the South has resulted in books, articles and tightly focused museum exhibitions. Good examples of the latter are Made in Alabama (1995) and The Art of Tennessee (2003); both were accompanied by catalogs with informative chapters on pottery. References designed for Carolina collectors include such classics Turners and Burners: The Folk Potters of North Carolina (1990) by Charles G. Zug and Great and Noble Jar: Traditional Stoneware of South Carolina (1993) by Cinda K. Baldwin.

Collectors interested in building a reference library in this field can visit the Web site of the Southern Folk Pottery Collectors Society based in North Carolina (www.southernfolkpotterysociety.com . Their bookshelf offers a wide selection of specialized works on regional potteries. 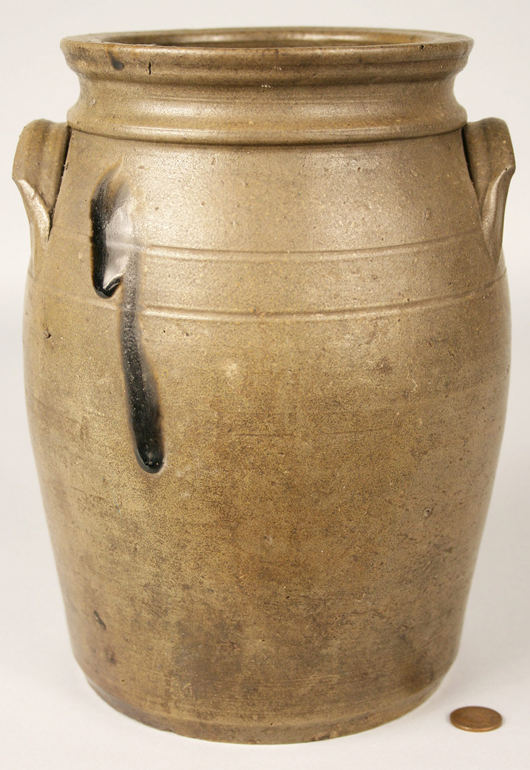 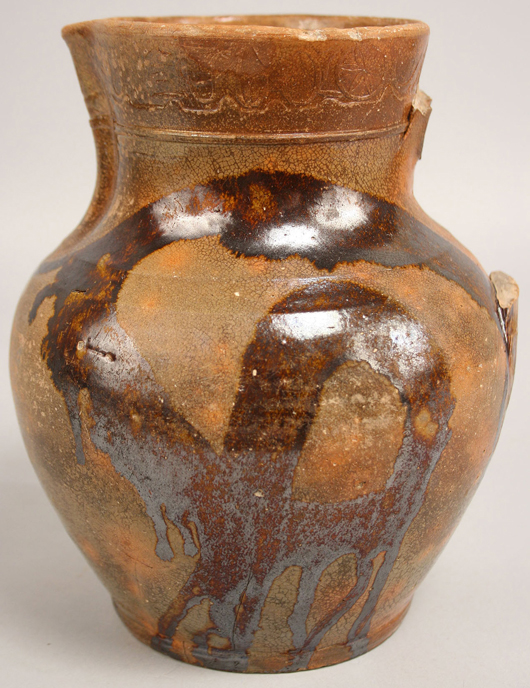 This simple pitcher with lead glaze enhanced by loops of manganese or copper oxide surpassed its estimate to reach $9,988. The rare form was marked by Christopher Alexander Haun, a Greene County, Tenn., potter who was executed in 1861 for being a Union sympathizer. Image courtesy Case Auctions, Knoxville, Tenn. 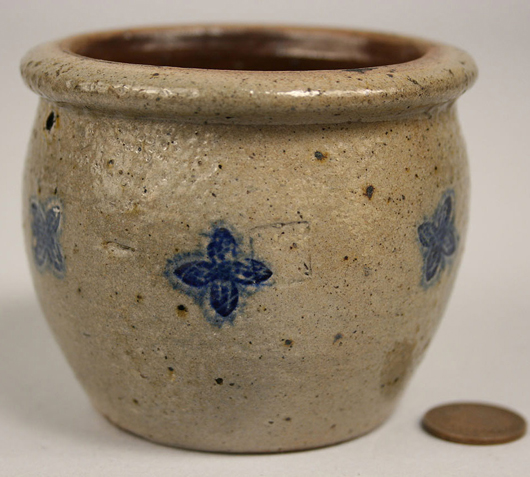 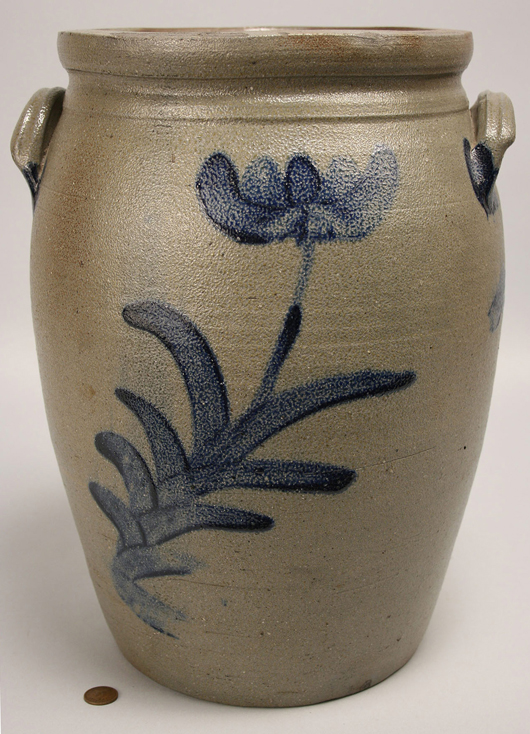 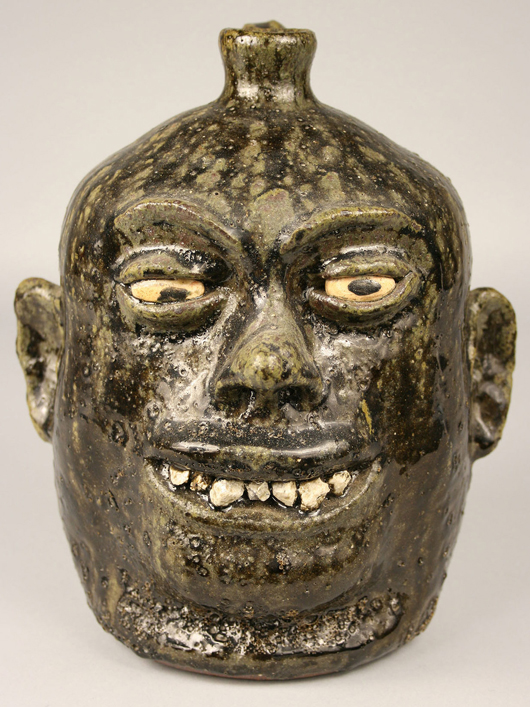 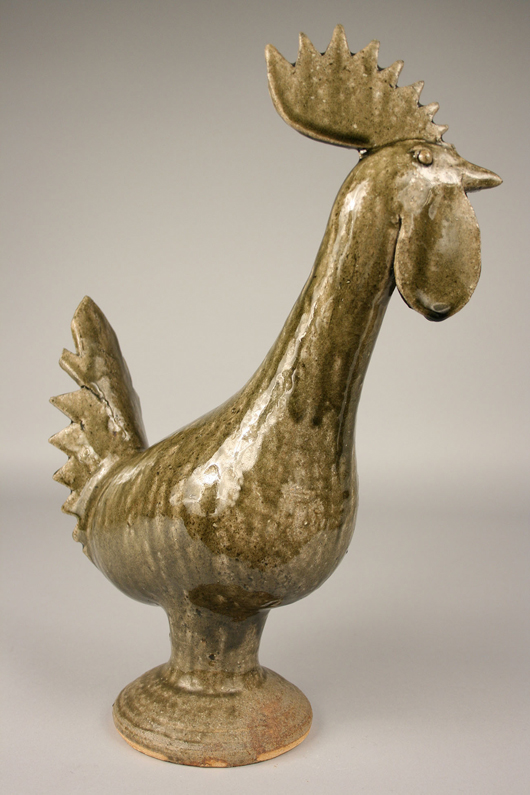 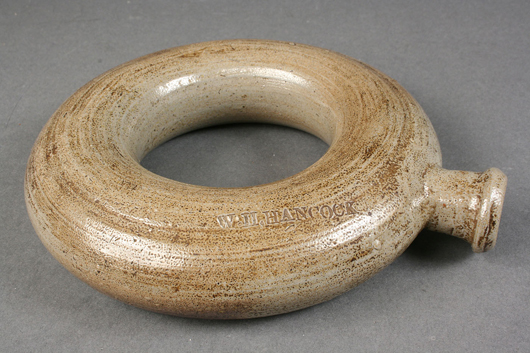 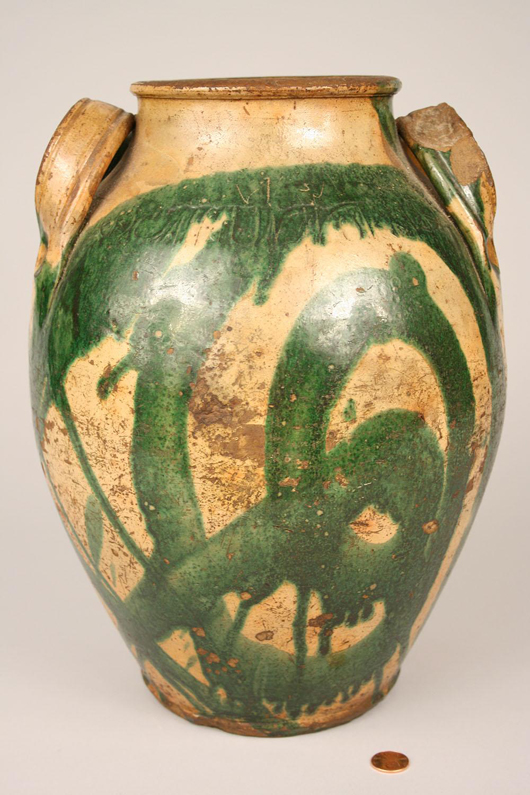 This 19th-century redware jar, made in the workshop of East Tennessee potter Christopher Haun, will be offered in the Oct. 16 sale at Case Auctions in Knoxville. Dramatic streaks of green copper oxide decorate the curve of the body. Image courtesy Case Auctions, Knoxville, Tenn. 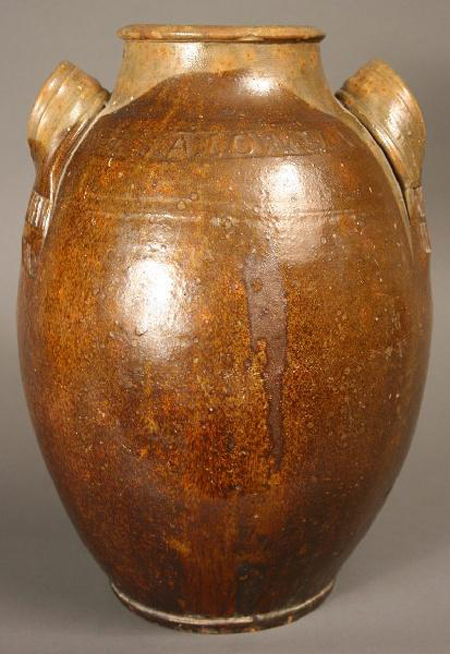 This large two-handled redware jar – clearly marked on the neck by Tennessee potter J.A. Lowe – sold to a private collector for $63,000 at a Case Auction in September 2008. Image courtesy Case Auctions, Knoxville, Tenn.

Discovery of tunnel may unlock secrets of Teotihauacan ruins