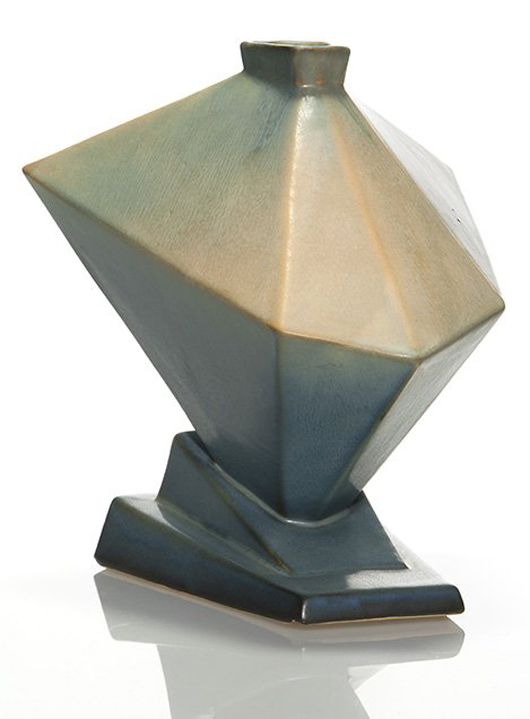 CINCINNATI – The extensive Roseville collection of Randy Monsen and Rodney Baer offered at a Humler & Nolan auction on Saturday, March 7, was far more than your grandmother’s floral vases. The very fact that everyone’s grandmother had a couple of Roseville pieces reflects the company’s long history spanning six decades. The incredible variety of those pieces can be attributed to the Ohio factory’s bountiful output and willingness to update and experiment with ever-changing styles.

The pottery’s name came from Roseville, Ohio, where operations began in 1890, a name kept when the firm moved to the nearby ceramics center of Zanesville in 1898. The first lines were designed to compete with other well-known Ohio art potteries such as Rookwood and Weller. But with a production that continued until 1953, Roseville absorbed influences from the Art Nouveau, Art Deco, Moderne and Streamline styles while it continued to satisfy grandma’s desire to see her favorite flowers on a pretty vase.

Like every serious gathering of Roseville, the 800 examples offered in the auction reflect the collectors’ own focus on their personal favorites among the company’s myriad lines. In an interview with Auction Central News, Riley Humler said, “Randy Momsen was an enthusiast to the nth degree. There are a few early pieces, but primarily we’re talking about pieces made in the 1930s and 1940s.

“Particularly of interest, he got into buying experimental pieces that were created to show but never put into production, so there are probably 30 experimental pieces that are relatively unique. He was also very interested in trial glaze pieces where they would take a standard line and use different color combinations to get a sense of what they might look like. So these are things that are fun to see because the colors are not what you expect.”

Humler continued, “Monsen really loved Roseville and he really loved the things he wrote about. He ended up writing two books, and there was a third book being written when he passed away. Each book covered half a dozen glaze lines; the first one primarily dealt with Futura, which is a very modern Art Deco line from Roseville.

If you’re interested in one of those particular lines he wrote about, the books are a great opportunity to study them.”

The publications referred to are the Collectors’ Compendium of Roseville Pottery by Randall B. Monsen. Volume 1 covers the Futura, Faline, Earlam, Artcraft, Cosmos and Artware lines; Volume 2 discusses the Baneda, Cremona, Ferella, Laurel, Montacello, and Wincraft series. For anyone who thinks of Roseville in terms of floral favorites like Magnolia, Iris, and Jonquil, Futura is the line that defies all expectations – and brings some of the highest prices in the pottery’s production.

The streamlined “Tank” shape and “Chinese Bronze” shapes may bring bids in the five-figure range, but there are dozens of other geometric forms with startling two-tone glazes. At the line’s introduction, Roseville advertised: “This delightful new pattern by Roseville – Futura – brings into your home the charm and the exhilarating tang of the modern.” Another promotion extolled “… the modernistic beauty of Futura … the dashing lines … the fearless spirit that Roseville craftsmen have so artfully given them.”

Before the sale, Humler acknowledged that this auction will establish values for the categories on offer: “There are obviously flare-ups of interest in certain kinds of things. A lot of Roseville is off considerably from what it was eight or nine years ago, but the nice thing about this collection is that there are some rarities here, some really interesting pieces. There are lines you see on a regular basis, but even there we’ve tried to include examples that are uncommon, large examples, which don’t show up a lot. It’s a pretty clean group as well.”

He concluded, “This is a significant sale of significant pieces and we’re tickled to death to have it. The breadth of it and the complexity of some of the pieces, you won’t have the opportunity to see things like this ever again. Collectors are looking for rarity; that seems to be the way things are trending today. If you like Roseville or you’re even curious about it, this is a once-in-a lifetime opportunity.”

After the auction, Humler said, “We are pleased with the sale for several reasons. We had a good group of bidders and prices for Roseville were better than they have been for a bit.” He noted that four of the top five prices were paid for pieces in the Futura line: the “Tank” vase $13,500; the “Chinese Bronze” vase $10,000; a three-piece “Flying Saucer” set $8,250; and a “Jukebox” vase $4,300. Rounding out the group was an experimental vase with Mackintosh roses sold for $5,000. Colleague Mark Mussio added, “I believe provenance was the key. People were excited by the prospect of owning a piece from this amazing collection.”

A note for the future: Randy Monsen was especially interested in the design work of Frank Ferrell who worked for a number of potteries over the years and ended up at Roseville. The designer was responsible for some of Roseville’s most stylish Art Deco pieces, and the reference books mentioned above reflect Monsen’s research on Ferrell. Monsen and Baer also purchased works by the designer from his time at the Weller and Peters and Reed potteries, and those will be offered during the Humler & Nolan Keramics 2015 session on June 6. 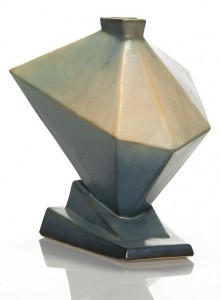 The holy grail of modernist Roseville is the rare ‘Tank’ vase from the Futura line introduced in the 1920s. Monsen used the streamlined form as the cover illustration for his first book on the pottery. The rare design became the top lot of the March auction, selling for $13,500 (est. $8,000-$10,000). Humler & Nolan image 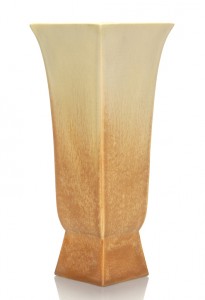 The 12-inch Chinese Bronze vase appears in a period advertisement for Roseville Pottery, yet only a handful now exist. This rare Futura form in a shaded yellow glaze sold for $10,000. Humler & Nolan image 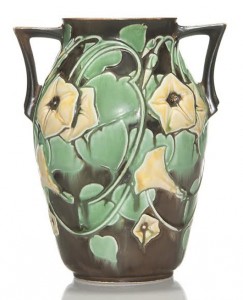 The Monsen-Baer Collection included many experimental pieces made at the factory. This Morning Glory glaze trial vase in a double-handle amphora shape has yellow blossoms on one side and white blue tinted blossoms on the reverse – final price $2,100 (est. $400-$600). Humler & Nolan image 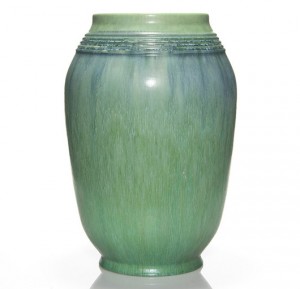 The Imperial II line was characterized by inventive art pottery shapes covered in impressive glazes. This monumental floor vase in excellent original condition retains the Roseville foil label on the base and brought $3,100 in the March sale. Humler & Nolan image 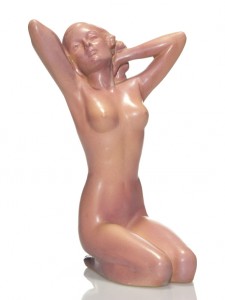 Frank H. Barks was the Roseville designer responsible for many of the sleek nudes in the Silhouette line. This figure in a matte rose glaze may have been a trial piece or a one-off creation preserved by the designer’s family. It sold for $1,700 in the Monser-Baer auction. Humler & Nolan image 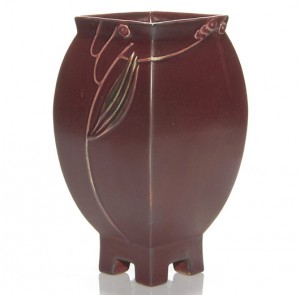