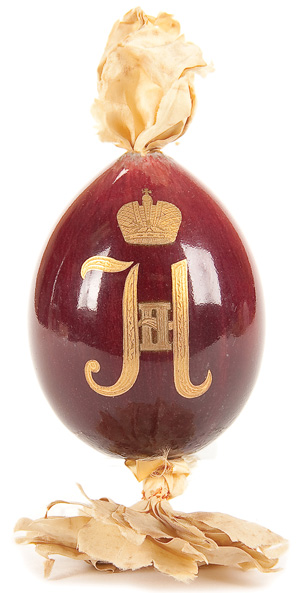 The Imperial Porcelain Factory created a deep red oxblood or sang de boeuf glaze, in imitation of the Chinese. This presentation Easter egg, circa 1915, bearing the gilded cipher of Nicholas II, sold for $7,200 last May. Courtesy Jackson’s International Auctioneers.

Every era has cutting edge technology, and nations have always bought, borrowed or stolen the best for their regimes. Today we might list computers, communications and armaments as areas of high tech achievement.

Czar Peter the Great, who began his rule in 1682, certainly wanted the latest weapons to defend the Russian Empire, but next on his want list may have been the industrial secret for making fine tableware. Duplicating the beauty and durability of Chinese porcelain had become a national quest for European states.

“Russian rulers pursued the secret of manufacturing true porcelain as avidly as kings and princes in the rest of Europe,” states curator Anne Odom in Russian Imperial Porcelain at Hillwood. “For Russians, the production of porcelain became a touchstone of the country’s campaign to Westernize.”

Factories already making porcelain in Europe, many under state patronage, tried to protect their great industrial secret. Peter first lured away someone who had worked at the Meissen works in Germany, who failed to produce as promised.

Around 1746, Dmitrii Vinogradov, a young Russian who had studied abroad, produced a successful formula. His experiments were aided by the fact that there were good sources of kaolin – a principal ingredient for hard paste porcelain – located in Russia.

Following this discovery, Russian porcelain production continued under the czars for over 150 years. Extensive table services, decorative urns, figurines and symbolic Easter eggs were commissioned by the nobility. The finest decorators were recruited from Europe to paint the porcelain.

As would be expected, early decorative styles resembled work at important European factories such as Meissen and Sevres. Decorative schemes included landscapes and mythological themes as well as flora and fauna.

For example, a tea and coffee service in the Hillwood Museum collection, made 1801-1815 in the reign of Alexander I, has well-painted panels with Italian views accented by highly detailed gilding. Other services are decorated with Russian subjects – views of St. Petersburg or portraits of people in native costume from various parts of the Empire.

An interesting development under Nicholas I, who ruled 1825-1855, was the rise of a distinctive style of ornamentation based on historic Russian styles. Artists were sent out to copy decorative patterns on material in the state treasury and important early churches. This pan-Russian style remained popular throughout the 19th century.

Odom explains, “When he commissioned the Kremlin Service in 1837, Nicholas introduced a new source of ornament into the rich vocabulary of Russian decorative arts, making use for the first time of Old Russian motifs from the 17th century, dating to a period before Peter came to the throne.”

The Kremlin Service mentioned above was designed for elaborate state dinners which might seat 500 guests at one time. Thousands of individually painted plates were made for the set, which took over 10 years to complete. Any piece is a collector’s treasure.

Marjorie Merriweather Post, the famous cereal heiress, was an enthusiastic early collector of Russian porcelain and decorative arts. Her treasures, including examples from important table services, are on view at her former residence in Washington, D.C., now called the Hillwood Estate, Museum and Gardens.

The museum’s website, www.hillwood.org, presents an overview of exhibitions and resources and includes an informative introductory film. The Hillwood book shop offers important catalogs and essays on the Post collections. In addition to Russian Imperial Porcelain at Hillwood¸ collectors will enjoy A Taste for Splendor: Russian Imperial and European Treasures from the Hillwood Museum, and What Became of Peter’s Dream?: Court Culture in the Reign of Nicholas II.

Like many collectors of her day, Post’s attention first had been focused on French furniture and decorative arts. When her husband Joseph Davies became ambassador to the Soviet Union in 1937, she was able to acquire Russian porcelain, paintings, icons, and even imperial Easter eggs at a time when they were seriously undervalued in the marketplace.

Contrast those days with the present antiques market, in which Russian entrepreneurs delight in buying back the fine and decorative arts of their homeland. Christie’s and Sotheby’s in New York and London have had great success with sales of Russian porcelain and metalwork, but the Internet makes it possible for collectors to unearth important lots wherever they appear.

Jackson’s, a major regional auction house in Cedar Falls, Iowa, has achieved this international reach. Cataloged auctions in May and October 2010, each more than a thousand lots, featured the Russian collections of Dr. James F. Cooper and Dr. Brad LeMay. Both collections had been formed from excellent sources, and bidders battled over important examples of porcelain, holy icons, enameled metalwork, silver and militaria.

During his travels in a previous career as an advertising executive, company president James L. Jackson had developed a strong interest in Russian art. In a recent interview, he said, “I knew a lot about the auction business, how it worked as a buyer and a seller, and I had expertise in certain areas. I traveled extensively in Russia.

“In 1993 I quit my job and decided to buy a building. I was forward thinking enough to know you didn’t have to be in New York. You could be somewhere where the cost of doing business was much less. What if everything that went to auction in the Midwest – that I would want – came to me?”

When the Russian collecting boom began around 2000, Jackson was ideally placed to capture his share of the market.

“There were really only a few places that could handle Russian material, know what it was and properly describe it.

“Russia, in the late 19th and early 20th century, did see the growth of a middle class. They were so close to getting their act together. Nicholas II was a soft-spoken, compassionate czar, but a weak leader. Between 1875 and 1915, the amount of art produced in every field was fantastic – ceramics, wood, paintings, sculpture. These things are truly unique to Russia and very beautiful.”

Jackson said, “Last year, we were fortunate enough to have two lifetime collections of two American physicians – one from St. Louis and one from Arkansas. They were typical of those quiet unseen buyers who form great collections.”

These old collections coming fresh to the market drew competitive bids from dealers and collectors in Moscow and St. Petersburg. Highlights are illustrated below, while the complete catalogs with results can be viewed at www.jacksonsauction.com. 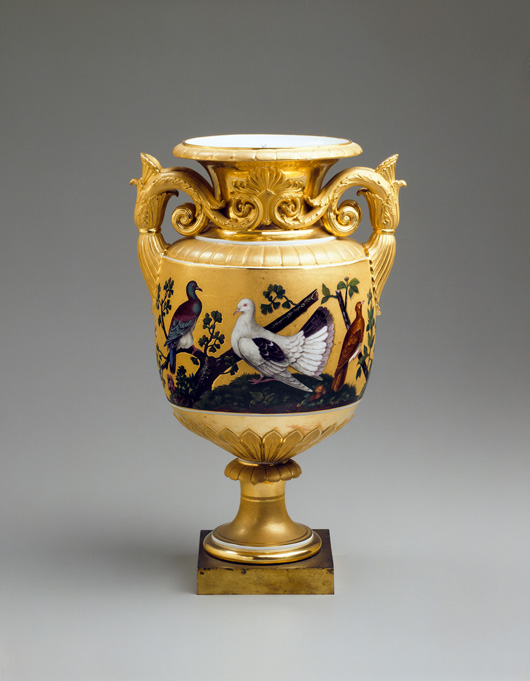 Visitors to Hillwood Museum and Gardens in Washington, D.C., can view Marjorie Merriweather Post’s superb collection of Russian porcelain, paintings and decorative arts. Among the treasures is a pair of magnificent gilded vases decorated with pigeons that were made during the reign of Nicholas I (1825-1855). Courtesy Hillwood Museum & Gardens. 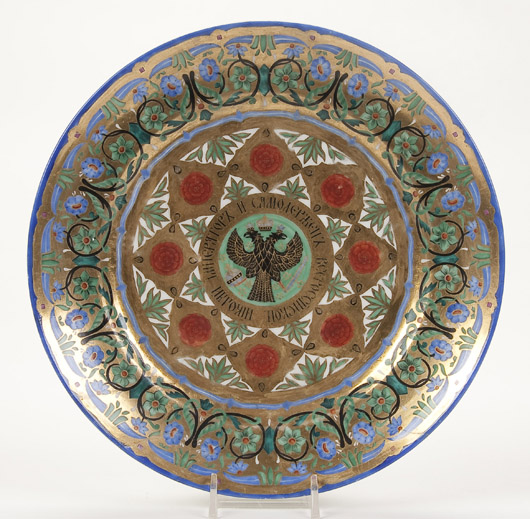 The Kremlin service of Nicholas I (1825-1855) is densely decorated with historic Russian artistic motifs and features the Imperial double-headed eagle in a central cartouche. This plate sold in October at Jackson’s for $3,120. Courtesy Jackson’s International Auctioneers. 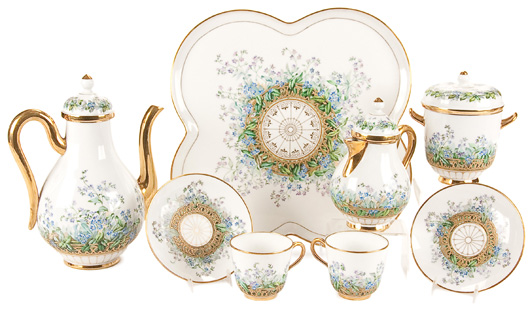 Made during the reign of Alexander II (1855-1881), this tete-a-tete tea service with original fitted traveling case was sold at Jackson’s in May for $25,200 with buyer’s premium. The set with quatrefoil tray is decorated with delicate sprays of violets and gilt tracery. Courtesy Jackson’s International Auctioneers. 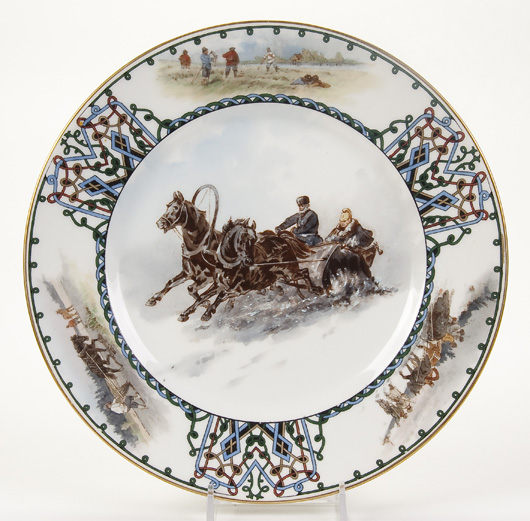 This porcelain plate with winter scenes and pan-Slavic strapwork on the border was made circa 1890 by Kornilov Brothers factory for export to Tiffany New York. Although a commercial product, the attractive subject matter took the plate to $4,800 at Jackson’s auction in October. 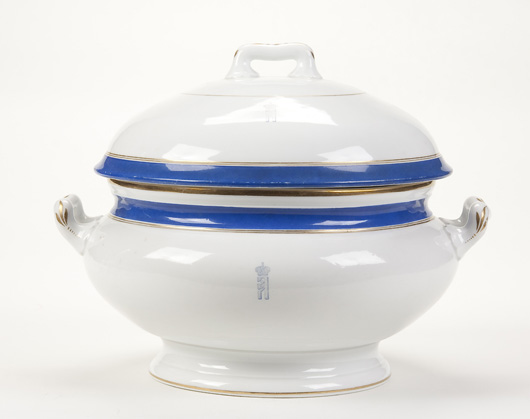 This tureen banded in blue, dated 1897, was part of a special service made for the Imperial yacht Tsarevna. The elegant serving dish brought $3,120 last fall. Courtesy Jackson’s International Auctioneers.