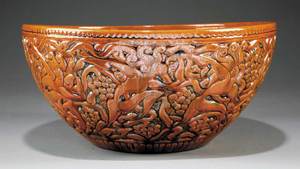 This rare large-scale bowl (D. 15 inches) was designed and carved by Walter Anderson and glazed by his brother Peter around 1930. Decorated with bacchantes and grapes, the example sold for $23,900 at the Louisiana Purchase Auction in November. Image courtesy Neal Auction Co.

When the Antiques Roadshow stops at Biloxi, Miss., collectors will be visually reminded of the region’s great legacy of art and studio pottery. The ceramics made at Newcomb College in New Orleans and by Biloxi’s own “Mad Potter” George Ohr are well known, but many people are less familiar with the beautiful creations of the Shearwater Pottery in nearby Ocean Springs.

Several variables distinguish Shearwater’s output from other wares. The pottery was founded in 1928, decades after the beginning of local firms like Newcomb and Ohr or of national companies like Grueby and Rookwood. Unlike classic art potteries, however, Shearwater continues to function more than 80 years later. And this continuity has been maintained because the workshop remains a family affair, run by descendants of the founding Anderson brothers.

Amanda Mantle Winstead, pottery expert at the Neal Auction Gallery in New Orleans, said, “The Shearwater Pottery was not part of the Arts and Crafts Movement. It’s all about the Anderson family. They’re an incredibly talented and creative group of people – they still are. The subsequent generations are also artists. Ocean Springs is a charming town, and the Walter Anderson Museum is absolutely wonderful. Next door is the Ocean Springs Community Center which is decorated with Walter Anderson’s amazing murals from the 1950s.”

Shearwater Pottery was founded by Peter, Walter and Mac Anderson in 1928. The brothers were inspired by their mother Annette McConnell Anderson, an artist who had studied at Newcomb College. The eldest brother, Peter, studied pottery-making techniques with various masters and at Alfred University in New York state. He learned how to throw on the wheel, make molds and create the colorful glazes used on the vessels. Younger brothers Walter and Mac decorated the pieces with carved patterns and painted designs.

Today Walter Inglis Anderson (1903-1965) is by far the best-known of the three siblings, because he was also a prolific watercolor and mural artist, noted for depicting the colorful wildlife and environments of the Mississippi Gulf Coast. Plagued by mental illness from the 1930s on, Anderson often retreated to islands off the coast with only survival gear. His intensely original and stylized depictions of marine life, birds and animals are highly sought-after by collectors.

His work has been the subject of major retrospectives, and both the paintings and family pottery have a permanent home in the Walter Anderson Museum in Ocean Springs. These works also appear on the national art market and in local auctions in New Orleans. As far as the pottery is concerned, Amanda Winstead noted, “If you can connect Walter Anderson to it – if you know he decorated the piece – that is what pulls it into the next level.”

At Neal’s Louisiana Purchase Auction in November 2009, such a work – a circa 1930 bowl with a carved decoration of grapes and dancing bacchantes – sold for $23,900. Winstead points out, “For Shearwater, that was an exceptionally large piece in a form they had not been known to have existed before. The owner of it showed it to the family and they were very excited about it. The museum wants to borrow it. That was a piece that Walter Anderson had designed and carved.”

Douglas Myatt, director of Collections and Exhibitions at the Walter Anderson Museum of Art, agrees, “That’s a phenomenal piece. We have a sister piece in the collection. It’s the same shape, but it was carved by their youngest brother Mac. It’s reticulated – he carved filigree around the edges – it’s pretty outstanding.

“We have quite a collection of pieces from the very earliest days – probably even before Shearwater actually opened, when Peter was doing test firings – to current things. It runs the gamut.”

In addition to the examples with carved decorations, the pottery produced charming bowls and vases painted with naturalistic motifs similar to those found in Walter Anderson’s paintings.

Collectors can learn more about the pottery and its output in two references. Dreaming in Clay by Christopher Maurer and Maria Estrella Iglesias is a comprehensive history of the pottery and its artists. The couple also provide information and a timeline at the Web site dreaminginclay.com. Shearwater Pottery by Dod Stewart with Marjorie Anderson Ashley and Earl Lamar Denham is filled with magnificent illustrations of the range of wares produced in Ocean Springs.

Stewart has a lifelong interest in Shearwater: “We used to spend our summers on the Gulf Coast, and I’ve been going over there since I was a little kid. We collected the figurines of baseball players and fairy tale figures which appealed to the kids.” The pottery’s line of figures also included a series of birds and animals.

Values for Shearwater pieces vary widely from five-figures prices for Walter Anderson’s early work to $100-$200 for later works and small figurines. Stewart stresses that every piece – from the pottery’s foundation to the present day – is an individual creation: “I think Shearwater Pottery is very under-appreciated – people don’t understand its history. It’s never been cheap because it takes a lot of time; it’s an expensive process.”

Although the museum was spared, the family compound and pottery were severely damaged by Hurricane Katrina. Production was disrupted for several months, but the works and its salesroom have been rebuilt and reopened. Douglas Myatt confirms, “They’re probably making more pottery now than in the last 20 years.

Learn more about Shearwater Pottery, the Anderson family, and life in Ocean Springs at the museum website walterandersonmuseum.org or call 228-872-3164. 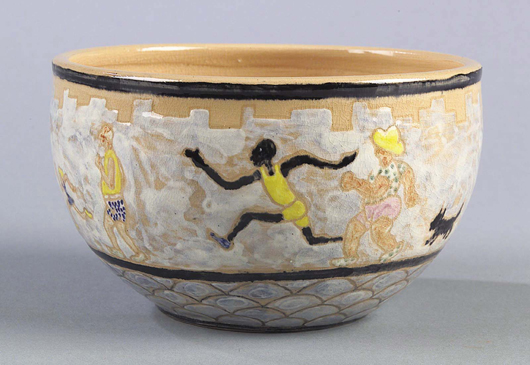 A 1981 bowl thrown by Peter Anderson and decorated with a band of figures by Mac Anderson sold in December 2005 for $3,840. Image courtesy Neal Auction Co. 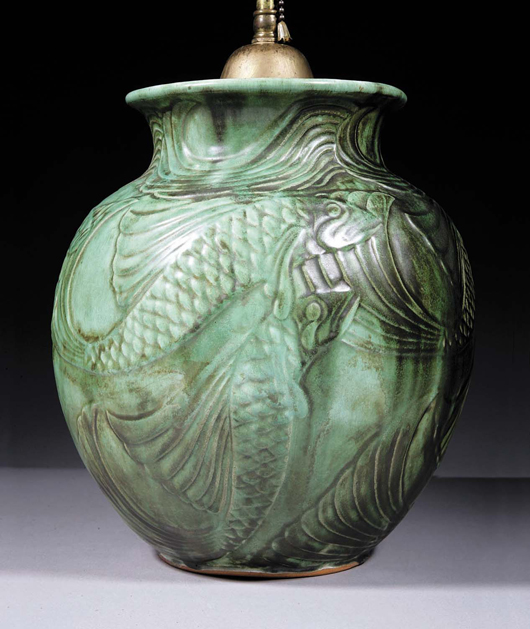 Wrapped with swimming fish, this Shearwater lamp base is signed by Mac Anderson and dates to around 1930. The rare form sold for $12,925 in Neal’s December 2008 auction. Image courtesy Neal Auction Co. 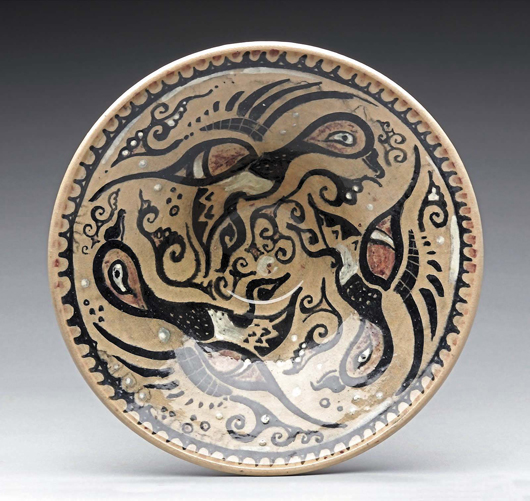 Walter Anderson used many of the same naturalistic themes for pottery decoration that are found in his watercolors. This shallow bowl, thrown by brother Peter Anderson, is decorated with a duck motif. It sold at auction in 2007 for $9,400. Image courtesy Neal Auction Co. 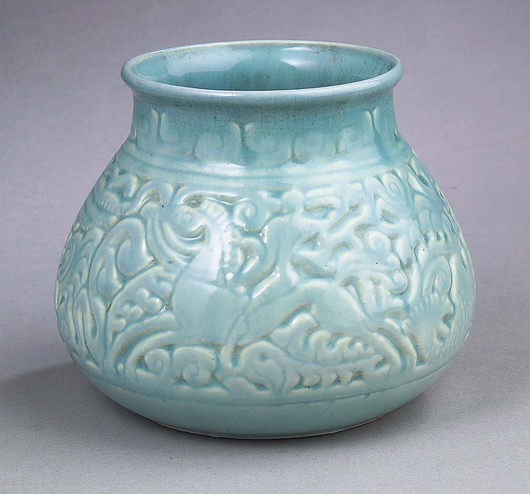 A 6-inch-high vase, decorated around 1940 with the ‘Sea, Earth and Sky’ relief pattern designed by Walter Anderson, sold in 2006 for $5,875. Image courtesy Neal Auction Co. 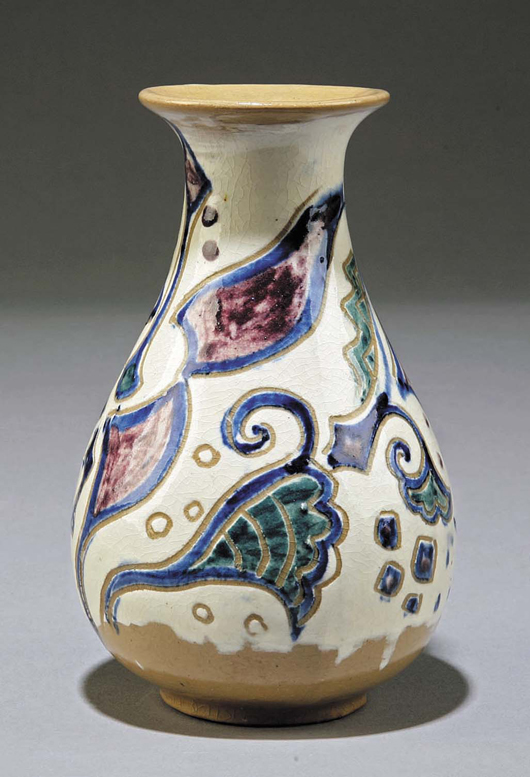 Cast by Peter Anderson circa 1950, this vase was incised and painted with a marine pattern by Walter Anderson. The Shearwater piece sold in February 2009 for $2,115. Image courtesy Neal Auction Co.