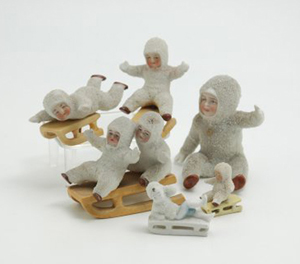 Snow babies are all about winter sports. The sled with two riders is marked ‘Germany’ on the base. The entire group sold for $316 in a 2009 Bertoia sale. Courtesy LiveAuctioneers.com Archive and Bertoia Auctions.

Perhaps those ski resorts praying for snow need a mascot. Enter the Snow Babies—classic porcelain figurines first made in the late 19th century. The tiny figures ride sleds, play with polar bears, and cavort in the snow. They were so charming that no one could buy just one—they were born to be collectibles.

If they look good enough to eat, that results from their edible sugar candy prototypes. Called zucker puppen in Germany, they were used as holiday decorations, children’s treats and cake toppers. A German confectioner saw the advantage in re-creating the popular sugar ornaments as bisque porcelain figurines, which could be played with long after the cake had been consumed.

Porzellanfabrik Hertwig & Co. in the Thuringia area of Germany was among the first to begin making snow baby figures in the 1890s. The snowy icing or fur effect on the surface was created by rolling the damp models in crushed bisque before firing. Collectors particularly prize the examples made before World War I, which share the high quality and attention to detail embodied in good German dolls of the period.

Some of the early German examples stand 5 or more inches and are jointed like dolls. Later snow babies, made between the World Wars, were smaller in scale—1 to 3 inches high. Japan manufactured its own versions of the small figures, which proved equally popular with the public.

Although collectors look for good detail and skillful painting, the most delightful aspect of snow babies is the variety of activities they pursue. Since they seem to live near the North Pole, remarkably tame polar bears became playmates. At other times, seals balance balls and huskies pull the babies’ sleighs.

Forget the Meissen monkeys—snow baby bands with horns, drums and accordions are easy to assemble. Above all, the babies love sledding, and there are hundreds of variations on the theme. Turn-of-the-century families bought thousands of the small figures to display on mantels and surround the dollhouse.

Snow babies occasionally were tied to current events of the period. In the early years of the 20th century, the race to reach the North Pole garnered the same headlines as the mid-century race to the moon. Explorers Robert Peary and Frederick Cook both claimed first prize in the polar competition, and it was difficult to verify their journeys. Not surprisingly, one German factory brought out a porcelain figure of the two big mustachioed snow “babies” scrambling toward the pole.

Collectors will find more information in Snow Babies & Friends by Lisa Mullins Bishop, a December 1999 article in Early American Homes, which was used as a source for this column. That story was illustrated with figures from the collection of Linda Vining, examples from which were sold in “A Toy Feast” auction of November 2005 at Bertoias in Vineland, N.J.

In that auction, the unusual Peary-Cook group brought $2,475 over a $1,000-$1,300 estimate, a high price which reflects its news-of-the-day importance. Another lot with two traditional snow babies planting the American flag on the North Pole sold for $330.

Normally, snow babies engaged in the most interesting activities sell in the $100-$200 range. The figurines are frequently offered in group lots, and a large collection can be formed quickly for a modest investment. Many of the post-World War I figures have details added in colored paint after firing, so check carefully for wear and chipping.

While snow babies commonly show up in winter auctions, the best buys may turn up at sales and shows out of season. The tumbling, laughing figures are still perfect for their original purpose. Use them to decorate cakes and table settings when the weather is icy cold outside. 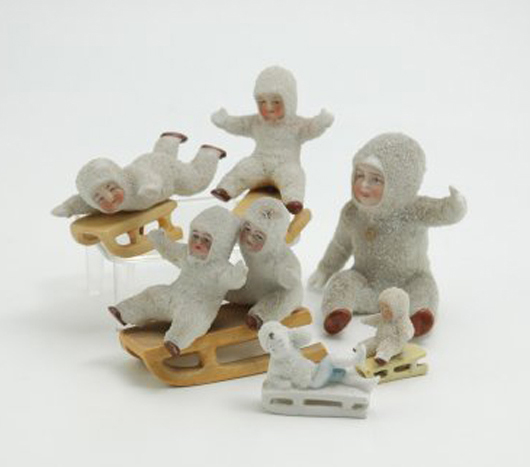 Snow babies are all about winter sports. The sled with two riders is marked ‘Germany’ on the base. The entire group sold for $316 in a 2009 Bertoia sale. Courtesy LiveAuctioneers.com Archive and Bertoia Auctions. 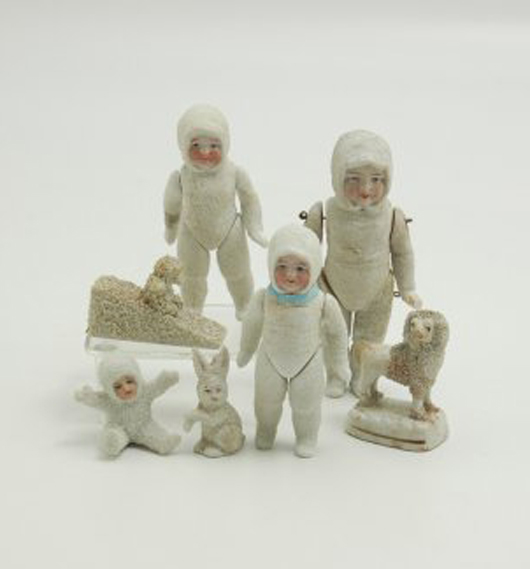 These rare jointed snow babies – the tallest 5 inches – were made in Germany 1900-1910. With a selection of related figures, they brought $230 at auction in 2009. Courtesy LiveAuctioneers.com Archive and Bertoia Auctions. 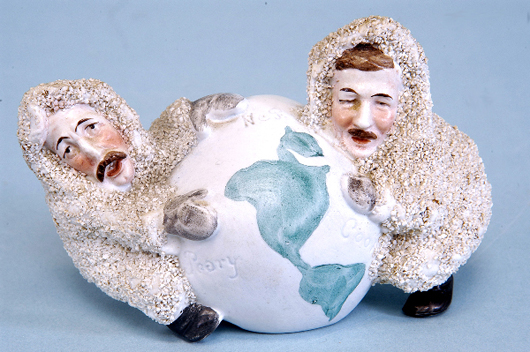 Whimsy meets history in this snow “babies” pairing of explorers Robert Peary and Frederick Cook arguing over who was first to reach the North Pole. The German porcelain group, circa 1910, sold for an impressive $2,475 in 2005, when Bertoias auctioned off the Linda Vining collection. Courtesy LiveAuctioneers.com Archive and Bertoia Auctions. 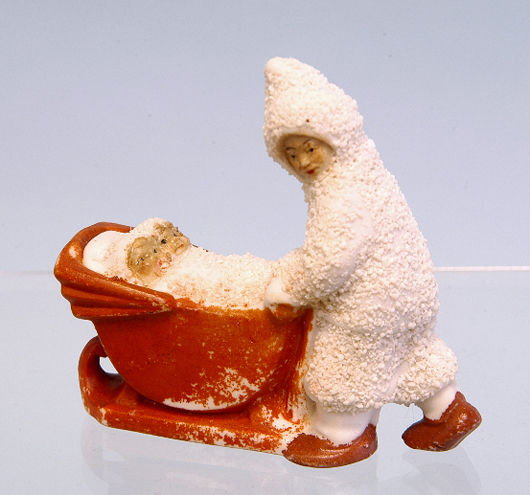 Collectors search out unusual presentations, such as this Snow Mom pushing her twins in a sleigh pram, which brought $357.50. Courtesy LiveAuctioneers.com Archive and Bertoia Auctions. 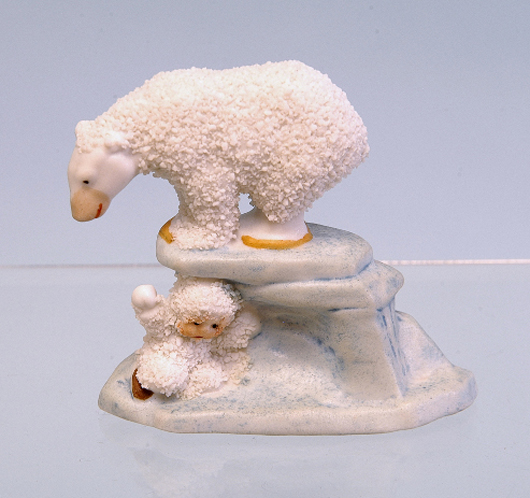 Snow babies often play with friendly polar bears. Note the similar treatment of the fur coats on this porcelain group from Germany sold in a 2005 auction for $330. Courtesy LiveAuctioneers.com Archive and Bertoia Auctions. 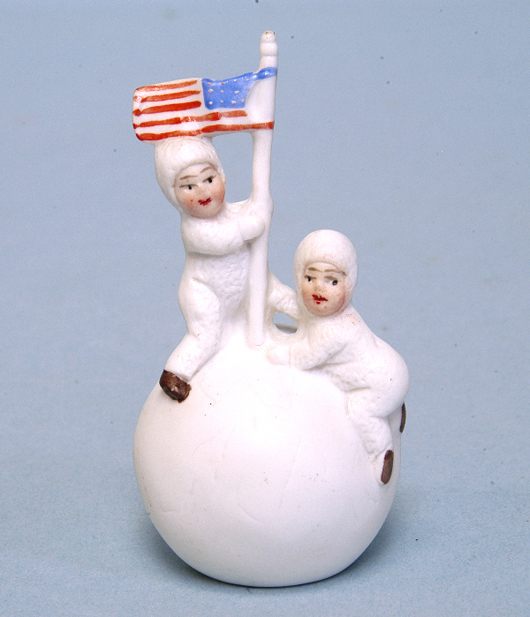 The race to the North Pole was big news in the first decade of the 20th century. Snow babies plant the flag in this collectible made in Germany for the American market – auction price $330. Courtesy LiveAuctioneers.com Archive and Bertoia Auctions.