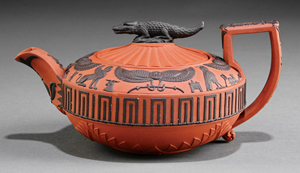 In September, the Neal Auction Co. sold the furniture and decorative arts collection of legendary New York collector Lee B. Anderson. Entranced by the revival styles of the 19th century, Anderson accented his formidable holdings in Classical and Gothic Revival forms with a fine selection of artifacts in the rarer Egyptian Revival style. Buyers responded enthusiastically to the lots of French and English porcelain featuring motifs drawn from the tombs and temples along the Nile.

Over 30 years ago, Kevin Stayton, curator of decorative arts at the Brooklyn Museum, wrote an essay on “Revivalism and the Egyptian Movement” in connection with an exhibition – “The Sphinx and the Lotus” – at the Hudson River Museum. He said, “The mysteries and the majesty evoked by ancient Egypt have long occupied a secure niche in the mind and art of western man.”

“Indeed perhaps the greatest difficulty in defining an Egyptian revival in the 19th century is isolating a moment in history when the fascination with Egypt and things Egyptian is entirely lacking. Whether for its associations with exotic romance and absolutist power or for the purely aesthetic appreciation of its commanding forms and brilliant control of pattern, Egyptian art has played a role in Western culture since the Roman Emperors raided the land of the Pharaohs and re-erected looted obelisks in Rome …”

As the curator pointed out, Egyptian Revival is “The Thing That Wouldn’t Die.”

The Roman Emperor Hadrian, who ruled 117-138 A.D., decorated a wing of his Tivoli vacation villa like an Egyptian sanctuary. Artist Giovanni Battista Piranesi (1720-1778) illustrated how Egyptian motifs could be used in decorating the interiors of his own day. Architects from past to present have adapted ancient elements such as the obelisk, pyramid and pylon to fit modern purposes.

Although the relics of Egypt’s ancient civilization never completely disappeared, certain historical events brought the style back to the forefront of the public’s fashion consciousness. In the days before modern media, people were starved for accurate visual representations of far-off wonders. Fortunately, when Napoleon made his 1798-1801 expedition to Egypt, he took along artist Vivant Denon (1747-1825). His detailed drawings of monuments and scenes from daily life were published as Voyage dans la basse et la haute Egypte in 1802.

The overall result was passionate fervor for fashion, furniture and fine art featuring Egyptian themes which continued throughout the 19th century. The immediate effect on ceramics was the production of two massive Egyptian services at the French national porcelain manufactory of Sevres, under the leadership of Alexandre Brogniart.

A dessert service made for presentation to Czar Alexander I was sent to St. Petersburg in 1808 and now can be seen in the Kuskovo Palace, which serves as the Russian State Museum of Ceramics.

Empress Josephine had visited the factory during production and ordered a second Egyptian larger dinner service, to be paid for out of her divorce settlement. Eventually presented to the Duke of Wellington by a later monarch, the set is on display at Apsley House, his London residence. The plates from these services were carefully painted with Egyptian scenes after the Denon drawings. The deep blue and gold border designs feature ancient motifs including Horus falcons, scarab beetles and lotus flowers.

The specially designed serving pieces, such as sucriers, are further enhanced by handles and finials in the form of human or animal figures. Most notable were the sculptural centerpieces of white bisque, which depict architecturally accurate Egyptian temples and sphinxes. These services are among the most ambitious creative projects ever completed in clay.

The numerous smaller porcelain factories surrounding Paris quickly turned out their own cabinet plates painted with Egyptian scenes and patterns. Depending on the skill and imagination of the artist, some are more accurate, while others are decidedly fanciful. Pyramids rise at odd angles, sphinxes look more Renaissance than Middle Eastern and hieroglyphics are invented to fill space. The demand for exotic porcelain was extreme, and firms made money by putting their best decorators to work.

Across the Channel, Wedgwood – famous for fine Classical works – was encouraged to retool for Egyptian Revival by the 1801 British defeat of Napoleon in Egypt. The Rosetta Stone, which proved the key to the ancient Egyptian language, was put on display at the British Museum alongside other sculpture and artifacts retrieved from the valley of the Nile.

Wedgwood’s Egyptian designs are well-modeled and archaeologically accurate; they appear in the firm’s most popular wares. Collectors can find blue and white jasperware interpretations of the human-headed Canopic jars. Tea services were produced in a black and red ware called rosso antico; crocodiles form the finials. Black basalt ware, sometimes accented with gold, was used for elegant sphinxes.

While the most superb Sevres pieces are in museum collections, 19th century French and English porcelain in the Egyptian style was popular enough in its day that antique examples continue to appear at auction. Vigilant collectors can successfully locate and bid on desirable pieces at many price levels. 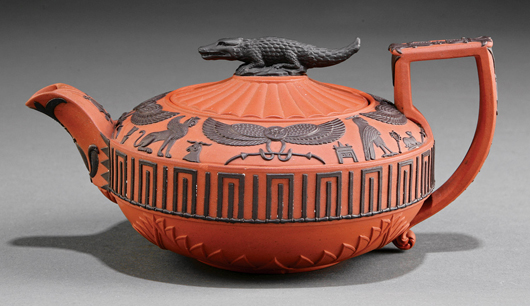 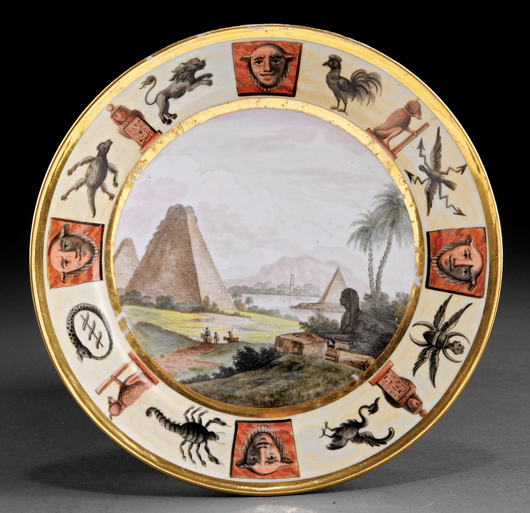 Responding to the passion for all things Egyptian, Paris porcelain decorators painted cabinet plates with scenes of the Nile. This example from the Lee Anderson Collection brought $2,868. Courtesy Neal Auction Co. 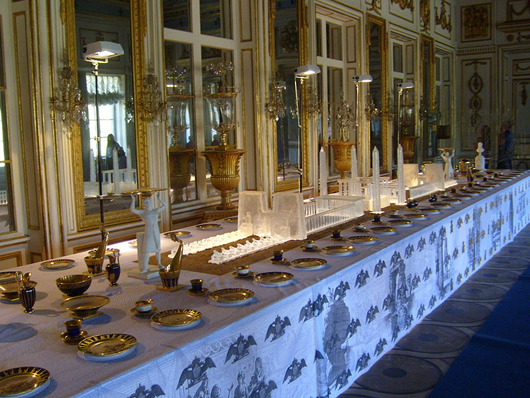 Sevres produced two elaborate porcelain services decorated with views of ancient monuments recorded during Napoleon’s 1798-1801 expedition to Egypt. One service, enhanced by a centerpiece of bisque architectural constructions, was given to Czar Alexander I and can be seen at the Kuskovo Palace Museum of Ceramics in Russia.

A pair of decorated cabinet plates with a russet marble border, marked by Paris porcelain makers Locre, Russinger, Pouyat, realized $5,079 at auction in September. The plate on the right features the Egyptian goddess Isis on a pedestal between two sphinxes. Courtesy Neal Auction Co. 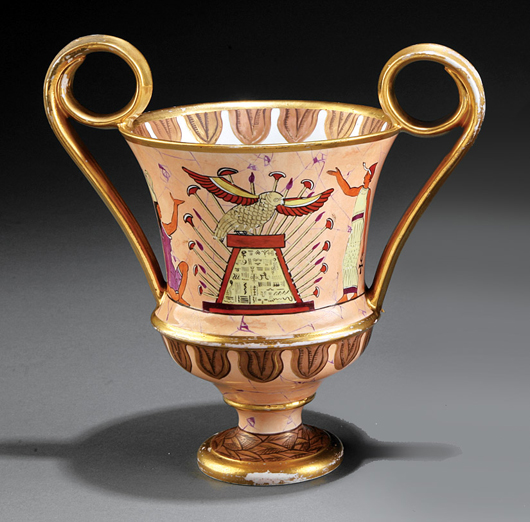 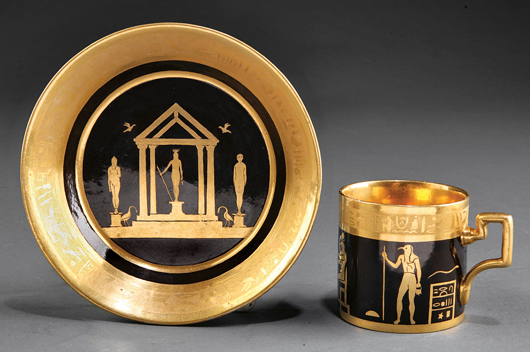 Enhanced by an intricate gilt border, this Paris porcelain cup and saucer with Egyptian deities against a dark ground brought $837 at auction. Courtesy Neal Auction Co.